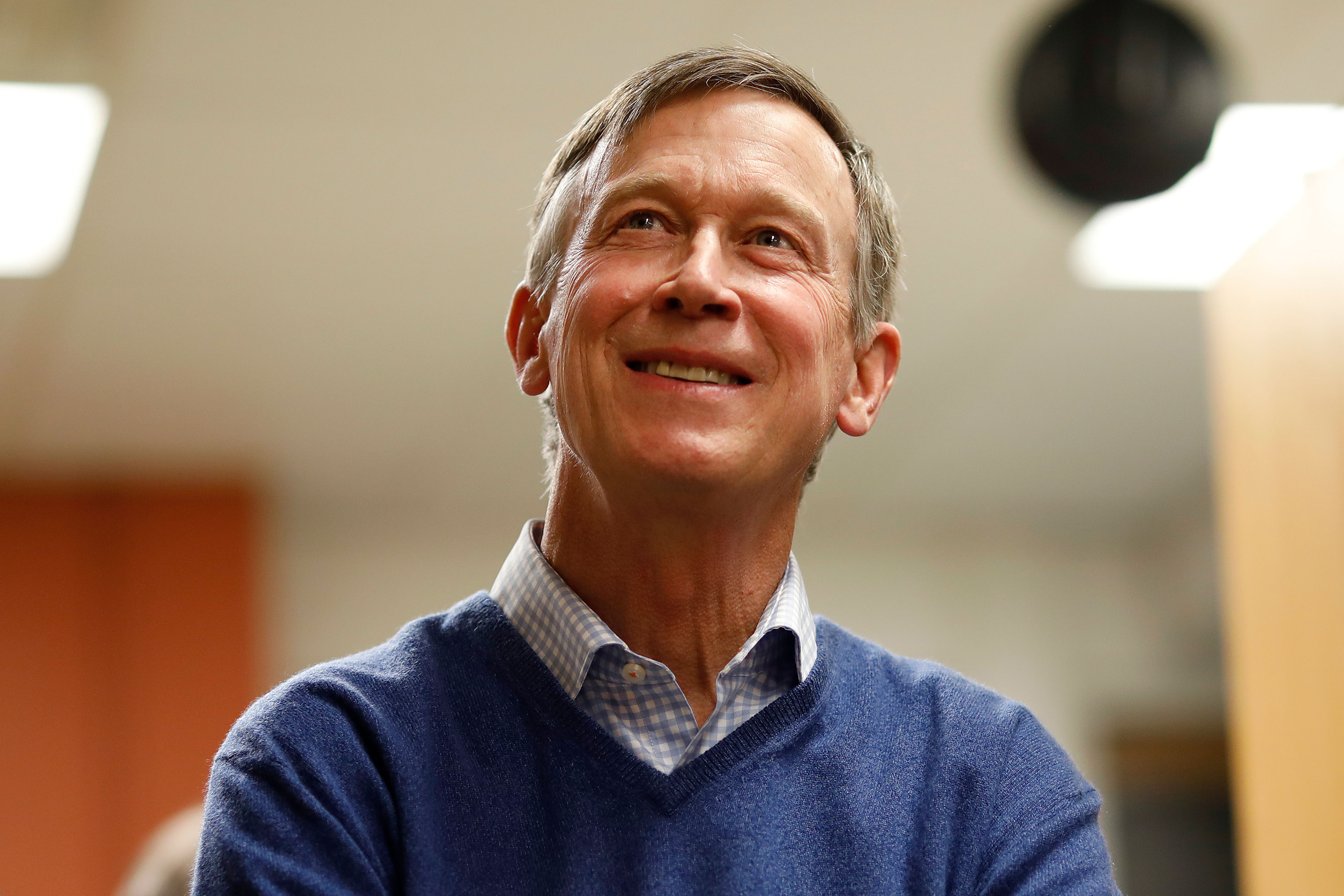 In a short video released Monday to announce his presidential campaign, Hickenlooper touts his accomplishments as governor, mayor of Denver, and as the founder of Denver’s first craft brew pub. His pitch: Washington, D.C. needs dreamers who can get things done.

“I’m running for president because we face a crisis that threatens everything we stand for,” Hickenlooper says as a picture of President Donald Trump appears on the screen. He later adds that he wants to “repair the damage done to our country and be stronger than ever.”

In an interview with CPR, Hickenlooper said the country is facing a “crisis of division.”

“I think we’re more divided than at any time since the civil war, probably,” Hickenlooper said. “And it keeps us from addressing the really large challenges we’re facing.”

Hickenlooper talked about providing universal health care and addressing climate change as issues that have been put on hold or ignored because of inaction from lawmakers in Washington.

Hickenlooper has been seriously weighing a presidential run for quite a while. Last fall he formed a Political Action Committee, called Giddyup, and took the first of many trips to Iowa. In recent months he has crisscrossed the country visiting other early voting states, as well as attending national and international events meant to boost his profile on various issues. One of his main themes on the pre-campaign trail was the ways he tried to bring people together as governor, a message he hopes resonates.

“With a divided legislature we got health care coverage for nearly 95 percent of all Coloradans. We lifted our rural economy as Colorado went from 40th in job growth to the number one economy in America,” says Hickenlooper in his announcement.

The two-and-a-half minute video also highlights his role in leading the state through tough times, including historic floods and wildfires as well as the Aurora Theater shooting.

“I promised Colorado families that we would rebuild our communities better than before, and that just offering thoughts and prayers would never again be sufficient.”

The video closes with Hickenlooper standing in the snow, a wintry view of Red Rocks Park behind him. It also reveals the logo for his campaign: abstract blue mountains, topped by a white star.

At events and in interviews, Hickenlooper often emphasizes his legislative accomplishments during his two terms as Governor, such as signing universal gun sale background checks and a ban on high capacity magazines into law in 2013. Those controversial policies led two Democratic state Senators to be recalled from office.

Yet, political observers caution that it’s Hickenlooper’s pro-business, middle of the road mindset that may not satisfy the more progressive voters in the Democratic base. During his time as governor, he generally avoided taking strong partisan positions, instead trying to promote a pragmatic approach to government. In Colorado, he ruffled feathers in some Democratic circles by strongly supporting the state’s oil and gas industry and opposing more restrictions on fracking.

Hickenlooper doesn’t see that image as a negative, but rather an opportunity to appeal to voters who are less ideological. He told CPR his message could also work in a general election to attract unaffiliated voters and disaffected Republicans.

“I don’t accept that label as middle of the road and moderate,” Hickenlooper said. “I think most voters reject those kinds of stereotypical categories as well. I’d hold our record up against anyone’s.”

He pointed to getting Colorado’s oil and gas industry to sit down with environmentalists to implement comprehensive methane regulations that are now being held up as a standard for other governments as proof that he can get two disparate sides together to compromise.

​Hickenlooper faces a potential opponent in President Donald Trump who is known for his aggressive tactics when facing political foes. Hickenlooper said he’s dealt with similar situations before, going back to his childhood as a skinny child with thick glasses.

“I know something about bullies and how they operate. And I’m not scared of Trump in the least,” Hickenlooper said. “There’s no nickname he’s going to come up [with] that’s going to surprise me.”

He said he has his own tactic to deal with potential aggression from Trump.

Hickenlooper is the second governor to join the crowded Democratic field. Washington State’s Jay Inslee announced his bid just three days ago. He said that what sets him apart from his opponents is that many of them have spent long careers in Washington engaged in a “debate of words” while he’s been focused on making his state function.

“I understand we need debate, but we also need doers,” Hickenlooper said. “I’m someone who, pretty much my whole adult life, has been spent bringing together talented teams of people and then working with them to accomplish real progressive change.”

The months of preparations before today’s announcement mean Hickenlooper has much of the infrastructure in place for a run. His PAC has raised more than one million dollars, and crucial campaign staff are said to be waiting in the wings.

Hickenlooper kicks off his official campaign Thursday night at Civic Center Park in downtown Denver. He then heads on a two day swing through Iowa, followed by a stop at the South by Southwest Conference in Austin, Texas.