“I had a peanut butter and jelly sandwich for breakfast,” Denise Presson said into the microphone, earning a mic check thumbs-up as she looked over her notes.

She’s co-host of “With(in),” a new podcast that interviews people serving time in Colorado’s prisons, as well as those who staff them. The podcast is also recorded, edited and hosted by people who are incarcerated.

Presson is a resident of the Denver Women’s Correctional Facility, serving a 42-year sentence for second-degree murder. She didn’t know much about podcasting before working on this project.

“It's something you subscribe to, other than that I had no knowledge,” she said. “I’ve been in prison for 10 years.”

But something she has noticed during her brief stint with podcasting is how vulnerable people have been in front of the microphone.

“You can tell that the guard drops,” Presson said. “I don't know if it's the setting if it's our energy, but it blows me away at how open people become.”

The “With(in)” team records in a vault at the Colorado Department of Corrections’ Denver Reception and Diagnostic Center that used to store medical records. The room’s lack of windows and concrete walls have made for a great makeshift sound studio, said Ashley Hamilton, executive producer of “With(in)” and founder-director of the University of Denver’s Prison Arts Initiative.

“We’ve never done this before, we’re figuring this out,” Hamilton said as she ticked off things to master like audio production, conducting interviews, structuring a podcast and the logistical challenges of working in a heavily controlled environment.

“We live in a society where you and I are used to pulling out our phones, getting whatever done that we need to get [done],” she said. “We're not working in that structure.”

Hamilton founded DU PAI in 2017, and currently administers arts classes and workshops in 10 prisons across the state. She hopes to have programs in every state prison over the next few years.

Over the 10 years that Hamilton has been doing prison education and arts work, she’s made it a personal policy to not ask about an incarcerated individual’s crime.

“Folks inside are reminded most moments of every day that they are in prison,” she said. “They don't need me to also do that.” 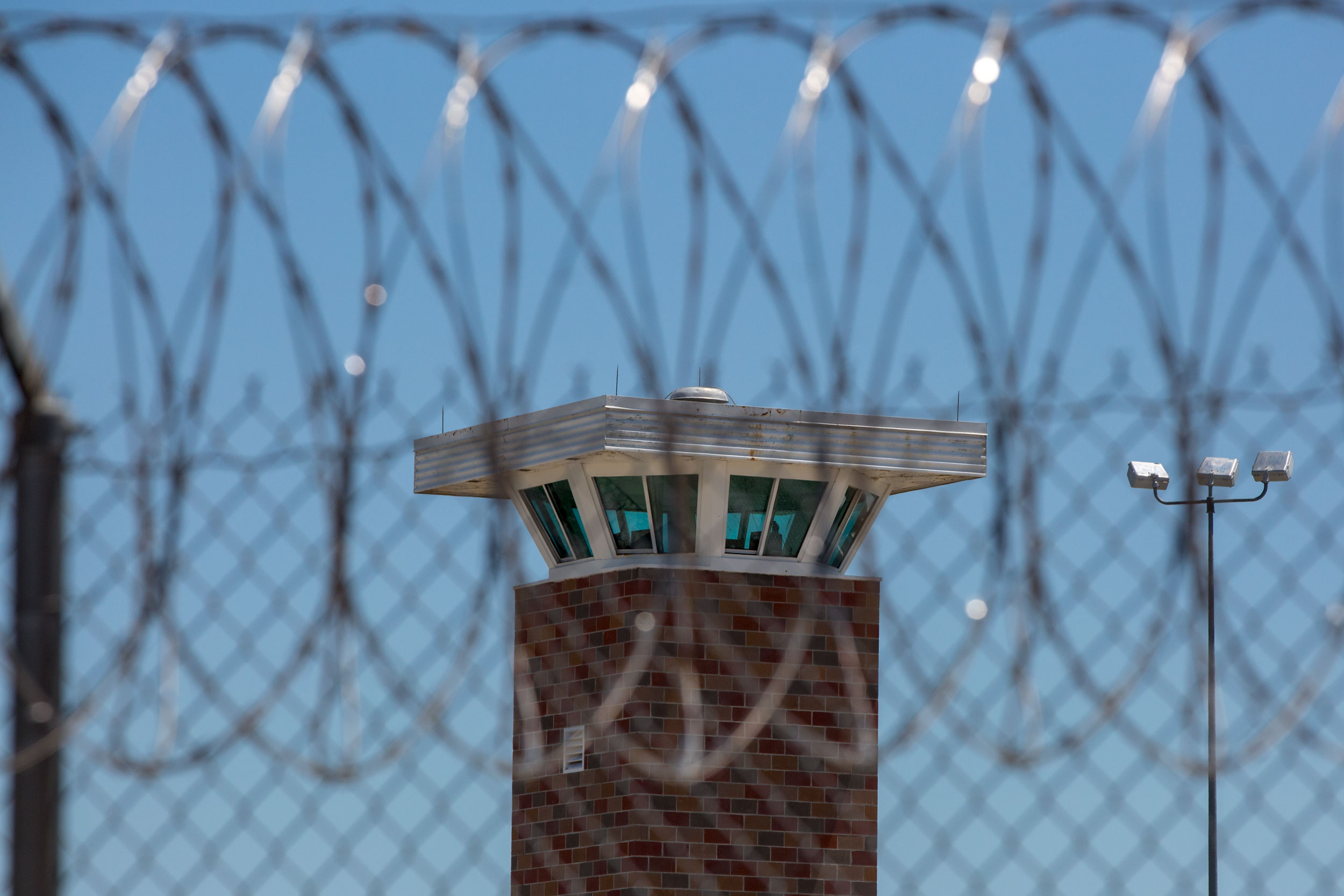 Hart Van Denburg/CPR NewsA select group of state prison system inmates are producing a podcast called With(In) through a program with the University of Denver. They interviewed Dean Williams, executive director of the Department of Corrections, on Tuesday July 9 2019. 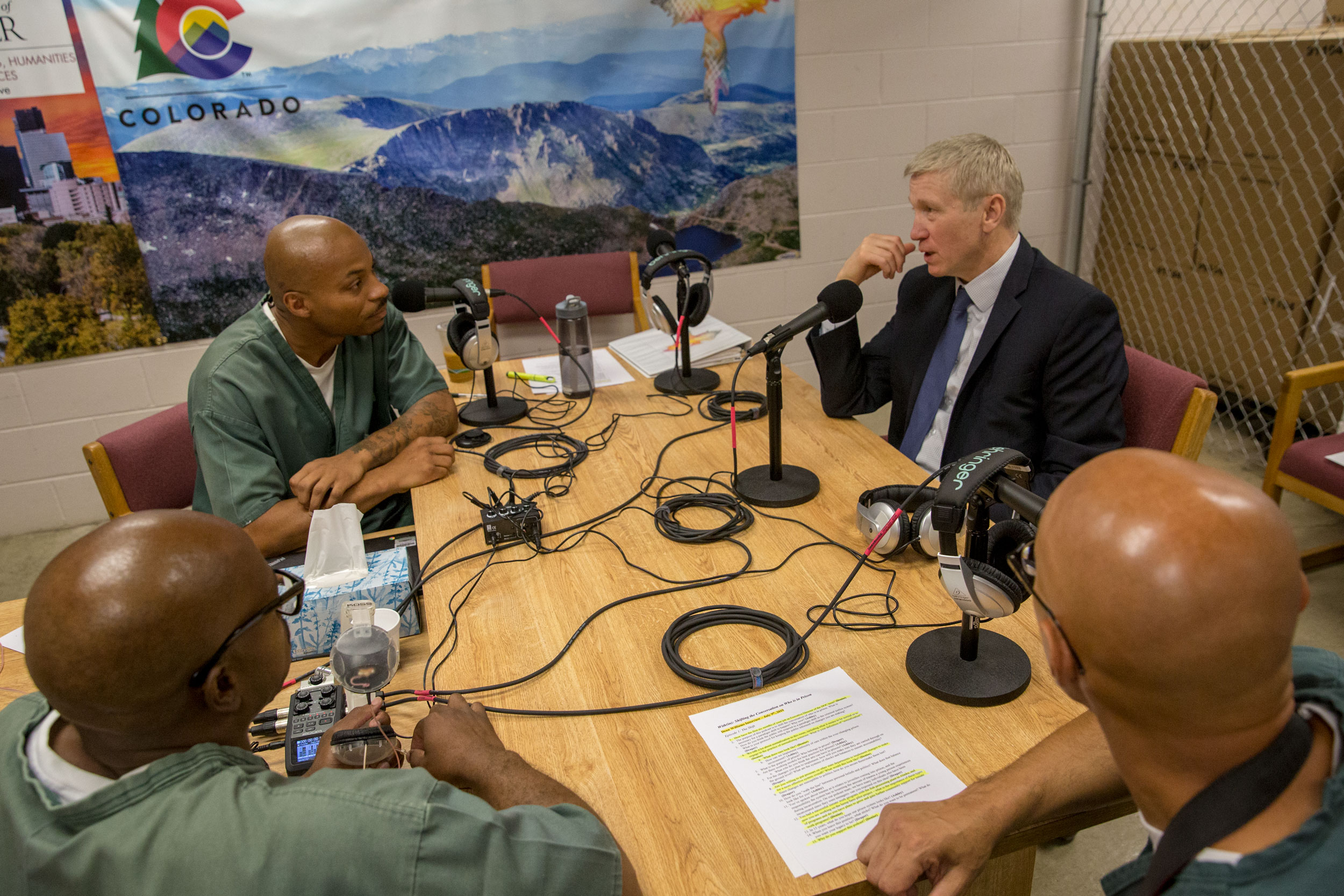 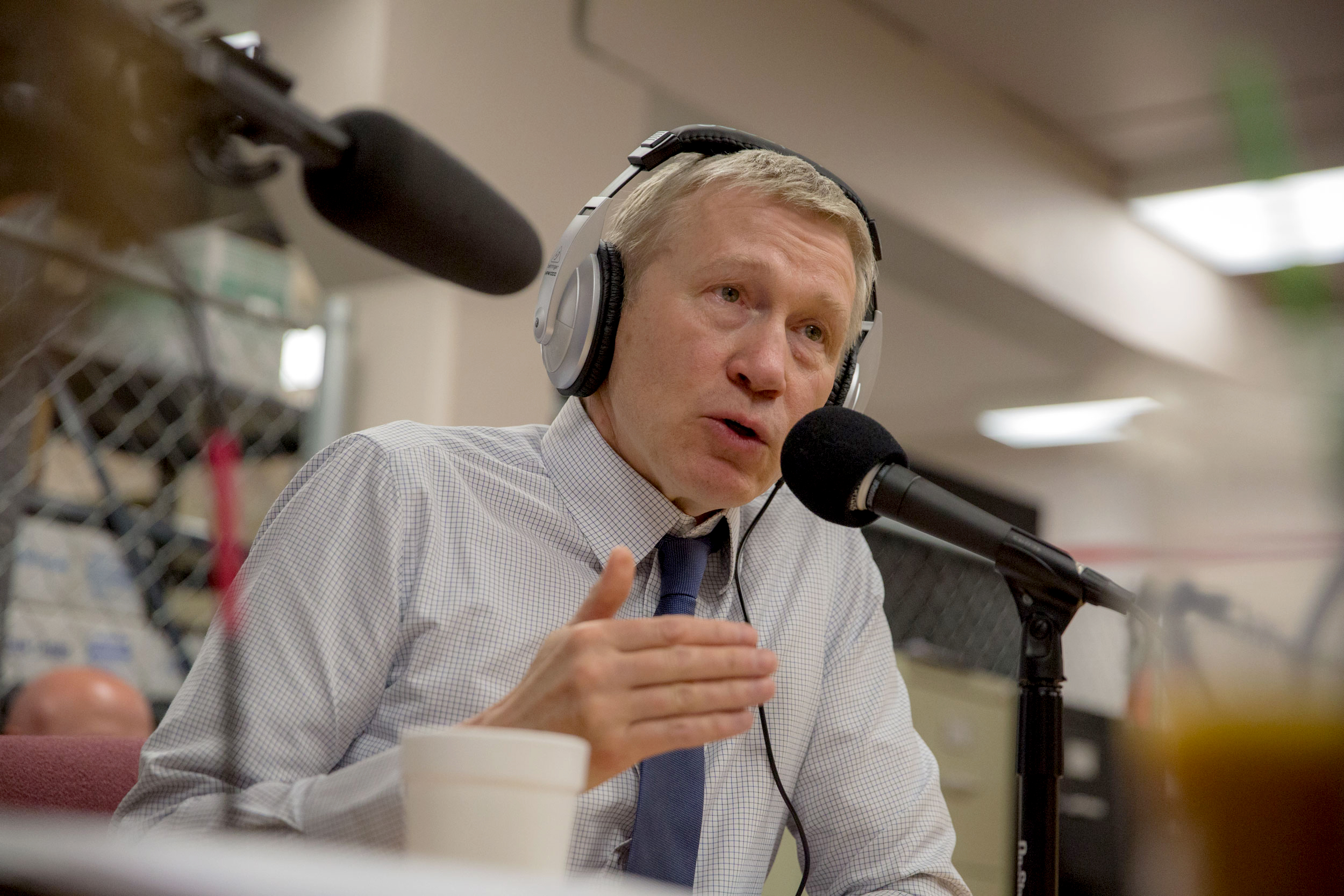 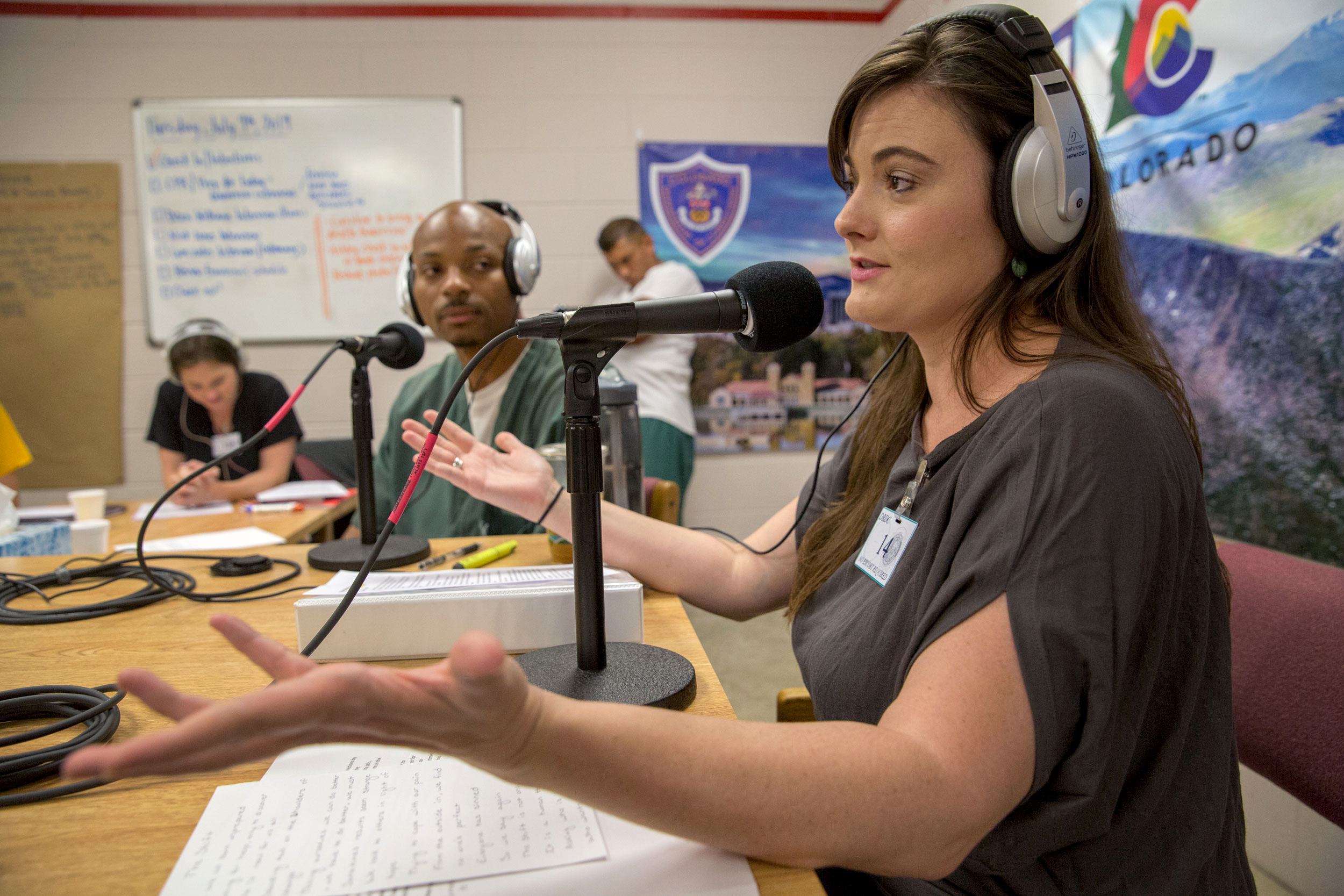 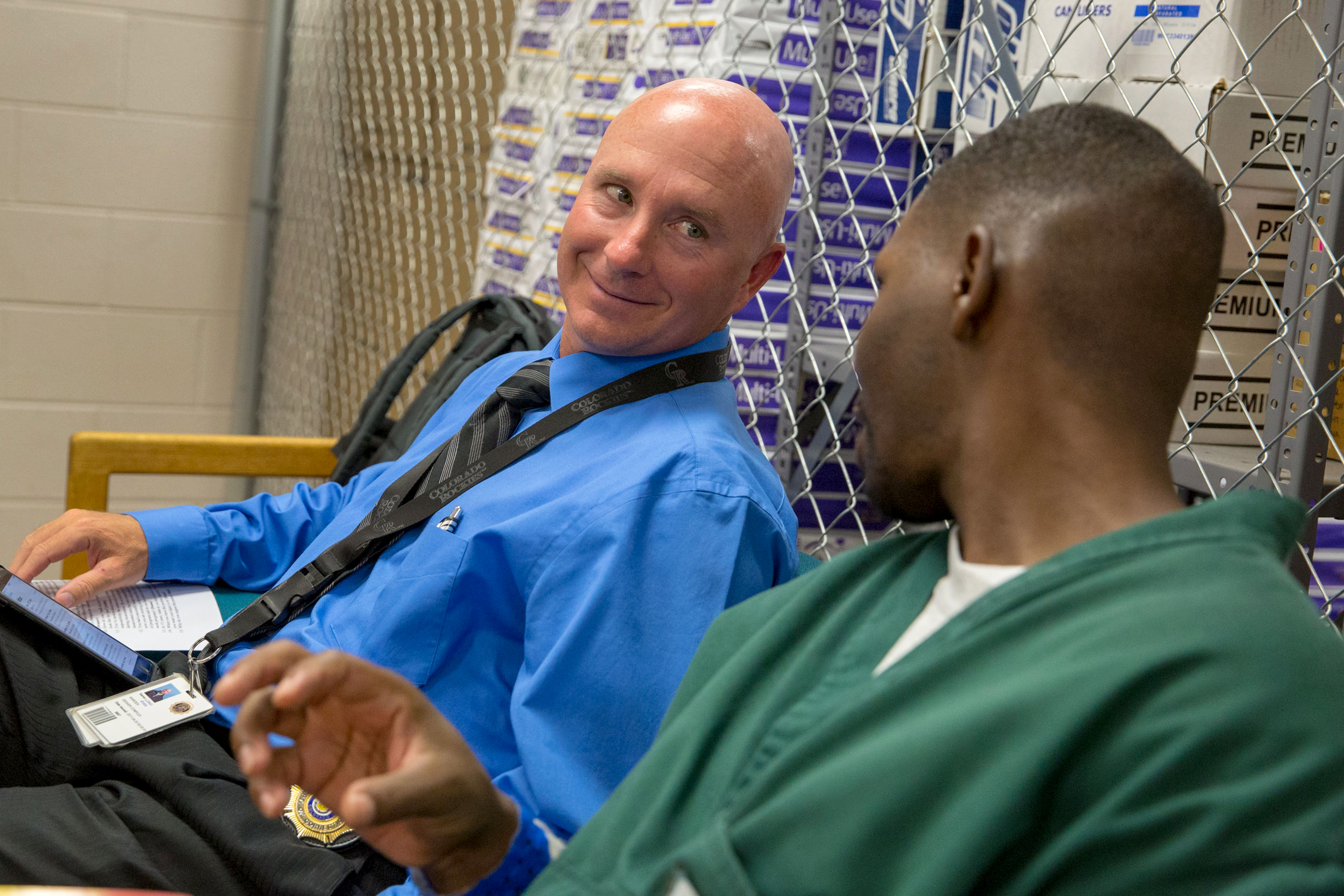 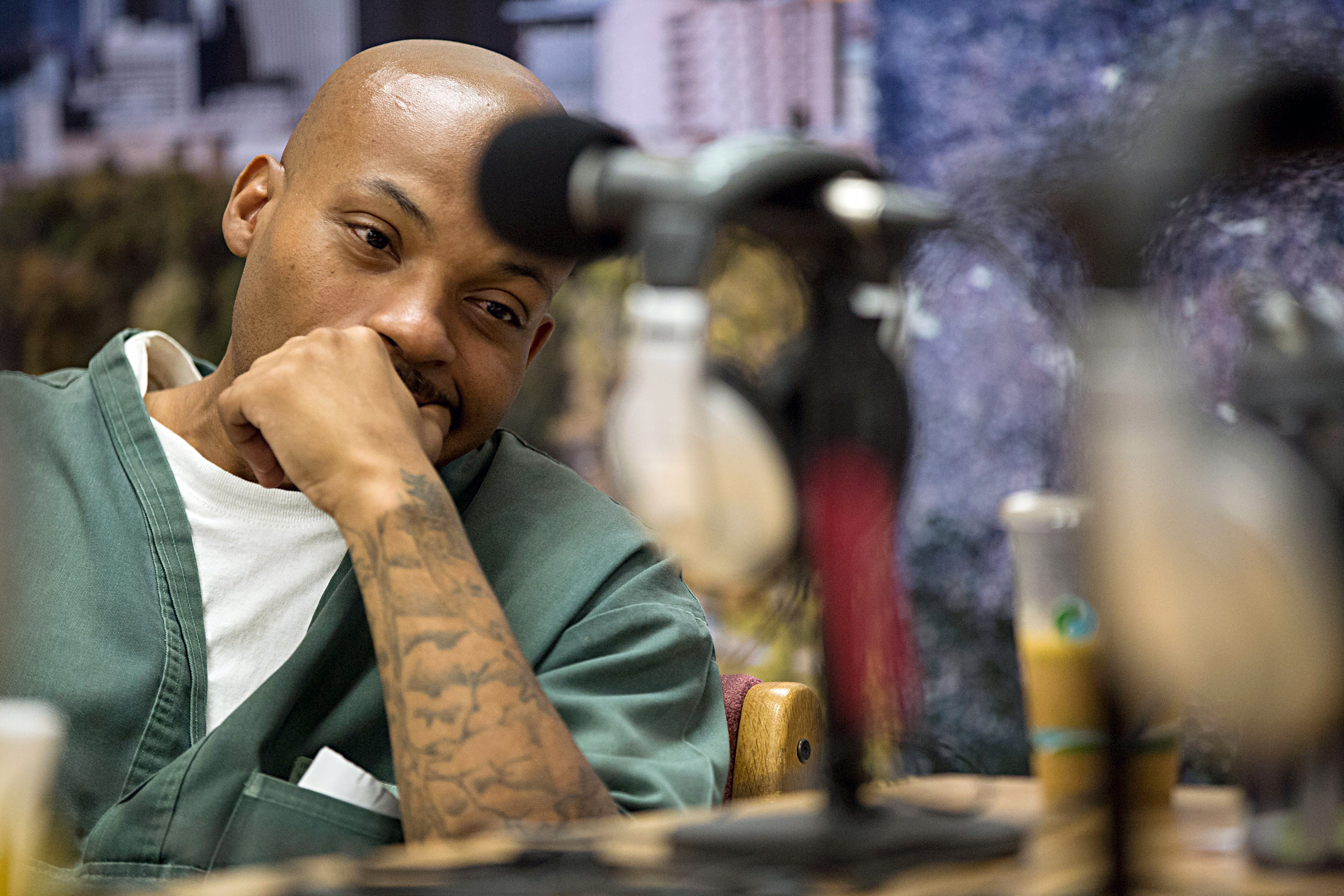 Hart Van Denburg/CPR NewsCo-host Andrew Draper listens as the crew discusses the to approach an interview with Dean Williams, executive director of the Department of Corrections on Tuesday July 9, 2019. Draper is a prisoner at the Sterling Correctional Facility.

The podcast team crosses facilities. Residents from Sterling Correctional Facility were transported to Denver throughout the summer to work in the same room as their female colleagues from Denver Women’s Correctional Facility. When they are all together, they’ll work a 10- to 12-hour stretch.

Hamilton felt it was important to have these different perspectives on the podcast.

Andrew Draper, co-host of “With(In)” and a resident of Sterling Correctional Facility, is 12 years into a life sentence for first-degree murder. He listens to podcasts and feels the medium has a certain power to it.

“It gives a voice,” he said. “There's an emotion and there's an energy that translates that you don't get through the written word.”

Draper had been interested in creating a podcast for some time. So it seemed serendipitous when Hamilton presented the idea to the Sterling facility earlier this year. After some discussion, they decided on an interview format that incorporates as many voices as possible into the podcast.

“I think that it is important to highlight another person's experience because their truth is their truth,” Draper said.

Many of the incarcerated people involved in this, or chosen for interviews, are living most of their lives here for crimes like murder, robbery and assault. They grapple with remorse and fear. They seem keenly aware of the sorrow they’ve caused, and wonder how to manage that with the life they still must live.

Presson spoke about “the responsibility in reparation” for her crime, “and then to move past that to where I can still live a fulfilling life, whether it's inside or outside of prison.”

The “With(in)” team has also brought prison officials into the conversation. In July, they interviewed Dean Williams, executive director of Colorado’s Department of Corrections,  appointed by Gov. Jared Polis in January.

The hosts had some meaty questions for the prison chief.

“What is the purpose of prison,” Draper asked. “And who deserves to be in prison after they’ve expressed change or have shown change?”

“I mean, this is a huge question,” Williams responded.

The incarcerated co-hosts nodded along as Williams told them that he thought the punishment should be “the loss of freedom.”

“Prison should not be a place of punishment,” Williams said into the microphone, emphasizing the “of” in his statement.

“If you’re a knucklehead here, then we have to deal with your behavior,” but prison should be a place for people to turn their lives around, he went on, that people serving time have to take ownership of what they did, but prison is the place they can make positive change.

Following the interview, Williams told CPR News that talking with the individuals working on the podcast “rattled him.”

“To see them emotional because we’re giving voice to something,” he said. “And what impacted me is I saw hope in their eyes where maybe hope didn’t exist before.”

Williams has witnessed people on the inside lose hope and it’s a “devastating human condition,” he said. That’s, in part, why the self-described theater geek wants to expand arts programming in Colorado’s prisons, whether that be poetry, visual arts, theater or podcasting.

“I think art has an incredibly important role behind the walls,” Williams said. “I think it humanizes the condition.”

He believes bringing experiences, like arts and culture, from the outside also helps people reintegrate back into society when they’re released. Because, according to the department, 95 percent of Colorado’s prison population will be released.

The DOC screens each episode, not for positive spin or censorship, but rather to ensure there are no security concerns or gang messaging within the content.

Season 1 of “With(in)” will feature 12 episodes and tackle some big issues.

One episode will look at the hierarchy of crime and how there are “different types of crimes that have different moral values.”

For another episode, they interviewed inmates on hospice care, as well as their caretakers, to discuss what it’s like to be dying in prison. Another episode digs into gang culture, “and the role that it plays not just in prison, but really in society as a whole,” co-host Andrew Draper explained.

Rehabilitation versus punishment — a subject the group talks about often — is another meaty topic.

“You’re never actually going to be called to do that work of looking inside if nobody ever asks you about your situation,” producer and DU grad student Caroline Sheahan said in a brainstorming session with the team.

In conjunction with the podcast, the team will put together a digital newsletter, “Reverberations from With(in),” full of essays and creative writing that dig into the same topics covered in the audio stories. Several Sterling Correctional Facility residents edit the newsletter.

Prison arts educator Ashley Hamilton hopes the podcast will break through stereotypes about prison, how it functions and what purpose it serves. Prisons are complex spaces, she said, “and there are folks here who have really important things to say.”

Co-host Denise Presson has given a lot of thought to who might listen, acknowledging that victims and families of victims might tune in.

“Nothing I do can bring my victim back,” Presson said, she adds she didn’t want to do this podcast to make excuses for what she did. “I do not ever want to discount the harm I've caused in my life.”

What she does hope for the podcast is that the public, “the people beyond the walls, can see that we are humans and that we are not just our crime.”

That’s the idea that inspires poet William S. Graham. For every episode, Graham, who resides at the Denver Reception and Diagnostic Center, writes an original poem. On the day that the head of Colorado’s DOC visited, Graham wrote a piece called “The Shift,” which begins:

“We are all born unprepared
Calling for help
Only to discover life is real for us all
Standing tall on the shoulders of change
Telling ourselves we can do better, we have to do better…”

They think doing this work on the podcast is helping them do better. And they hope it will inspire others within the system to do better as well.