When Samara Pepperell and Hilary Buscovick got engaged and started to make their wedding plans, they got stuck on whose name they should take.

“There have been so many people online that want us to do a combination name, Buscerell or Peppervick. And I'm just like, Nope, Nope, Nope,” Buscovick said. “You know, or the super lesbian thing to hyphenate a name. To me, that's also a shtick.”

They decided to take the decision to the rink.

On a cool Saturday evening, in Gunnison at the Jorgensen outdoor skate park, The Red Hot Chili Pepperells and the BuscoVicktors warmed up on the track surrounded by bleachers and chairs full of friends and family from all over the world.

It wasn't a trophy on the line for the teams — it was naming rights.

“Both names are cool,” Buscovick said. “I'm happy to have either one, she'll be happy to have Buscovick when it's all said and done and you know, we'll go from there. Isn't that right, Sam?”

They’re both Roller Derby players. Buscovick goes by Scald Eagle, and Pepperell by Lady Trample. If you ask their coaches and friends, they’re two of the best players in the world. Both have played for multiple teams and both have been named MVP players and competed in championship games.

For their wedding match, they recruited Roller Derby friends from leagues around the world to play on their teams, but also to referee, keep score, play music and announce the play-by-play. They even had two other announcers for a live stream.

“We actually fought pretty hard, tooth and nail, over the rosters,” Buscovick said. “Making sure that we had what feels like a very level playing field so that we provide a really honest bout, cause you know I want it to be the real deal.”

Currently, the twosome play for Denver’s official Women's Flat Track Derby Association team, The Mile High Club. The WFTDA is the international governing body for the sport. But they haven’t been together in Denver for long, Pepperell moved in the spring, and Buscovick moved back in 2017 — Gunnison is where she grew up.

The pair met in 2016 in Auckland, New Zealand, where Pepperell is from. Buscovick was recruited to coach a Roller Derby bootcamp, and Pepperell was hosting the coaches at her house.

“It was pretty much an immediate attraction and we haven't stopped talking since,” Buscovick said.

After Buscovick returned to the U.S., she lived in Portland and played for the Rose City Rollers. They started a long-distance relationship. Pepperell already had plans to move to Australia. There, she played for the Victorian Roller Derby League.

During a championship game in 2017, the two played against each other. They’re both jammers, which are the point scorers in Roller Derby, so at the beginning of each jam they fight against the other team and each other to breakthrough.

No one knew they were a couple until the end of the game when VRDL won the Hydra, the pinnacle prize for the sport.

“Most people were like, ‘Oh, Scald Eagle must be taking this hard, cause this is her third time competing for the Hydra,’” said Hope Brocaw, one of the coaches for Denver. “Actually, she just rushed over and hugged and kissed her girlfriend, and I think the Derbyverse lost their freaking minds.”

To see the couple play against each other was stressful, Brocaw said, but the game was amazing. She coached the Red Hot Chili Pepperells.

“I’ve been in Roller Derby for a really long time,” she said. “I skated for like nine years, and I’ve coached for a long time, but this is the coolest, just most unique event I’ve seen. So much love and so much togetherness. Today, my heart is full.”

For most of the wedding game, The Red Hot Chili Pepperells were in the lead at the half-time break. They’re both extremely competitive people, but they knew even then that they would be happy no matter the outcome.

“I love her last name. I think it's a really cool name. It's fun. It's like, it's got some fun sounds to it, fun letters, it's hard to spell, but whatever,” Pepperell said. “I love my last name and you know, I've had it my whole life and I'm very attached to it, but at the same time, you know, she thinks it's a great name and she'd wear it well.”

It was starting to look like the couple would be the Pepperells — until the last three minutes of the game when Buscovick broke through the pack over and over again.

In a flurry of skating and players knocked over, the game ended. The scorekeepers and refs conferred before the final score was posted: 200-197.

“It was amazing derby,” said Sandy Hall, Pepperell’s mother. “I think the biggest feeling I felt was just complete pride. What an awesome night they created for everybody, and how much fun everyone was having. It brought all the families together. That blew me away.”

Hall said she wasn’t sure who would win since the game was too close to call, but that she’s happy and proud that her daughter will take the Buscovick name.

“We didn’t stop you one single bit,” Buscovick said to Pepperell. “Very proud of the display my teammates and your teammates put on for this tiny town in the middle of nowhere, but the middle of everywhere right now, I love it.”

Pepperell was tired, but happy and looking forward to their wedding day.

“Today was like the big day that we’ve almost been putting more energy in and focus on than the wedding,” she said, “but tomorrow we just get to really celebrate what this thing is really all about which is love.” 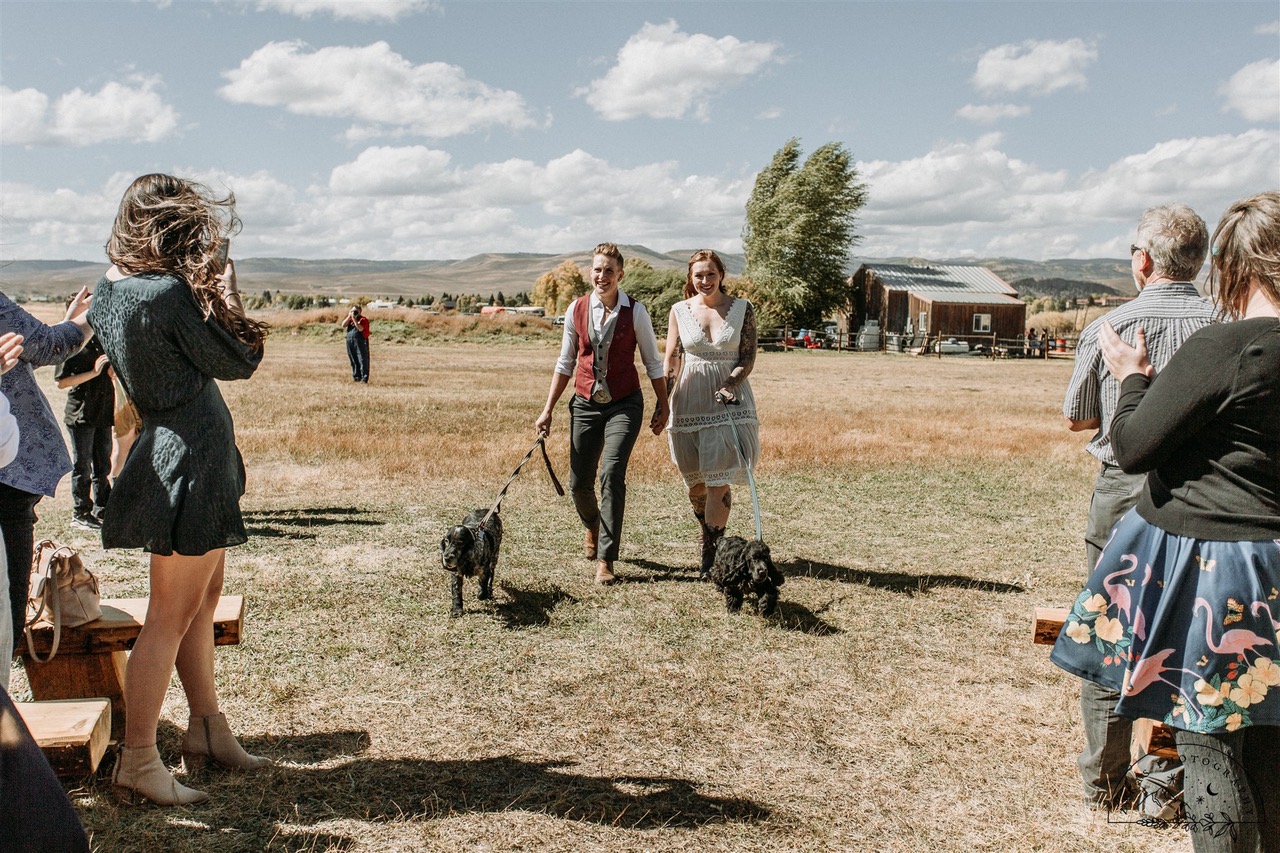 Zakas PhotographyHillary Buscovick and Samara Pepperell walk down the aisle in Gunnsion, CO. on their wedding day, Sept. 29, 2019 with their dogs, Danni and Janet. The couple played a Roller Derby game the night before to choose their last name -- Pepperell took Buscovick's name. 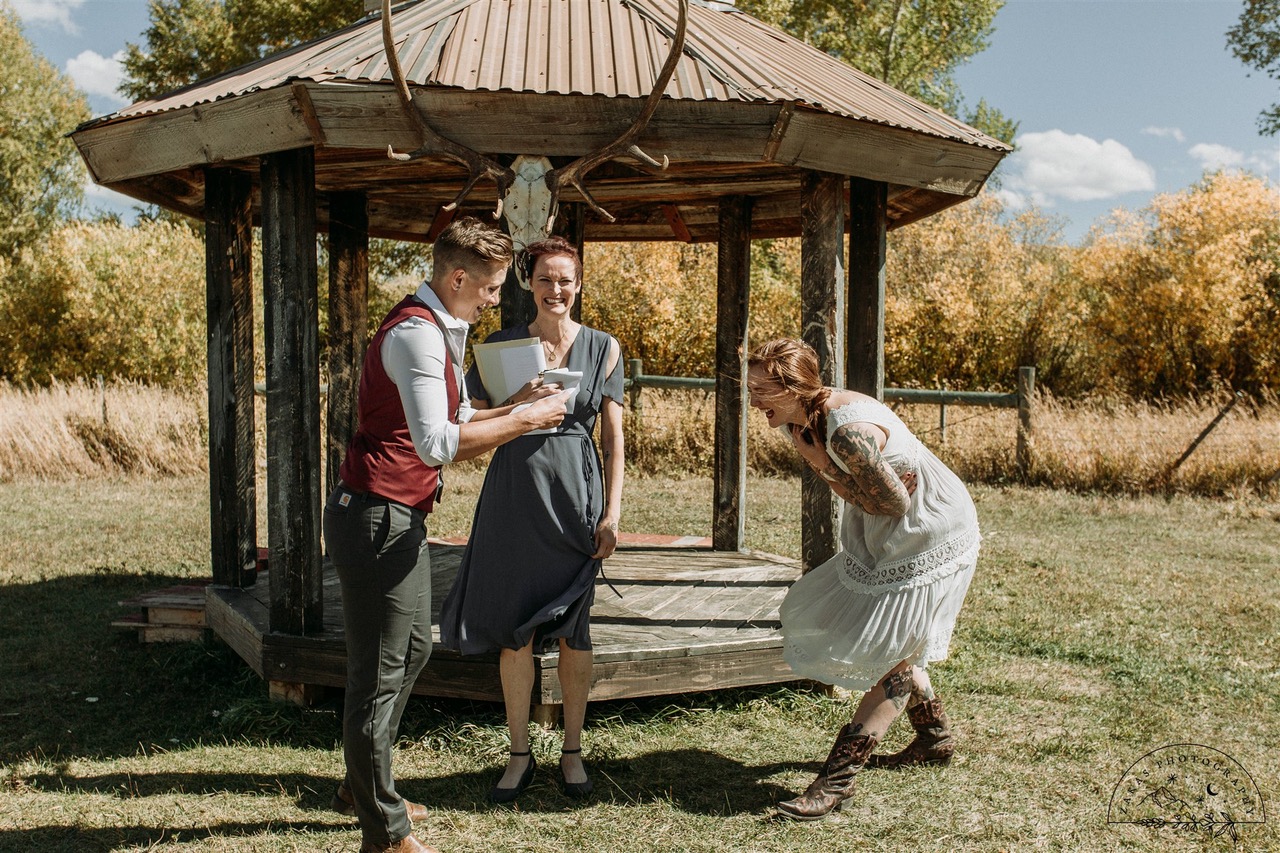 Zakas PhotographyHillary Buscovick and Samara Pepperell married on Sept. 29, 2019 in Gunnison, CO. The night before, they played against each other in a Roller Derby match to choose their last name. Pepperell became a Buscovick. 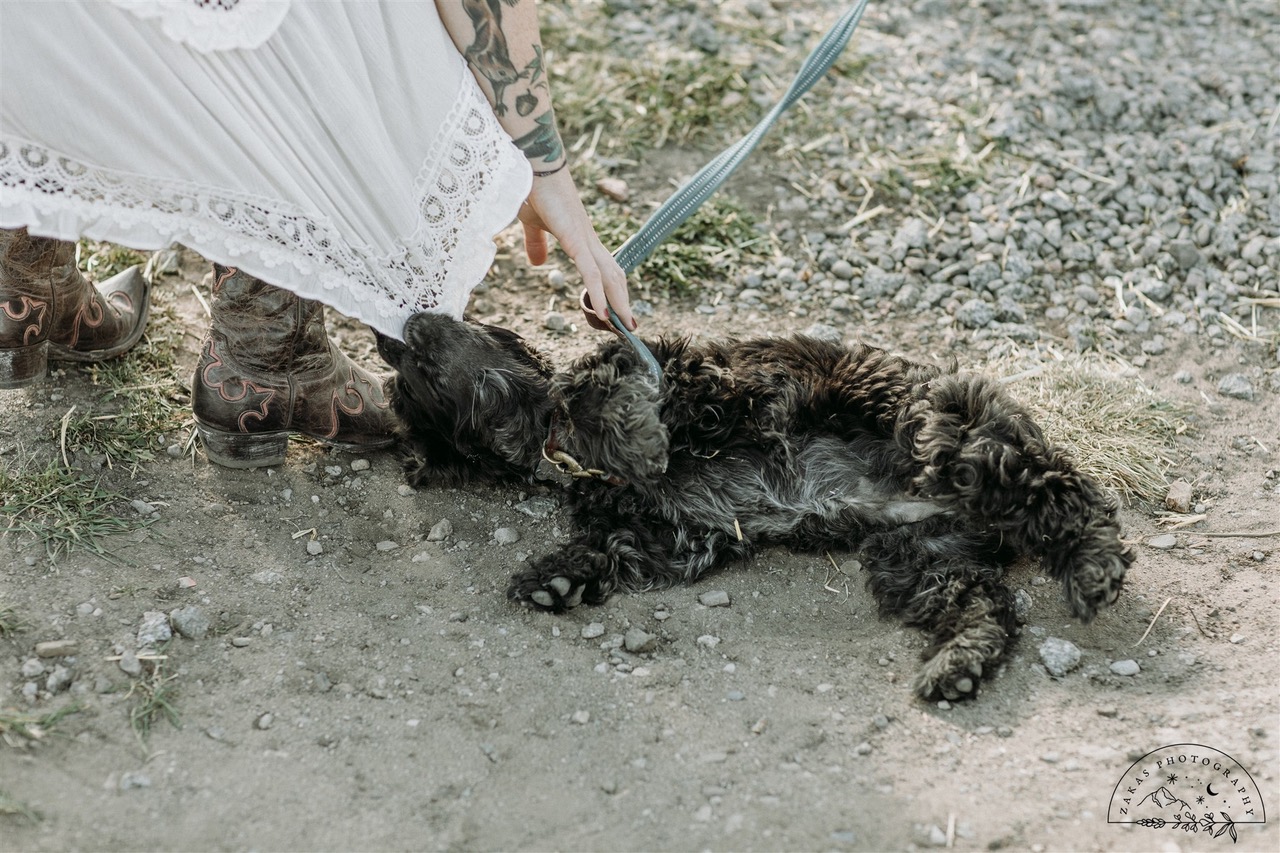 Zakas PhotographyHillary Buscovick and Samara Pepperell's married on Sept. 29, 2019 in Gunnison, CO. The night before, they played against each other in a Roller Derby match to choose their last name. Pepperell became a Buscovick.

At every step, Buscovick and Pepperell crafted their wedding weekend to reflect what’s most important to them: family, friends and Roller Derby.

The next day they walked down the aisle with their dogs, Danni and Janet. And now, they’re finally together in the same place, playing on the same team, as the Buscovicks.