Right before Thanksgiving, the CPR newsroom packed our laptops and office plants and moved from Centennial to Denver's Capitol Hill. Rooms are labeled with post-it notes for now, and we still have trouble finding coffee mugs, but it's home.

Like many a new homeowner, the fresh digs got us wondering about the history of the property. What was at 17th Avenue and Grant Street before a 12-story office building that now houses a local news operation?

Turns out, this was the site of a French school. And Denver's first vertical motel. And a Playboy Club.

The documented history hidden in a plot of land in Denver goes at least 150 years, to the 1860s, shortly after the city was founded in 1858. Those records live on thanks to the Denver Public Library.

You can search through their online archives, but not everything has been digitized, and some information will require an in-person visit to the Western History Collection. You'll also get to see an archivist — like Katie Rudolph, who helped us — cracking open some really big, really old books of Sanborn Fire Insurance Maps. 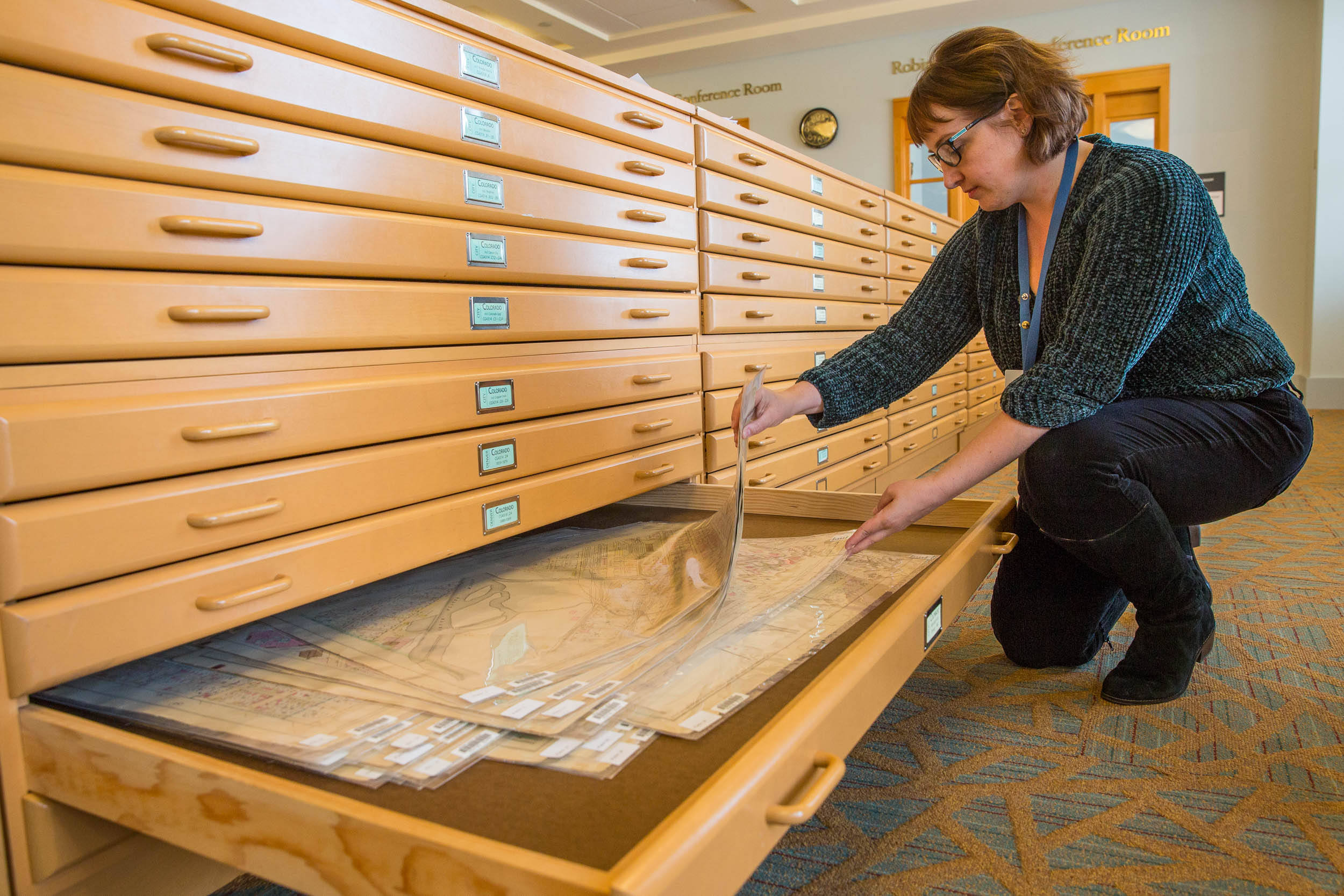 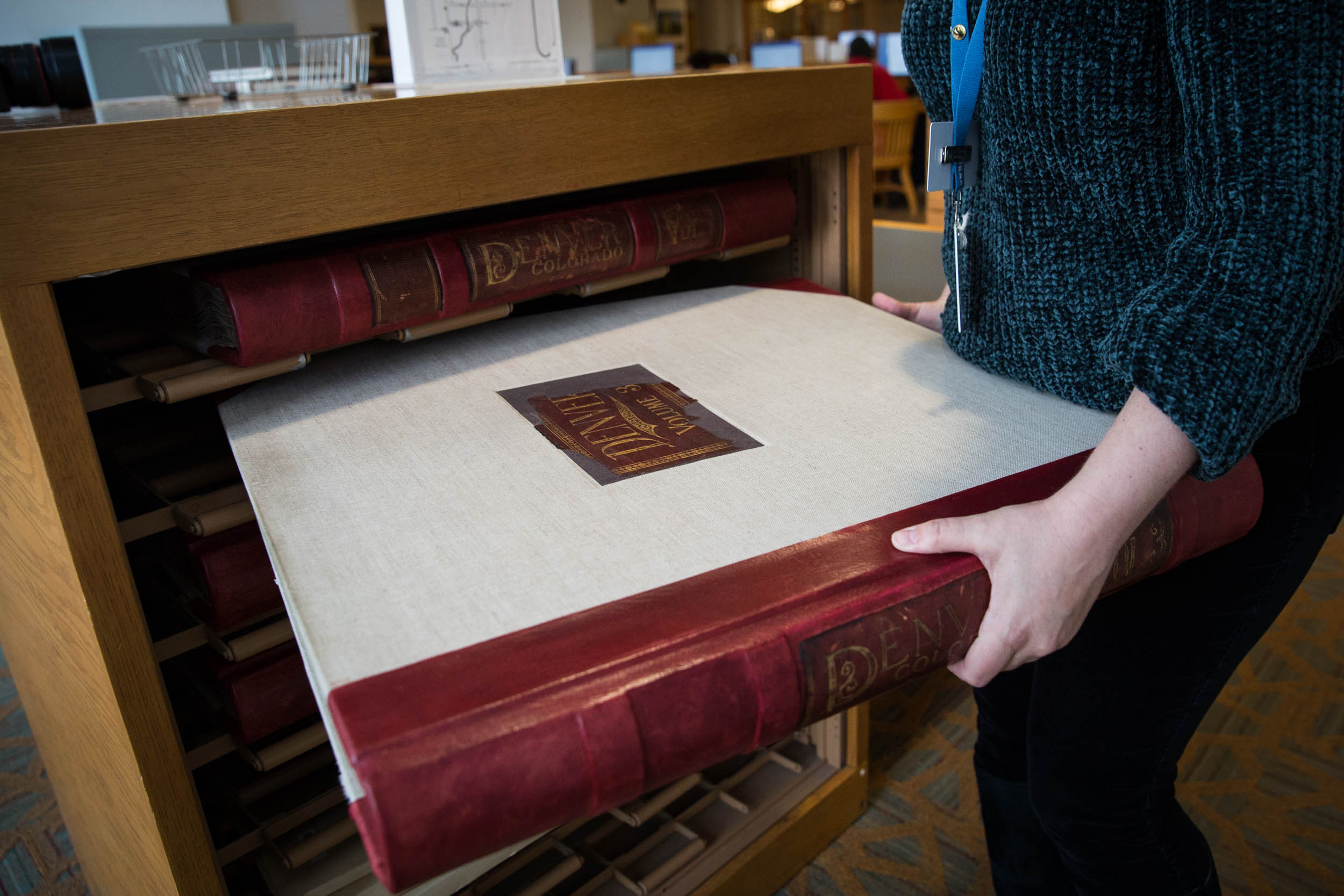 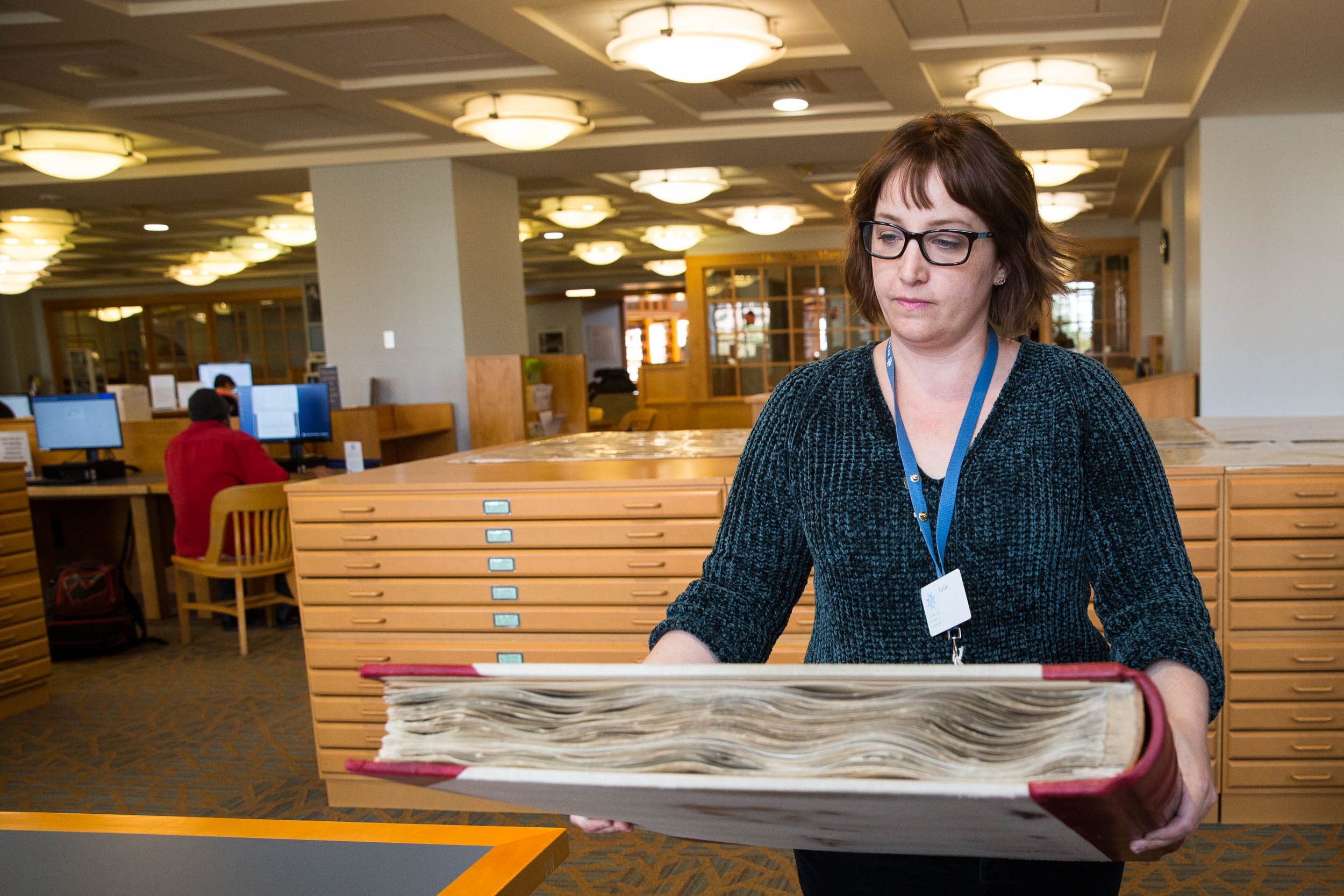 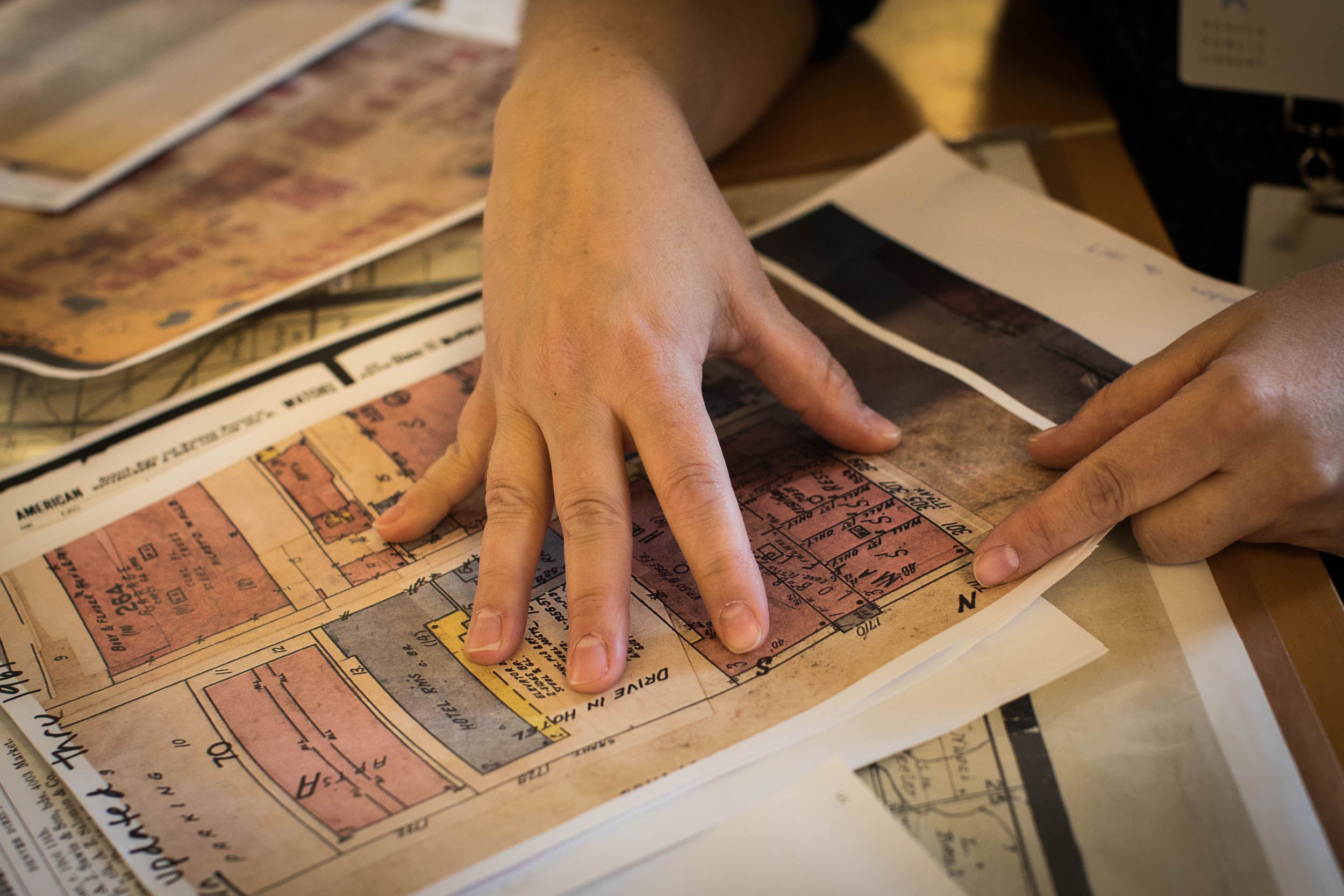 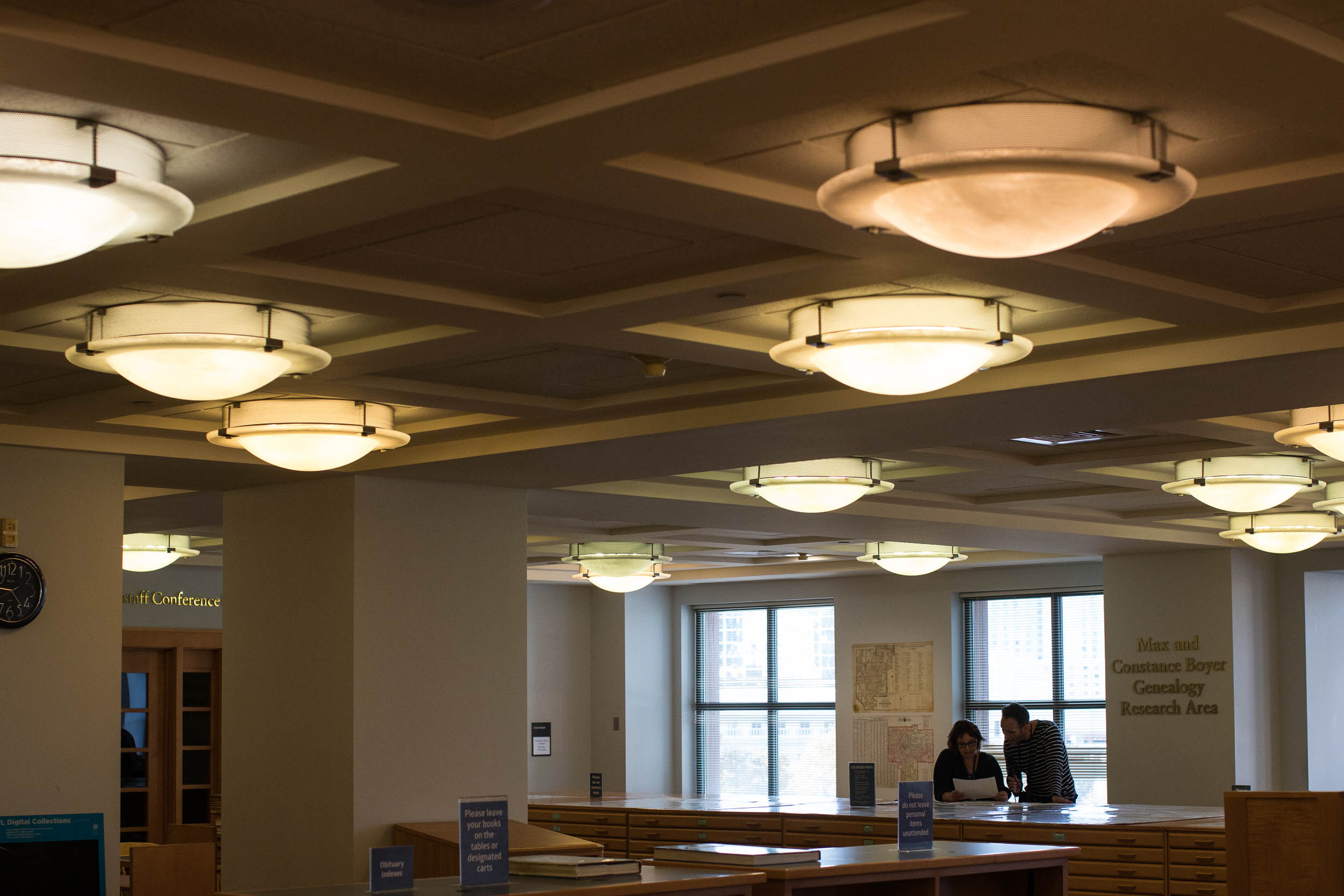 "They're these giant books that people love to see because it's something out of Harry Potter," Rudolph said.

Anyone in Denver can try and track down the secrets in their address with the help of these library resources. Here are some tricks to keep in mind if you go digging, too.

When revisiting Denver's early days, don't expect to find too many permits on file.

It was, fittingly, a little Wild Wild West out here.

In the late 19th century, building permits would've documented the architect, the construction company, the first owner and even cost. But we didn't find many for the first few structures on the land that eventually saw CPR's office building.

"It's not that unusual, because Denver is a newer city [back then]," Rudolph said. "Maybe people are getting around the permitting process, or the record is just not there.”

But those gaps, when pieced together with the facts we do have, can be telling. Rudolph found an advertisement from the Rocky Mountain News in November 1890 for the Denver School of French Language at our address.

So when evidence of the French school disappeared and no permit emerged for a building that replaced it, Rudolph knew to keep hunting elsewhere.

“And then you know it becomes an apartment building again. No permit," she said.

Atlases of old-time Denver are your friends. But not everything will look familiar

We learned a lot from two old maps of the young Mile High City: The Robinson Atlas in 1887 and the Baist Atlas in 1905. Both are searchable online.

Both show a large, blocky building colored pink — meaning it was built from brick — with five smaller, yellow structures — meaning they were wooden — behind it on our plot of land.

"They show the footprint of each building. So you really get the shape of the building and then they're color-coded too," Rudolph said.

The Denver Public Library has cool, interactive versions of the atlases on its website. Go play around with one or both.

That said, it's nice to have an archivist like Rudolph to guide you through these maps. Not only because they're jam-packed with details, but also because street names and even house numbers can and did change. Relevant to us, 17th Avenue at one point was Brown Street.

Your newspapers of record live up to that name

When it comes to tracing the highlights of a plot of land, the headlines really do tell a bigger story.

The library archives include records from the Rocky Mountain News and Denver Post relevant to certain subjects. In our case, that included a big mid-century hotel called the Mayflower Towers Hotel.

The Mayflower was the "city's first vertical motel", according to a headline in the Rocky on Jan. 11, 1956. The Mayflower Towers were built as an addition to an older, preexisting hotel. The remodel was complete by April 1958.

"Its owner upgraded the hotel and built the motel next door, which was considered very chic for the late 1950s," Rudolph said, since motels capitalized on a booming automobile culture.

Two years later, on the day before Halloween, bandits stole $950 worth of something. And in 1966, the Mayflower Towers Hotel became the Hyatt House as management signed on with the Hyatt Corporation.

Not long after, the location became known for something a little more scandalous than bandits. A Playboy Club was started at the top of the hotel in late 1967, and the Rocky advertised searches for "bunnies" and girls" in the city. A 1968 profile in the Denver Post's now-shuttered life and culture magazine Empire detailed what "the care and training of bunnies" took.

The headlines (bunny-related and otherwise) die down until 1981, when the Denver Post's architecture editor writes about a "new Capitol Hill office structure" that will rise 12 stories and be finished in "red marble imported from Verona, Italy." That building still stands today, as CPR's red-marbled home.

To learn about the people who lived at your property before you did, get ready to do some reverse searches

It's unlikely you'll know the name of a stranger alive in the 1800s. But you just need your address to learn about their lives.

City directories detailed who lived where in Denver over the years — and they're also partially available online. When Rudolph looked for 1700 Grant Ave., she found Daniel Letcher.

Remember how the plot of land where our office building is had one large brick structure and five smaller wooden ones?

"Maybe they were constructed really hastily, maybe workers were living there," Rudolph said.

One of those wooden structures was Letcher's home, and he was indeed a worker. His listing in an 1892 directory calls him a "col'd lab," short for colored laborer.

We took Letcher's name and found more information on him with the help of Census records, like how he was married in Colorado Springs to a woman named Georgia Lewis.

The directory, like all the documents Denver Public Library staff used to research the history of our address, is packed with small details. It's amazing to see what jobs were like back then, from professional solicitors to veterinary surgeons. All the nooks and crannies are packed with ads for leaf oils, home insurance and brass bed frames.

“There are little details in this directory that I love," Rudolph said.