About a thousand people gathered in Aurora Thursday night to hear Democratic presidential candidate and Minnesota Sen. Amy Klobuchar make her case for bringing decency back to the White House.

She made her pitch at the same time President Donald Trump held his own “Keep America Great Rally” an hour away in Colorado Springs.

Among those who came to see Klobuchar were many voters who were undecided on which Democrat to back, while their ballots wait at home, still blank. They don’t have much longer to make up their minds though; Colorado’s Super Tuesday primary is on March 3, less than two weeks away. 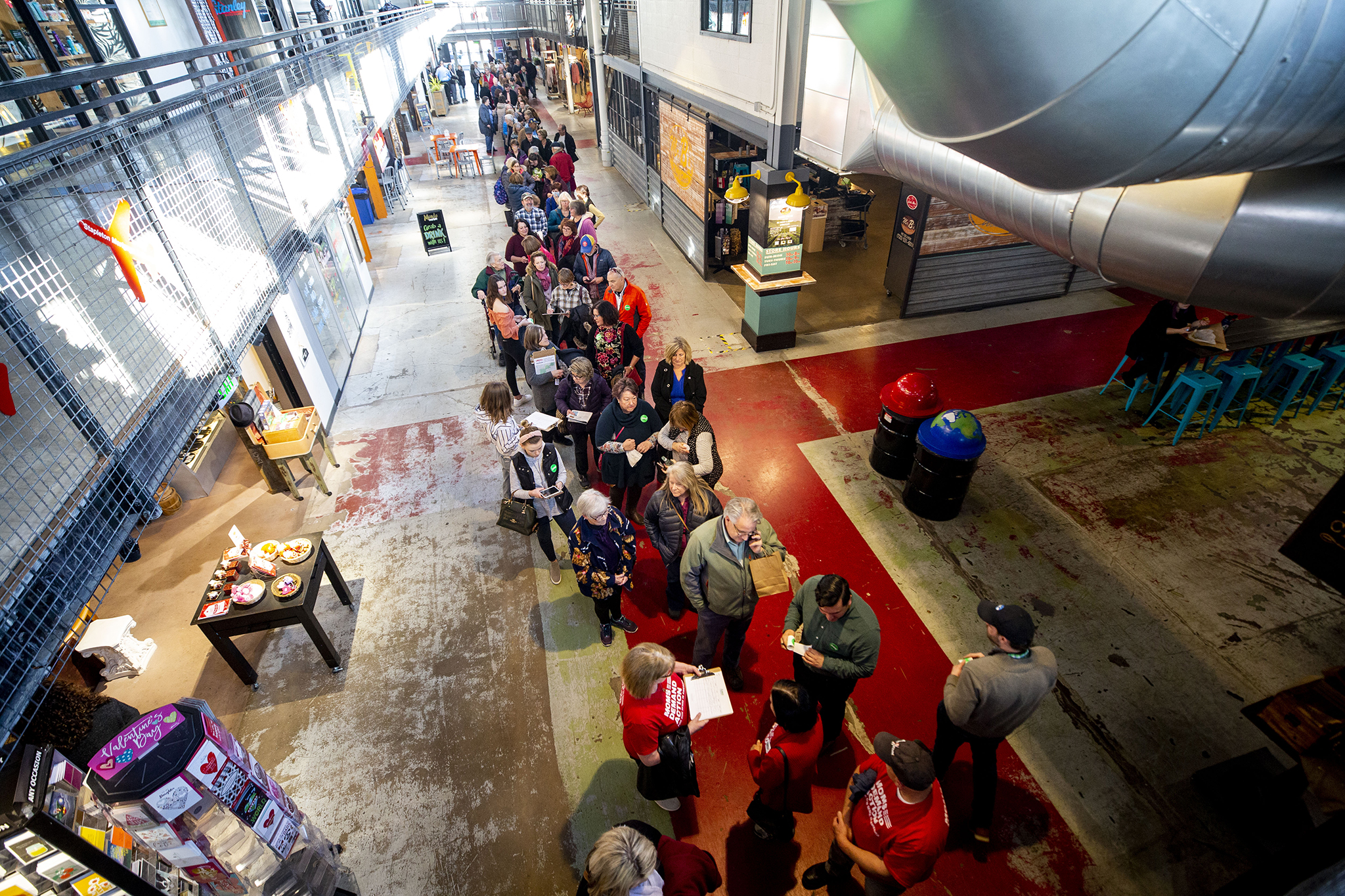 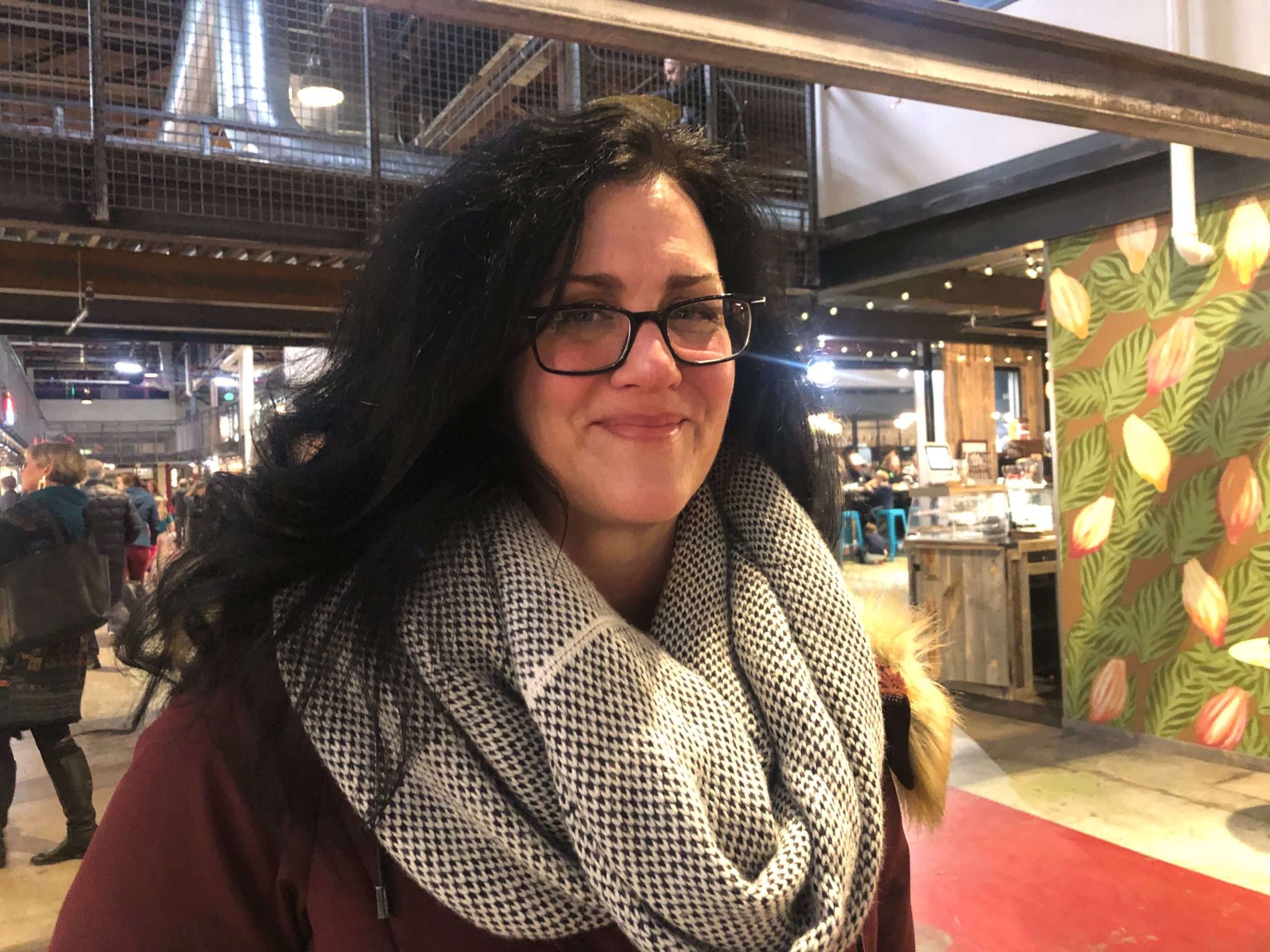 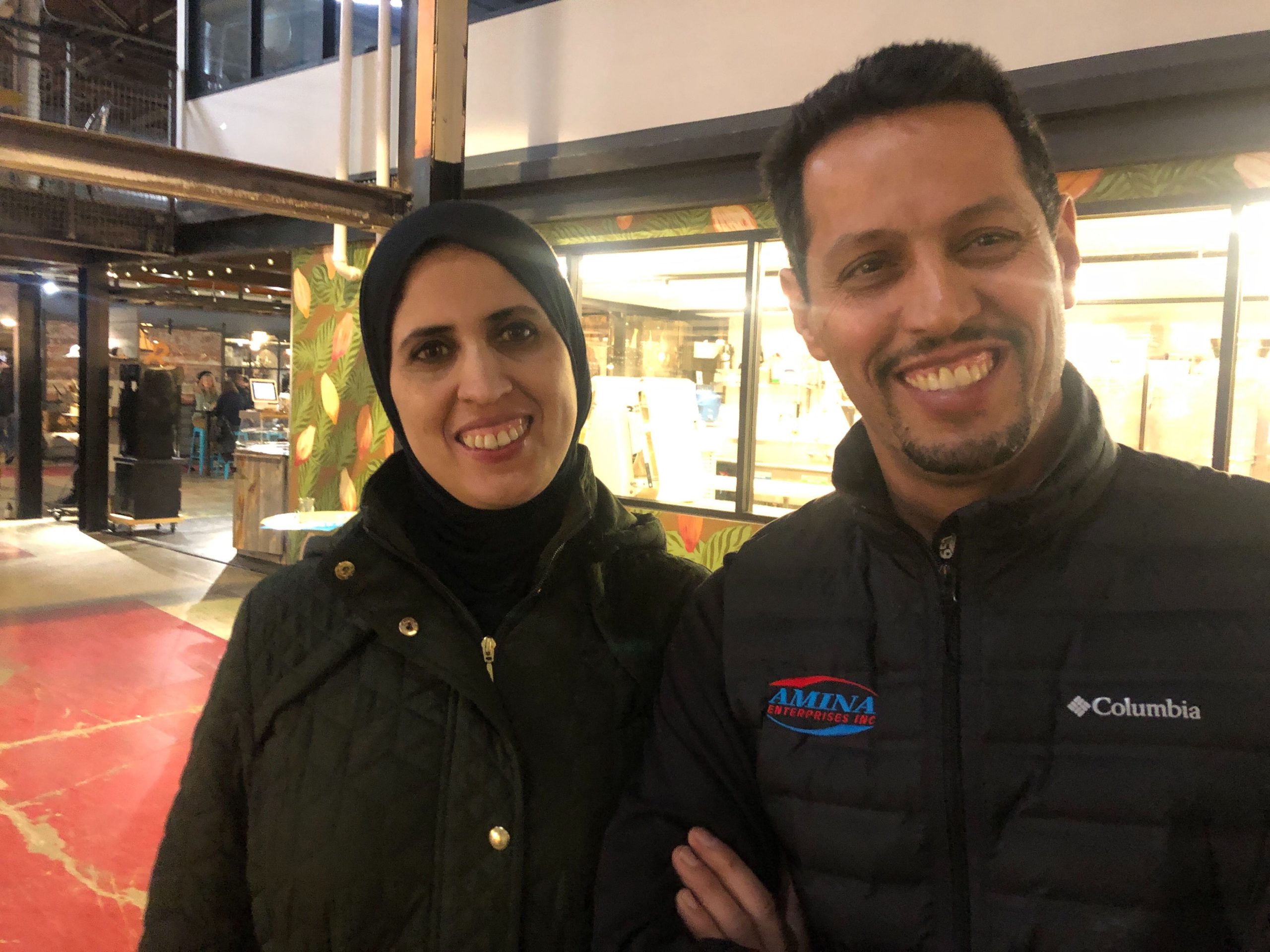 Bente Birkeland/CPR NewsMohamed Mouaddine and Malika Omari came to see Se. Klobuchar speak at the Stanley Marketplace in Aurora. Mouaddine's main desire is to see the Democratic party unite around a single candidate. 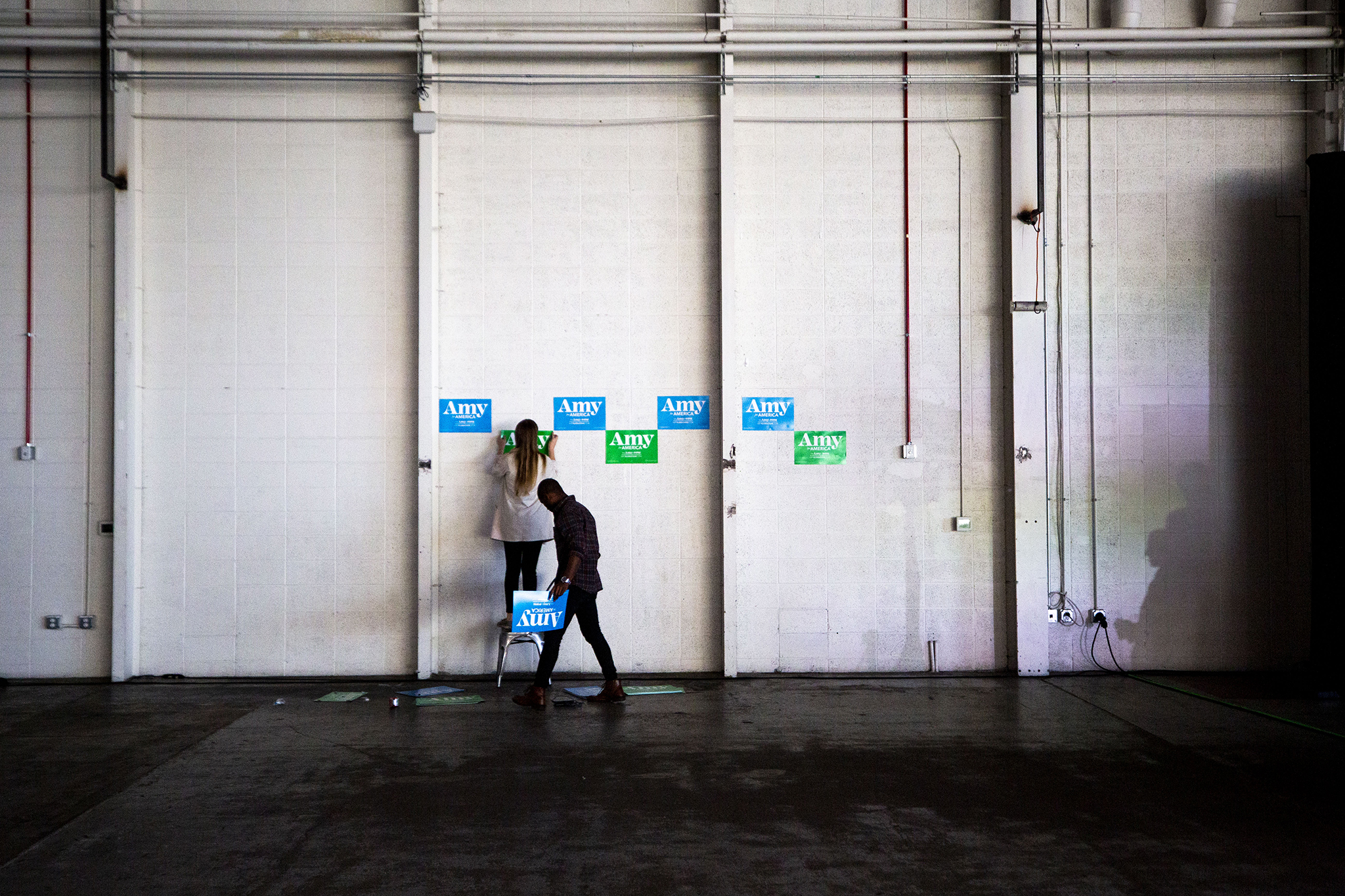 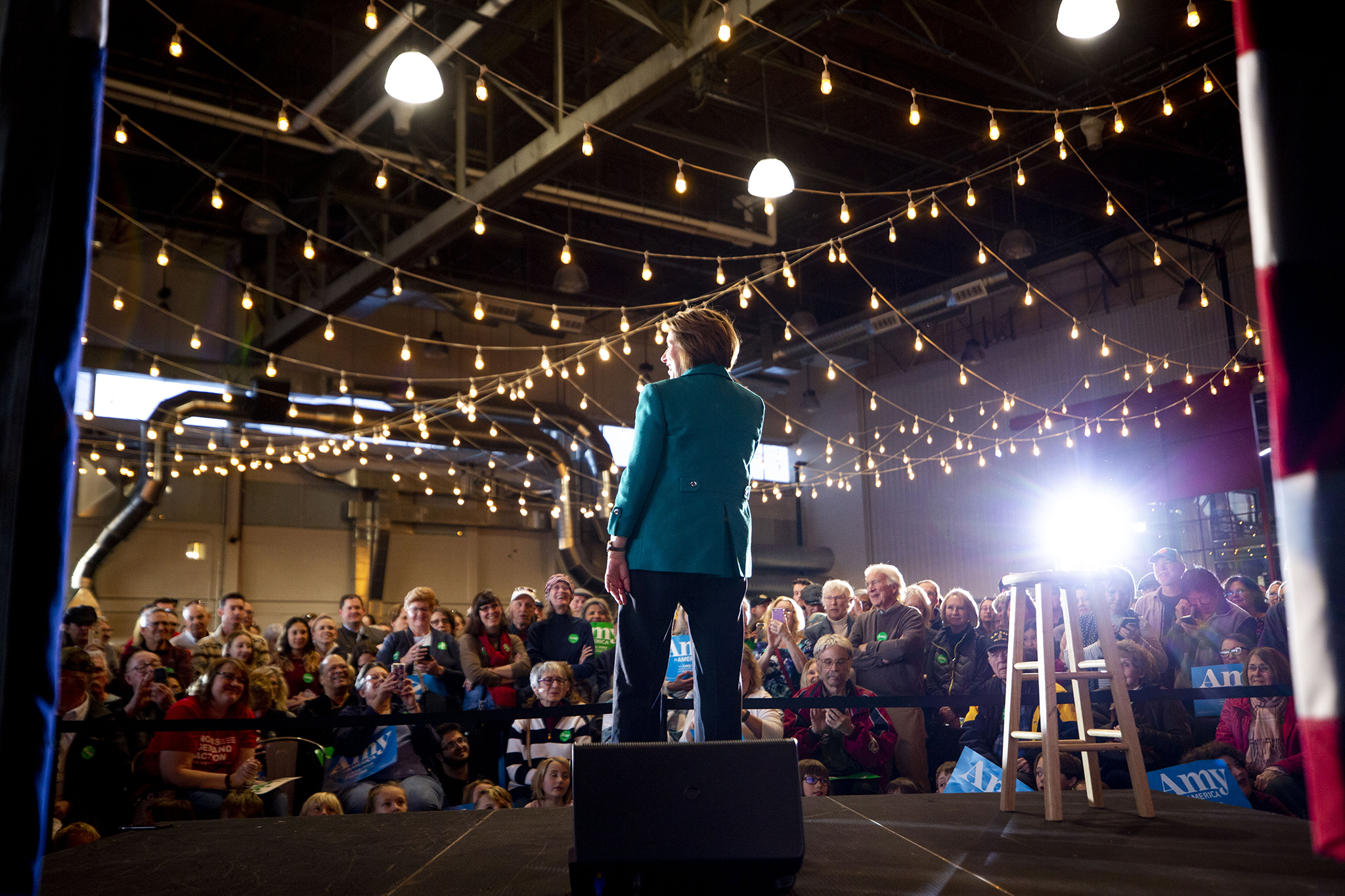 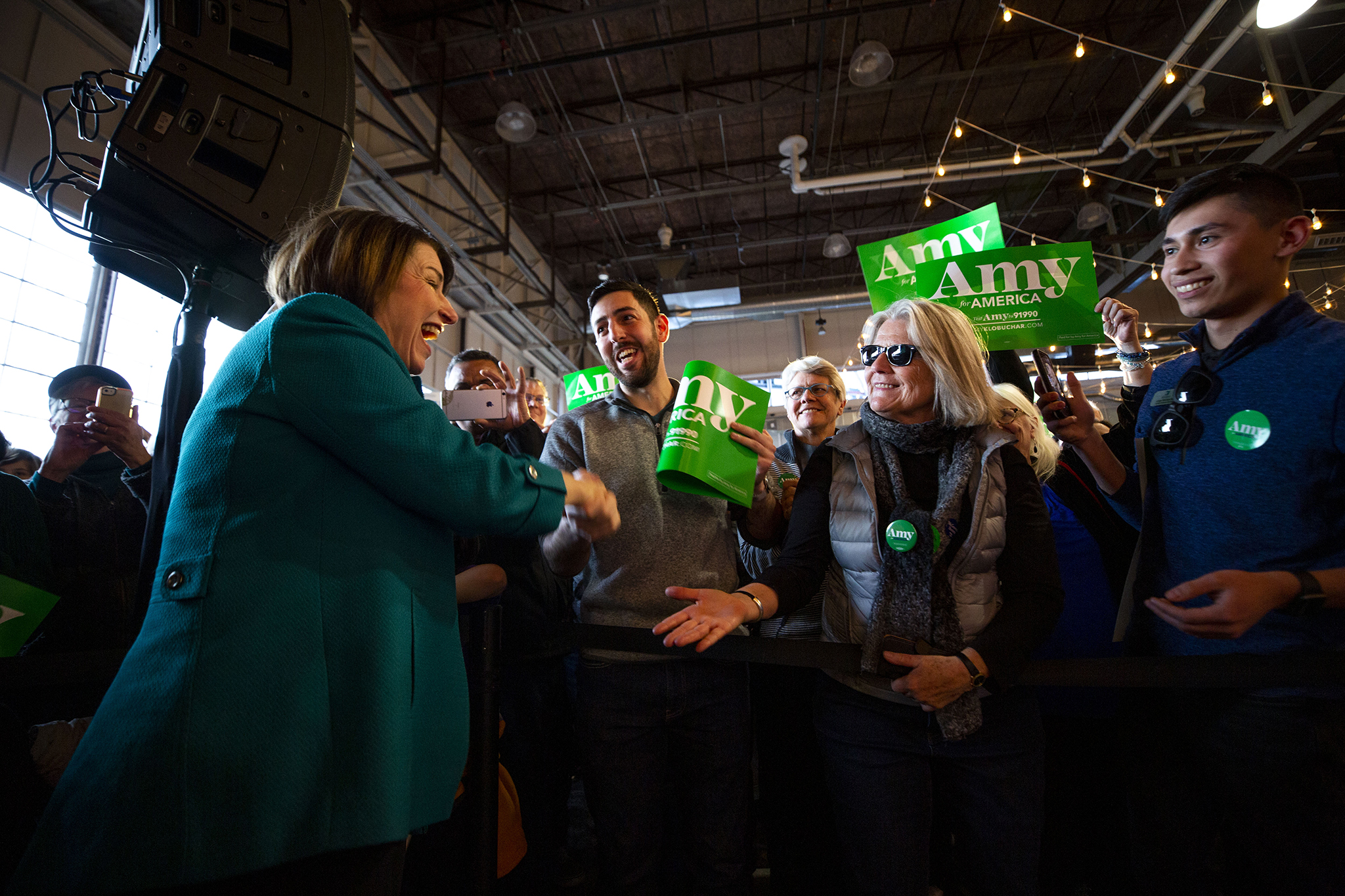 “Quite frankly, my number one thing is who is electable,” said voter Ann Pitinga, who said her choices were between Klobuchar, Massachusetts Sen. Elizabeth  Warren and former New York Mayor Michael Bloomberg in the primary. “My top issue is: beat Trump.”

Until a few weeks ago, Pitinga was a registered Republican. She said she switched to unaffiliated the same day the U.S. Senate rejected a call for additional witnesses in President Trump’s impeachment trial, calling it “the last straw.”

When it comes to the general election, Pitinga plans to vote for whoever is the Democratic nominee, although Vermont Sen. Bernie Sanders is her least favorite of the candidates.

“I think that the people who didn't vote Republican because they didn't like Trump are going to see the term socialist and that's going to make them say, ‘well, I'd rather have Trump than a socialist.’”  Herrera said.

Klobuchar has been on his radar ever since her high-profile exchange with U.S. Supreme Court Justice Brett Kavanaugh during his confirmation process. Herrera said Klobuchar and South Bend Mayor Pete Buttigieg, who will be in Colorado for an event on Saturday, are his top choices.

During a roughly 40 minute speech at the Stanley Marketplace, Klobuchar mostly focused on her own background and agenda, and not on Trump. She talked about growing up in Minnesota and the special kinship she feels to Colorado because “it’s a little bit like Minnesota with mountains.”

The location the campaign picked for the event is in the state’s 6th Congressional District, which flipped from red to blue in 2018. Klobuchar said she’s won in swing districts and rural areas, and would have the ability to build coalitions and get Republican votes. “I’m someone who has brought people with me.”

“She is bright. She has an emotional IQ. She has empathy, for God's sake. She has experience,” Haas said.

Haas is undecided but leans toward Klobuchar. For her, any one of the Democrats would be better than Trump but she sees flaws too. She was a fan of Vice President Joe Biden “until he faded.” She likes Buttigieg but worries the country wouldn’t elect someone so young. She feels Sanders is too far to the left of most voters, and questions Bloomberg’s campaign and whether it would make sense for the nation to simply trade one billionaire for another.

“After the [Democratic presidential debate] I would like to see him think better on his feet, have answers that are more solid, be more prepared for that kind of challenge,” she said of Bloomberg.

Small business owner Mohamed Mouaddine said he hasn’t made a decision yet but he thinks Warren comes across as Presidential. He said he has major concerns about Bloomberg’s relationship with women and the non-disclosure agreements some of his employees signed. Several other people at the rally also expressed reservations about Bloomberg’s past comments about women and his support for the New York Police Department’s discredited stop-and-frisk policies.

Mouaddine, an immigrant from Morocco who has lived in Colorado for nearly two decades, said he’d like everyone to settle on a nominee sooner rather than later.

“I was interested in hearing what [Klobuchar] has to say about how we're going to avoid what happened in 2016 when we had the Democratic Party that is completely split between Bernie Sanders and Hillary Clinton. And this year we still have, what, seven, eight in the race and we don't know yet who's going to be the front runner?”

While Klobuchar didn’t address that directly, she did reference Wednesday’s Las Vegas debate, where she and Buttigieg had some of the harshest exchanges of the night.

“There's a lot of great friends of mine up there on the debate stage,” she said. “You couldn't tell we were friends. But yeah, there are a lot of great people up there.”

The Denver area has seen a slew of Democratic candidates recently, hoping to capture votes ahead of Super Tuesday. Biden held a fundraiser earlier this week, and Sanders drew more than 11,000 to his rally last Sunday. Hawaii Rep. Tulsi Gabbard was also in the state Wednesday. And in addition to Buttigieg, this weekend will also see a Warren rally on Sunday.