President Donald Trump riffed for more than an hour to a near-capacity crowd in Colorado Springs on Thursday night.

Between sweeping tributes to American greatness, sinister warnings and teases about the Space Command — along with complaints about fake news and the Oscars — the president showered praise on Sen. Cory Gardner, the Yuma Republican.

“We are going to win Colorado in a landslide. And you’re going to help us get Cory Gardner across that line, because he’s been with us 100 percent,” Trump said. “There was no waver. We appreciate it. Thank you, Cory. Thank you.”

It was just the first of several times in the speech that the president praised Gardner and urged the crowd to support his reelection. Later, he described the freshman senator as “rock solid.”

In remarks about two hours before Trump spoke, Gardner took aim at what he called the “slate of far-left candidates” running against him in his reelection campaign.

Gardner tied himself to Trump, saying they’d introduced waves of conservative judges together and “delivered an economic boom like no other this country has ever seen.”

When the president took the stage, he opened his speech in this military-heavy city by honoring two veterans of the battle of Iwo Jima, along with those of more recent wars. In the rest of his 100 minute address, Trump wove in complaints about his treatment in the media, and an extended review of the Democratic debate and the performance of “Mini Mike,” his derogatory nickname for Michael Bloomberg. He also harped for a couple minutes on the success of the South Korean film Parasite at the Oscars.

Trump then spent several minutes reading out a long list of polling numbers from 2016, to mixed applause, apparently wanting to counter a commentator he’d heard on Fox News criticizing his own debate performance in the last election. His segue into criticism of “fake news,” drew the crowd to its feet with chants of “U-S-A.”

Also popular was Trump’s story of shaking more than 1,100 cadets’ hands after delivering the commencement address at the Air Force Academy – and his promise that Colorado Springs might land the permanent headquarters of Space Command, which is temporarily located at Peterson Airforce Base.

“I love the Air Force Academy. And you have all of the infrastructure, so you’re being very strongly considered,” he said, promising a decision by the end of the year.

Then, the president noted that Democratic Gov. Jared Polis had met him at Air Force One. At first, the crowd booed. But Trump noted that Polis had lobbied for the Space Force headquarters, which drew a very light smattering of applause. 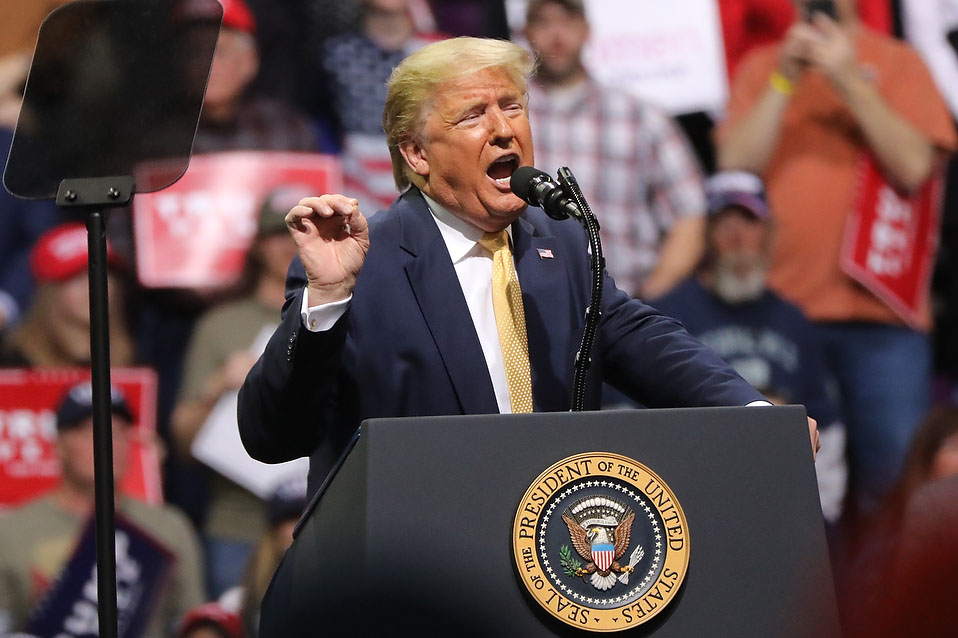 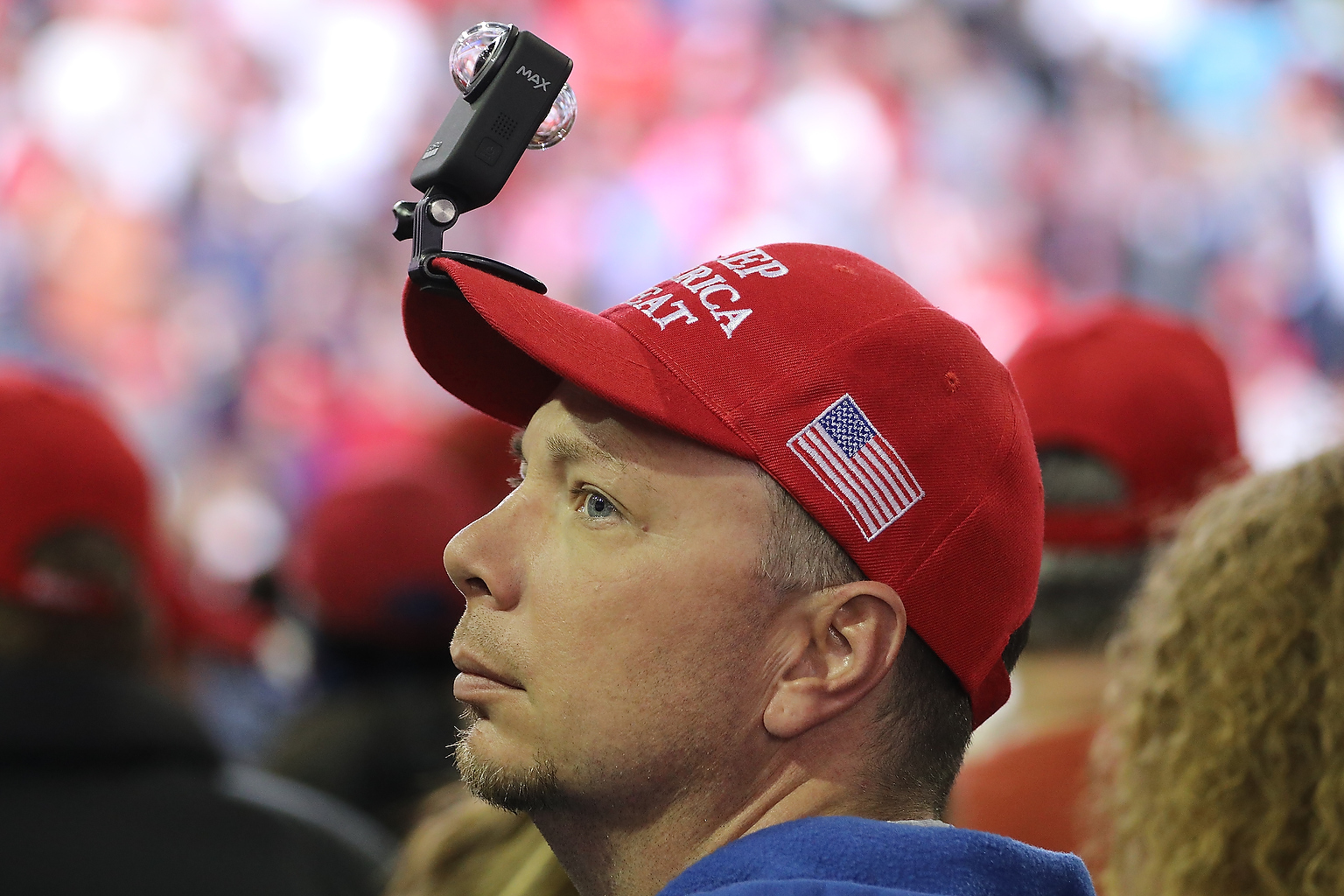 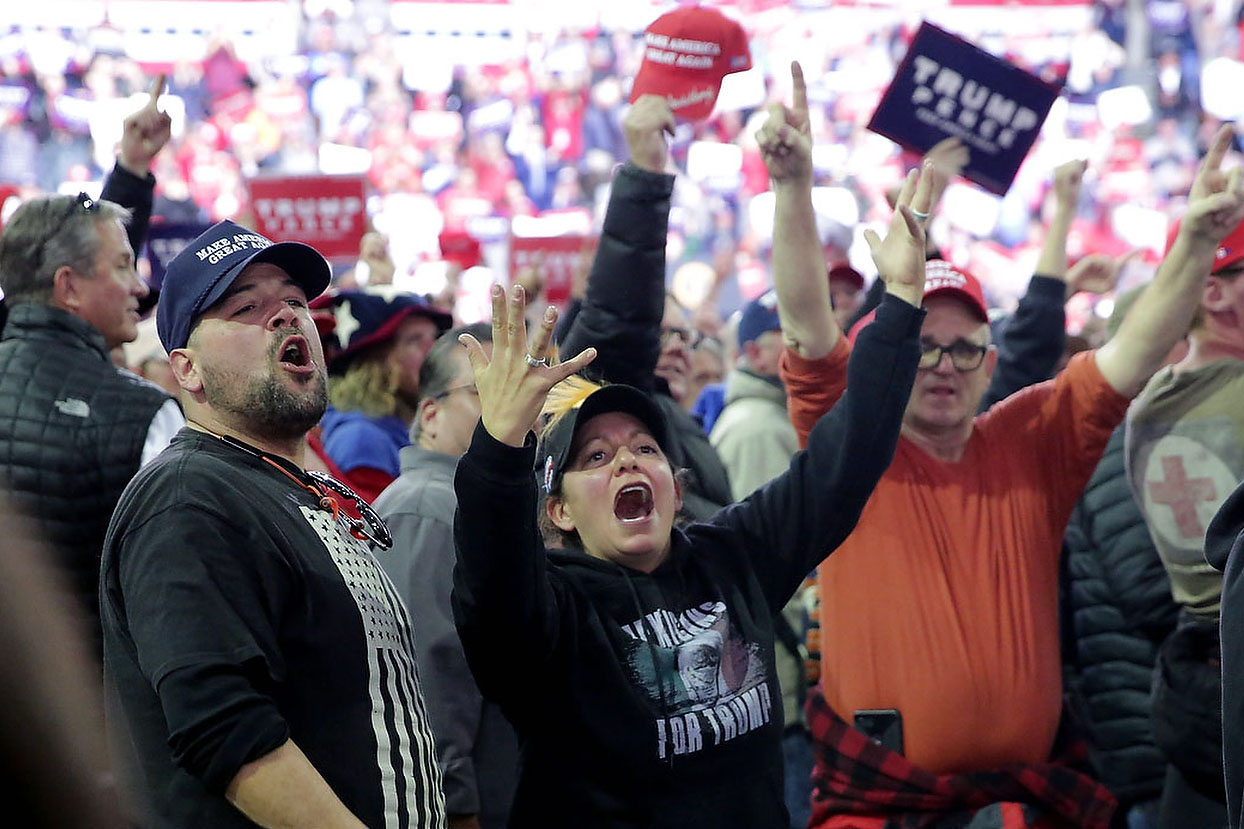 Hart Van Denburg/CPR NewsUrged on by President Trump, supporters turn around and yell at the news media covering his campaign rally Thursday Feb. 20, 2020 at World Arena in Colorado Springs. 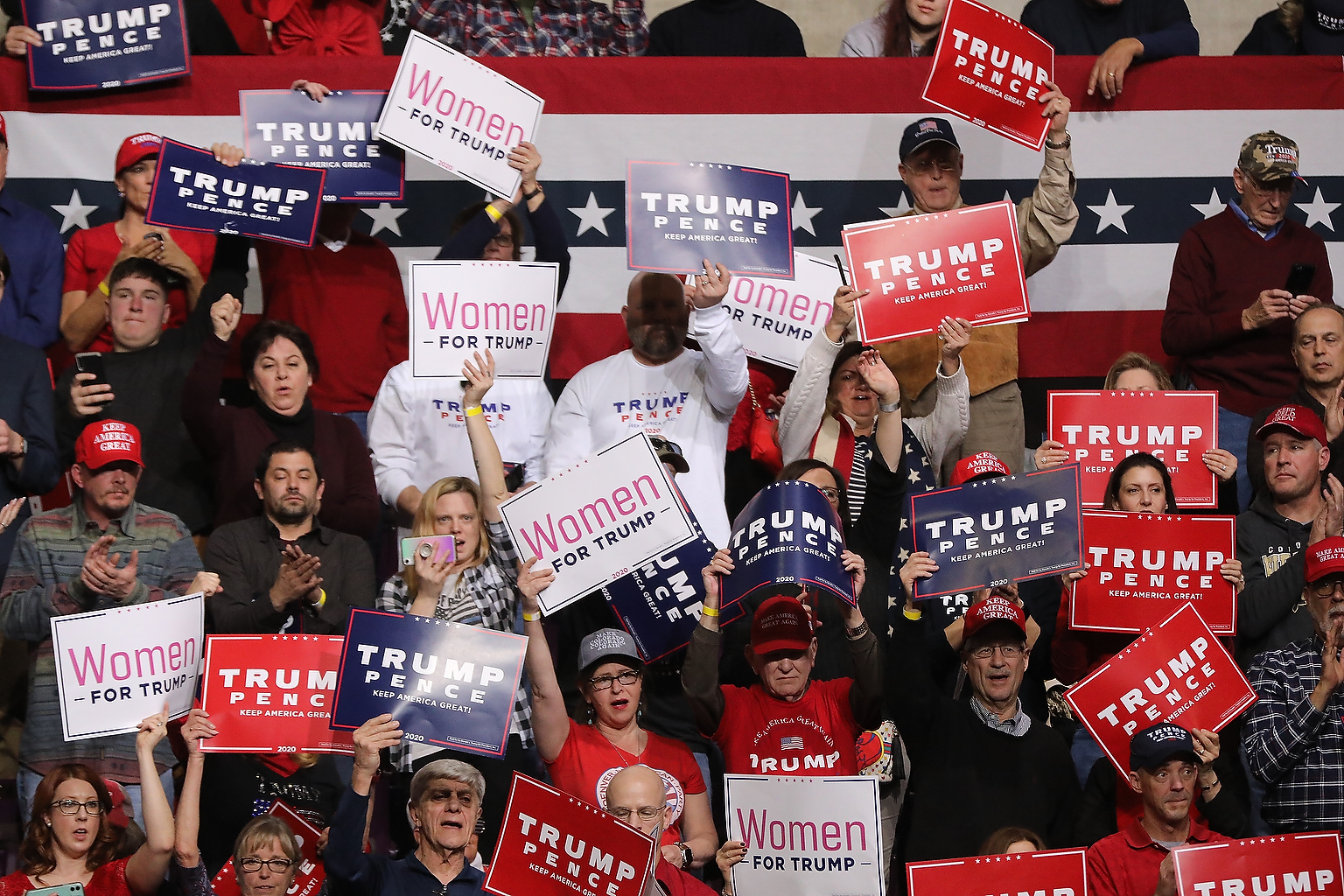 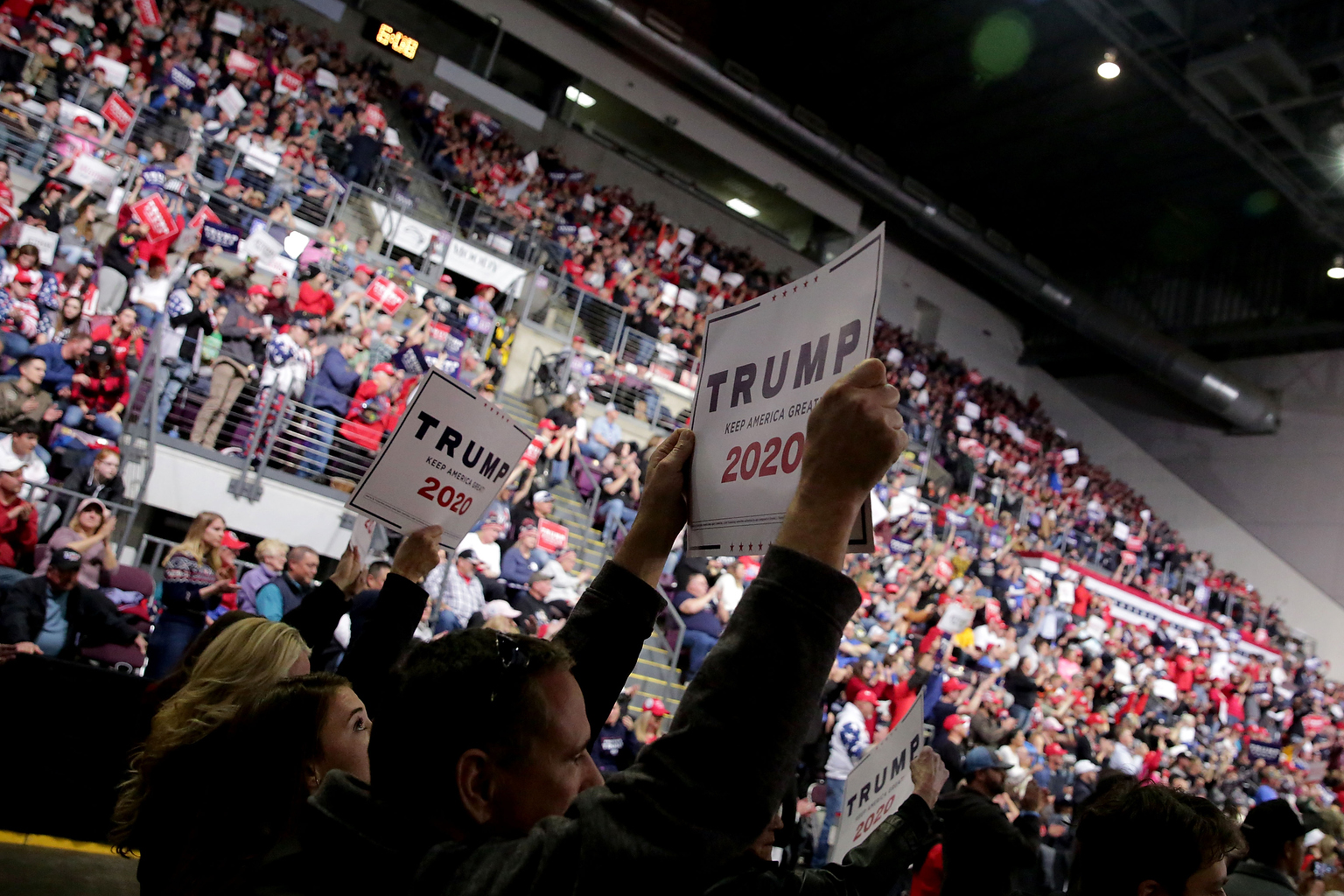 “You taking good care of Colorado, please?” Trump asked Bernhardt as he took the stage. “He’s a big deal in Colorado, right? He’s a big deal: all those beautiful mountains and rivers and lakes. He’s the guy. You better keep them nice and clean.”

Those introductions were followed by a reappearance from Gardner, which drew whistles, applause, and a chant of “Co-ry” from the crowd.

“We are going to win because we believe in America,” Gardner said. He warned against the “normalization of socialism by Bernie Sanders.”

He praised Trump for bringing the Bureau of Land Management headquarters to Grand Junction and for funding a long delayed water pipeline from the Arkansas River. “Mr. President, you’ve done so much good for Colorado,” Gardner said.

Trump’s speech also touched on immigration, and he took direct aim at Colorado as he warned of cities that are creating “deadly” sanctuary laws for immigrants.

“Last year, Colorado Democrats enacted a law declaring this entire state to be a sanctuary,” he said, referring to a law that forbids Colorado police from obeying immigration enforcement requests to detain people past their scheduled release date from jail.

“Democrats think Colorado should be a haven for the murders predators, kidnappers, and felons,” he said.

The speech also touched on health care, with Trump reiterating his State of the Union comments calling for paid family leave, along with promises of health care price transparency and veterans’ health reforms.

Trump returned to a Colorado theme at the speech’s conclusion, praising pioneers and name checking cities across the state. He landed once again on a promise of “winning, winning, winning,” and walked off to the orchestral strains of The Rolling Stones’ “You Can’t Always Get What You Want.”

Colorado Democrats were quick to push back against the president’s speech and seized on his praise of Gardner.

Within minutes of Trump thanking Gardner for his support, the liberal political group ProgressNow Colorado tweeted the clip out, paired with a statement Gardner made in 2016 that called for Trump to drop out of the presidential race.

Shortly after the speech, former Democratic Gov. John Hickenlooper, who hopes to challenge Gardner for his senate seat, sent out a fundraising appeal that drew on the same quote, with the subject line “TRUMP: Cory Gardner has been with us 100%.”

Given that Colorado went to Hillary Clinton in the last presidential election, and voted overwhelmingly for Democratic candidates in 2018, Gardner is considered one of the most vulnerable Republican senators up for reelection in 2020r.

He needs strong support from state GOP voters to have any hope of holding his seat. But Democratic groups hope his alliance with the president will drive away moderates, and they plan to emphasize their ties at every opportunity.

“What we heard tonight was exactly what we expected — lies and misleading statements from both Donald Trump and Cory Gardner intended to save their floundering political careers,” said Colorado Democratic Party Chair Morgan Carroll in a statement. “Gardner has been a loud cheerleader for Trump as he’s degraded the Constitution and undermined Coloradans’ health care, and Colorado will show Trump and Gardner the door this November.”