To deal with the COVID-19 pandemic, Gov. Jared Polis has issued orders that would have seemed inconceivable just a few weeks ago. He’s closed Colorado's schools, bars and the ski industry — and banned large public gatherings.

It’s an exercise of executive authority that has no precedent in recent history, and it’s put his leadership style in the spotlight.

To get a direct sense of how Polis operates at this critical time in the state, CPR reporters were able to spend several hours behind the scenes in his office to observe the governor as he juggled a never-ending string of meetings and calls.

Walking into his state Capitol office, one of the first things you notice is all of the phones. Three cell phones spread out in front of him, and then a dedicated conference phone presiding over it all.

“This is Jared Polis joining,” Polis gave the greeting familiar to conference calls of all stripes as he dialed in along with nearly all of the nation’s governors for an update from President Donald Trump and Vice President Mike Pence.

Dressed in a dark turtleneck and jacket, and his trademark running shoes, Polis occasionally checked text messages and sipped iced tea. Three of his senior staff joined him at a large circular table. A small dispenser of hand sanitizer sat nearby.

“Mostly on these, they talk for a while and there’s a chance for us to ask questions in the end,” he noted.

While waiting for the White House call to really get going, Polis made tweaks to his next round of executive orders that would come later in the day. Talking with a department head on one of his cell phones, he worked to finalize the ban on elective surgeries and the order to close nail and hair salons, spas and tattoo and massage parlors.

The Democratic governor said he doesn’t find the large White House calls especially useful because he thinks they are mostly staged for the media. He prefers to get on the phone directly with the vice president or the head of the Centers for Disease Control and Prevention to get answers, something he said he does almost daily.

His focus with the federal government right now is to address the immediate need for more protective equipment for health care workers and more coronavirus tests. Polis doesn’t want Colorado to be ignored in the scramble for resources, in favor of places like New York or Washington state.

At a couple of points in the long call, Polis tried to ask President Donald Trump a question, struggling at first to even get into the queue. Several Republican governors were able to ask questions, but he never got his chance.

Instead, after nearly an hour, he signed off and walked down the hall with chief of staff Lisa Kaufmann to her office for yet another briefing — a midday update with top state officials.

This is a pretty typical day for Polis now, filled with back-to-back meetings related to coronavirus, along with regular field trips to see the state of things first hand.

“I started at the emergency operation center for a couple of hours this morning. I'm onsite in different areas, and of course here in the governor's office,” he said. The governor has tried to practice what he preaches to the public about social distancing. “A lot of the work is being done over telephones, over video conferencing.” 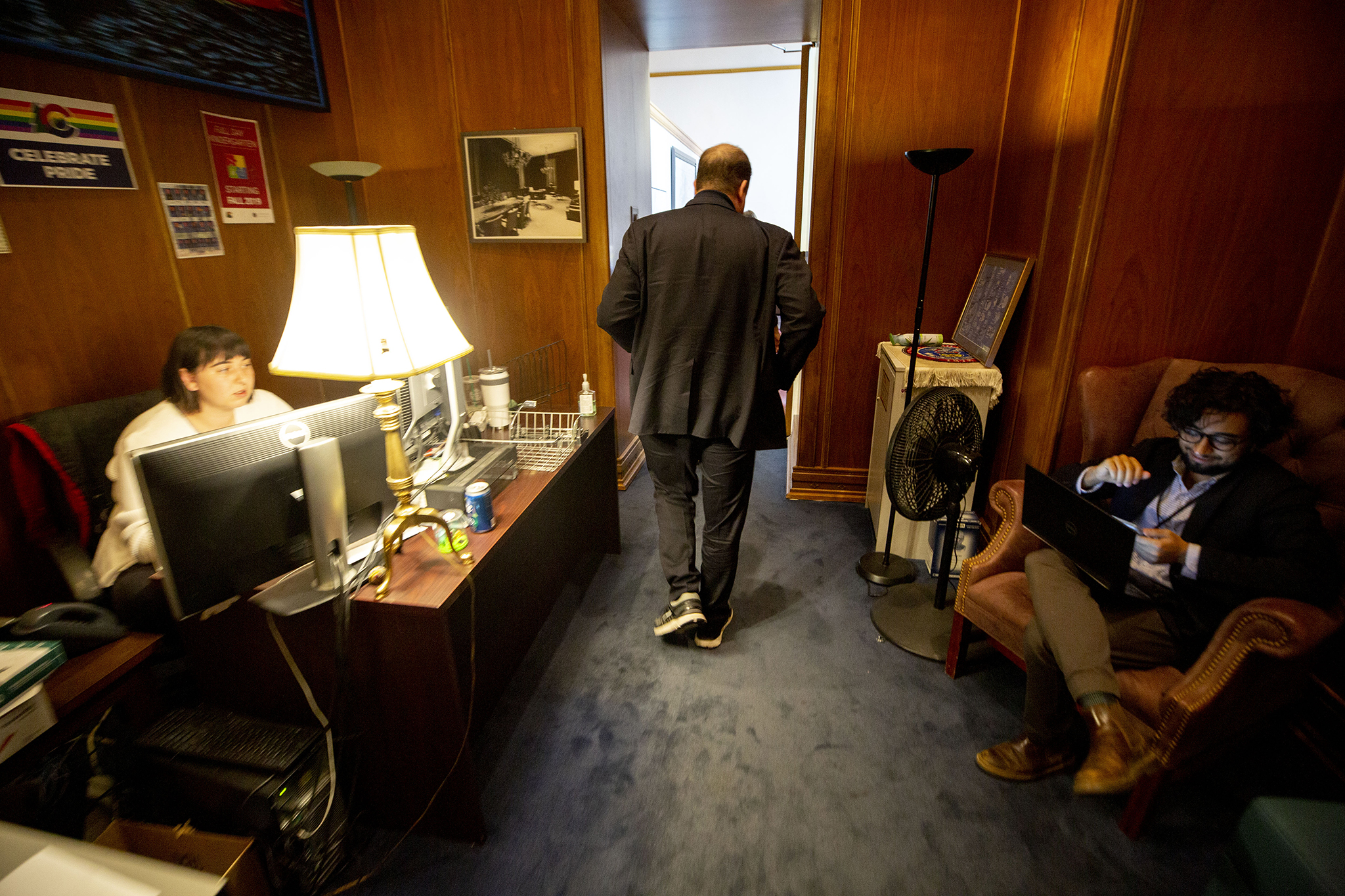 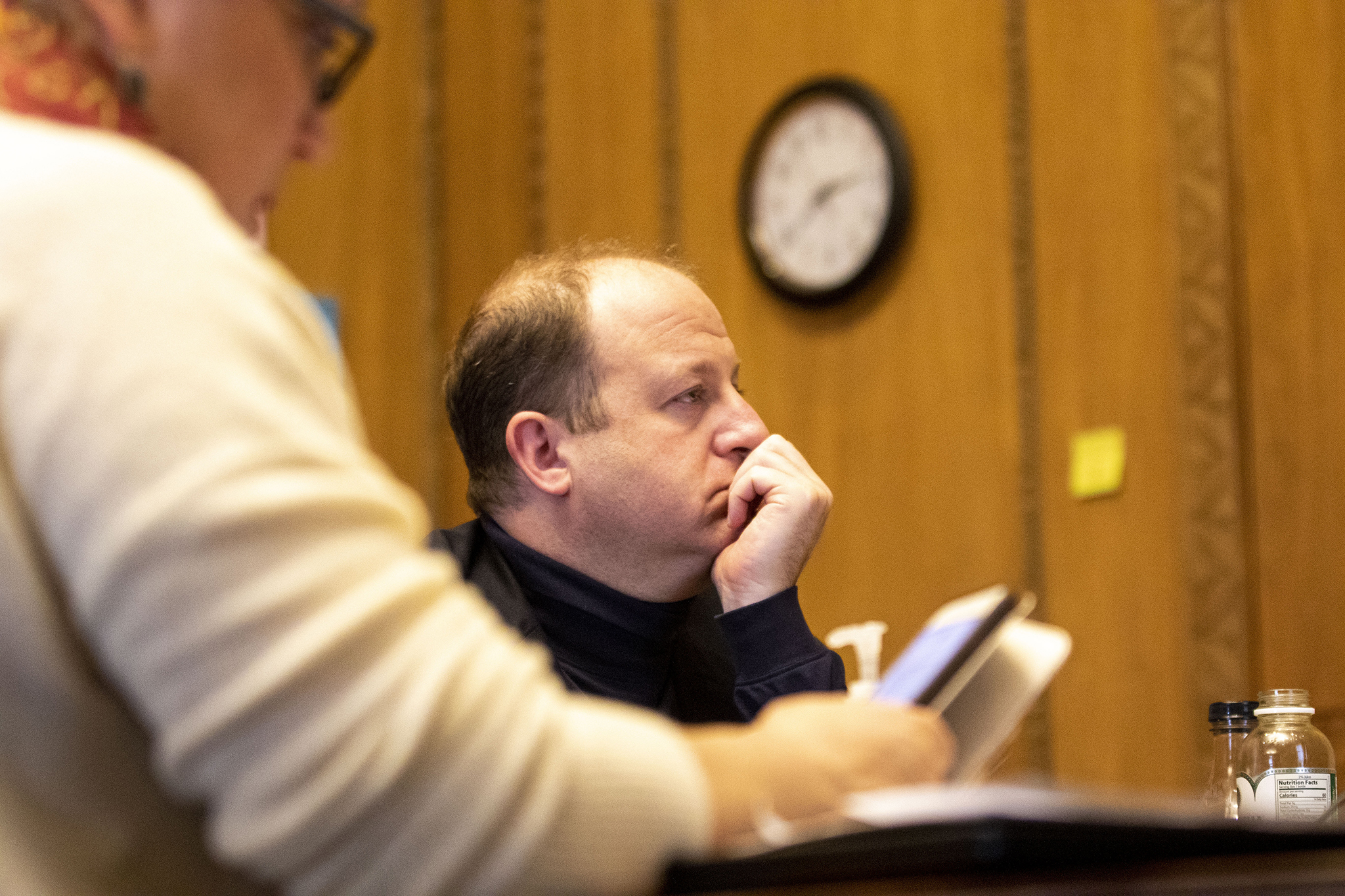 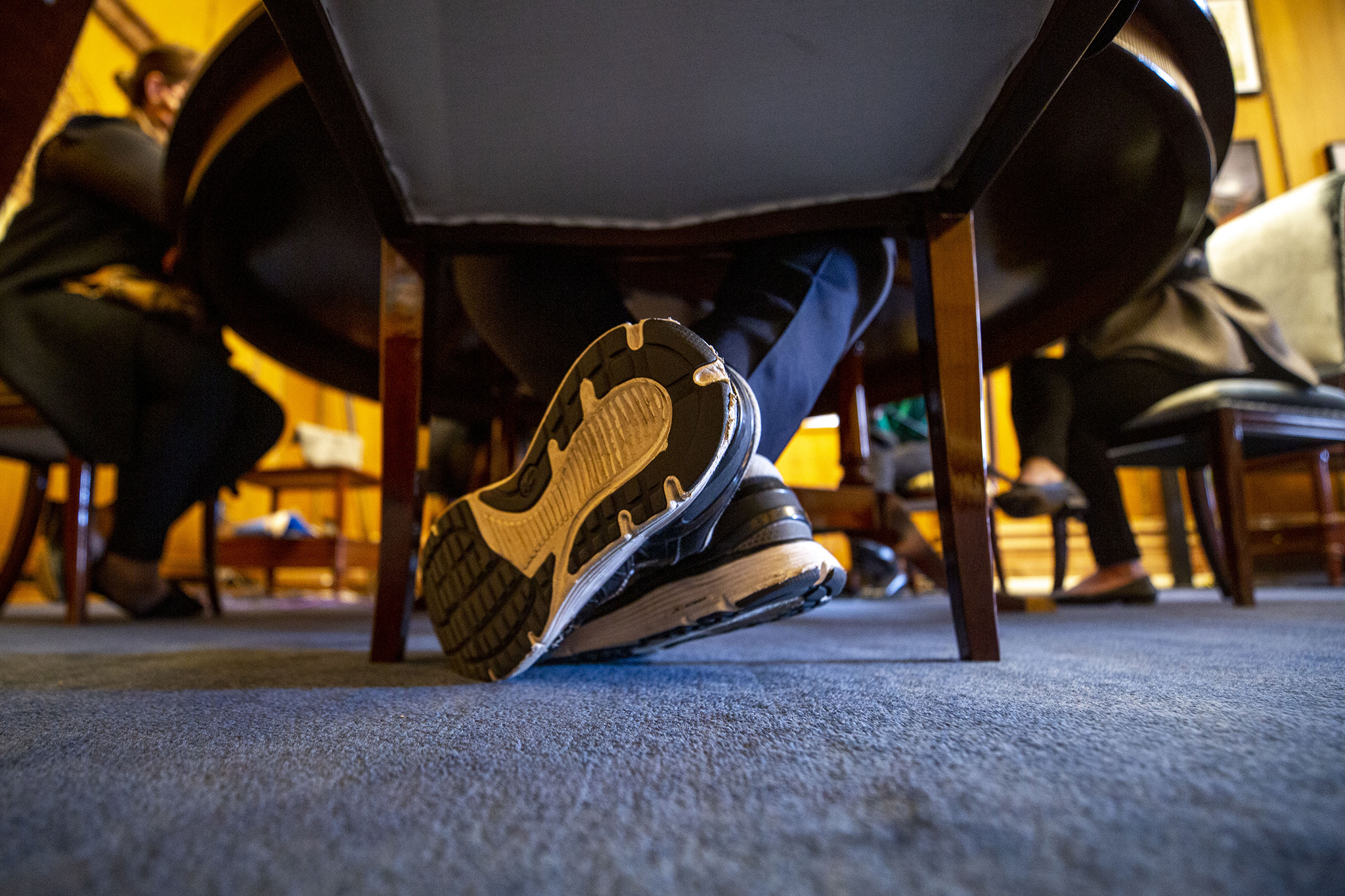 Kevin J. Beaty/DenveriteGov. Jared Polis speaks to hundreds of clergy on a conference call about the COVID-19 crisis, March 19, 2020. 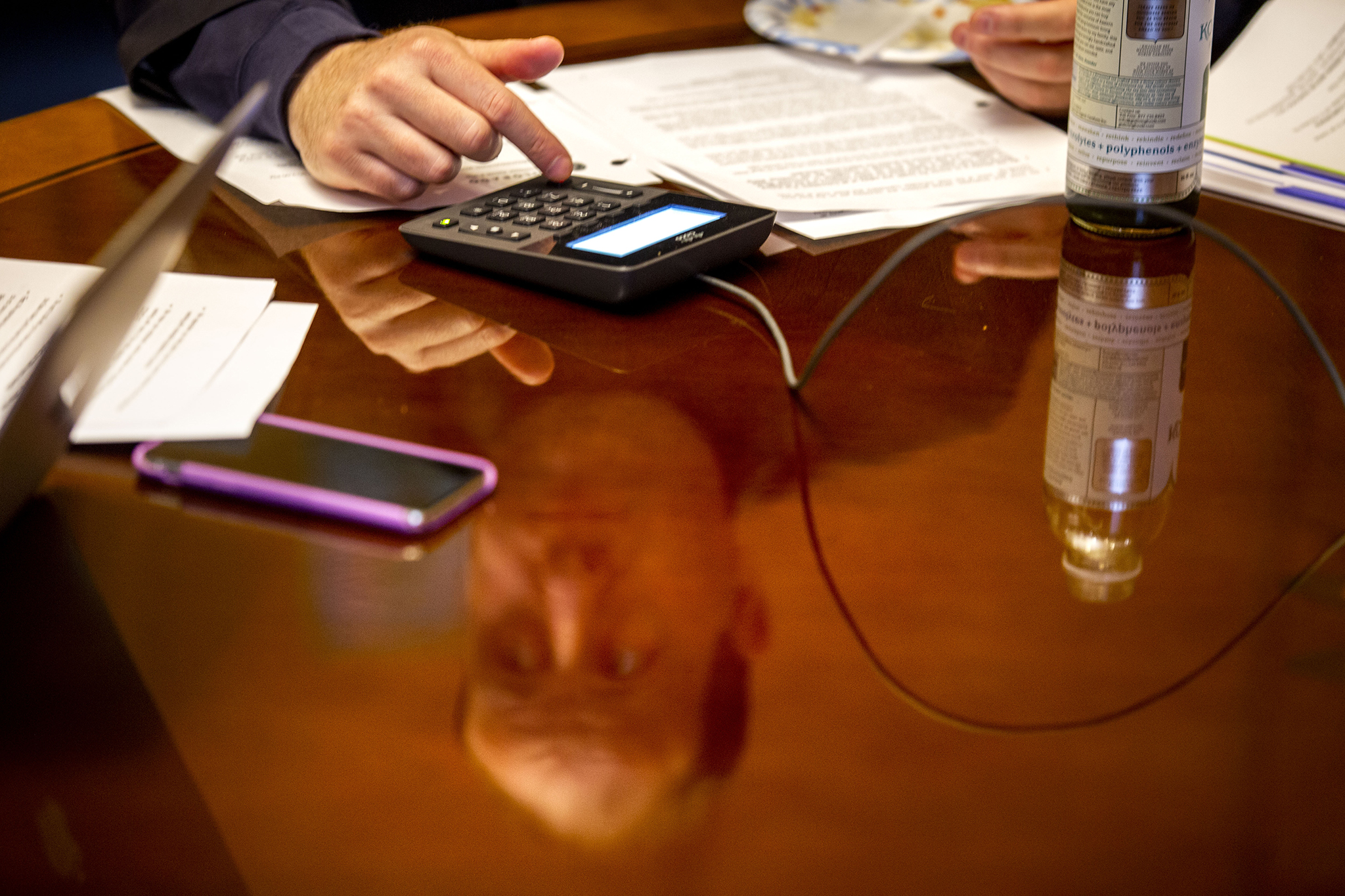 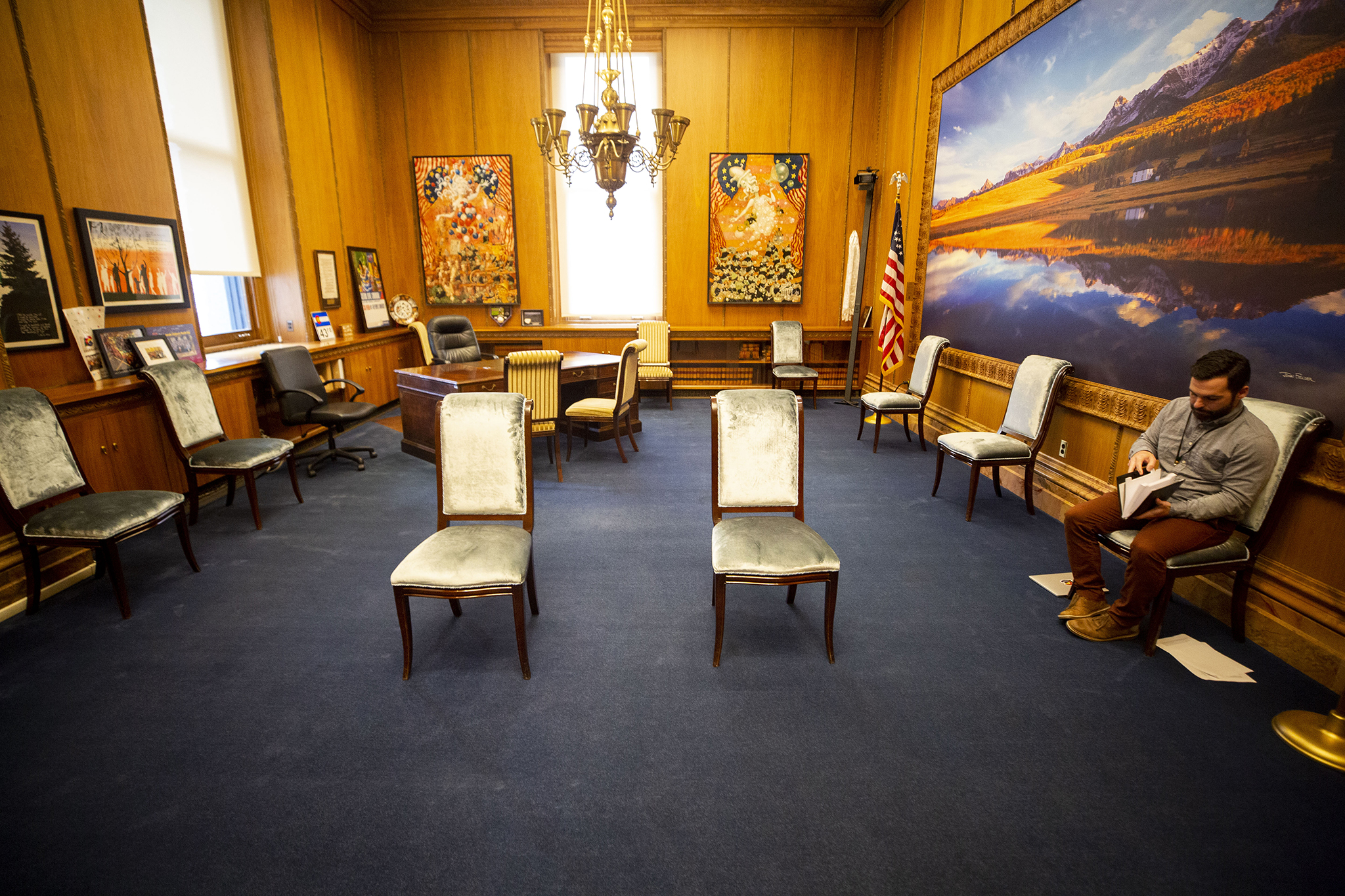 In this meeting, Polis and his staff, who also mostly worked remotely, methodically ran through actions he planned to take, exchanged updates on testing capacity, hospital preparedness and discussed possible emergency medical equipment and how to deal with surging interest in an untested possible coronavirus treatment.

Polis updated officials on the White House call, where at one point, the president talked about using the antimalarial drug chloroquine as therapy for the virus. It has not yet been approved by the Food and Drug Administration for that use, but the president’s optimism has provoked a spike in public interest.

“I've heard from like six doctors today that as a result of that all their patients are demanding prescriptions,” Polis said. “So we should probably figure out how to direct that towards those most in need with the limited supply that we would have.”

Trying to strike a balance

On the day that CPR reporters visited the governor’s office, an El Paso County man in his 60s became the third person in Colorado to die from COVID-19, more than three dozen people had been hospitalized and the total number of cases neared 300 in about a third of the state’s counties. Late in the afternoon, the state health department called for people, especially those who suspected they might have the illness, to self-isolate and those in close contact with sick people to self-quarantine.

State governors have been on the frontlines of the coronavirus pandemic across the country and they’ve taken vastly different approaches to the threat, partly because of each state’s unique circumstances.

Polis was the first in the country to set up a mobile testing site, but he’s so far resisted issuing a statewide “stay at home” order, as governors in more than a dozen states have done. By Monday, Denver Mayor Michael Hancock had issued his own order to shut down non-essential businesses and require people to stay home as much as possible.

Polis explained his reasoning for resisting a shelter-in-place approach, on a large conference call with around 80 state lawmakers.

“We don't live in a central-command structure, authoritarian country like China where people can be locked down. That's why this whole in-place thing is not viable here,” he said and warned that people wouldn’t comply with such a broad order. “We have to, again, focus on where they're congregating, where the virus is spreading, reduce those vectors. We're using data and science every step of the way.”

But that doesn’t mean a statewide “stay at home” order is off the table. Stan Hilkey, the executive director of the Colorado Department of Public Safety was also on the call with lawmakers and acknowledged preparations are underway if it comes to that.

“We're talking about a lot and yes, we're looking at how we can do it, and make sure that we understand all the implications of it,” Hilkey said.

If such an order were implemented, a big key for success would be contingent on the timing.

“Because it's really important that we don't do it too soon or too late because we know that we can't do it forever.”

The bearer of bad news

The time CPR spent with Polis opened a window on just how all-consuming the pandemic is for the governor and a lot of Colorado residents — his constituents. The unprecedented mix of medical, economic and social problems impacts virtually every facet of everyday life, and the governor is at the center of it all.

“So here's the million-dollar question,” asked one of the 500 Colorado faith leaders on yet another massive conference call with Polis. “Do you have any insights for us on how long we should be planning and preparing for not being able to gather in person?”

“This is likely to be weeks and months and indeed likely months,” the governor warned. “Until there is a vaccine or an adequate cure that reduces the morbidity rates.”

Polis’ moment in the spotlight is arguably unlike anything a Colorado governor has faced in decades, trying to manage a public health crisis on a scope which hasn’t been seen in a century, not since the Spanish flu pandemic. The outbreak has spawned a twin disaster-in-the-making: An economic meltdown that could reverberate through the rest of his time in office.

So far, Polis’ handling of the coronavirus outbreak has generally gotten a positive response from both Republican and Democratic leaders in the state. But some conservatives said they are keeping a watchful eye on the situation, and are prepared to push back if Polis moves ahead with a statewide “stay at home” type of action.

“Government could do just as much, if not more, damage to our economy than this virus could ever do,” said Sage Naumann, a spokesman for Colorado Senate Republicans. “We appreciate the governor keeping lines of communication open and encourage him to continue keeping them open in the coming days, weeks and months ahead.”

Governors are often called on to be “Consolers In Chief” during a crisis. But Polis plays a different role right now. He's become sort of the “constant bearer of bad news,” taking on the responsibility of telling people hard truths and urging them to take difficult steps, from telling people not to be “stupid” about large gatherings, to warning that the Grim Reaper is the ultimate enforcer of social distancing.

However, Polis acknowledged the situation had taken a huge toll on Colorado and said it hasn’t been easy to close industries and put tens of thousands of people out of work.

“The decisions are very painful,” he said. “It’s painful for any Colorado governor to consider the magnitude of something like closing down the downhill ski industry and the ski lifts, which is so iconic for our state.”

But in the end, Polis said, as governor, he has to be able to act.