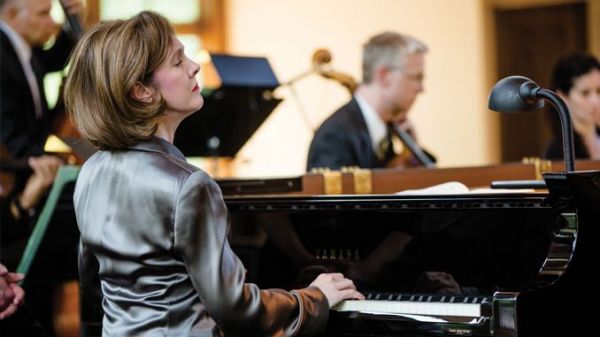 2020 marks 10 years as artistic director of Bravo! Vail Music Festival for concert pianist Anne-Marie McDermott. During her tenure, she’s grown the stunning list of renown musicians and orchestras, deepened and diversified top-level musical offerings and shared her own breathtaking piano artistry. COVID-19 forced Bravo! Vail to pivot this year to a series of small performances and online events for which she'll perform.

To celebrate McDermott’s 10th anniversary, we asked her to share her top ten favorite memories for CPR Summerfest:

Anne-Marie McDermott's decision to present Gustav Mahler's massive “Tragic” Symphony No. 6 made a bold statement for her first year at Bravo! Vail. The 80 minute tumultuous work was hardly easy-listening for a summertime audience. “We thought about creating pins for the audience: ‘I survived Mahler's 6th!’” McDermott quipped. But she said the gamble paid off with Jaap Van Zweden conducting the Dallas Symphony Orchestra, leaving many audience members in tears by the end at Bravo! Vail’s Ford Amphitheater home.

Piano master, Yefim Bronfman made his Bravo! debut in 2012 with the New York Philharmonic with the Brahms’ Piano Concerto No. 2. “Within 60 seconds I felt and visually saw everyone experiencing something out of this world,” McDermott said. Two years later, Bronfman returned to Vail but didn’t realize he would also be asked to step in for violinist Midori in the eleventh hour. He joined his hometown New York Philharmonic again, this time for the Brahms Piano Concerto No. 3. The audience’s enthusiasm prompted an encore of the final movement of Beethoven’s Piano Concerto No. 2. McDermott exclaimed, “I had no idea it was coming. It was very special.”

To celebrate the 200th anniversary of Giuseppe Verdi's birth, the Philadelphia Orchestra took on the Italian composer’s massive Requiem with their new Music Director, Yannick Nézet-Séguin. “The weather went from beautiful sunny to torrential rain. The thunder and lightning arrived at just the perfect moment in the music,” McDermott remembers. “By the end of the performance, the weather was fine. The universe seemed to be responding to the music.”

McDermott brought her own deep connection to the music of Pulitzer Prize-winning composer, Charles Wuorinen who passed away in March at the age of 81. It was “one of the great artistic experiences I’ve ever had,” she said, describing his music as “dense and eclectic.” The Fourth Piano Sonata, newly commissioned by McDermott and The Town Hall, stretched Bravo! audiences but she noted,“People loved the work. I remember telling Charles about that and how touched he was.” McDermott added, “Each time I come back to the Fourth Sonata I’ve discovered something new in it. And to me that speaks of a masterpiece…I fully believe that it will stand the test of time in a big way.”

Anne-Marie McDermott remembers being a young pianist and desperately pursuing opportunities to be around other high calibre musicians. “Pianists spend so much time alone, practicing,” she said. In response, she started Bravo! Vail’s two-week Piano Fellows Program, shepherding two talented pianists she chooses each year. McDermott is proud of the program, recalling 2015 fellow Nicolas Namoradze, who gave his sold-out debut at Carnegie’s Zankel Hall in 2019.

McDermott made it a priority to bring the unique art of the chamber orchestra to Bravo! Vail in 2016 with one of the best known ensembles in the world: The Academy of Saint Martin in the Fields with violinist and conductor Joshua Bell. “The audience marveled at an orchestra not having a conductor, and that it's an entirely different experience (compared to a full-sized orchestra).” This was “more intimate, more visceral,” she said. The Chamber Orchestra Vienna-Berlin made their North American debut in Vail last year. The run would have continued this summer with the debut of the Chamber Orchestra of Europe, but that will have to wait.

Bravo! Vail had just replaced the hammers (that strike the strings) in their Steinway concert grand piano - a major overhaul that requires the piano to be “broken-in” with many months of constant playing. But there wasn't enough time to do so before piano powerhouse Jeremy Denk was scheduled to play it. Alas, we still have our heroes here in The West. Michael Jackson, Cowboy Technician to the rescue! The seasoned pro worked on the piano for 24 hours straight, resulting in a small miracle, a happy pianist and an elated crowd.

20th century conductor Leopold Stokowski burned a gigantic Bach orchestral sound into the American psyche with the Philadelphia Orchestra in the 1940 Disney film Fantasia, opening with Stokowski’s iconic orchestration of Bach’s Toccata and Fugue in d minor. So Yannick Nézet-Séguin leading “The fabulous Philadelphians” in this work made for chilling time travel, along with other luscious Bach transcriptions and music of Brahms. McDermott recalls, “It was so true to the legacy of The Philadelphia Orchestra. It really highlighted the silky, buttery sound of the string section. To hear Bach played by them was like a religious experience.”

Music can move people in surprising ways, as “Women Rock!” proved, a concert fashioned and conducted by Jeff Tyzik, who led the Dallas Symphony. The celebration of legendary female singers like Aretha Franklin, Janis Joplin, Joan Jett, and Pat Benatar was well-timed with the #MeToo Movement. The high energy of Tyzik and music drove longtime Bravo! fans to their feet. McDermott explained, “People, whom I would never have expected, were literally dancing in the aisles. Kids too. A goose bump evening. Everyone floated away from the amphitheater that night.”

The Bravo! Vail 2019 season got off to a chilly start when a rare June storm coated the valley in almost three inches of snow, putting Bravo! outdoor concerts in peril. While the weather improved the second week, tensions were still high due to the panic of a last-minute soloist change (cellist Knut Weber) for the Beethoven Triple Concerto. Then came a moment of truth. The Beethoven performance had just started when a rather sizable screw dropped directly onto the head of a musician in the first violin section of the Dallas Symphony. McDermott heard it from the piano. The violinist shockingly kept her calm in an incident later discovered to be the mischievous handiwork of a family of raccoons on the roof. The performance went off without a hitch but McDermott concluded, “I can tell you if it had fallen on my head, I wouldn’t have been so calm!"

Listen to broadcasts of past performances from Bravo! Vail Music Festival and other festivals across the state during the Summer of Stars Concert Series, all part of Summerfest.

You can listen to CPR Classical by clicking "Listen Live" on this website. You can also hear CPR Classical at 88.1 FM in Denver, at radio signals around Colorado, or ask your smart speaker to “Play CPR Classical.”