The heavy smoke that hung over Grand Junction for weeks has dissipated. People who had evacuated from their rural homes have returned.

But the Pine Gulch fire, now the largest in state history, isn’t over. It’s entering a new phase.

On a recent morning, fire official Mark Jamieson stood in a blackened desert, with its singed bushes and trees, not far from State Highway 139. He explained that his crews still have hot spots to worry about, but that’s not all they are working on.

“A big part of it is, this rehabilitation of the damage we do when we’re fighting the fire,” he said. “So that’s our mission, really, is to start fixing things, putting them back as good as we can.” 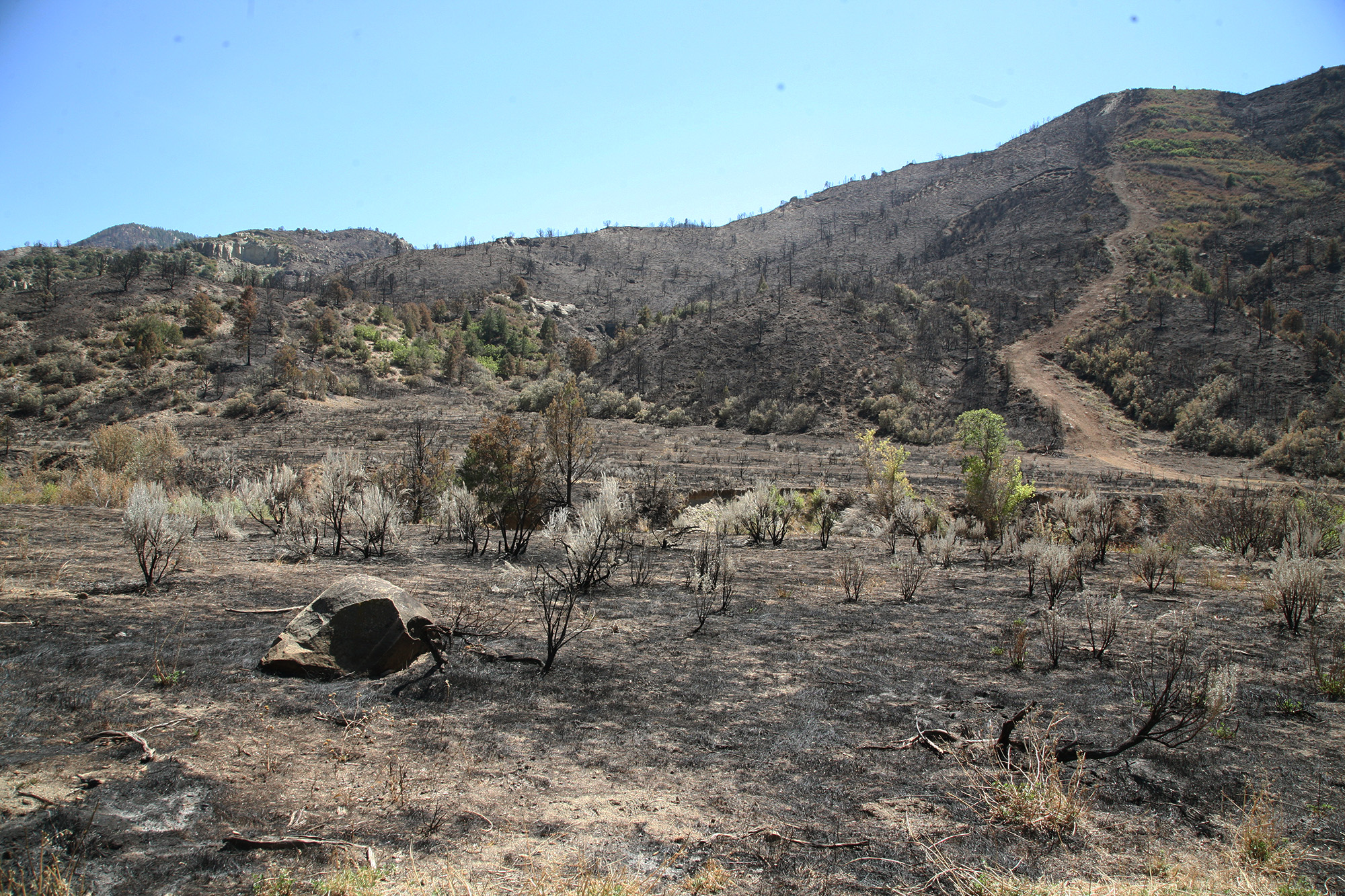 Stina Sieg/CPR NewsWide fire lines cut by a bulldozer, like the one on the right, is one of the many tactics fire crews used to help contain the flames. 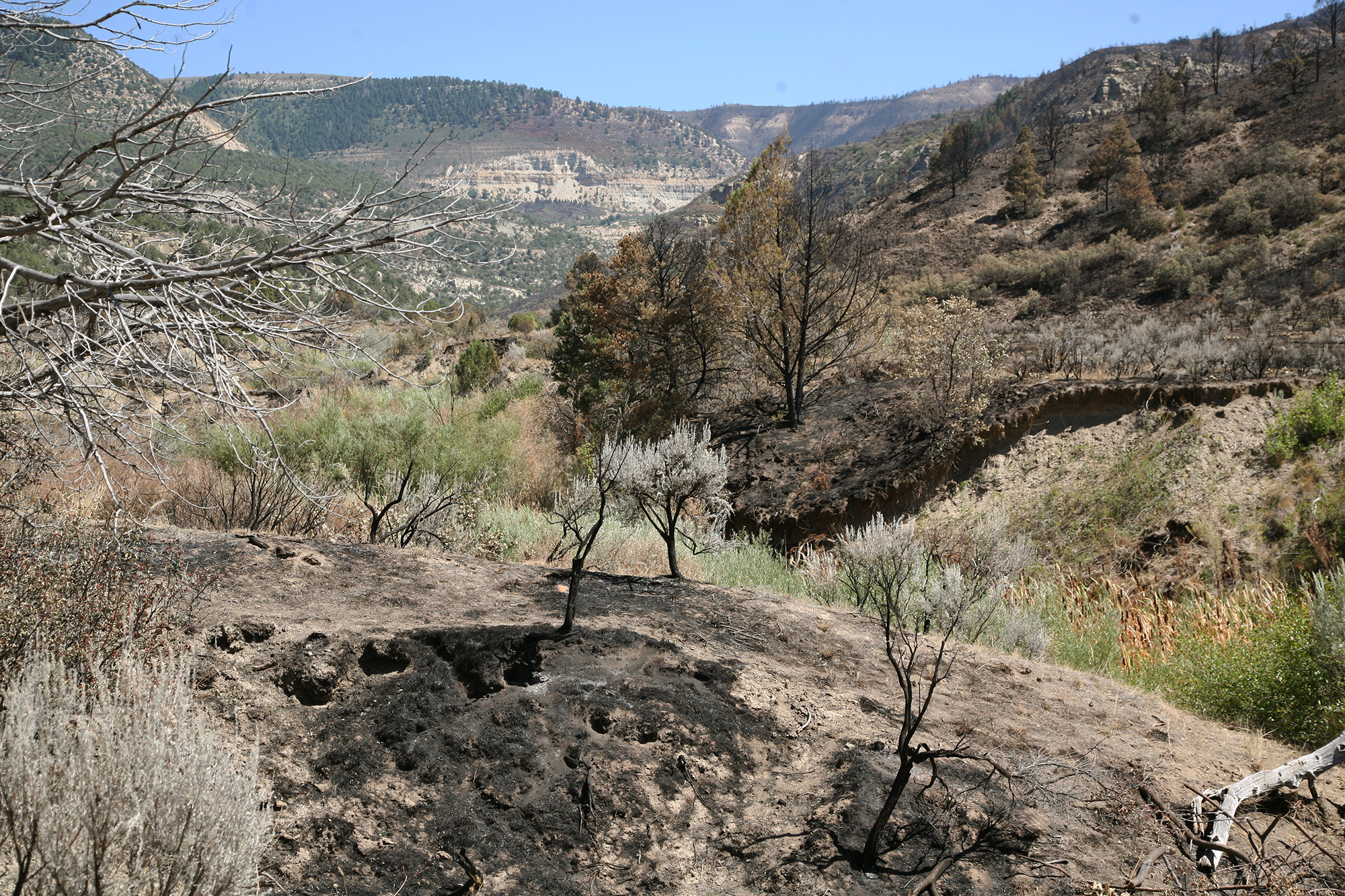 Stina Sieg/CPR NewsThe Barrel Springs Extensive Recreation Area, near Highway 139, was one of the front lines of the Pine Gulch fire. Crews cut deep fire lines and also backburned — burning areas ahead of the fire to keep it from growing. 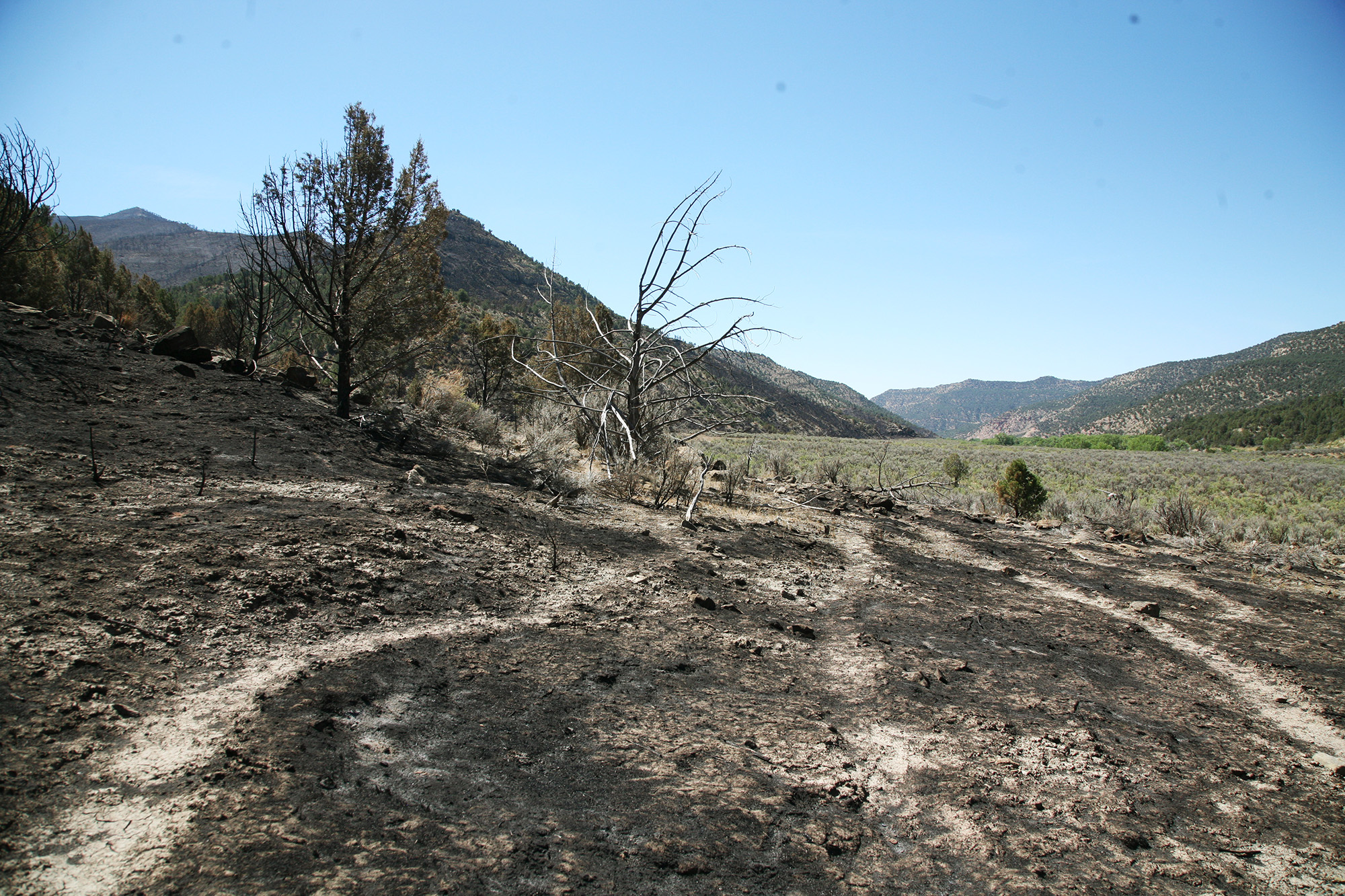 Stina Sieg/CPR NewsThe zone around the Pine Gulch fire is a patchwork of charred and unaffected areas. Firefighting crews were able to save many of the cottonwood stands, seen off in the distance. The trees are key to the local ecosystem and take a long time to regrow.

Jamieson, an operations section chief for the Southern Area Red Team, stood next to one of those projects: a wide, dusty path cut by a bulldozer to help stop the fire. His crews will do their best to erase that dozer line, smooth out the dirt and scatter the bushes that were pushed aside.

The Pine Gulch fire has burned through more than 139,000 acres of rough, isolated country, with rolling hills, high mesas and rugged cliffs. Restoring this area is not just about aesthetics. It will help prevent the erosion and flash flooding that often follow wildfires.

But this unglamorous work will help shape this area for years to come. While there are not many homes near the fire line, ranchers run their cattle through this shrubby backcountry, and it’s popular with hunters.

“The value of hunting up here on Douglas Pass is so important to people,” said Christopher Joyner, a public information officer for the fire who has also hunted here himself. “It’s an area a lot of people seek out.”

He was pleased to see crews have worked hard to save key elements of the ecosystem, like the many cottonwoods that still stand green just on the other side of the fire line.

“And the way they cut this line in here to preserve that is so awesome. It speaks a lot to the firefighters and the value they place on what they’re doing,” he said. “It’s not just stopping the fire. It’s also not destroying important resources like this while they’re doing it.”

While Joyner knows it can be painful to see the fire’s charred path, that’s not the end of the story.

“It does look very devastating now,” he said. “But we’ve got to understand that this is part of the natural ecosystem.” Referring to the cause of the fire, he added, “It was a lightning strike. They’ve been around since before humans.”

Now it’s humans’ job to support that ecosystem as it regrows, on a timeline of its choosing.