When Irina Shatlov watched the Russian invasion play out on her television screen at home in Aurora Wednesday night, all she could do was scream and cry. She frantically called her parents, who live in Kyiv, and urged them to evacuate.

But the main highways out of the city were flooded with cars, her parents told her. They decided to shelter in place and wait out the conflict.

“My parents say we have to stay calm, just pray,” she said. “We cannot do nothing right now for Ukraine, for our families.”

By Thursday, fear had turned into frustration as Shatlov and dozens of other Ukrainian community members gathered on the steps of the state Capitol building in solidarity with their home country. They sang Ukraine’s national anthem together and recounted their text and phone conversations with loved ones now living in a war zone.

Kateryna Popova, a Ukrainian-American living in Denver, passed out blue and yellow flags to strangers. Her family, who lives in Kyiv and several smaller cities in the western part of the country, had begun to evacuate to Poland, she said.

“I want the whole world to be aware of the situation and stand up for human rights,” Popova said. “For the safety of Ukraine and the whole of Europe and the United States.”

Their demands echoed those of Colorado’s congressional delegation, which unanimously condemned the attack as it played out.

“In this day and age this is not how we settle our differences and Russia will pay the price,” Polis told a crowd of supporters at the rally on the Capitol steps.

Demonstrators waved flags and signs stating “Stop Putin” at cars throughout the afternoon. They chanted “Slava Ukraini,” the country’s national salute, which is typically used as a greeting between friends.

Oleg Shvedov, an Aurora resident, carried a Ukrainian flag around his shoulders. He spent most of the day texting with his brothers and parents, who live in several cities in the eastern part of Ukraine.

“There’s nothing to talk about all of the time,” Shvedov said. “When the bombing starts, they just go to the basement and try to avoid the war.”

He was surprised at the turnout, especially from several Russian friends and other non-Ukrainians he met at the rally. He said he planned to send money to relatives still living in Ukraine to try to help.

“Ukraine has no option but to try to win this and Russia should be charged with assault,” he said. “We will definitely be demonstrating more.”

As the crowd grew, Shatlov held a megaphone and grew emotional as she urged the crowd to sign an online petition she and several friends launched. It sought to ask President Biden to impose further sanctions on Russia, cutting the country off from all western financial institutions.

“It's very important for us to stand up and for them to have consequences,” Shatlov said.

After speaking, she checked her phone for updates from relatives.

“The connection with my cousins dropped out,”she said. “I don’t know what’s going on with them. I’m so frustrated.” 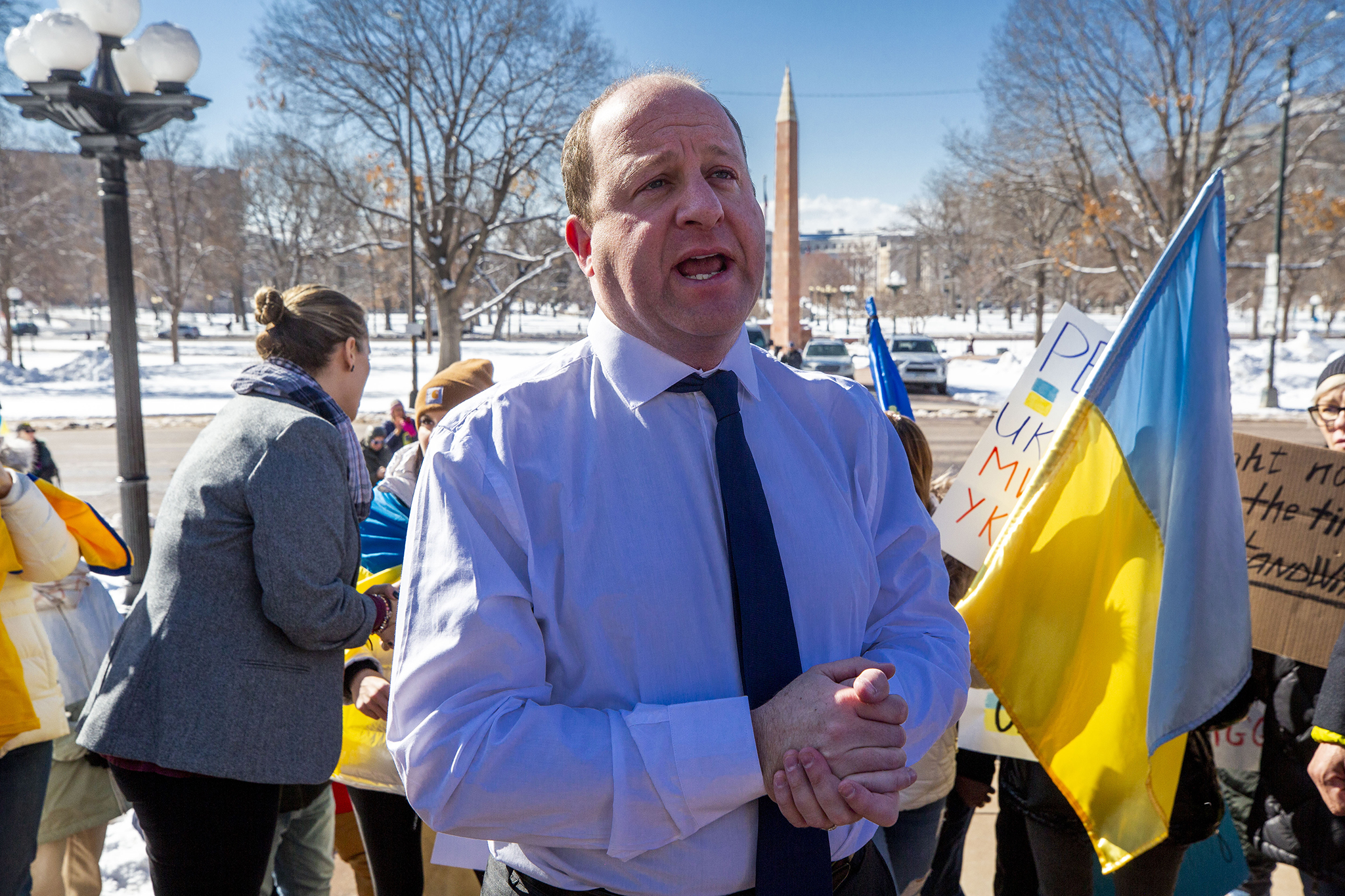 Kevin J. Beaty/DenveriteGov. Jared Polis makes a short visit during a rally for Ukraine on the Colorado Capitol steps. Feb. 24, 2022. 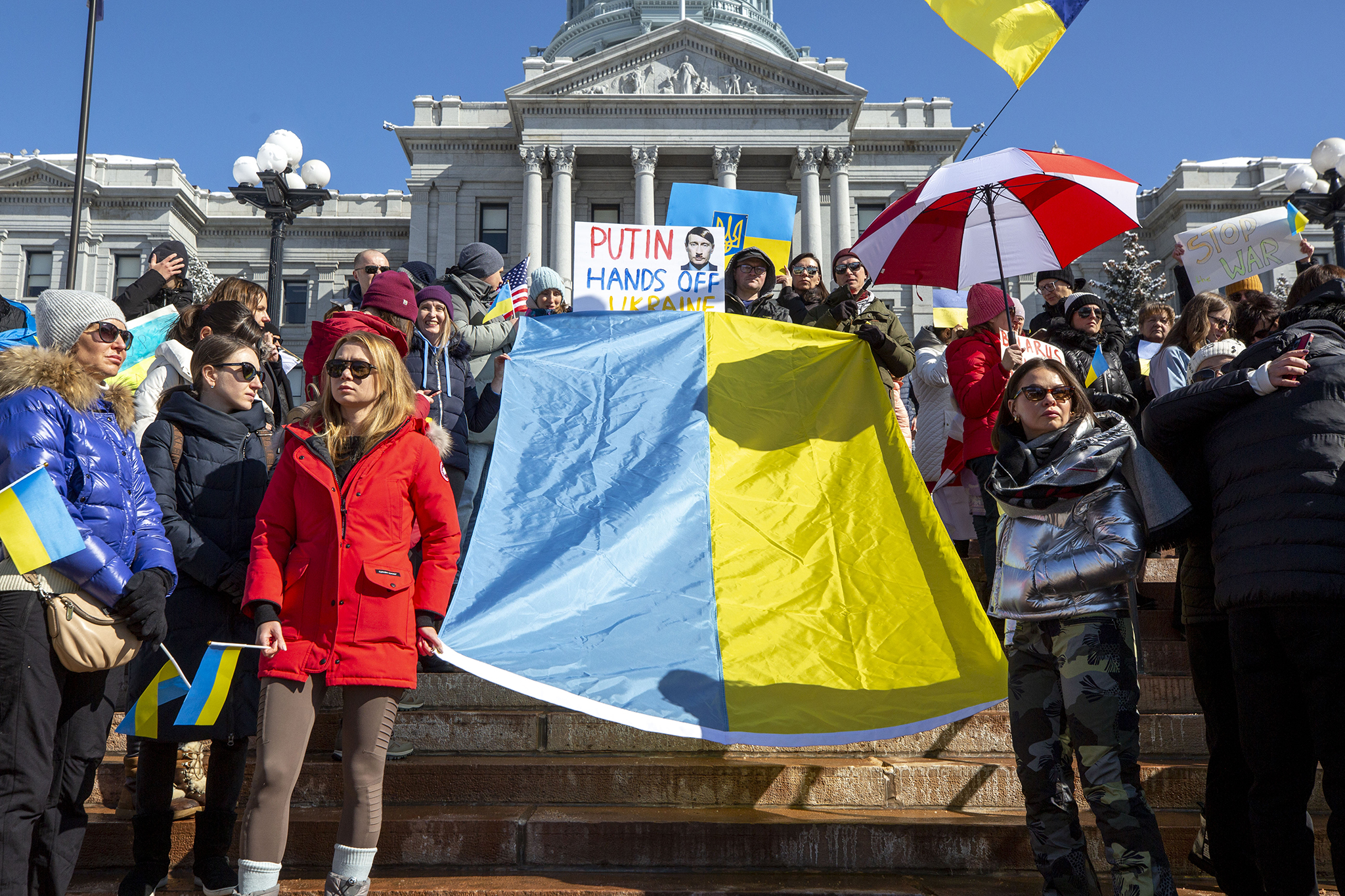 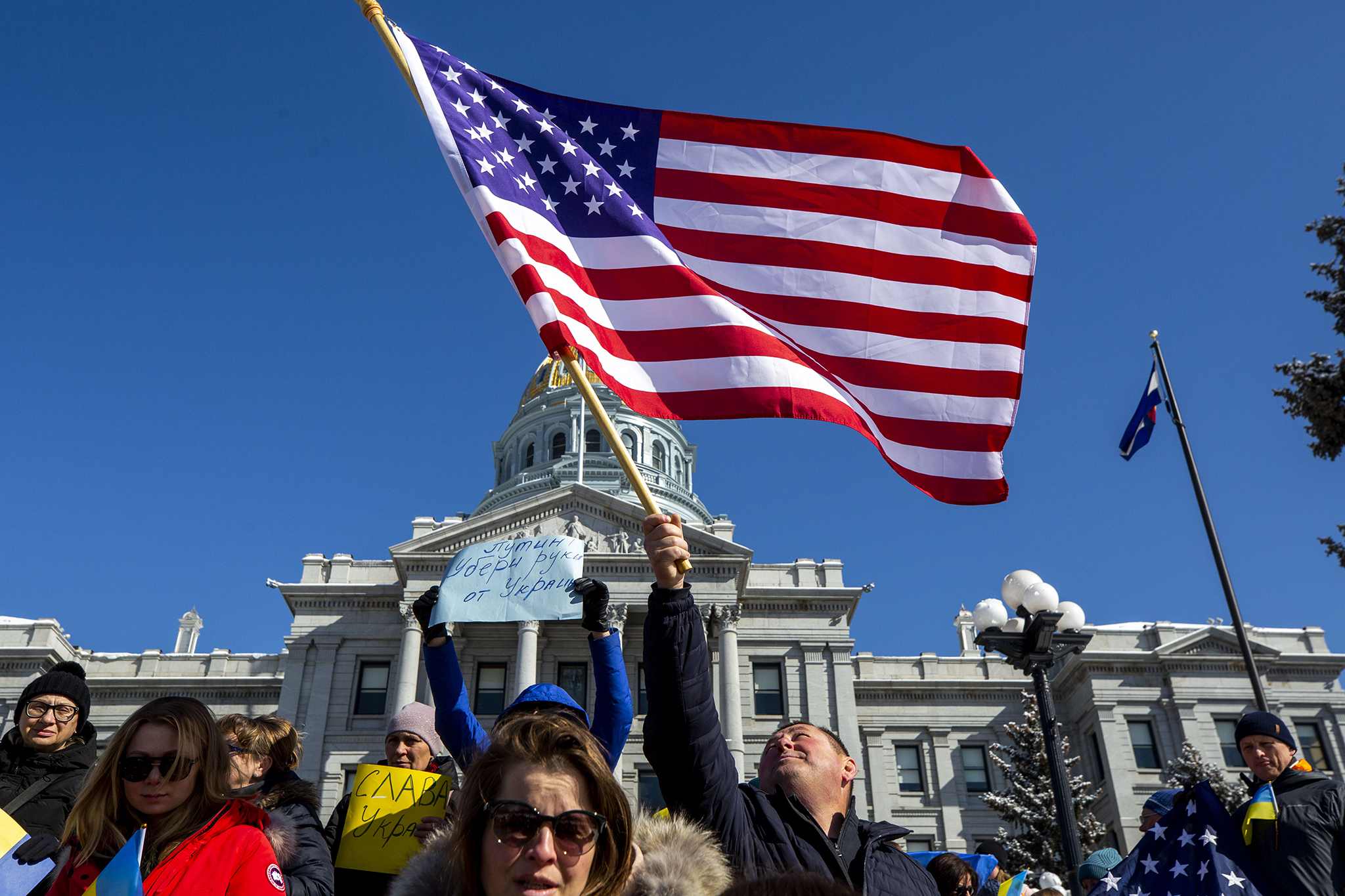 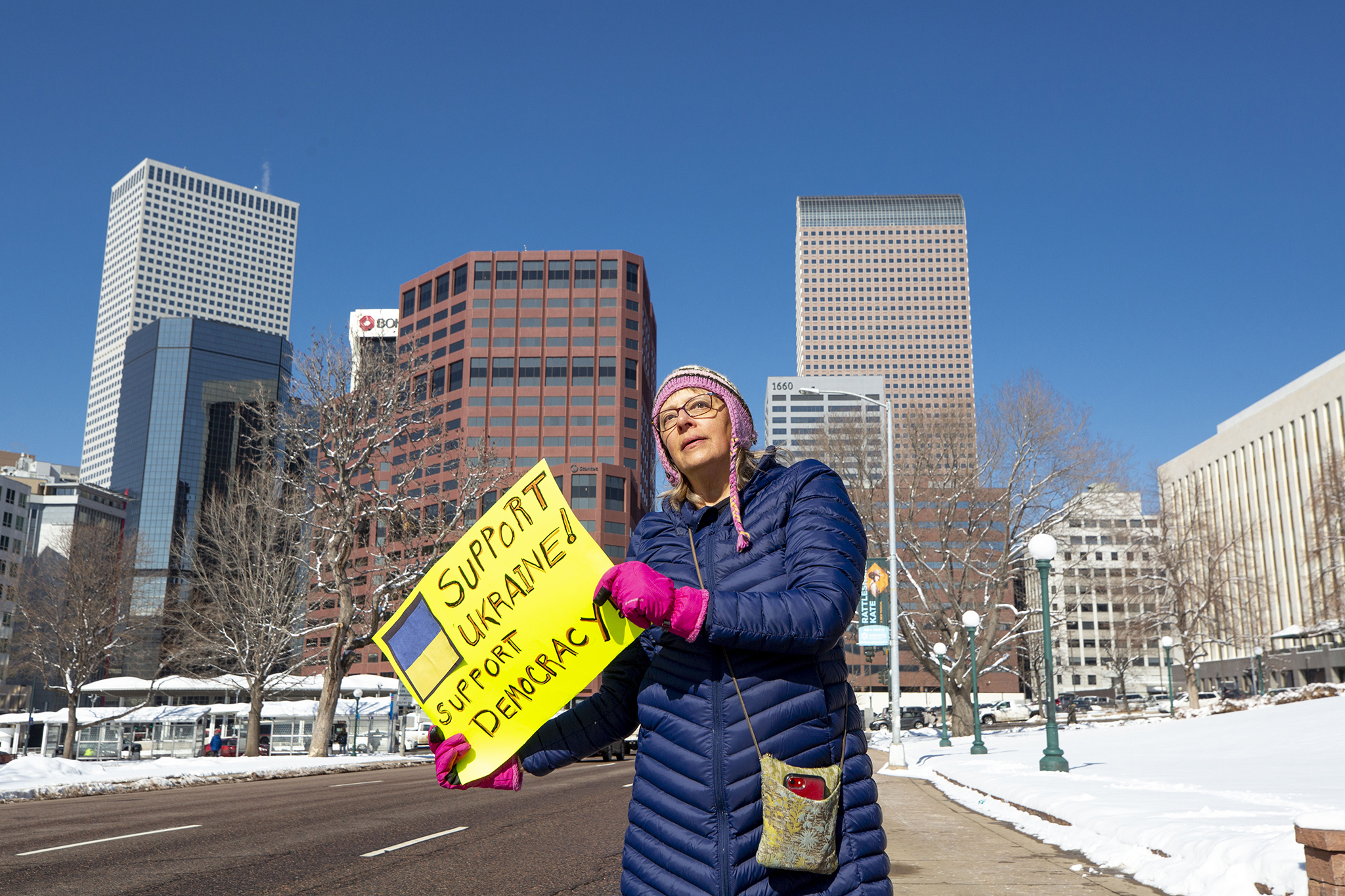 Kevin J. Beaty/DenveriteTheresa Tomich holds a sign along Broadway during a rally for Ukraine on the Colorado Capitol steps. Feb. 24, 2022. 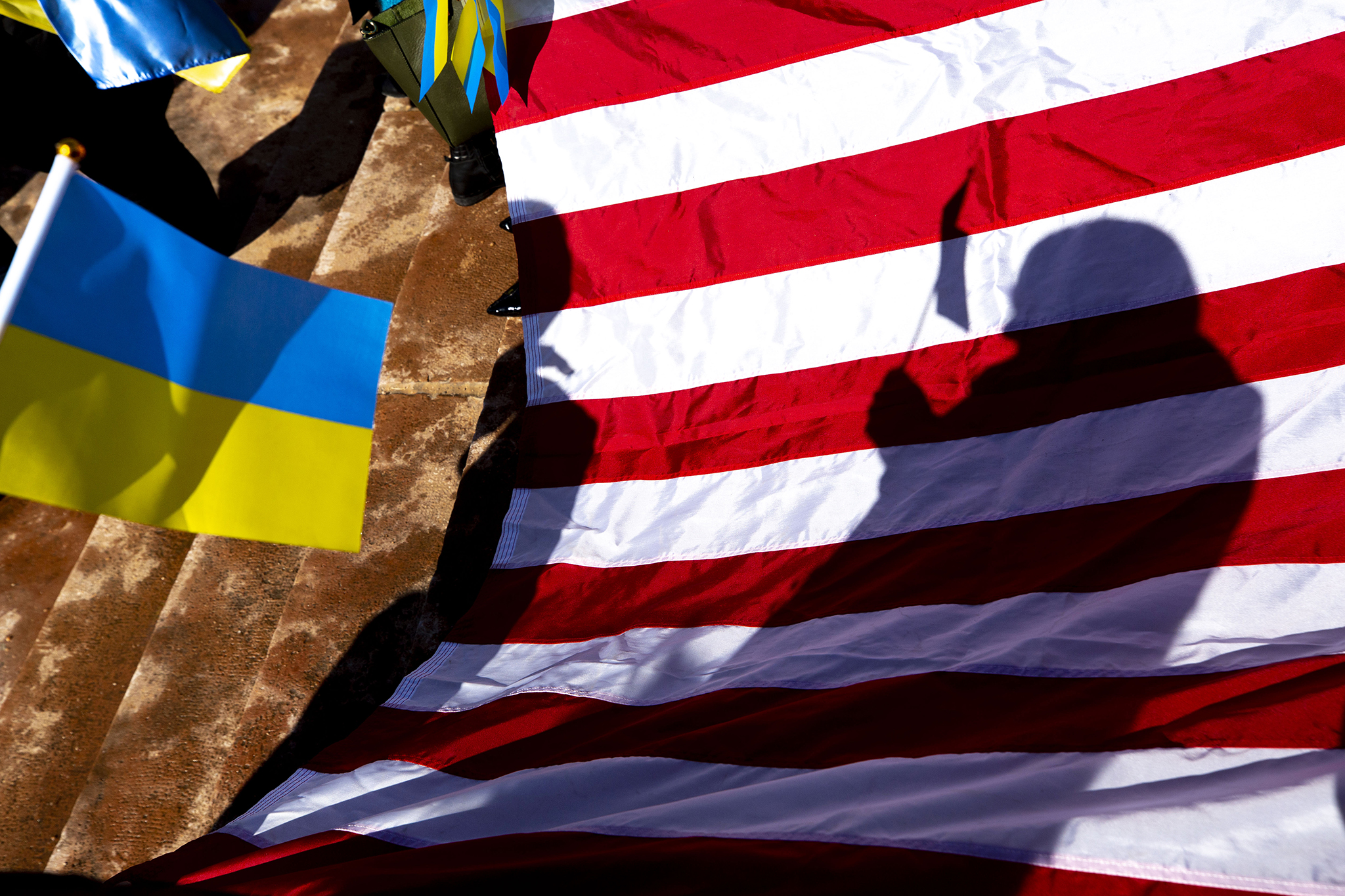 American and Ukrainian flags at a rally against Russian aggression on the Colorado Capitol steps. Feb. 24, 2022. 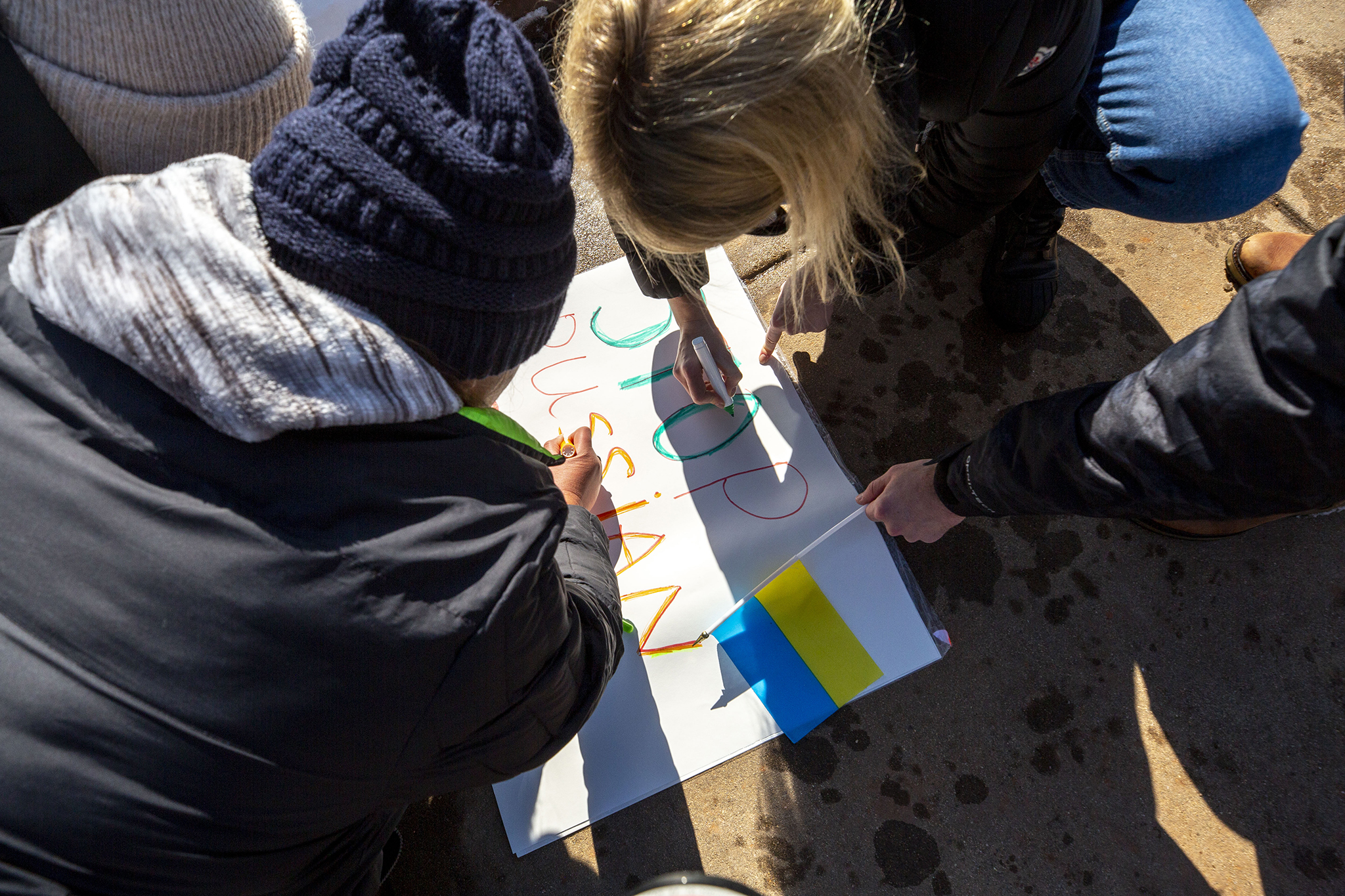 Kevin J. Beaty/DenveritePeople write "STOP RUSSIAN AGGRESSION" on a sign during a rally for Ukraine on the Colorado Capitol steps. Feb. 24, 2022.

More of our coverage on the Russian invasion of Ukraine: