Denver has a plan to house 250 chronically homeless people. That's notable in itself, but the funding behind the plan is what's catching attention.

Under the plan, Denver won't pay for the supportive housing program with tax-payer dollars. Rather, the city will allow investors to bet on the success of  the program. In this case, Denver has raised $8.6 million from foundations, a bank and other organizations. The city plans to use that money -- along with public funds -- to operate supportive housing that keeps homeless people sheltered and out of the justice system.

These kinds of programs are called pay-for-success contracts or social impacts bonds. If they work, the investors make a profit as the city saves money. If they don't, the investors lose most of their money.

The Denver City Council approved the two contracts for the program in a 10-2 vote last month. Cary Kennedy, Denver's outgoing chief financial officer and deputy mayor, designed the program. She had the help of Tyler Jaeckel, a fellow from Harvard's Government Performance Lab. If all goes as planned, they are set to launch the nation's ninth pay-for-success program this month.

Who is Denver trying to help?

There are about 800 chronically homeless people according to a 2015 survey by the Metro Denver Homeless Initiative. These are people who have been homeless for a year or more or experience repeated bouts of homelessness. 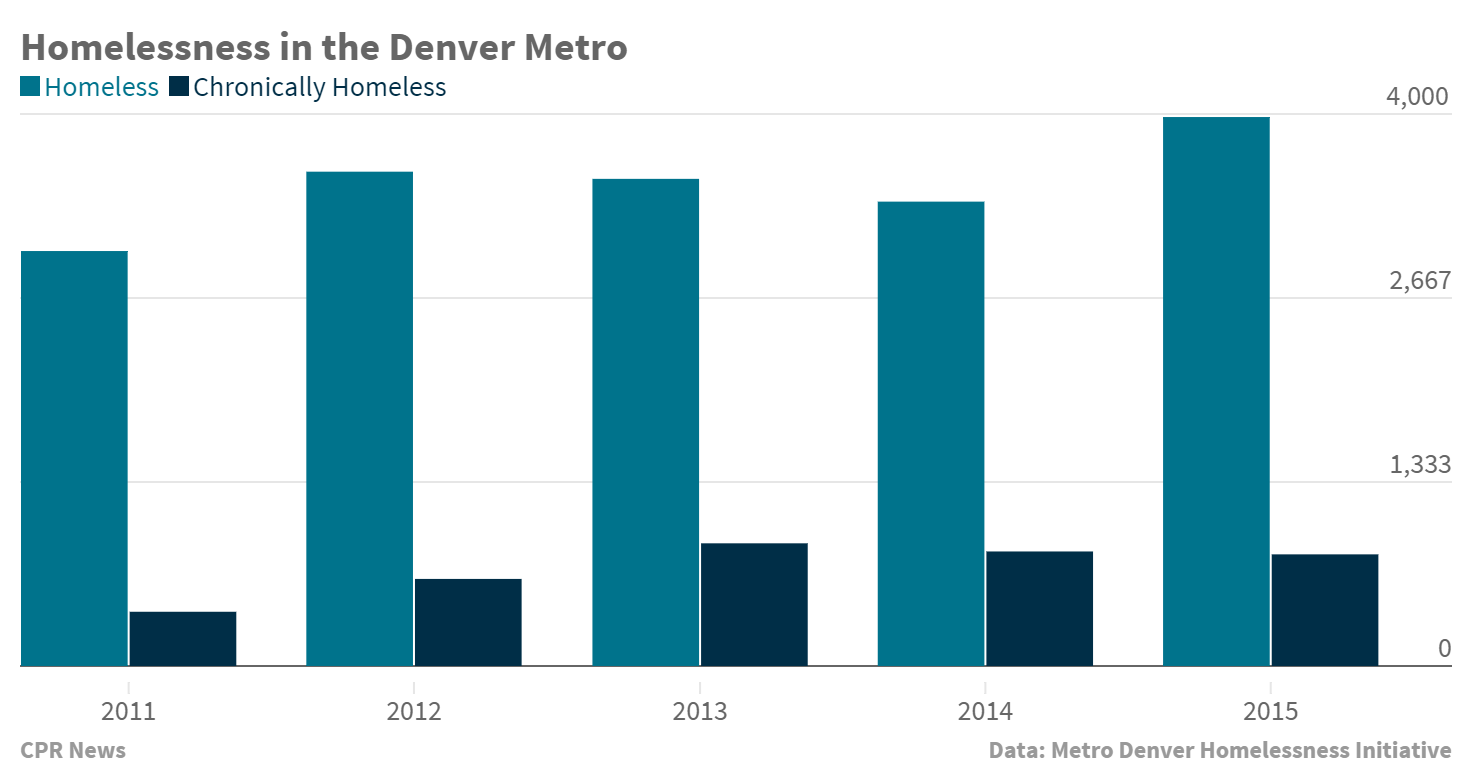 The city and county of Denver identified 250 chronically homeless people who cost the city the most money because of frequent visits to jails, detox facilities and emergency rooms. Many struggle with addiction and substance abuse. The city estimates their use of city services costs Denver taxpayers over $7 million per year.

How will the city help them?

Denver plans to move the costliest of the chronically homeless into supportive housing, which amounts to subsidized housing that includes supportive services. The programs have proved effective in reducing homelessness--and its public costs--in Denver and other cities.

The Colorado Coalition for the Homeless and the Mental Health Center of Denver would raise the money to build 210 new housing units across the city. The program would also use 40 other existing units. The organizations would then coordinate personalized care for future residents. 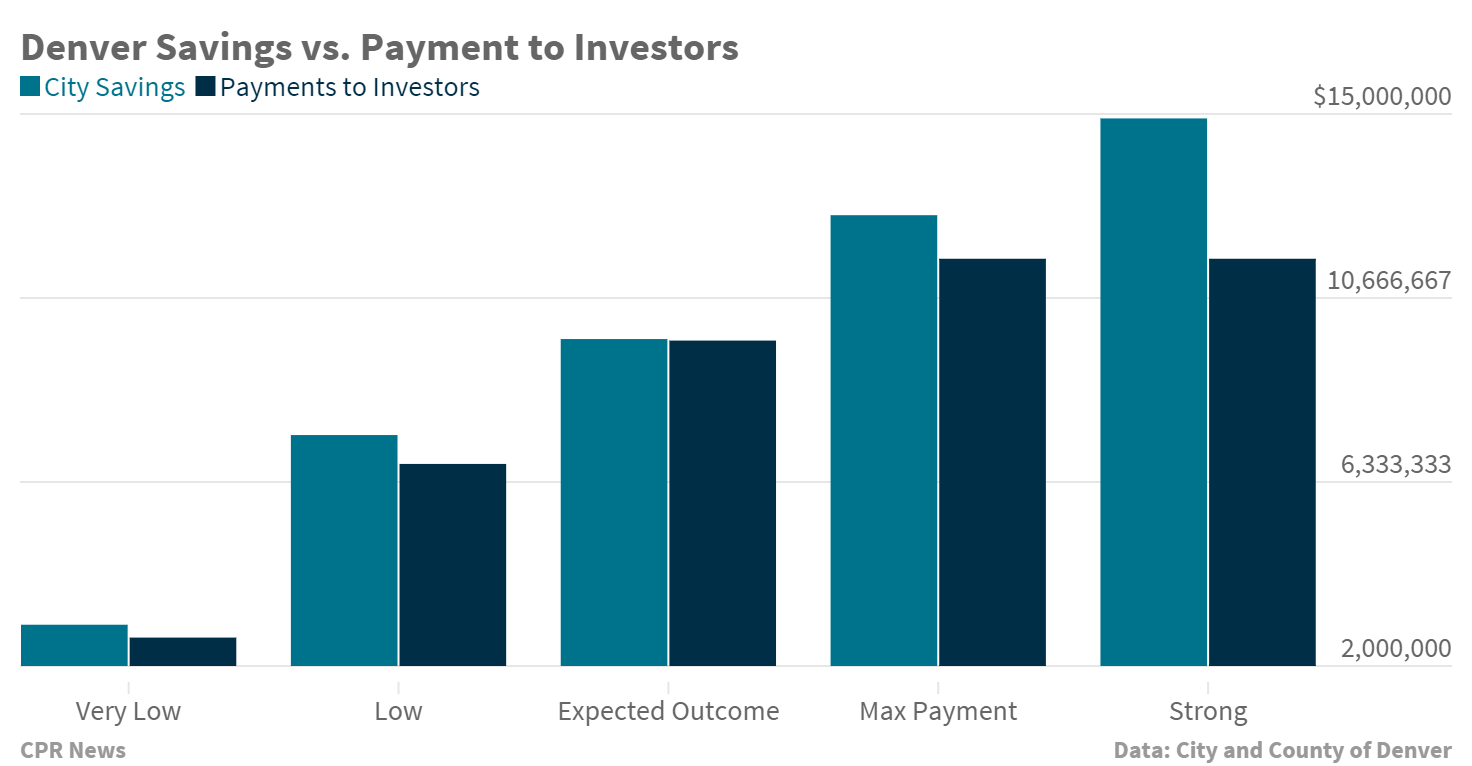 The city of Denver hopes the program will save money. It estimates that each program participant costs the city about $29,000 per year when justice system and medical service resources are factored together. Once in supportive housing, those costs should drop by more than half as the participants avoid jails, hospitals and detox facilities.

How much money do the investors stand to make or to lose?

That depends on the relative success of the program. Denver has collected $8.7 million from five investors including the Northern Trust Co., a Chicago Bank with a Denver office. The Walton Family Foundation and the Non-Profit Finance Fund have also contributed.

Usually, investments depend on the earnings of for-profit companies. In this case, the gains or losses are tied to two social outcomes: the housing stability of the program participants and the reduction in time they spend in jail.

The city and the program funders have agreed on returns  based on those two metrics. For instance, Denver would only pay back about $3 million  over the course of the program if the program has a "very low" success scenario. That would mean half the participants stayed in housing and spent just as many nights in jail as they had before. If the program succeeds at rates of similar projects, then the investors make about $1 million. But investors could make up to $3 million if all participants stay in the housing and spend 65 percent fewer nights in jail.

The city has contracted the Urban Institute, a national group that studies economics and policy, to monitor the outcome and savings. The group will collaborate with local partners.

So if the program works, it's more expensive because Denver has to pay extra to investors. So why didn't Denver just pay for the same program with tax dollars?

According to Kennedy, the city opted for this funding model because it has advantages over traditional tax dollars. The contracts transfer risk from the public to the private sector. So if the program fails, the for-profit investors share the losses with the city. That should give Denver and care providers the freedom to experiment with social programs.

Further, the contracts make it so the success of the program has financial consequences for the investors. She says that should make all involved more accountable to the results of the program.

But Councilman Kevin Flynn voted against the contracts because he thinks Denver should have funded the program directly. Rafael Espinoza made the only other no vote for the same reason.

"If we believe this program saves taxpayer's money, we should fund it up front and save that money ourselves," he said.

Does this reduce homeless people to vehicles for profit?

The program does tie profits to the choices and habits of homeless people. But Kennedy and Jaeckel say that shouldn't create real-world problems. That's because they designed the program to avoid conflicts between good care and strong profits. For instance, the number of hospital visits a participant makes doesn't determine any of the financial outcomes.

"You don't want people to get denied going to the ER because that would mean more money for investors," explained Jaeckel. "We don't want that to even enter the case manager's head."

Even so, some see a problem in the prospect of profit, whether or not it creates conflicts in care. The profits depend on what a homeless person decides to do, or not to do. In a piece for Jacobin Magazine (a socialist quarterly), critic Chris Maisano argues that pay-for-success contracts reinforce the view that problems like homelessness are the result of individual actions, not structural forces like inequality or expensive housing.

How have other cities done with pay for success programs?

Pay-for-success contracts are too new to have a proven track record. The idea originates from a 2010 program in Peterborough, England, aimed at reducing recidivism rates among prisoners. The idea has caught on in the U.S. with  some high-profile help from former New York City Mayor Michael Bloomberg, New York Gov. Andrew Cuomo and even President Obama.

A New York City program is the only one to have failed in the U.S. so far. It aimed to reduce the rate a which juveniles released from the city's Rikers Island prison commit new crimes. It shut down last summer after failing to meet the program goals. New York City didn't pay for the program, which some have said proves the success of the finance model.

Other pay-for-success programs in the U.S. aim at a range of social problems. Chicago and Salt Lake City are using the funding structure to expand pre-k education. And like Denver, Massachusetts and Cleveland have pay-for-success contracts to house the homeless.

Will this program end homelessness in Denver?

Not nearly, but Kennedy says it could expand if successful. Last year's survey by the Metropolitan Denver Homeless Initiative found 5,812 homeless people in the Denver metro. This program aims to help 250 people--less than a third of the city's chronically homeless.

But Denver Mayor Michael Hancock sees the program as a piece of a broader effort to tackle homelessness across the city.

"It makes no sense to continue paying the high cost of ineffective remedial and emergency care systems when we can invest in proven programs that will set these individuals on a healthier path," said the mayor when he announced the program in 2014. “Now is the time to break the cycle from streets, to emergency rooms, to jails and back to the streets, and replace it with a long-term solution."