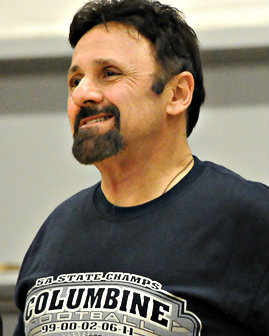 DeAngelis, who was principal when the shooting happened in 1999, spent 35 years at the school as a teacher, administrator and coach. He will retire in June.

After the shootings at Sandy Hook Elementary School in December 2012, DeAngelis told Fox 31 Denver that after the tragedy at Columbine, where 12 students and teacher died, he hoped that was the last school shooting he would ever read about.

"I was being naive," DeAngelis told the local Fox channel.

DeAngelis has been called on to help the Sandy Hook community heal, and he was also called after the shootings at Virginia Tech in 2007.

"I'm part of a club no one wants to be a part of," DeAngelis tells Colorado Matters host Ryan Warner. "But if I can go out and help others get through these tough times, I'm there for them."

He announced his retirement last August. In an email to students, parents and teachers, DeAngelis wrote that his "heart will always be with Columbine."