The latest Masterpiece Cakeshop court battle is over, but the bigger questions around religious freedom and LGBTQ discrimination remain.

Colorado Attorney General Phil Weiser and Christian baker Jack Phillips both dropped their legal pursuits against each other on March 5.

Masterpiece Cakeshop faced another anti-discrimination complaint in 2017 after Phillips declined to bake a cake intended to celebrate a gender transition. Phillips in turn sued the Colorado Civil Rights Commission for a second time.

The U.S. Supreme Court intentionally left the overarching issue — whether public accommodations laws that mandate that LGBTQ people be offered the same service as everyone else trump the right to discriminate on the basis of religion or free expression —  undecided when it ruled on the previous Masterpiece case. Instead, the justices’ focused on how the  civil rights commission handled their case against Phillips. The area of the law remains unsettled as several similar challenges bubble up in state and federal courts nationwide.

The make-up of the nation’s high court has also shifted, with the retirement of Justice Anthony Kennedy and the tumultuous arrival of Justice Brett Kavanaugh.

Law Professor Jim Oleske, who specializes in religion and the law at Lewis and Clark College in Portland, spoke to Colorado Matters about three cases that could come to define the issue. Two of the cases are represented by the same legal team as Jack Phillips, the Arizona-based conservative legal organization the Alliance For Defending Freedom.

A similar case to that of Masterpiece Cakeshop emerged in Oregon.

When the Sweet Cakes by Melissa bakery refused to sell a wedding cake to a same-sex couple, the state’s Bureau of Labor and Industries charged the small business with a $135,000 fine. The bakery owners sued.

“It’s more likely it could be a vehicle for deciding the bigger issues,” he said.

A case awaiting decision from the Arizona Supreme Court could define which businesses are eligible for defense on the grounds of artistic expression and free speech. 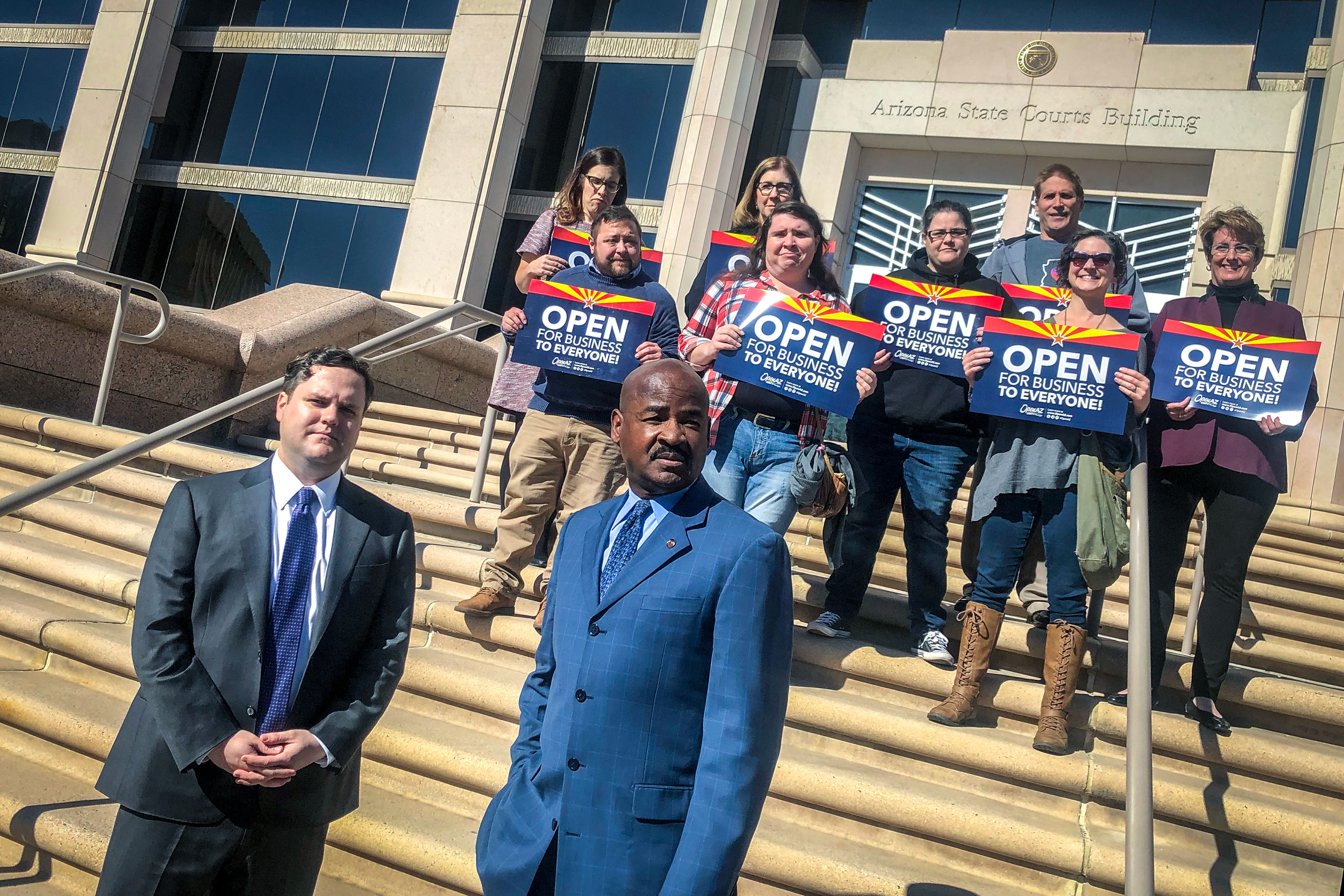 Courtesy of Will Stone/KJZZ News

The Phoenix-based Brush & Nib Studio designs custom invitations for events, including weddings. The owners say making an invitation for a same-sex wedding would violate their Christian belief that marriage is only between a man and a woman. In advance of any complaints, they've filed a challenge to the city of Phoenix's anti-discrimination law.

The state Court of Appeals ruled in favor of the city’s ordinance in 2018.

Oleske said the case could help define what businesses qualify as art, therefore placing them under the protection of the First Amendment. Caterers and hotels would not qualify, for example, but calligraphers and photographers could.

“Some are arguing calligraphy is inherently expressive in a way that baking cakes is not or making floral arrangements is not,” Oleske said.

“Of course then, you have to decide who’s on each side of that line.”

Shortly after the U.S. Supreme Court ruled on Masterpiece Cakeshop, it decided not to hear this case from Washington, and asked the state Supreme Court to reconsider.

In 2013, Barronelle Stutzman denied services from her shop Arlene’s Flowers to a same-sex couple who sought floral arrangements. The Washington Supreme Court previously ruled in favor of the couple.

Oleske said he expects to see a lot of “friend of the court” amicus briefs filed in this case’s second run at the state Supreme Court. Amicus briefs offer high courts additional insight and holistic perspective on the issues central to a case, and usually signal a legal battle’s importance and potential widespread consequences. For example, Oleske filed an amicus brief of his own on religion and law for the Masterpiece Cakeshop case in the U.S. Supreme Court.

“There’s a sense that this might be the case, the one that the Supreme Court takes up ultimately to resolve the issues that were left unresolved with Masterpiece,” Oleske said.

Editor's Note: This story was updated to clarify that the Alliance Defending Freedom represents Phillips, as well as Brush & Nib and Arlene's Flowers. Brush & Nib's case is a pre-enforcement challenge to the ordinance in Phoenix, AZ.