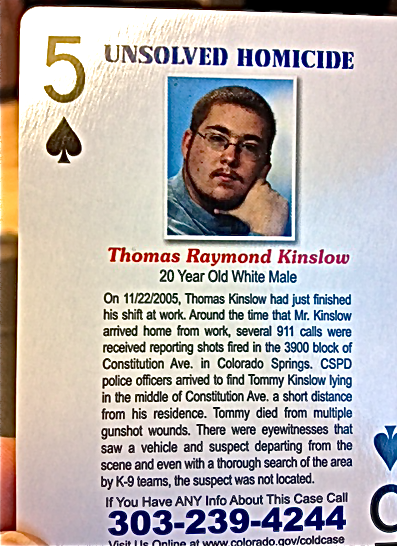 (Courtesy Colorado Bureau of Investigation)In hopes of solving cold murder cases, the Colorado Bureau of Investigation is distributing playing cards to state prisoners. On each card is a name, a picture, and a story. Tommy Kinslow is the Five of Spades. His round face, framed by glasses, peers from the card. It says he was 20 when one night, a decade ago in Colorado Springs, somebody killed him on his way home from work. His mom, Pam Kinslow, saw flashing emergency lights from her window and a body lying in the street.

"He was a big boy, and I could just tell that was him," Pam Kinslow said. "My husband put his arms around me and told me it would be okay and we both knew it was never going to be OK again."

Tommy Kinslow is among the state's roughly 1,700 unsolved murder and missing persons cases. The CBI distributed decks of playing cards with victims on them to prisons about a year ago. Investigators say inmates may have knowledge about crimes that they have kept to themselves. The cards may prompt them to share what they know. Several tips have come in, and officials say they want to print more cards -- with more faces -- to expand the effort. CBI analyst Audrey Simkins, who oversees the database of these cases, spoke with Colorado Matters host Ryan Warner.