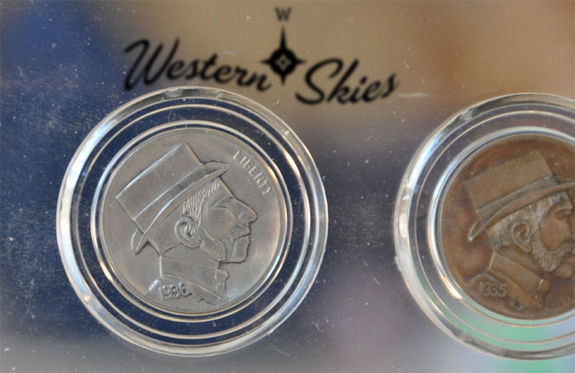 It’s no secret that the economy is in pretty bad shape. This month, we’re talking with people across the spectrum to see how they’re faring, what kind of ideas are making an impact, and how even art can grow in uncertain financial times.

You can download the full episode, or listen to it here:

You can also head to the individual segments for the audio and web extras by clicking on any of the following:

Roundtable: The Economic Climate in the Pikes Peak Region

We begin with a roundtable discussion about the economic climate in the Pikes Peak Region. Craig Richardson sat down with Colorado Springs Mayor Steve Bach, University of Colorado at Colorado Springs professor and Director of the Southern Colorado Economics Forum Fred Crowley, and the Gazette’s economy and finance reporter, Wayne Heilman.

You can download or listen to the conversation as aired (about 24 minutes):

You can also listen to or download the full conversation here (about 56 minutes):

For many, the word "barter" conjures up images of yesteryear, trading one goat for 15 chickens, for example. But imagine trading some roof work for a massage, or an up-do for some feng-shui. That’s what one Southern Colorado group aims to do and as KRCC’s Andrea Chalfin found out, especially in this economy, the notion of bartering has a place in the 21st century.

Earlier we heard about how the current economic situation is playing out in Colorado Springs. For a more national perspective, we turn to Roger Myerson. Myerson is a professor at the University of Chicago, and the winner of the Nobel Prize in Economics in 2007 for his work on mechanism design theory. KRCC’s Noel Black spoke with him while he was in town last month for a lecture at Colorado College.

A recent outbreak of listeria linked to cantaloupe has sickened more than 80 people in 19 states, including at least 15 deaths. The outbreak has been traced back to a farm in eastern Colorado near the Kansas border, and has practically ended the cantaloupe-selling season this year. Normally cantaloupe farming in the state is a sweet industry. Farmers harvested nearly 2,200 acres of the fruit in 2010, generating nearly $8 million according to the Agriculture Department. While state and federal investigators are still trying to figure out exactly how the bacteria infected the crop, KRCC’s Jennifer Yachnin spoke with Colorado farmers who are already focused on salvaging their reputation in time for next season.

The Nickel as a Canvas

As the economy continues to sputter, one local artist is reviving an art form that allowed down-and-outers in the early 20th-Century to turn nickels into, well, maybe not gold, but a lot more than a nickel. KRCC’s Noel Black reports.

Postscript: We checked with the American Numismatic Association, and it IS legal to deface US money of any kind as long as your don’t try to pass it off as a different denomination.