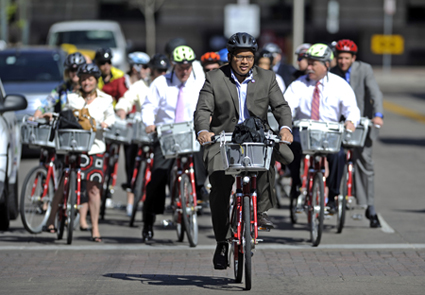 Colorado is promoting its relatively healthy residents to lure new businesses to the state, arguing that able-bodied people are more productive and may cost less to insure.

Tom Clark, CEO of the Metro Denver Economic Development Corp., says companies are beginning to pay attention, because “they’re going to save a boatload of money with this workforce.”

Clark said about 30 percent of companies inquiring about moving to Colorado consider this as one of their factors. “They all know we’re the skinniest state.”

In addition to having the nation’s lowest obesity rate, Colorado is currently ranked second lowest for diabetes, third in cancer deaths and fourth in cardiovascular disease, according to the United Health Foundation’s 2011 rankings.

Clark will be speaking in detail on this subject at the Colorado Business Group on Health conference in Denver on Tuesday, April 10. In an interview he said he was surprised the first time a top corporate relocation firm asked for Colorado county-by-county obesity rates on behalf of a client. The firm explained, “It’s all about productivity.”

Clark said he soon learned that morbidly obese people are 34 percent more likely to be absent from work.

“The impact on productivity is staggering,” he said. “I saw it as a comparative advantage for us.”

“Very few states can stand up against us and say they have the healthiest workforce,” he said.

DaVita, a kidney dialysis company, counts the “disproportionately healthy population” as one reason for moving its headquarters to Denver in 2009, said Bill Myers, vice president of communications. That and the things that make Coloradans healthy – the mountains, access to outdoor activities, and the like – are good for the DaVita team, physically, mentally and spiritually, he said.

Clark is being encouraged in branding the state this way by Dr. James Hill, director of the new Anschutz Health and Wellness Center at the University of Colorado health sciences campus in Aurora.

“Mississippi would never use that as a marketing ploy,” Hill said. Mississippi has one of the most obese resident populations in the nation.

However, Ronald Pollina, a corporate site selection expert and the source of a widely reported ranking of the best states for business climate, said most companies look to factors like tax rates, right-to-work laws, incentives, quality of life, and the debt level of state governments. Colorado ranked 14th on his survey in 2011.

“I’ve never in all my years had a client ask” about the health of the population, he said.

The health argument would work better, Pollina said, if Colorado could prove higher productivity and lower insurance rates. Productivity is particularly difficult to measure, state to state. “If people are healthy, they will be more productive,” he noted. “But when people take time off from work – they’re not always sick.”

Currently, Colorado’s health insurance costs are 17th highest – significantly more than Clark thinks the 9th healthiest state should be. Why Colorado is not enjoying lower insurance rates is not completely clear. However, Clark says one reason may be the high number of uninsured people in the state – one in six residents. Their unpaid medical bills get transferred to insured people.

Also, Colorado’s hospital market is dominated by the for-profit chain, HCA, which must pay taxes up to 35 percent, Clark said. When he asked nonprofit hospitals how they set their rates, he was told they peg them to HCA rates. “Think of the margin there is,” he said.

In fact, a recent Colorado Public News report found most Colorado hospitals reported healthy pre-tax profit margins on their required reports to Medicare. St. Anthony Summit was at the top, with a 31 percent profit. HCA Health One reported it had a 21 percent profit in Colorado, though the company also said the data does not include all its costs.

Clark added that there may be other reasons for the state’s high health insurance rates.
Meanwhile, large companies do well if they self-insure and take on the risk of health care costs for a relatively healthy Colorado workforce. “If you self-insure like Xcel, you make out like a banshee,” Clark said.

There are downsides. Companies increasingly pay employees to become healthier, but “some of this is very intrusive,” including requiring blood tests, Clark said. Employers are worried about being sued.

So far, cash incentives seem to work best to persuade employees to take good care of themselves. But Clark said employees are let down when they are taxed on the incentive payments at the end of the year. He’s even asked Colorado lawmakers to try to exempt health incentives from taxation.

Companies choosing to locate in Colorado for a healthy workforce may not be far from deciding to hire only healthy-weight staff, and rejecting the half of Coloradans who are overweight. Employment attorney Steve Gutierrez of the law firm Holland & Hart says that’s legal. And he believes some companies are already doing that.