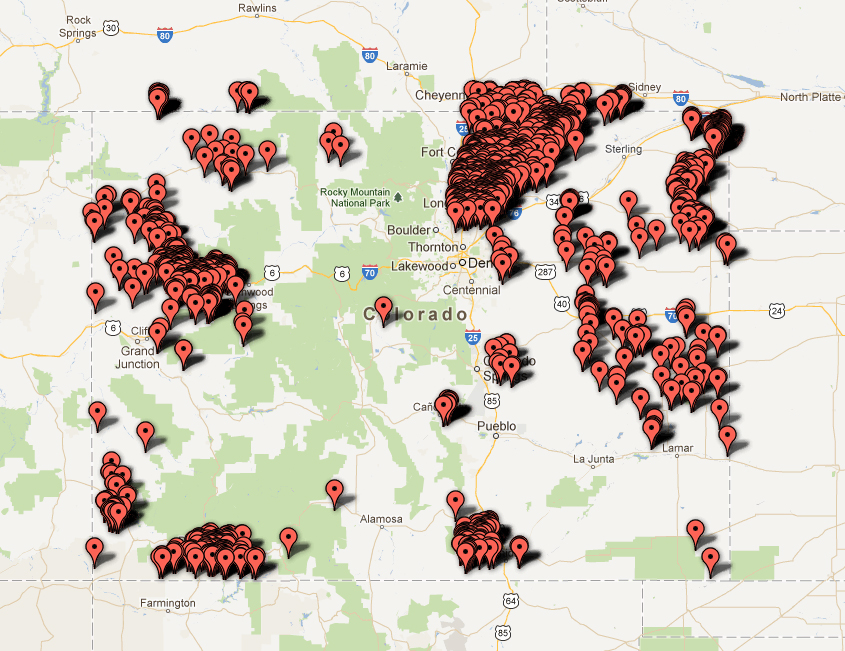 See below for charts from the Colorado Oil and Gas Conservation Commission depicting wells by county per year, and total wells by year.

Urban oil and gas wells pop up across Colorado, but number of permits decreasing

Oil and gas wells have moved into urban and highly populated areas of Colorado – in some cases literally bumping up against residential back yards. Yet the number of permits being issued by the state actually has dropped in half over the past several years.

Most of the new permits are going into the oil-rich Niobrara formation, which has drawn the attention of many oil and gas companies to Colorado. Known in the industry as a “play,” the vast underground shale formation largely spreads from Eastern Colorado into Wyoming. It has caused a significant increase in drilling enthusiasm.

Todd Hartman, spokesman for the Colorado Oil and Gas Conservation Commission, cited a combination of factors for an actual decline in permits being issued. Decreasing natural gas prices are providing less of an incentive for companies to make big investments in gas sites, he says. And, innovations in drilling technology are making wells more efficient.

The number of permits issued by the Colorado Oil and Gas Conservation Commission peaked in 2008 at just over 8,000. It’s been steadily dropping since then. 2011 closed out with just over 4,600 permits and, as of the end of May, about 1,500 permits have been issued for 2012.

Headwaters International, a Bozeman, Mont.-based nonprofit natural resources consulting firm, reports the monthly market value for Colorado was $351 million for oil, compared with $243 million for natural gas. Policy director Chris Mehl says this is the first time in more than a decade that the price of oil has overtaken the price of natural gas.

“Any drilling right now is significantly on the oil side,” said Mehl, citing economic incentives for companies to invest resources in oil drilling sites.

Mehl says the profit margin for natural gas is so low that some sites have stopped new production of natural gas.

The oil in the Niobrara is being unlocked largely though by hydraulic fracturing, or fracking, a controversial process of pumping highly pressurized liquids into the well to create cracks deep underground. The use of fracking technology and horizontal drilling, in which drillers sink a well that can then run horizontally though the formation, can significantly increase production for a single well.

Weld County in northern Colorado lies on top of a significant portion of the Niobrara formation, and the place where the most dramatic increase has occurred in the last few years. Last year, Weld County held almost half all permits issued in the state – more than double the 2007 numbers. The county is on track to hold a majority this year as well.

David Bauer, engineer for Weld County, says that while most of the rigs are going into rural areas, it is difficult for anyone to ignore the commotion that drilling is causing in more urban areas of the county. For example, one rig is currently approved within 500 feet of a residential neighborhood in the middle of Greeley.

“It’s a change for the people who are not used to seeing a drill rig or the traffic that results,” said Bauer. “So that’s a change that I won’t say upsetting, but maybe concerning.”

Bauer says that in his two and a half years in the job, there have been 5,500 new permits in Weld County.

Noble Energy is a major driller in the Colorado portion of the Niobrara. Company spokesman Jonathan Ekstrom says the number of barrels of oil it’s producing has more than quadrupled in the past year.

Ekstrom says that while the company remains active in natural gas, it has adjusted its focused to oil based on current and projected prices.

Anadarko Petroleum spokesman Brian Cain said his company has invested about $1.5 billion in capital in Colorado since 2007, and plans to invest another $1 billion this year.

“We’re definitely seeing activity increasing there, and the reason for that also is because of the nature of the play itself — this is a very liquids-rich play,” said Cain, referring to the nature of the oil and gas being extracted. “Those products are more valuable, they receive better pricing in the market, than just dry gas alone.”

Noble Energy also announced its plans to expand operations in Colorado with an $8 billion investment over the next five years. Noble opened a new operations center in Greeley this month, and employs 750 people across the state.

Click on each image for a larger chart. Source: Colorado Oil and Gas Conservation Commission