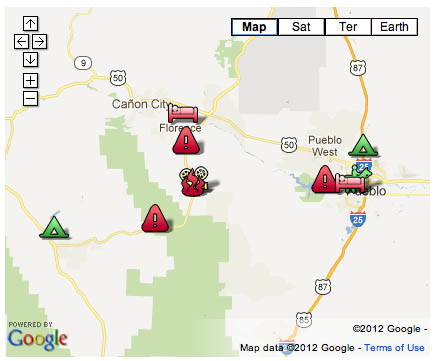 The Wetmore Fire remains at about 2100 acres, and is 65% contained. Around 240 personnel are working the fire, and with lower temperatures and higher humidity, crews made significant progress today. People may see light smoke in the interior of the burned area, but evacuations orders for all residences outside the fire perimeter have been lifted. Greenwood Subdivision remains under evacuations orders while firefighters assess the safety of the area's infrastructure. All roads within the fire perimeter remain closed, and the cause of the fire remains under investigation.

The Wetmore Fire remains at about 2100 acres, with 15% containment. About 300 people are working the fire. Evacuations have been lifted for all residences outside the fire perimeter, and Greenwood Village remains under an evacuation order. Both Colorado Highways 67 and 96 are reopened, while roads within the fire perimeter remain closed. The cause of the fire remains under investigation.

The Bureau of Land Management says the Wetmore Fire is about 2100 acres with 15% containment. Evacuations of about 250 residents from Wetmore and Greenwood subdivisions are still in place. Highway 96 is closed from Lake Pueblo State Park to Westcliffe; Highway 67 from Florence to Wetmore is closed. The cause of fire still under investigation.

The American Red Cross shelter set up at the First Southern Baptist Church in Florence will transition to standby status by 8:00 this evening.

Evacuee meetings Thursday, 1:00 at the Baptist Church in Florence. The fire is 15% contained.

SOME evacuations for Pueblo County residents have been lifted. Residents north of CR 3251 and west of Siloam Rd. are still under evacuation orders. Others across Pueblo County who are permitted to return home can go to a traffic control point at Red Creek Springs and HWY 96 W. People will need proof of residency to re-enter, and these area will remain on pre-evacuation status.

The Red Cross shelter at First Nazarene Church in Pueblo will close at 5:00 PM today. The shelter in Florence will remain open.

14 residences and an unknown number of outbuildings have been damaged or destroyed in the fire, which has grown to about 2200 acres. 2000 of those acres are in Custer County; 200 in Pueblo County. Evacuations remain in place for around 378 homes across both counties. The fire remains at 0% containment.

The USFS says the Wetmore Fire has burned an estimated 1000 acres about a mile west of Wetmore. Crews consist of 130 firefighters from more than 16 agencies. High winds have meant extreme fire behavior, and that aerial resources were not able to fly. Custer County Sheriff Fred Jobe says around 386 residents are evacuated.

At a press briefing just before 9 PM, US Forest Service Spokesman Ralph Bellah said the fire was at least 1000 acres. There are 12 unconfirmed structures damaged. Winds continue to pose an issue, with an average gust of 50 mph during the day Tuesday.

Reverse 911 was being utilized, but due to fire damage of utility lines, a multi-agency, house-to-house notification was implemented.

The Red Cross is encouraging evacuees to register with Safe and Well, which helps enable friends and family to know you are safe.

Fire suppression efforts are expected to continue overnight. In Pueblo County the primary focus will be on protecting the 25 homes that are closest to the fire line.

Since state and federal fire resources have been requested, Sheriff Kirk M. Taylor has agreed to delegate authority of this event to a Type II Incident Management Team. The team will arrive tomorrow evening in Florence and receive critical situation updates prior to assuming command. Sheriff Taylor has requested a member of his Command Staff remain an active part of this decision making team to minimize costs to Pueblo County.

The American Red Cross Reception Center at Church of the Nazarene, 84 Stanford Ave, remains open for those displaced by the Wetmore Fire. They have assisted several people offering food, shelter, and referral to community resources.