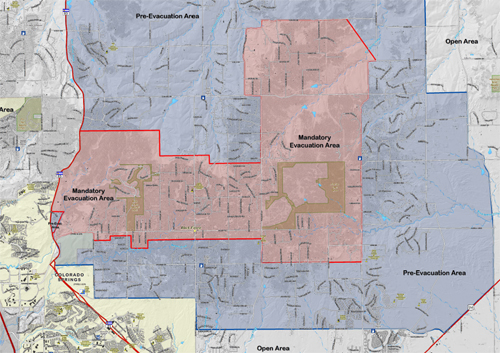 The following roads north of Shoup Rd. and west of Tahosa Ln. are now open. Tahosa Lane is not open as a part of these downgrades.

Residents trying to reenter will need to show their driver’s license or registration. Residents are encouraged to leave heavy equipment alone. Please do not remove the flags on your property. Those are a signal to first responders the area has been cleared for reentry.

Map of current evacuation zone as of 10 AM today.

The Black Forest Water Distribution Center located at Black Forest and Burgess Roads is an approved water source for use by residents affected by the Black Forest Fire. Residents of areas where mandatory evacuations are lifted who need potable water can use this 24-hour self serve option. People who use this service are asked to please make sure the water source is closed and turned off after use so water is not wasted. Plastic water containers have been donated and will be available at the distribution center for individuals that need water containers. As a guideline, people need a minimum of 2 gallons of water per person, per day.

Another day of no growth, no loss of structure and we’ve begun and “aggressive repopulation” effort to get more people home.

Planning to open another section later this evening. Pressing the firefighters to say when they can render these areas safe. Bridle Bit area will open at 8 this evening. Tahosa Lane will not open. It still has hotspots.

Late yesterday afternoon saw a flare up on Mt. Herman Road. An example of the fire season we’re in.

Will be in discussion with fire officials tomorrow to consider opening the area west of Meridian up to fire line. Pretty confident will be able to get those areas open.

The area of probably greatest density will remain closed. It’s the corridor bordered by Shoup on south and north to a line above Swan Road. It had the greatest concentration of devastation. Residents are anxious to get in. Says he wants to let them in. But there’s a need to preserve evidence for the potential of prosecution  (Don’t know that it is a crime, but it’s being investigated as such.)

To allow people to go in and trample through compromises the crime scene.

Also, several layers of government are involved. Can’t go back on promises to other agencies on when it’s ok to get everyone home. Once the checklists are complete, it will be a priority to get people in that area home.

“And (for) a lot of you, it’s not going home. You’re going to rubble. And we want to make sure we have the resources you need there. “

The fire teams walk a grid to determine it’s safe. They like to do this three times, but they’ve agreed after one walk, they’ll open up parts of the “Shoup Road corridor” for residents to come see what remains of their property. Announcements will direct residents of the Shoup Corridor to a staging area, and they alone will be escorted in to see the site. If you want to leave quickly or stay for a hew hours, you will be accommodated.

He’s pressuring Rich Harvey to let citizens in, and to focus on hotspots so more areas can be opened. Cautiously expects that tomorrow or Wednesday he’ll be able to start letting people in to look at the Shoup Corridor.

“We have a plan. We’re not ignoring you, and we’re with you.”

It’s a priority to get everyone home, whether you have a home to get to or not.

Another missing person report came in yesterday, but the person was found, so the fatalities remain at 2.

Lack of smoke on the horizon gives false impression that it’s all over. It’s not.

A couple of scares last night from lightening strikes within the fire zone, but they were extinguished.

Trying to make the area safe to visit, in part by downing damaged trees.

Flagging on a mailbox means a crew has been through once on its mission to make the area safe.

Never seen firefighters so happy to see people supporting them along the roads. Some of the crews say they want to come out and greet people but they can’t because they’ll start to cry. This phase of the fire is a “grind” and it’s hard to stay motivated, but the support from the community boosts morale.

Aspen Pointe has mental health counselors at the Disaster Recovery Center. Would like help getting contact info for HOA and neighborhood leaders for recovery phase.

Email is more effective than phone calls as a way to reach him and pass along contact info.

Pre-evac areas will get all their mail today, plus accumulated mail

No significant update on investigation into cause. Waiting for some special equipment to arrive. No new cases of burglary or looting over night.

Message to looters: We will show you the same compassion you’ve shown victims. Looters, you better have your bags packed and get your affairs in order. Because you’ll be evacuated from your home for many, many years.

People returning home may find their doors or windows broken. Report them. They may have been broken by firefighters trying to save the home, or it may have been a burglar. That will be determined.

Clarified the border streets. Residents of west side of Winchester can go home, not yet for the east side. On Hardy Road, the north side can go home, south side residents need to remain patient.

Shoup corridor – Working on a plan to get you in for a visit, in limited access. You’ll later get credentials so you can come and go.

Deputies say they’ve been hugged by many tearful residents. Says this is a hugely emotional time. Encourages people to visit counselors at the Disaster Assistance Center. “It doesn’t mean there’s something wrong with you.”

Says cooperation from residents has improved and there have been fewer people sneaking in. There will be no placard system. Residents do not need placards. (Although Shoup Corridor residents will get credentials.)

11:15 AM:
Latest press conference is about to start. The county has released more are from mandatory evacuation. The following areas have been downgraded to pre-evac:

Residents trying to reenter will need to show their driver’s license or registration. Residents are encouraged to leave heavy equipment alone. Please do not remove the flags on your property. Those are a signal to first responders the area has been cleared for reentry.

Residents need to use the following reentry points:
From the west – use Hodgen Rd. or Walker Rd.
From the east – use Evans Rd. or McCune Rd.
From the north – use County Line Rd. to Black Forest Rd. or Meridian Rd.

The fire remains 65% contained. Those returning to last night's downgraded evacuation areas are reminded to access from the north off Hodgen Road. Electricity was shut off; dumpsters will be available at 10 am at the North Black Forest Fire Station on the turnout at Ridge Run Road and at the Southeast corner of Burgess, and the El Paso County Slash and Mulch Site on Herring Road. Heavy duty plastic trash bags will be available at these sites as well. The next press briefing is at 11:15 AM.

The Disaster Assistance Center is open from 8-6 at the county's Citizen Service Center off Garden of the Gods Road.

Want to volunteer? Email bffvolunteer@elpasoco.com with a specific area of interest for volunteering in the subject line.

For those returning to their homes, the El Paso County Health Department has this page set up for safe cleanup information. They advise residents to contact their insurance companies before starting any cleanup efforts.

Four areas of mandatory evacuation in El Paso County were downgraded to pre-evacuation status last night. Access is limited to residents, who must have a driver’s license or vehicle registration to prove residency. Residents entering the new pre-evacuation area need to enter from the north off of Hodgen Road. Returning residents should be aware of and yield to emergency vehicles. Law enforcement will continue patrols.

1. The area between Highland Estates Drive west to Black Forest Rd, from Walker Rd south to Hodgen Rd. is now on Pre Evac.

3. The a small area just east of Hwy 83 including Abert Way and Chickaree Lane is now on Pre Evacuation

4. The area between Shoup Rd. south to Burgess Rd., from Howells Rd. east to Vollmer Rd. is now on Pre Evac status.
Shoup Road remains closed to all citizens for the safety of emergency personnel and emergency vehicles utilizing the road to continue to fight the fire.
Residents with addresses on Shoup Rd., Donavan Lane, Casey Lane, Glenridge Lane and Clear Lane will not be allowed to access their homes off of Shoup Rd.

Residents should know that electricity was shut off in these areas for an extended period of time, and dumpsters will be available at 10 am at the North Black Forest Fire Station on the turnout at Ridge Run Road and at the Southeast corner of Burgess, and the El Paso County Slash and Mulch Site on Herring Road. Heavy duty plastic trash bags will be available at these sites as well. Regular trash removal will resume on Tuesday.