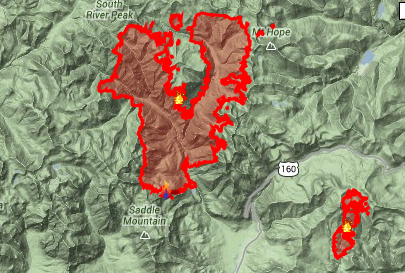 The complex has grown to 75,150 acres with no containment.

A briefing for evacuees and affected residents will be held daily at the Red Cross Shelter in Del Norte at 9 am.

The West Fork Complex is now 70,257 acres. Evacuations and closures remain in place.

Three fires are now a part of the West Fork Fire Complex, adding the Papoose Fire, southwest of Creede. The total acreage is 53,544. They're burning on the San Juan and Rio Grande National Forests in steep, rugged terrain with large amounts of beetle-killed spruce. Highway 160 remains closed, and multiple evacuations remain in effect.

Fire Behavior Analyst Eric Norton said the fire behavior yesterday "was so extreme, it was undocumented and unprecedented." According to the Colorado Office of Emergency Management, it's now about 30,000 acres. The fire burned in a northeasterly direction yesterday, crossing the Continental Divide and burning on the ridge above Big Meadows Reservoir down to Metroz Lake. In some locations the fire is only 1/4 mile from Highway 160. Firefighters were able to hold the fire from spreading to the south and all structures and cabins at Borns Lake were not affected by yesterday’s fire activity.

Officials are using helicopters to drop water, and planes are also dropping retardant to try and keep the fire from spreading north or east.

South Fork is under mandatory evacuation. Red Cross Shelter is Del Norte High School, 1055 9th Street. Del Norte. Fire spokesman Penny Bertram says officials rate the chances of saving the town of about 400 full-time residents as "low to moderate." She says she won't speculate on the likelihood of the town burning, just that it's at high risk. Highway 160 through Wolf Creek Pass is closed.

There is a mandatory evacuation in place now from the top of Wolf Creek Pass to the City limits of South Fork. Alamosa Regional EOC has been notified. Shelter locations are the Del Norte High School for people, and the Sky High Complex in Monte Vista for RV and large animals.

From the Alamosa Valley Courier:

SOUTH FORK - Due to updated West Fork fire information notification of a mandatory evacuation has been issued for the following South Fork areas as of 6 a.m.: Masonic Park, Elk Creek, Woodchuck, Hudson's Sentinel Mountain, Rio Vista, Riverside Estates, Ponderosa, Dakota Park and South Fork Small Tracts. This includes all areas South of Hwy 149 and West of Hwy 160. Residents will need to be out of their homes by 10 a.m. Friday, June 21.

Buses are available for transportation to the shelter in Del Norte and are located at the South Fork Community Center starting at 6 a.m.

Those who are mobility impaired or have other medical needs that require assistance in evacuating call: 587-5310 or 587-5312.

Highway 149 between South Fork and Creede will be closed at 9 a.m., due to fire danger.

From the Postal Service: Due to emergency evacuations all South Fork 81154 mail will be held at Del Norte PO 590 Columbia St.

There will be a public meeting in Pagosa Springs tonight, Friday June 21st, 7:00 PM in the community center.