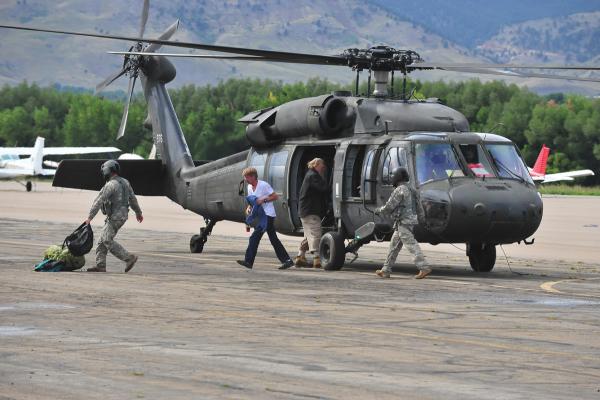 After rain pummeled flooded communities over the weekend, long awaited sunshine poked through the clouds Monday. Towns are just starting to dry out from days of heavy rain and flooding.

The destruction is severe from Colorado’s unprecedented flood event. The water destroyed countless roads and bridges, and damaged thousands of homes.

“The President has concurred with the Governor and declared the state of Colorado a major disaster and has turned a variety of programs to help with the immediate response, removal of debris,” said Fugate.

Aid includes financial assistance in four counties for people with losses not covered by insurance and extra manpower to help local agencies on search and rescue efforts.

Helicopter recovery cranked into full gear Monday afternoon. Both Boulder and Larimer counties were able to resume rescues of people stranded in their homes because of washed out roads.

Hundreds of residents have been reported missing, in many instances because they have no way of contacting friends and relatives. Downed cellphone towers and phone lines have made communication in some areas difficult.

“We may complete this evacuation component in the next day or two but there are a lot of areas that we’ll have to search thoroughly and continue to focus on those that are missing at this point and make sure everyone that’s accounted for and that may take weeks or even months I would anticipate,” said Nick Christensen with the Larimer County Sheriff’s office. “

Tim Tulk was stranded in his home in the Big Thompson Canyon, which was ravaged by flood water. For the last couple of days Tim has been communicating with family through text messages.

“There’s nothing normal right there right now,” said Tulk. “There’s houses that have been wiped out, and there’s just parts of the road that are totally missing.”

It may be months before he returns home because roads leading up to his property are completely destroyed. Tulk plans to stay with his sister-in-law Kim for the time being.

The Red Cross’s Larry Fortmuller says evacuees are divided into two groups. Those like Tulk who are staying with friends or families and those who need to stay on in the shelter.

“If they have no place to go, have no plans then this is a red cross shelter, we can check them in, give them a place to sleep, meals, nursing care, emotional support and we help them get back on their feet,” said Fortmuller.

Ultimately, Fortmuller says the goal is for evacuees to find at least temporary housing. As search and rescue efforts continue in the coming days, FEMA officials say they’ll work to find rental properties for evacuees.

The agency has had a lot of recent practice in this area. Less than one year ago it embarked on one of its largest housing operations ever with Hurricane Sandy.