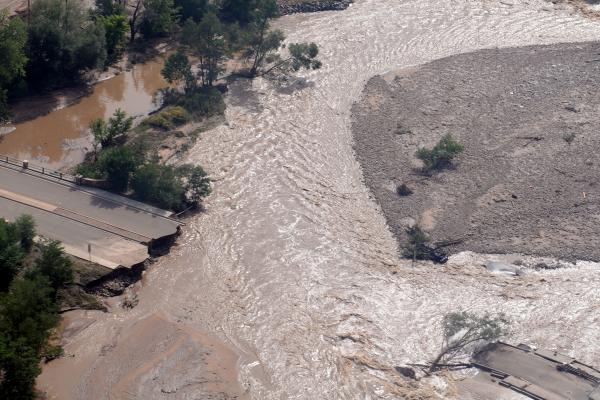 As the remaining flood survivors continue to be airlifted out of towns cut off by flooding, the focus is beginning to shift to recovery. Specifically on the very reason they have to be airlifted: roads.

Thanks to Colorado’s historic floods, the price tag for the road and bridge fixes could approach half a billion dollars in Northern Colorado transportation officials say.

Crews will be identifying which roads and bridges will need the most work all this week. So far, the federal government has pledged $5 million for the rebuilding efforts, with more on the way.

The hardest were Highways 34 and 36, the main arteries into the town of Estes Park, said Johnny Olson, a regional director for the Colorado Department of Transportation. Crews are attempting to fortify Highway 7, a narrow, winding mountain road that leads to Estes before the inevitable snows shut down Trail Ridge Road through Rocky Mountain National Park.

A CDOT building in Greeley has become the department’s command center for the flood. Crews are dispersed by truck or helicopter to survey the landscape, or to close off more roads as the flood waters continue their move along the South Platte River toward the Colorado-Nebraska Border.

“All of that water is basically converged together and is now moving across the Eastern Plains and creating new situations for us,” said Ashley Mohr, a CDOT spokeswoman.

In communities where the high water has already plowed its way through, the focus is on restoring access. On the short list are: Lyons, Estes Park, Poudre Park, and Millikin.

“Those are the towns that we’re looking at and saying ‘ok, what do we gotta do to get permanent entrance into it and exit out of it. So that’s where our number one priority is,” Olson said.

This flood doesn’t even begin to compare to other events his crews typically respond to, Olson said, whether it’s fire, mudslide or snowstorm.

“There’s so many communities. There’s so many people affected by this,” Olson said. “This is probably one of Colorado’s biggest disasters in terms of a mass area than I’ve ever seen and I’ve been in the business for 21 years. It’s devastating to a lot of people.”

Emotions across the Front Range are high, Olson said. The massive scope of this disaster has strained his department’s resources.

Hard figures on the amount of money it’ll take to fix the state’s destroyed roadways should be out by the week’s end.