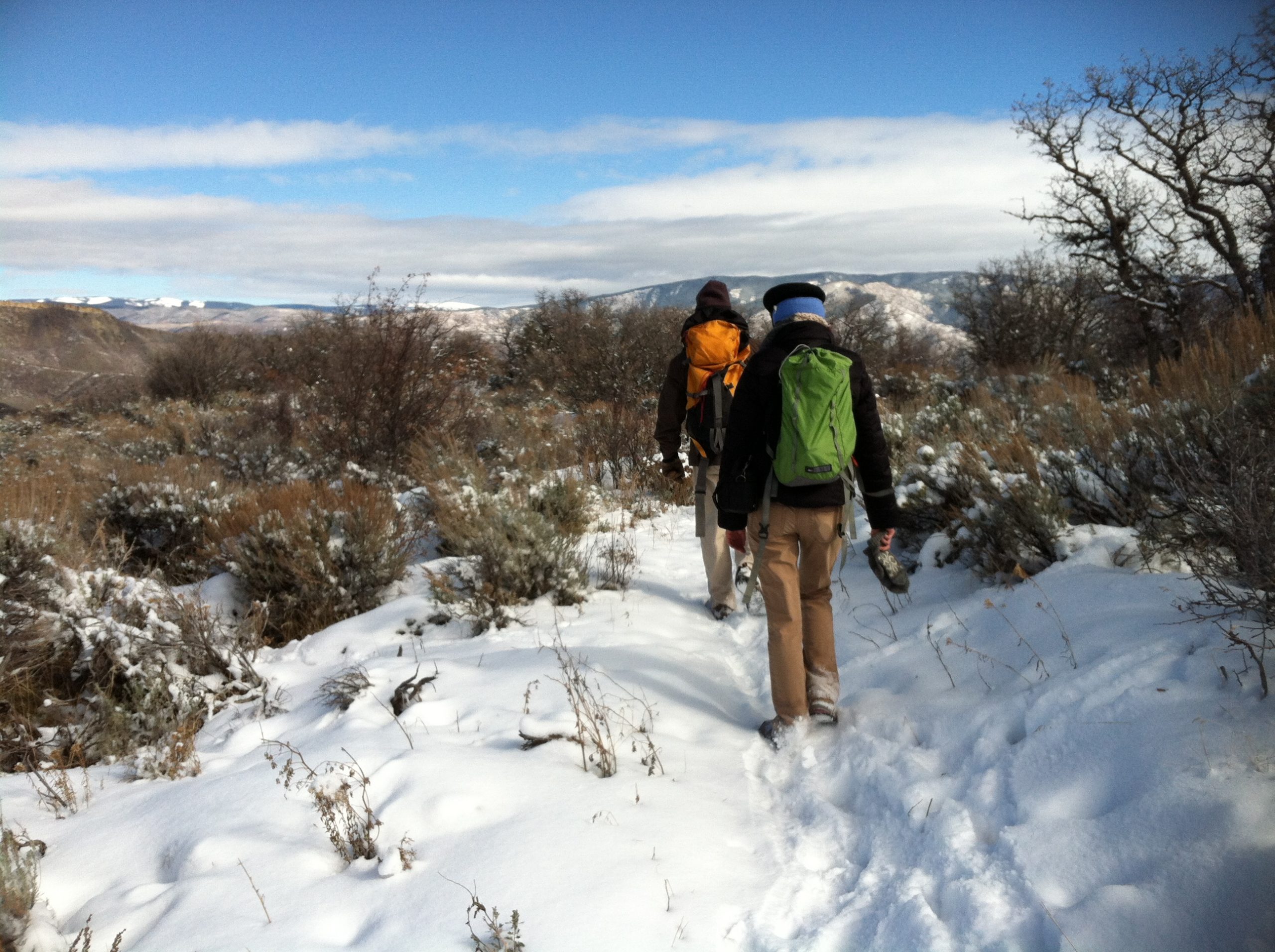 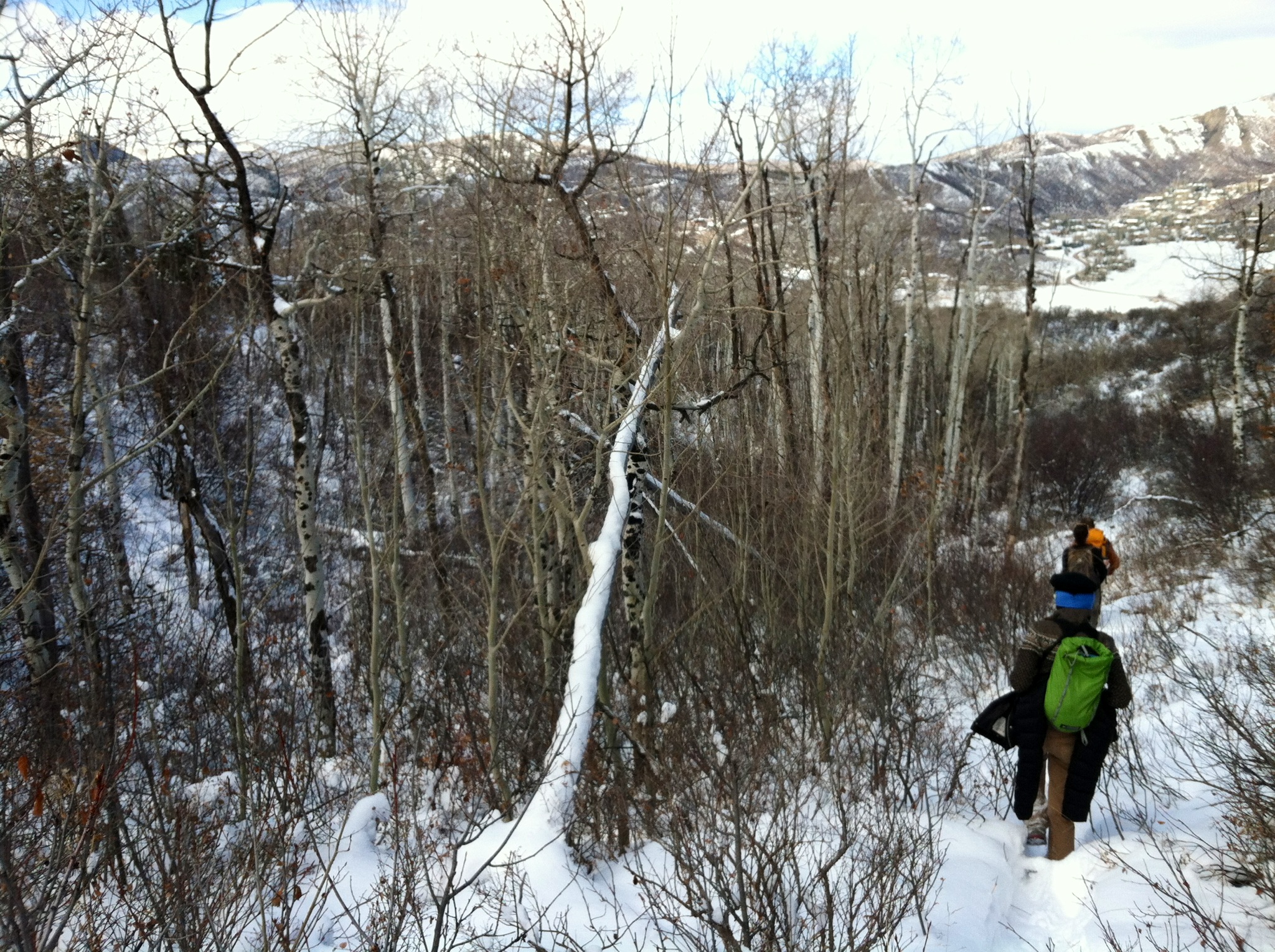 Marci Krivonen / Aspen Public Radio Scientists chose to erect a soil moisture monitoring tower in this aspen grove because it's in decline due to drought. 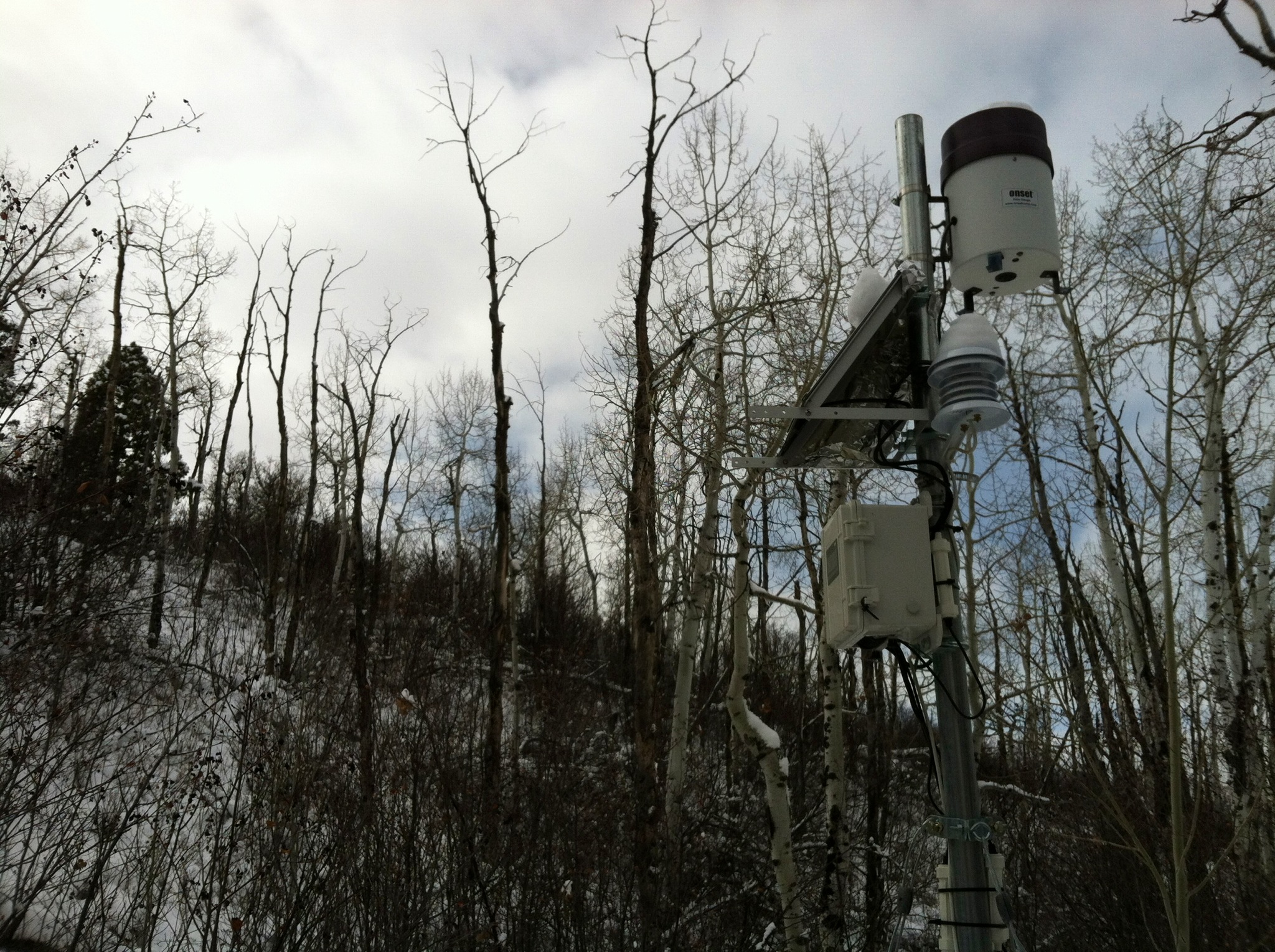 Marci Krivonen / Aspen Public Radio The rain gauge at the top of the tower is just above a solar panel that powers the tower. It sends real-time data to a computer several miles away.

In the future, forests near Aspen and across the state will likely look a bit different.  Already, mountain shrubs are replacing some Aspen stands and changing the complexion of the region.  Pitkin County is now tracking these shifts on open space properties.  Two Aspen-area non-profit organizations are helping. The new data is thanks to a pair of towers that’s tracking things like soil moisture and temperature. Aspen Public Radio's Marci Krivonen reports.

John Katzenberger of the Aspen Global Change Institute leads a small group of scientists up a snowy trail above Snowmass Village. The switch-backed route is part of a 2300 acre piece of public land, known as “open space.” About a mile away is a soil moisture-monitoring tower that’s hidden among aspen trees.

The tower is just off-trail, and hard to spot at first.

"It’s kind of tucked away, so it doesn’t take from the natural vista while people are hiking."

At the base of the tower, three sensors underground measure soil moisture at different depths. They’re connected to wires that snake up the tower. Katzenberger motions toward the tower.

"And, it comes up and it’s wrapped in this foil tape so that critters don’t nibble on the plastic and eat to the wire, and the tower itself is anchored down and it’s about ten feet tall."

The sensors plug into a data-logger that sends real-time measurements to Katzenberger’s desk several miles away, in a warm office. The equipment also measures temperature and relative humidity. A rain gauge at the tip-top also gives clues about moisture levels.

Soil moisture measurements are most important. They give a window into how much water the trees are getting. This stand was affected by a recent drought, and the trees are brown.

Katzenberger confirms that a certain number of them are dead.  "That’s why we think is that it’s a stand in transition. Which way it’ll go will depend on the climate and a number of other factors."

Over time, the measurements will reveal whether this aspen stand can survive. Or, the data could show it dying off with new kinds of vegetation replacing it.

Ultimately, the information will show the effects of climate change and help land managers adjust to future changes.

"It saves our resources in the future by doing the right prescriptions for what is going to be coming in the future," says Gary Tennenbaum, with Pitkin County.

Tennenbaum manages Sky Mountain Park, where the data collection site is located. He worked with Katzenberger and another non profit, the Aspen Center for Environmental Studies, to erect the tower.

The county purchases open space properties to protect land from development and for public recreation. Every purchase includes a prescription for the land like thinning vegetation if the trees are dense and old or planting new trees in drought-affected forests. Under climate change, these prescriptions could change.

"Climate change is going to change the overall look of our forests and what species are there, but (we're unsure) how drastically and where and when. So, we don’t want to be planting aspens in an area that aspens can’t handle. So, why don’t you prepare for the future, and prepare for the species that are going to come in," he says.

He’s counting on data from the tower to give a glimpse of how local forests will change in the coming years.

Back along the snowy trail, John Katzenberger of the Aspen Global Change Institute says he’d like to see soil moisture sensors installed throughout the valley to see how climate change is affecting forests at different elevations.

"There’s a few other places in the (Roaring Fork) Valley, like in a riparian habitat and then further down toward Glenwood where it’s dryer. You’re basically going from lower Montane  and scrub all the way up to subalpine and alpine all in our one valley, so it’s like a great living laboratory."

So far, this tower is gathering data along with another one on Smuggler Mountain Open Space in Aspen.