Skip to Content
Need help?
Donate
When the topic of hip-hop comes up, both as a genre of music and culture, rarely does the term “family-friendly” come to mind.
The disconnect makes sense. Infused with adult themes, profanity and racial and misogynistic slurs, the art form is more likely to make most parents cover their kids’ ears than encourage participation from their offspring.
Even so-called “clean” versions of songs that are played consistently over the radio waves contain subject matter that is inappropriate for their target demographic, which for many radio stations can be listeners as young as 12. (The Cleveland-based hip-hop station, Hot 96.3, states on its website that the station targets “listeners 12 - 44.”)
Take a look at the lyrics of the “clean version” of the popular track “Show Me” by Kid Ink, for example: “Baby let me pull your panties to the side/I’mma make you feel alright.”(Full song lyrics can be found here.) The sentiments expressed here are obviously far too sexual for most 12-year-olds to relate to.
But not unlike rock, punk, and other musical genres, hip-hop continues to appeal to adolescents through pushing boundaries and encouraging self-expression.
Those that live and love hip-hop culture want to see it grow and flourish, and the best way for this to happen is through today's young people.
But how do you pass on the art form in a way that feels authentic while at the same time causing no harm to young hearts and minds?
From educational facilities and youth choirs to b-boy schools and family-oriented event producers, many Colorado-based organizations are leveraging their love of hip-hop culture to teach, influence and uplift children.
Breaking -- also known as b-boying or breakdancing on a mainstream level -- is one of the easiest ways to include and educate young people, as it promotes fun through encouraging discipline, confidence and self-expression.
Groups like the Denver chapter of Hip-Hop Congress, an organization comprised of Metro University students and alumni, put together events throughout the year to share the positivity of hip-hop in all its forms with people of all ages and backgrounds.
Hip-Hop Congress’ offerings include “Spirit of Hip-Hop” -- a yearly park jam, and the female focused breaking event “Queenz of Hip-Hop.” Both happenings aim to show that hip-hop can be fun and educational -- not to mention a great workout.
Elsewhere on the Colorado scene, several dance studios like B-boy Factory and Dance2Live focus on teaching both youth and adults about the fundamentals of hip-hop dance.
Beyond their class schedules and open studios, these organizations also throw yearly events that are open to anyone. The skills displayed at these happenings are impressive.
Dance2Live hosts a yearly event, King of Hearts, which takes place over Valentine's Day weekend and attracts b-boys and b-girls from all over the world representing all skill levels.
Chase Evered, one of the organizers of King of Hearts, knows the inclusion of youth is vital to the future of hip-hop and in turns thinks hip-hop is a great way to help kids have bright futures.
“We need the next generation to be healthy in mind, body and spirit,” Evered says. “We want the next generation of people to be confident, patient, hard working, disciplined, self-reliant and intelligent. These are important values in hip-hop that are universal in nature. Everyone alive can relate to them.”
Some of the classes that Youth on Record offers include music fundamentals, music production and lyricism.
Bianca Mikahn, a Colorado emcee who also teaches at Youth On Record and Check Yo Head, a hip-hop mental wellness program, says educating kids in the distinct artistic practices of hip-hop can reach them on a very individual level.
“Workshops about break dancing speak about physical health and centering yourself,” Mikahn says. “Teaching lyricism includes language arts emphasis and mental math skills. Breaking down the science of a sound wave can yield numerous metaphors and exercises ranging from cause and effect to knowledge of self. When the youth create, an amazing microscope on their own process is produced and we are able to grow in real-time in ways I’ve not witnessed with any other medium.”
Other local musicians include educating youth as part of their personal style and mission. 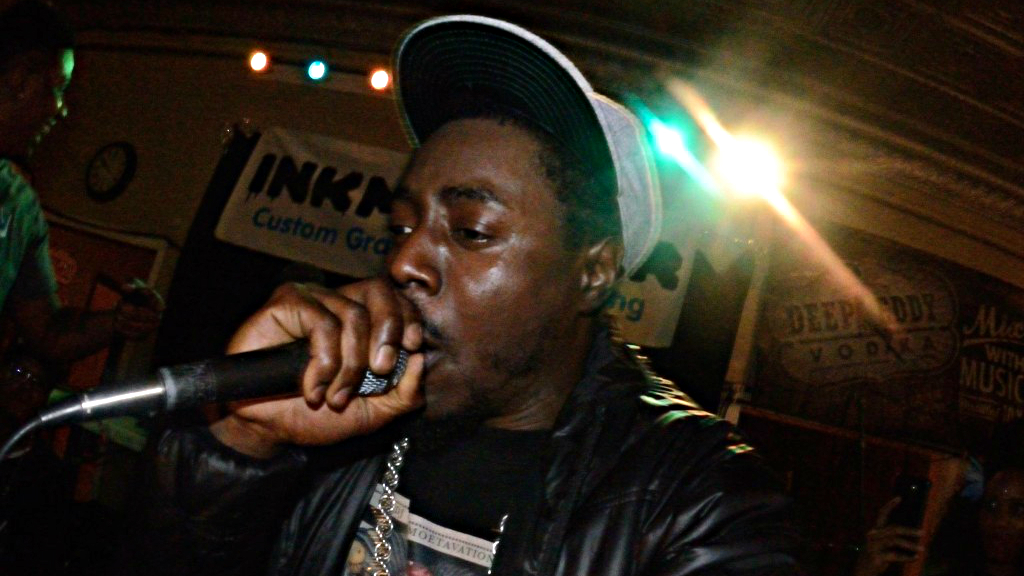 (Photo: Tim McClanahan)Emcee, deejay and educator DJ Cavem uses his skills as both a performer and organic gardener to teach kids and adults alike about the benefits of healthy eating and conservation. His efforts have even caught Oprah’s attention, prompting a profile of the emcee on the star’s website.
One of the more unusual, yet engaging ways that we see hip-hop being passed on to the kids is through the creation and performance of songs.
303 Choir is a sub-group of the Colorado Children's Chorale. Led by assistant conductor, Travis Branam, the ensemble comprises Denver area middle- and high school students. The young singers work with local artists of all genres and perform their songs in an engaging way. The singers often perform the hook or refrain of a song a cappella rather than using the recorded version as a crutch.
Choral music may not seem like an obvious match for hip-hop. But when the energy of the choir mixes with the passion of the emcees, the outcome is a moving musical display.
Of his purposeful inclusion of the local hip-hop community in his curriculum Branam says: “It's important to me to include hip-hop in 303 not only because there is so much of it being made that youth and families need to know about, but also because many of the artists who make it are some of the most passionate, caring, generous and community-focused people I've met in my musical career.”
This Saturday, January 25, many of Colorado’s family- and youth-oriented hip-hop artists and their collaborators are coming together to perform in Denver.
The program includes appearances by the 303 Choir, The ReMINDers, DJ Cavem, Molina Speaks, 2MX2, Bianca Mikahn, DJ RSKWARED, Infinite Mindz and DJ Lazy Eyez. 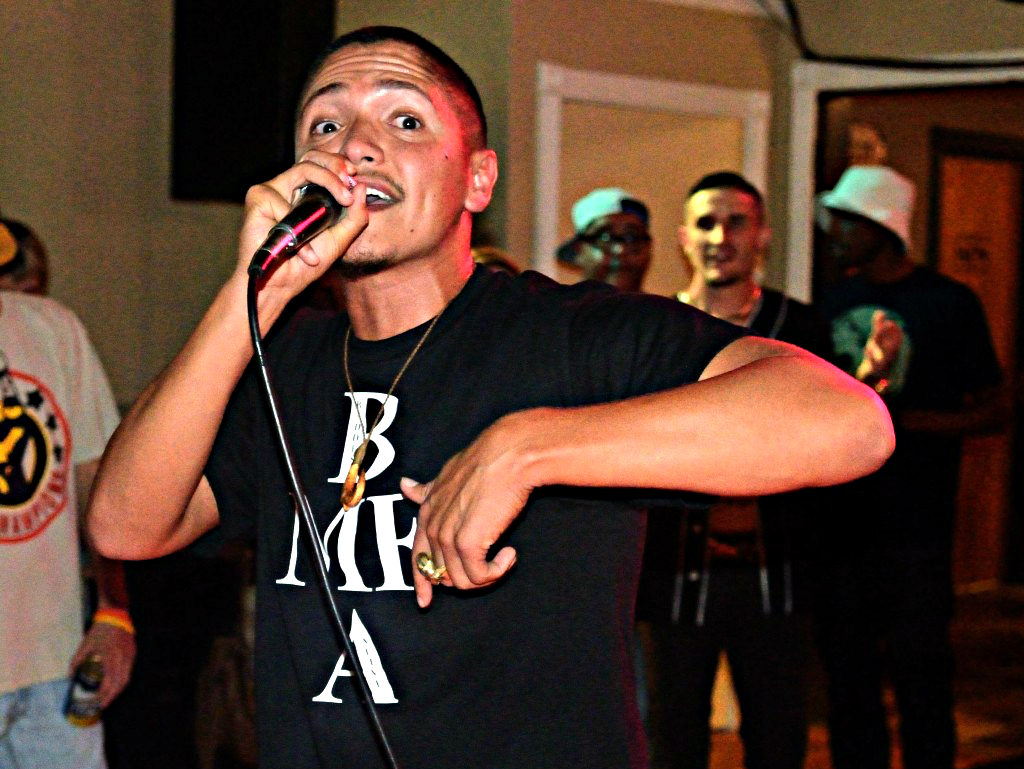 (Photo: Tim McClanahan)These organizations, groups and musicians realize that loving and living hip-hop comes with the responsibility of sharing their passion with young people.
“Hip-hop was created by young people and will always be a youth movement,” Molina Speaks (aka Adrian Molina) a Denver-based emcee, educator and activist, says.  “The older heads who really know what it's about need to pass on the lessons we have learned, and remind young people that it's about the power of their voice and creativity, that this is fun and it's also a tool to make the world a better place.”
In Colorado, not only is the hip-hop scene strong, but the passion for reaching kids is equally important to community members, as proven through the many people who strive to put educating through hip-hop at the heart of their craft.

Nicole Cormier has been a journalist in Colorado for close to a decade and has written for numerous publications including Denver Westword, Colorado Music Buzz, AboveGround, Womazing.com, Cronic Magazine and her own site, HipHopRollCall.com.