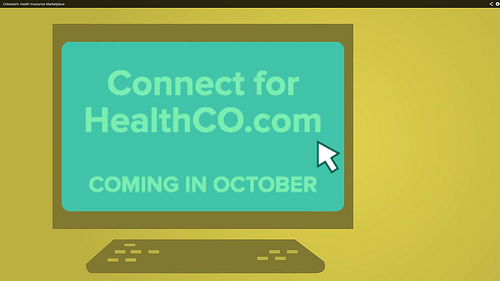 That’s the new Colorado-based marketplace set up under the Affordable Care Act. The cost to establish Connect for Health was paid almost entirely by federal grants. Those grants run out next year.

To keep Connect for Health running in the future, its leaders have started charging a fee on every insurance policy it sells. It also plans to start charging a new fee on health insurance policies it doesn't sell, starting next year.

How high should the fees be?

Connect for Health isn't allowed to take money from Colorado taxes, so its plan is to fund itself using several different sources. Fees are the biggest source.

One of those fees is already set: Everyone who buys coverage through Connect for Health pays 1.4 percent of their monthly premium to fund it. That adds up to about $57 a year per person.

How does that compare?

“[Colorado’s] fee is on the lower end certainly, remembering that on the federal level it's a 3.5 percent fee, here it's 1.4,” National Conference of State Legislatures spokesperson Richard Cauchi says. “So I think in terms of a consumer perspective there's less money on the table, so to speak.”

But Colorado plans to start charging a second fee next year. It wouldn't hit just people who buy through Connect for Health but anyone who buys a health insurance policy anywhere in the state.

Connect for Health's CEO Patty Fontneau says state law gives the marketplace the right to charge each insurance buyer in the state up to $1.80 a month. But Fontneau says now it looks like the exchange won't have to charge that much.

“We anticipate and have modeled that we would not need the full $1.80, and we anticipate being able to reduce that from what was passed by the legislature,” Fontneau says.

That's in part because Connect for Health has been pretty successful at signing people up.

If a lot of people buy policies through the Connect for Health, the exchange can charge everyone a lower fee and still raise the same amount of money.

Connect for Health's goal is to sign up so many people by 2017 that the fee on people buying health insurance outside of its marketplace will disappear.

Not everybody is convinced.

“The $26 million operating budget is a complete black box to me,” Ellen Daehnick says.

Daehnick sits on Connect for Health's Board of Directors, and can vote on its budget, and how high its fees can be.

“I've had numerous conversations with the executive director, and the CFO, asking, what comprises that cost? How much of it is fixed? How much of it is variable? What's technology? What's people?" Daehnick says. "I've been asking that question for six months, and we still haven't been able to get a specific answer.”

Daehnick and other board members recently shot down a Connect for Health staff recommendation to boost its original fee on the insurance policies it sells.

In the next few weeks, the board will evaluate how much that second fee should be. Daehnick says the organization is going to have to make a pretty strong case to convince her it should be any higher than $1.00 a month.

“It's such an overused expression, but when you're spending a ton of tax dollars, you need to demonstrate the value that you're providing, and articulate the specifics of how you're going to get there,” Daehnick says. “That's something that Connect has just had a really hard time doing, at least in the time I've been on the board.”

Connect for Health Colorado’s Board of Directors has not yet scheduled a date to vote on the new fee but it's expected sometime in June.