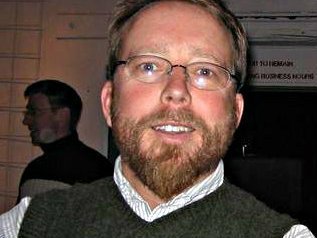 Professional background:
Eric was born in Ft. Collins and grew up in Colorado Springs. His family has been farming and ranching in eastern El Paso County for more than 100 years. Eric got his start in radio at KDUR, the student-community station at his alma mater, Ft. Lewis College in Durango. From there he moved to KOTO in Telluride. He then took a job at the regional High Plains News Service in Billings, Montana. A series of fellowships supported Eric's work after that and allowed him to follow his interest in health topics. The Kaiser Family Foundation helped him report on mental health in the United States and infectious disease in southern and east Africa. The Knight Foundation allowed him to spend four months studying epidemiology at the Centers for Disease Control in Atlanta. The Crime, Communities and Culture Felloship from the Open Society Institute sent Eric to report on prisons in the western U.S. Eric spent most of 2003 living in and reporting from Cape Town, South Africa, as a freelancer before becoming the news director at KRCC in Colorado Springs, a position he held for three years before moving to Colorado Public Radio.


Q & AWhy I became a journalist:
I've always loved to write and tell stories and been curious about the world around me. Journalism seemed like a good fit, and once I got started I fell in love and never looked back.

Why I got into radio:
When I was nine years old my family moved to California for a year. My parents bought a portable cassette recorder so we could send tapes back to our grandparents. I got hooked on playing with sound immediately and gave that little recorder a serious workout over the next several years. I've always been fascinated by the voices and music coming magically out of the air and through a speaker. When I got to college, there was no question that the campus radio station was the coolest place to be, and I also discovered that some of the best reporting out there was on National Public Radio. My first job out of college was reporting for KOTO in Telluride, and all the love I've put into the medium since then has been returned tenfold.
How I ended up at CPR:
As my career progressed, I became increasingly interested in reporting on health. Full-time health reporting jobs, let alone at public radio stations, let alone in my beloved home state, are rare gems. When CPR offered such a job in 2007 I did everything in my power to land it.