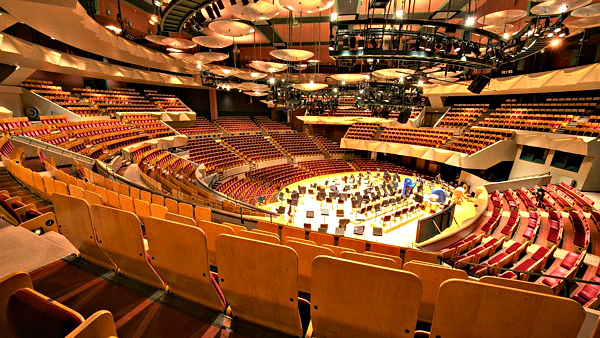 (Photo: Courtesy of DCPA by Brian Kitts)The Colorado Symphony will not vacate Boettcher Concert Hall during the 2014-2015 season after all, Symphony public relations manager Laura Bond told CPR on Thursday.

"We know that we're here at least through the end of the 2014-2015 season and then it's up in the air," Bond said in a phone interview. "We're viewing this as a temporary fix to get us through the next season."

Bond explained the Symphony is currently in discussions with its landlord, Denver Arts & Venues, about the terms of its relationship with the city going forwards.

Last month, the region's flagship classical music ensemble was actively pursuing a new temporary home to make way for renovations to the Hall where the Symphony has been for nearly four decades.  The orchestra had considered signing a letter of intent with the Central Presbyterian Church in downtown Denver. Colorado Symphony CEO Jerry Kern had gone as far as to say that a potential partnership between the orchestra and place of worship might last for a number of years.

“The commitment to Central Presbyterian cannot be a one-year commitment," Kern told CPR on May 12. "If we are to spend the money with them, we would have to amortize that over at least five years. So a move to the church is not one year out and then move back to Boettcher.”

Bond said the orchestra is telling patrons who call with concerns about their subscriptions for next season that the orchestra is staying put. And she noted that the Symphony still plans to perform a few concerts at Central Presbyterian in the future.