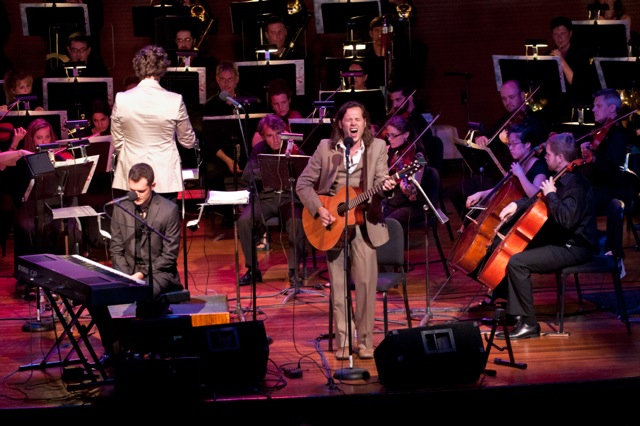 Trained as a conductor at Philadelphia’s Curtis Institute and at the Aspen American Academy of Conducting, Hackman has since established himself as a purveyor of what he calls “music mash-ups.”

These are seamless mixes of classical and pop music that travel far beyond the much-traveled road of cross-over.

Rather than the typical placement of popular selections on the same bill with light classics, Hackman intertwines in a single, evening-length work sophisticated rock or pop songs with orchestral masterworks.

Last summer, Hackman blended the music of the German Romantic composer Johannes Brahms with that of the rock group Radiohead.

The series starts on Tuesday with the premiere of Hackman’s “Beethoven v. Coldplay,” commissioned by the CMF. The work features the Festival’s orchestra and three guest vocalists.

CPR: How did you come up with the concept of blending rock with the classics?

Steve Hackman: There was not one great epiphany. This is more a culmination of my musical experiences. It’s always been my endeavor to combine pop and classical. The first one of these I did was “Brahms v. Radiohead” last year in Indianapolis. They’d just performed Brahms’ “First Symphony,” and I’d always loved Radiohead. They both had a lot in common to my ears. There’s a weight to their music, plus a lot of things like harmonic relationships, a lot of sections in a minor mode, similar key relationships -- things like that. Plus, the Brahms was the first piece I’d ever conducted in concert. With this next one -- Beethoven’s “Erioca” Symphony and Coldplay -- I felt that same general feeling about their music. For one thing, both appeal to everyone. Putting them together leaned on the popularity of both.

CPR: What was the process of creating “Beethoven v. Coldplay”?

Steve Hackman: With the last one, it was like “Brahms-land” evolves into “Radiohead-land.” In this piece, it’s more “Beethoven-land” -- there’s more of the “Eroica” here. I did a lot of extending ideas and even a little re-composing with the Beethoven. Then, I had to figure out which Coldplay songs I would use. I chose 12 of them. I use three in the first movement, but none of them are in triple time, whereas the Beethoven opening movement is in triple time. So I had to shift some of the songs to triple. I chose songs that I loved, that had the most emotional connection. Actually, the process wasn’t that difficult. Creating the piece was, of course, a challenge. That’s why I begin and end it with a line from Coldplay’s “The Scientist” -- “Nobody said it was easy.” It also seemed a natural thing to use that song in Beethoven’s “Funeral March.” The Coldplay song is a slow dirge about a broken relationship. And in the “Eroica” finale, I use the Coldplay song “Viva la Vida,” which kind of fits with the triumphant feeling of the Beethoven.

CPR: How do you expect fans of Coldplay to react?

Steve Hackman: These days, this sort of mixing is getting pretty big. The Radiohead fans were fine with the last one. I honestly think that followers of the two bands will want to hear the Brahms and Beethoven. I’m trying to attract a younger audience for these great works. I have given this a lot of thought, and I’ve wondered, is there a new sophistication? I mean, who are these younger audiences? I believe they are fans of pop music that has substance. Really, it’s a huge audience, but their access to a symphony orchestra just isn’t there. I think there are a lot of factors why they don’t go to symphony concerts. Mostly it’s the aura of a classical hall. They love the sound of a big orchestra. You just have to get them there.

CPR: And what of the reaction from classical fans and orchestra musicians?

Steve Hackman: These shows are not meant to impress anyone. I’m not consciously thinking about showing my respect for Beethoven or Coldplay. A lot of this has to do with keeping the orchestra engaged, to get the musicians to play to their potential. How many times have they played the Brahms or the Beethoven? And how many times have classical fans heard those works? For me personally, this became a process of getting inside the music. With the “Eroica,” I sort of lifted the hood, looked inside and began breaking things down. Nothing I’ve ever done has gotten me closer to his music. I’ve been re-living his compositional process.

CPR: You’ve conducted “Brahms v. Radiohead” three times now, including in Boulder, and at each performance, you tell me, the cheers were long and enthusiastic. But don’t you feel that this sort of hybrid will still find resistance from traditionalists?

Steve Hackman: I know it’s a risk. But this is just me. It’s how I’ve led my life. I’ve always loved both types of music. Honestly, I don’t see that line between the two. It’s not a case of degrading one or the other. I see the universality of both and worked to bring them together. With the success I’ve had, I think these “mash-ups” are starting to get on other orchestras’ radars. As for the bands themselves, I haven’t heard from them -- they have other matters to attend to. Of course, I have to arrange the licensing fees with the publishers. But I’m so excited about where this is taking me. There are so many pop artists I’d love to explore. Kanye West, for instance. Would a hip-hop work be next? Maybe.

In July, Steve Hackman will conduct the Colorado Music Festival Orchestra in three “Music Mash-ups” in Chautauqua Auditorium, 900 Baseline Rd., in Boulder. All begin at 7:30 p.m. A free nature walk from 5 to 6 p.m. will precede each of the first two events.