"Construction and housing are rebounding, our auto industry is booming [and] manufacturing is adding jobs for the first time since the 90s," he said. "The unemployment rate has fallen to its lowest point since September of 2008, the fastest one-year drop in nearly 30 years."

He touted his administration's policies during the economic recovery, claiming that "We have come further and recovered faster than almost any nation on Earth."

"Our businesses have added nearly 10 million new jobs over the past 52 months." —President Obama http://t.co/YxBc64sIf4

The president also slammed the Republicans in Congress for stopping his legislative priorities.

"I’m not going to stand by and let partisan gridlock or political games threaten the hard work of millions of Americans," he said. "Don't be mad at me for doing something." 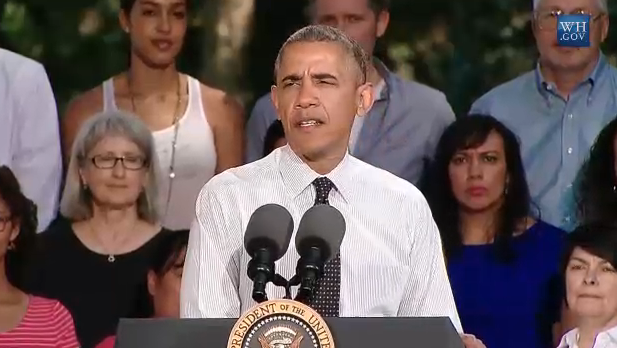 The Colorado Republican Party responded by saying most Coloradans don’t feel they’re doing better after the president’s six years in office, and families are still struggling to get by.

Obama arrived in the state Tuesday evening, and met with Coloradoans at the Wazee Supper Club who had written to him about the minimum wage.

Later Wednesday, Obama spoke at a Democratic fundraiser at the Westin Denver Downtown hotel.  Earlier Wedneday, Sen. Mark Udall canceled his appearance at the fundraiser "due to last-minute votes and legislative activity." Udall is seeking re-election but is considered one of the Senate's vulnerable Democrats. Obama's unpopularity makes him a political liability.

The president left Denver in the afternoon for events in Texas.