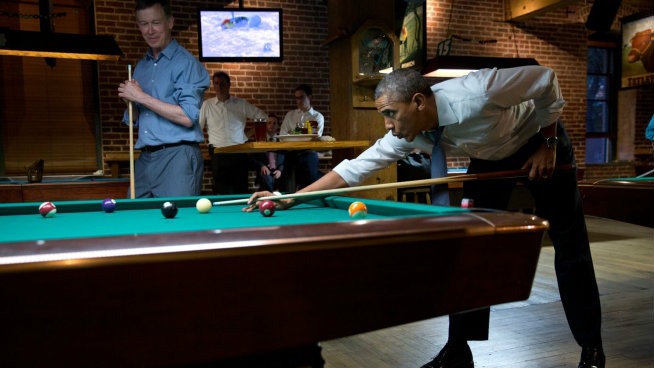 President Barack Obama's speech Wednesday morning  in Denver was notable for who wasn’t on stage with the president -- the top Democrats in the state.

In his address, Obama urged Congress not to work against him. But given his sagging poll numbers, Republicans have little political incentive to work with him.  And even some Democrats are steering clear.

U.S. Sen. Mark Udall, who is locked in a bitter re-election battle with Republican U.S. Rep. Cory Gardner, did not join Obama on stage or at a later fundraiser.  Udall’s spokesman Chris Harris says the senator was busy back in Washington confirming the new secretary of Housing and Urban Development.

Harris says Udall is also working on a newly introduced bill to overturn the U.S. Supreme Court’s decision last week in the Hobby Lobby birth control case.  The decision gave some businesses the right to not cover certain types of contraception.  Harris says there’s a lot happening in the Senate right now.

"The decision was made that the Senate comes first and unfortunately we had to cancel the trip," Harris says.

Republicans like State GOP Chairman Ryan Call would love nothing more than to see Udall up on a stage with Obama -- further linking the senator with the president’s low approval rating.

"You’ve already got a plane booked? You can’t change it? I’m happy to offer to pay Mark Udall’s ... change fee if he needs to book a later flight," Call says.

(Udall's campaign notes that the confirmation vote was shortly before the president's speech and fundraiser, so there was no time to fly back to Denver.)

Midterms are often referendums on the president’s party.  And Floyd Ciruli, a Denver-based pollster and political analyst who’s watching the Udall-Gardner race closely, says Udall’s campaign has worked to highlight his independence from the president.

"Nothing is worse than probably a picture together when you’re about 14 weeks out before early voting in October, because it sort of undermines the credibility of that argument," Ciruli says.

But that didn’t stop Democratic Gov. John Hickenlooper.  Though he skipped the president’s speech, he shared a beer and a round of pool with Obama in downtown Denver on Tuesday night.  Ciruli says that distanced himself a bit from the president’s rhetoric -- without totally snubbing him.

"But I think the governor probably handled that about as well as you can," Ciruli says.

Bob Beauprez, Hickenlooper’s opponent, responded to Obama’s visit with publicity calling the governor an "Obama fan boy" -- and linking him to the president’s “extreme agenda.”