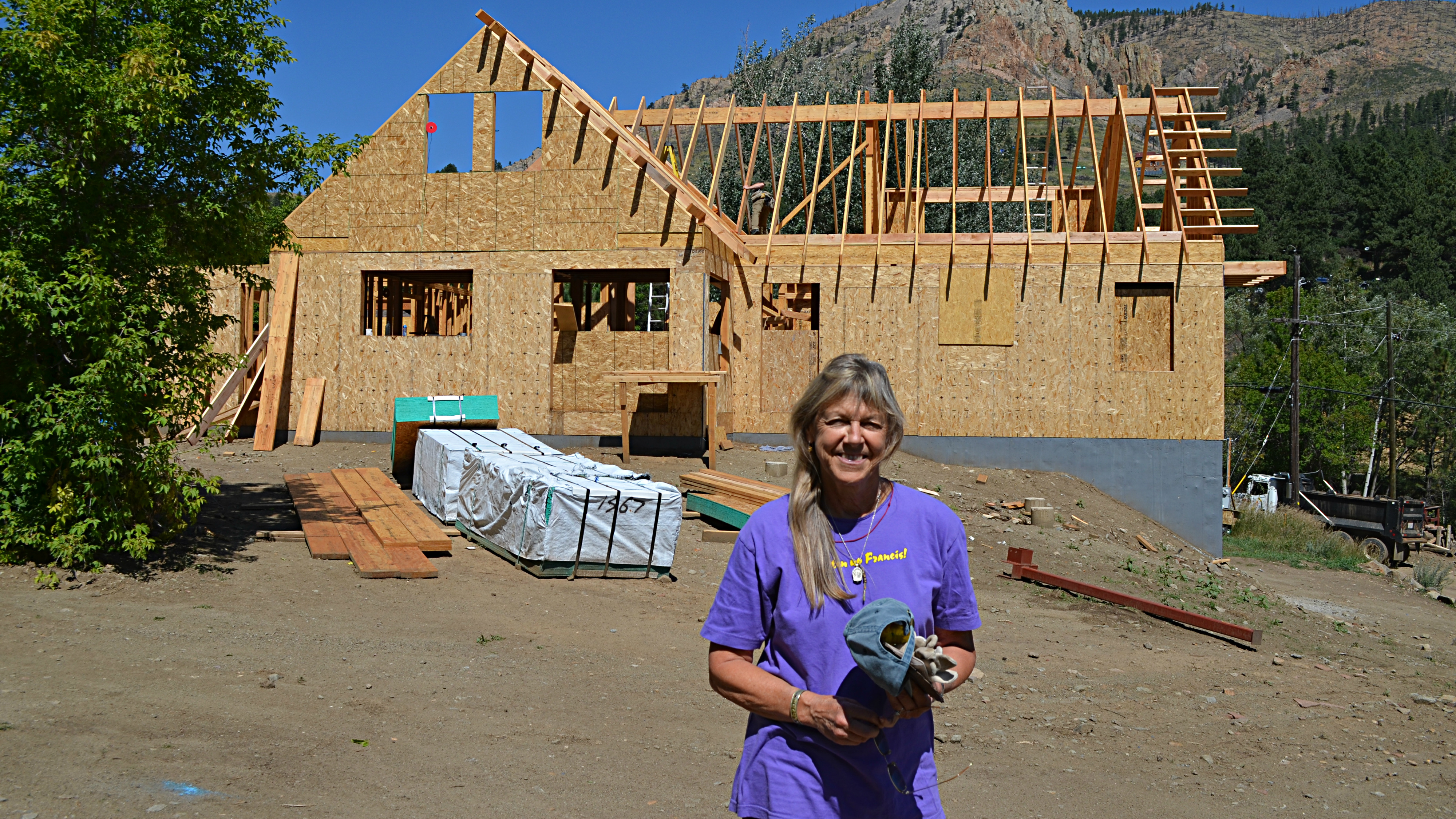 (Photo: CPR/Pat Mack)Recovery remains in full swing in the small Boulder County mountain town of Jamestown a year after flash flooding killed one resident and destroyed roads and buildings.

Tim and Wendy Stokes' home along the Little James Creek was destroyed by the flooding. Wendy Stokes says a recent heavy downpour brought back the nightmare.

"It was a bit retraumatizing because it was a thick dense rain," she says. "You can’t help but remember."

The flooding knocked out power and water supplies, washed away roads and damaged 19,000 homes and businesses. Ten people were killed.

The devastation was so severe in Jamestown that city leaders, like volunteer coordinator Nina Andaloro, feared their town of 275 would not recover.

"Getting the community home -- that was our big focus for many months," she says.

Crews fairly quickly restored power and made temporary repairs to roads. Before spring runoff, debris and sediment were removed from the creek. Creek channels and banks were repaired,  reducing the potential for more flooding.

Click the photo to see the recovery's progress. (See more then and now photos here.)

But community leaders didn’t breathe easier until last month when water service was restored to most of the town. Now almost 90 percent of the residents are back.

The Stokes aren’t among them, at least not yet. They’re still staying with a friend in Boulder. They broke ground on their home about a month ago.

The Stokes are getting some federal assistance because they are moving to higher ground. But that money won’t cover all their costs, so the Stokes are grateful for volunteer help they've received from Mennonite Disaster Service.

"It was joyous," Wendy Stokes says. "We had such a lovely time with that crew of people. They sang their blessings. They wrote their blessing all over the sheathing. They want to provide hope, and they did." 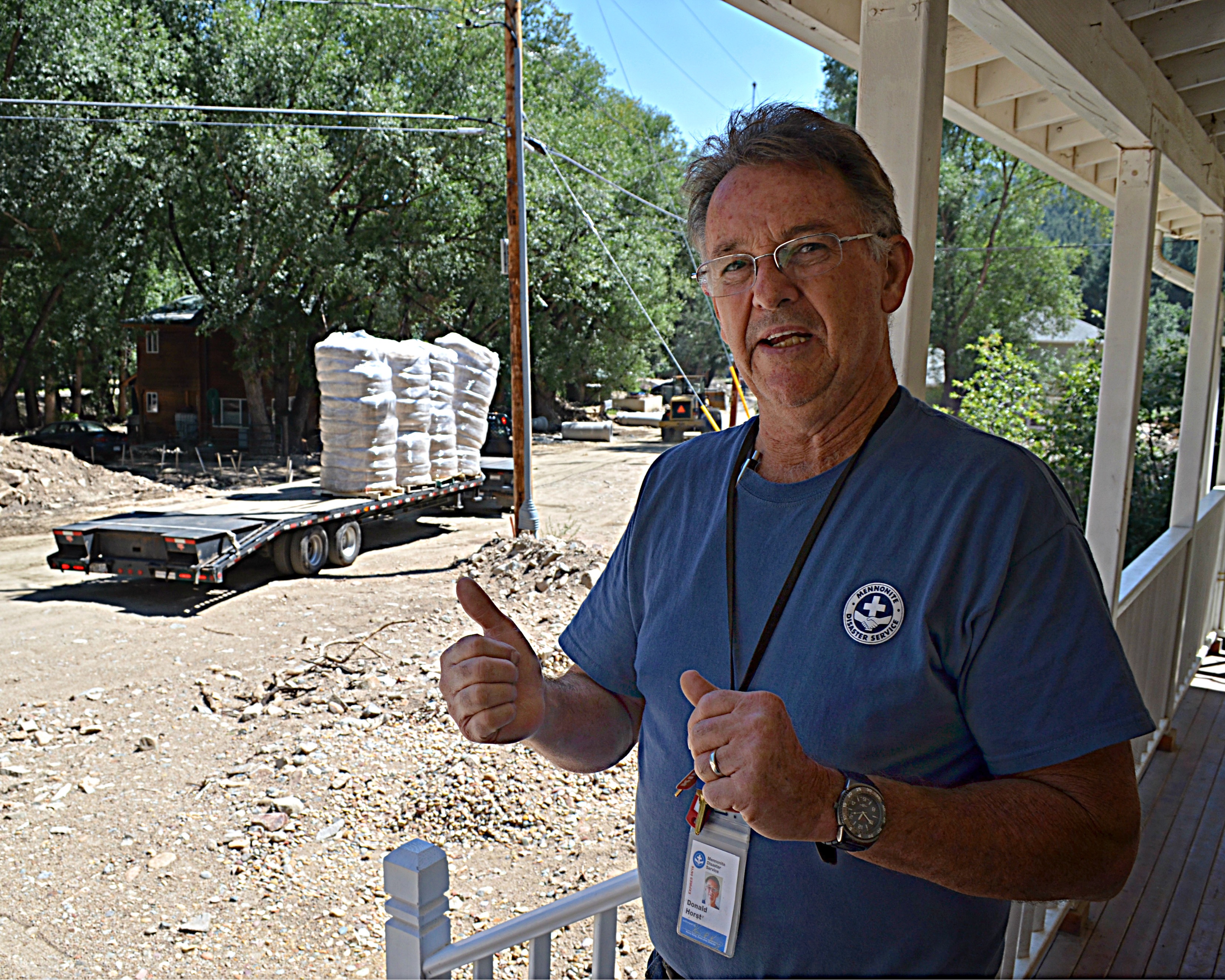 (Photo: CPR/Pat Mack)Don Horst from Kansas leads the team of 10 Mennonite volunteers. His first volunteer experience was coming to Colorado in the aftermath of the Big Thompson Canyon flood in 1976.

He points to song lyrics on a sign hanging on a nearby wall when Horst is asked about the Mennonites' motivation to help strangers.

"I keep looking at our song here we sing every morning. It’s all about sharing our love and care for the things God has done for us and we try to give back," Horst says. "That’s what keeps us coming back."

The Mennonites come from congregations around the country. Most will spend a week or two volunteering, and most have construction experience. Andaloro, Jamestown’s volunteer coordinator, says getting the Mennonite Disaster Service to commit to coming to town was a big victory. The town needs volunteers with construction skills.

About half a dozen houses were torn down and so far two are being rebuilt. The Mennonites are committed to stay through all of the home rebuilding.

Click the photo to see the recovery's progress. (See more then and now photos here.)

Some other major projects remain. The community still has to rebuild the town square and the road that connects lower and upper Jamestown.

Mayor Tara Schoedinger says almost all of the residents who were displaced a year ago are expected to be back in Jamestown by the end of the month.

She becomes emotional explaining why she always believed they would return.

"This is when I get choked up … because we’re a really tight knit community," she says. "We’re a really strong community. We had disasters here. We’ve been through the fires before. We’ve had floods back in ‘69 and smaller floods since then. And this is home and no one was going to let that be taken away."