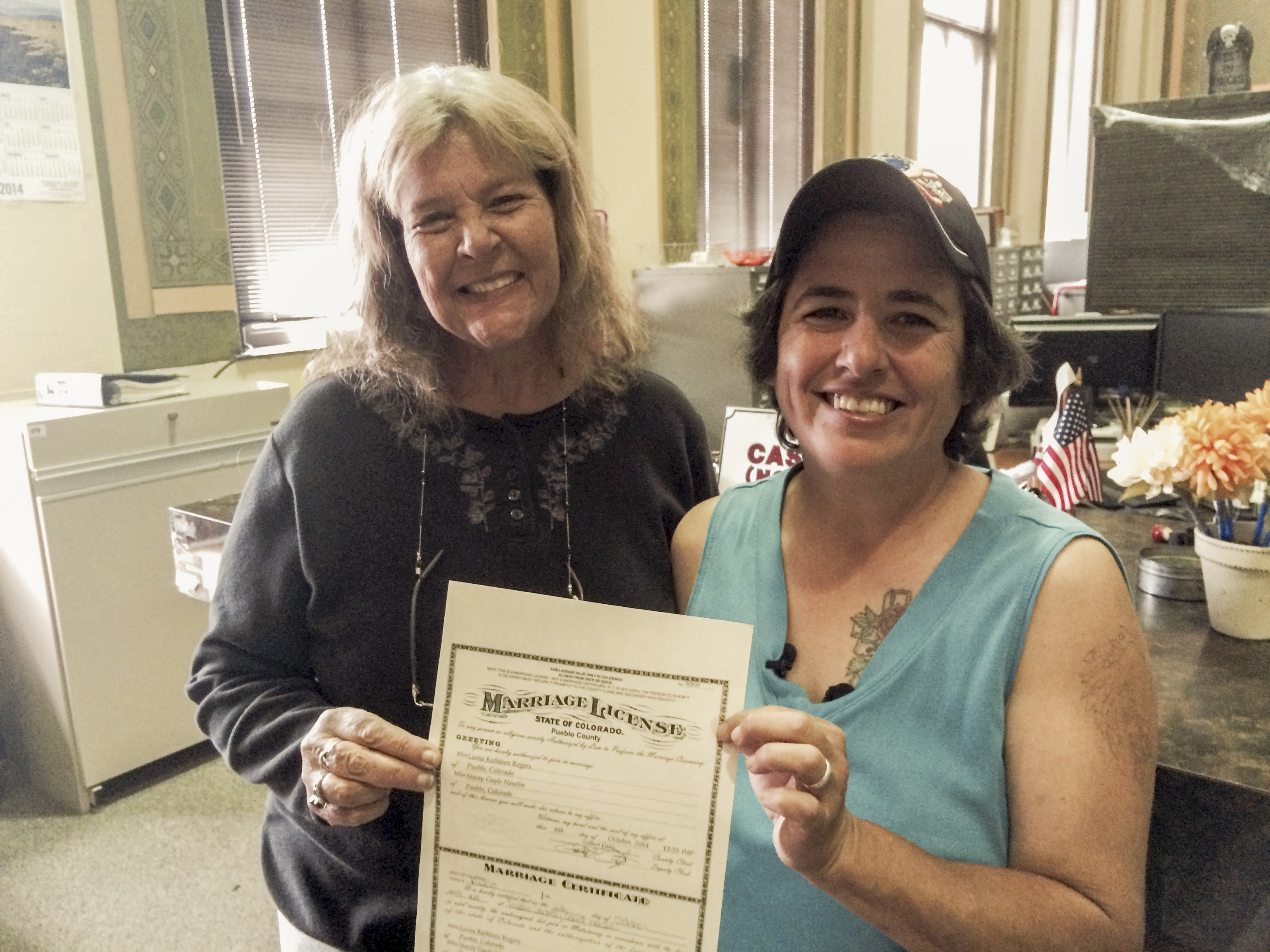 After years of battles in county clerks' offices, the ballot box, and ultimately, the court room, there's a final answer on gay marriage in Colorado.

The U.S. Supreme Court on Monday denied the appeal of five states seeking to ban same-sex marriage. One of the dominoes that will soon fall is Colorado's gay marriage ban.

For some same-sex couples in the state, it's been an tumultuous ride.

“I am shaking with emotion,” says Kate Burns, who's part of a federal lawsuit against Colorado's gay marriage ban.

Standing with other plaintiffs on the steps of the 10th Circuit Court of Appeals in downtown Denver on Monday, Mark Thrun said the formal recognition of his relationship is "huge."

“It’s so meaningful for families like ours. We’ve always known that our relationship is equal," Thrun says. "We love each other no differently than two straight people would love each other. We love our kids no differently. So to have sort of formal acknowledgement that our relationship is the same, by the highest court in the land, even if it’s a non-decision, is just thrilling."

The U.S. Supreme Court Monday rejected appeals from Indiana, Oklahoma, Utah, Virginia and Wisconsin, effectively making gay marriage legal in 11 states where it had been banned. The Utah case, argued in the 10th Circuit, applies to Colorado.

Colorado's Attorney General John Suthers had defended the state's gay marriage ban, citing the 10th Circuit's stay. But Monday, Suthers said the U.S. Supreme Court's action cemented the 10th Circuit's ruling. It will go into effect in a "matter of days," he says.
"Once the formalities are resolved clerks across the state must begin issuing marriage licenses to all same-sex couples," Suthers said in a statement.
He also asked county clerks to wait until then before issuing licenses to gay couples. Gilbert "Bo" Ortiz, the clerk and recorder in Pueblo County, said Monday he will issue licenses to gay couples immediately. Larimer County Clerk and Recorder Angela Myers began issuing licenses as well Monday afternoon.
Suthers was criticized for defending Colorado's gay marriage ban but said repeatedly it was his duty to do so until it was judicially struck down.
"The rule of law is always worth it, in my opinion," Suthers says. "Not defending laws of this nature is a very slippery slope."
Suthers said the licenses issued in Pueblo, Denver and Boulder counties are likely not valid. He encouraged couples who were married there earlier this year to wait until the stays are officially lifted, and then apply for another license.
Not all are happy
The Colorado Catholic Conference called Monday's U.S. Supreme Court action "disappointing" and said it "advances a misunderstanding of the institution of marriage."

The decision today by the United States Supreme Court not to act will have a lasting and profound effect on the family structure.  Nonetheless, marriage does not come from the state. It comes from God. Our desire is for people of good will to continue to grow in the truth and joy of marriage, so that when society begins to see the bad fruits of this decision, our families and the Church will be there as joyful witnesses of the truth about the family and human sexuality.

And U.S. Rep. Doug Lamborn, a Republican from Colorado Springs, was upset with the news as well:

“By refusing to take up these appeals, the Supreme Court has allowed unelected activist judges from lower federal courts to usurp the democratic process and undermine the constitutional rights of several states, including Colorado, to define marriage consistent with the values of their citizens.”