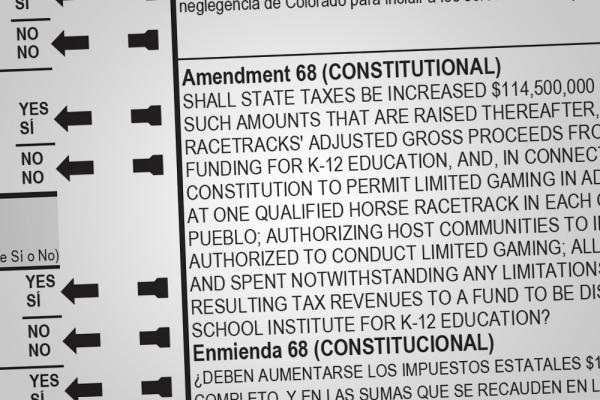 While much of the attention the 2014 election season has been focused on Colorado's Senate and gubernatorial races, voters will also be deciding the fates of four statewide ballot questions. One of those questions seeks to expand gambling at racetracks to help fund K-12 education.

If approved, Amendment 68 would allow horse race tracks in Arapahoe, Mesa and Pueblo counties to offer slot machines, roulette, craps, and card games such as blackjack and poker. Arapahoe Park in Aurora is at the center of the campaign.

"Races and wagering on horses has existed there for decades and so essentially what we're doing is creating an entire new revenue stream a whole new revenue source for K -12 education," said Monica McCafferty, a spokeswoman for the Yes On 68 Campaign.

A non-partisan legislative analysis said the initiative could generate $114 million a year for public and charter schools. Something supporters said is critical in a state where per-pupil spending is among the lowest in the country. Critics on the other hand, don't see it as the panacea for funding.

"This is not the way you solve those challenges," said Michele Ames, a representative with the No On 68 Campaign. "People will get the impression that they've solved the funding problems in K through 12 education if they vote for this. And that couldn't be further from the truth."

While the education community wants money for schools, many educators aren't backing the proposal. The Colorado PTA has come out against the amendment. Denver Public Schools went as far as passing a resolution saying the best way to fund schools is through property taxes and the state budget. The Colorado Association of School Boards said money from gambling would be unpredictable and unsustainable.

"Boards feel it would be a contradictory position to support a tax like the gambling tax, because they teach students this is not the best way of life, they think it would be contradictory then to take money from that source," said Jane Urschel, CASB's deputy executive director.

Colorado is still about $1 billion behind on education spending because of the recession.

The Yes On 68 campaign believes the money would be reliable – and without having to increase taxes like past failed ballot measures.

"The $114 million estimate based on not only this market but what they know about gaming as a whole so we are very confident in that $114 million figure," said the Yes On 68 Campaign's McCafferty.

Amendment 68 [.pdf] could also pave the way for gambling in Pueblo and Mesa counties – although no race tracks currently exist that meet the criteria for expanding. Arapahoe Park and its parent company Twin River Holdings is the only one that will immediately benefit.

Opponents say the amendment would essentially give Twin River Holdings a gambling monopoly on the Front Range. Existing mountain casinos in Blackhawk, Cripple Creek and Central City say it would put many of them out of business.

"Why would we cut a special deal for one single company and then lock it into our state constitution which can't be fixed or changed later?" said the No On 68 Campaign's Michele Ames.

But supporters believe the amendment would also create additional jobs and that there's room for everyone at the table.

"We do feel the experience at Arapahoe Park is more of a convenience casino, people may choose to during the day and go to the mountain on the weekend. The experiences are different and there's more market share, and we believe competition is good," said McCafferty of Yes On 68.

Both campaigns acknowledge breaking through the election noise can be a challenge. Voters are focused on other issues and key races. Analysts, like Colorado State University Political Science Professor Kyle Saunders, say that horse race track gambling isn't a topic that impacts most people's day- to -day lives.

"With all of this information it's really a difficult environment for the voters," Saunders said. "We ask our voters to do a lot, midterm elections, primaries, and that's a pretty demanding thing to ask voters to keep up with each one of these issues and have the depth of information in order to make a good decision."

Even with Election Day rapidly approaching – Saunders said polls show there are still a lot of undecided voters and when a topic doesn't impact people directly, undecided voters tend to eventually vote "no."

"There's a bias toward the status quo," Saunders noted.

That doesn't mean both sides aren't waging a vigorous fight. According to the latest campaign filing reports, supporters have raised $18 million, while opponents have raised $16 million. This makes Amendment 68 one of the costliest in Colorado history.

For more information on the ballot for the 2014 Colorado general election, you can consult the state voter information blue book online.