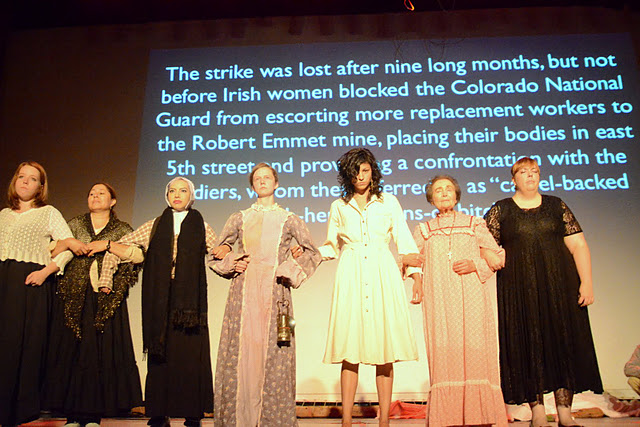 The Romero Theater Troupe's “An A(ctual) P(eople's) History of Colorado: A Play in Solidarity with the Students & Teachers of Jeffco" debuts Thursday at Regis University’s Claver Hall.

The "A" and "P" in the drama's title directly reference the term "Advanced Placement," and the title as a whole is a riff on the late historian and activist Howard Zinn's influential 1980 non-fiction book "A People's History of the United States," which seeks to recast this country's history through the eyes of everyday people rather than the moneyed and political elites.

The Troupe's production explores eight stories of activists and acts of civil disobedience in Colorado past and present. The content covers everything from the 19-year-old woman who led a Colorado coal miners strike in 1927 to the civil disobedience that led to Metro area buses becoming wheelchair accessible.

Troupe founder Jim Walsh, who also serves as a political science senior instructor at the University of Colorado Denver, thinks these are the types of stories that should be taught in Colorado history classes.

“These are stories we think the public needs to know,” Walsh says. “We believe that the way someone views history has a huge impact on the way they view the present. So we’re trying to have an impact in that way and have a little fun while we’re doing it.”

Walsh says that while he hopes the JeffCo school board is listening, he’s realistic about the play’s reach.

“We’ve been in touch with a lot of teachers and students - some of the leaders in the walkouts and the sickouts - and we’re expecting quite a few at the play,” Walsh says. “I don’t expect any of the school board majority might show up. But we would certainly welcome them if they did.”

The Troupe, which celebrates its 10th anniversary next February, takes a nontraditional, "devised" approach to the creative process, which they call "organic theater." The company's productions do not have directors, and there is no finished script when the actors start rehearsals.

Instead, cast members present story ideas, and each production evolves through improvisation and feedback from the team, until the final script is developed.

Although the timing of the production is auspicious, the idea for “An A(ctual) P(eople's) History” was hatched long before the current issues in JeffCo. Walsh says the Troupe prides itself on shining a spotlight on social issues, and the AP History controversy was an opportunity to attach the play to a current act of civil disobedience in Colorado.

Here are details about some of the narratives of Colorado activism featured in “An A(ctual) P(eople's) History of Colorado: A Play in Solidarity with the Students & Teachers of Jeffco":

Milka Sablich and the coal miners strike of 1927
Trinidad, Colorado native Amelia "Mildred" Milka Sablich was just 19 years old when she became leader of this movement on behalf of Colorado coal miners, a group that included her father, Anton Sablich.

Since union organizers were locked up or deported for taking part in the protests, many women took on the task of organizing the strike.

Throughout these protests, Sablich wore bright red and engaged men, including a mine guard, in physical altercations. She spent approximately five weeks in jail in support of the miners, and continued her work long after the strike ended.

Larry Ruiz’s fight to make RTD buses wheelchair accessible
Larry Ruiz, a Denver resident who suffered from cerebral palsy, helped lead efforts that eventual led to the passing of the Americans With Disabilities Act in 1990.

On July 5, 1978, Ruiz and 18 other handicapped people blocked a non-wheelchair-accessible Metro area bus, sparking a movement that began in Denver and spread to other cities around the country.

Rita Martinez leads the anti-Columbus Day movement in Pueblo
This year – for the 22nd year running – Pueblo’s Rita Martinez has led a protest and march in the hope of abolishing Columbus Day in her hometown and, eventually, the entire country.  Martinez, who is an organizer in the "Abolish Columbus Day Committee," feels the day celebrates the genocide of Native Americans in the United States’ early history.

This year’s march ended at the corner of Union Avenue and Abriendo Avenue in Pueblo, in front of a 109 year-old statue of Christopher Columbus.