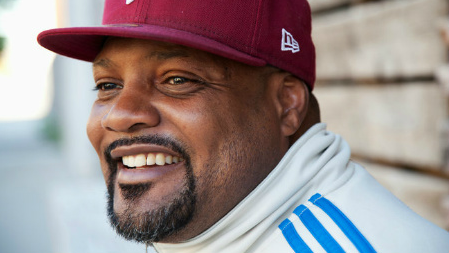 (Photo: Courtesy of Dr. Lorenzo "Rennie" Harris)Cultural institutions across the country are celebrating the 50th anniversary of a pivotal moment in U.S. history -- the signing in 1964 of a landmark piece of civil rights legislation by United States President Lyndon B. Johnson which prohibited discrimination on the grounds of gender, race, religious affiliation, color or national origin in schools, workplaces and public facilities.

This weekend, the 44-year-old dance troupe presents “On the Edge,” a mixed bill of works that address the nation’s ongoing process towards achieving equal rights for all. The performances take place at the Cleo Parker Robinson Dance Theatre in Denver's Five Points neighborhood.

“Free?” recalls a series of important historical events that occurred in response to the Civil Rights Act of 1964. They include the assassination of Malcolm X, the “Bloody Sunday” march in Selma, Alabama, the Voting Rights Act, and the Watts rebellion -- a riot sparked by racial issues in the Watts neighborhood of Los Angeles. All of these events happened in 1965.

Harris uses movement to explore these historical happenings and the progression of civil liberties in the U.S. over the course of 50 years.

While the dance draws on these specific incidents, Harris says the work is intended to be multiracial and intergenerational, speaking to the broader concept of human equality.

“The work questions whether we are now truly free or not,” Harris says.

The choreographer spoke with Colorado Public Radio in anticipation of the world premiere of “Free?”

CPR: "Free?" reflects on defining moments in American history, including the Civil Rights Act of 1964, the assassination of Malcolm X, the murder of three civil rights workers, "Bloody Sunday," the Voting Rights Act of 1965 and the Watts rebellion. How do you approach these heavy topics through dance?

CPR: How does using urban dance as your movement language help explore these themes?

Rennie Harris: Many people use the term "urban dance," but that's a very generalized term often used to describe styles such as hip hop and house. The work I've set has very little pure hip hop in it, but a considerable amount of house movement. House is a direct culmination of traditional African movement as well as other cultural movement influences, including folkloric and popular social dances.

Rennie Harris: The work questions whether we now are truly free or not. In spite of the advancements which have been made in civil rights, many inequalities are still very evident in our social and justice systems.

CPR: This work is described as your depiction of the "transformation" of this country. What parallels do you draw between these specific events and the state of civil liberties in our country as they currently stand?

Rennie Harris: In spite of the impact of major historic events that were factors in this work, I see many of our freedoms as more of a thinly veiled continuation of slavery under the guise of freedom.

CPR: What do you hope audiences take away from the work?

Rennie Harris: I have no single message for the audience. Whatever they take away from the show is what they are supposed to get from it -- what speaks to them individually. The goal is to have an experience that leaves a lasting impact.