Republicans' takeover of the Colorado Senate will make for a complex legislative session when it begins in January. Democrats still control the House and the Governor’s office, meaning any bill that passes will need bipartisan support.

One big question for next session is how hard Republicans will try to undo some of the Democrats’ recent policy gains. Those include laws benefiting undocumented immigrants and an election that moved Colorado to all mail ballots. But their main target is likely to be the gun control bills Democrats passed two years ago. Senate President Bill Cadman is hinting his party will make them an issue.

'"[I] think it was John F. Kennedy who said ‘an error’s not a mistake until you refuse to correct it’? Maybe we give them a couple opportunities,” Cadman says.

That’s not an opportunity House Democrats seem too interested in. Rep. Dickie Lee Hullinghorst, D-Boulder, will take over as speaker next session, a step up from her current role as majority leader.

"Quite frankly I’m very proud of the work that we did in the past two years," Hullinghorst says. "Maybe there are others that disagree with some of that. And if they do and if they introduce bills that are worthy of discussion, we’ll talk about it. And we’ll see what happens next."

You can expect some political fireworks if Senate Republicans do make a serious attempt to roll back the Democratic gun control laws. But it will take some major politicking for any such attempts to be successful.

"It takes a lot of parliamentary skill to really get the things through that you want," says Claire Levy, who heads the liberal Colorado Center on Law and Policy. She  served two years in a split legislature as a Democratic representative. "Each party has to really deal within their own caucus very carefully about setting realistic expectations."

Levy describes this kind of session as a balancing act. The parties have to maintain a functional relationship to get anything passed. But individual lawmakers may have more freedom to introduce extremely partisan bills without their leaders worrying about the repercussions. 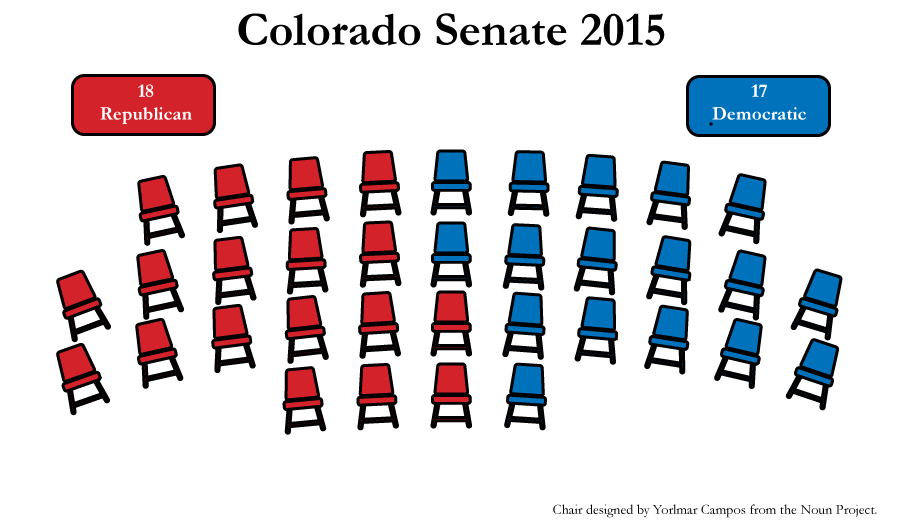 Instagram: @mattdallas"In some ways each side can play to their base, throw them some red meat, knowing that they actually aren’t going to be able to pass that," Levy says.

But for some lobbyists, split control may mean a quieter legislative session next year. Lauren Furman represents the Colorado Association of Commerce and Industry. Her group played a lot of defense when Democrats controlled both chambers, trying to kill bills the business community didn’t like. She calls this month’s election results a game changer.

"Issues that we have dealt with in the last couple of years, dealing with labor and employment issues, or renewable energy issues, or anti-fracking issues, all of those things are going to be very challenging to get passed out of both chambers," Furman says.

Lobbyists not backing down

That doesn’t mean some groups won’t try. Conservation Colorado will continue its push for new environmental regulations, whether or not they’re likely to survive the Republican Senate.

"Drilling didn’t stop on Nov. 5," says Conservation Colorado lobbyist Becky Long. "Just because politics changed doesn’t mean that we don’t still have an even greater need to find real solutions to the real problems that are out there."

There will be areas where the chambers work together including on the state budget. Colorado requires lawmakers pass a balanced budget. In recent decades they’ve always managed to do so, no matter who was in control.

This year could see fights over tax credits, taxpayer refunds, and which state services should benefit from increased funding. Republican Sen. Kent Lambert,the new chair of the Joint Budget Committee, told his colleagues his watchword will be “humility.”

"There will be shared ideas," Lambert says. "There will be some budget challenges this year. And we need to approach this in a humble attitude and work together to make this all come out."

Work on next year’s state budget has already started. The rest of the legislative fights will have to wait until the new session begins in January.