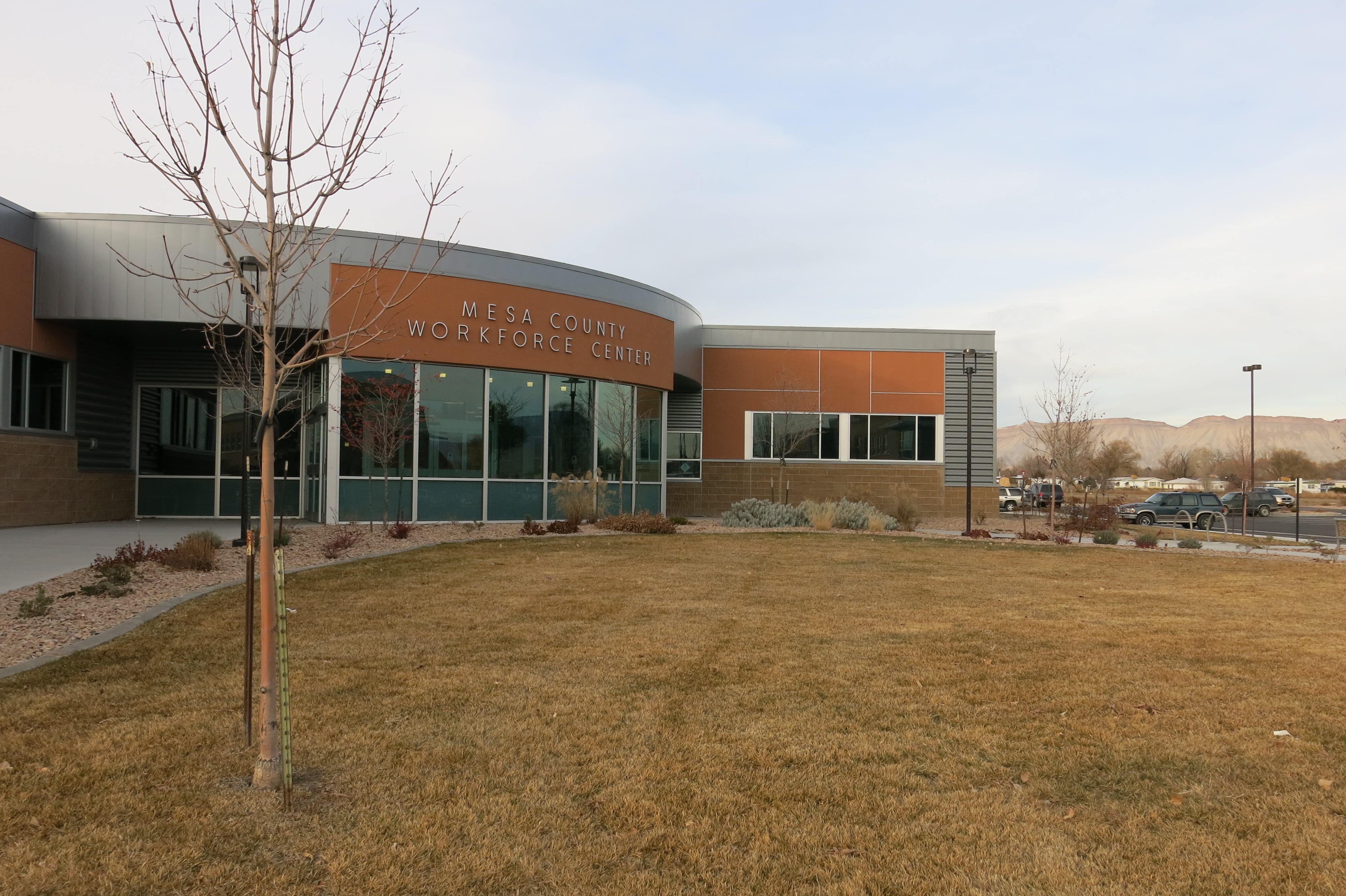 (Photo: CPR/Megan Verlee)On Thursday, Gov. John Hickenlooper announced a new $3 million effort to get the state's long-term unemployed back to work. To do that, the governor hopes to increase skills training and other employment services at Colorado's Workforce centers.

But in some parts of the state, those centers are taking a broader view of their role and trying to do more to help the poor become truly self-sufficient.

That new thinking is evident at the Mesa County Workforce Center in Grand Junction. For 16 years, Mesa has worked to turn its center into a one-stop-shop for job help and assistance.

There, people who come in for help finding work often leave signed up for multiple public services.

Almost 600 residents a month received benefits last year from Colorado Works, the state’s version of welfare, through the workforce center. The center also helps with enrollment in the childcare assistance, food stamps and other federal programs.

Coordinating all these services sounds like it should be simple, but it’s not at all how public assistance usually works. Different programs have different funding sources, different eligibility requirements and different staff, leaving those in need bouncing from one office to another.

“We understand how many appointments somebody in poverty may have to attend. And how much that reduces their even ability to job search,” said Miller. “[It] probably feels like a full-time job.”

Mesa increased its investment in these integrative “wraparound services” last year when the county unveiled a brand new $6.5 million center to replace a cluster of temporary buildings that had housed it before.

The new facility boasts a computer lab, GED classrooms, even a daycare. But perhaps its strongest asset is its least glamorous: a giant open room Miller calls “cubi-land.” Here staff from more than a dozen agencies work side by side, allowing them to coordinate customer needs not through email or memos, but with just a shout over a partition.

Mesa County Commissioner Rose Pugliese is one of the workforce center’s biggest champions. She says the goal here lines up well with her conservative beliefs.

"I am a very big limited-government person. But we want to make these people productive members of society, it benefits them as well," Pugliese said.

There are a lot of families in Mesa County that need the help the center offers. The unemployment rate in Grand Junction has remained significantly higher than the state average, and the number of people on public assistance continues to climb.

“I think other counties look to Mesa as a leader in this area,” said Jefferson County Human Services Director Lynn Johnson. “They have been a model of true partnership and integration that I know we have tried to replicate here.”

Mesa County’s collaboration is possible in part because the workforce center is run by the Human Services Department, which also operates TANF and other federal assistance programs. Most of Colorado largest counties operate that way.

In more rural areas workforce centers are state-run, making it harder to integrate them with social services.

Rosemary Pettus, regional director for workforce centers in the central mountains and northwest Colorado, says her staff work closely with their county counterparts. But how closely depends on circumstance.

“We have strong relationships, but they seem to get stronger and stronger when we see more needs on the part of our customers,” said Pettus.

“ 'Wraparound services' is the hot thing in government programs right now, but it's easier to talk about than to achieve,” said David Socolow, a workforce policy analyst with the Center for Law and Social Policy.

"What we’ve seen in a lot of places is co-location but without true cooperation,” said Socolow. "So you can have one center in an area that has in it an office for some public benefits and an office for job training and an office for helping people with unemployment insurance and many other different programs."

"But in fact, the people in those offices don’t really hand off people between them very well. And that’s the hard work,” he said.

The federal government is trying to ensure those relationships are strong. In 2014, Congress passed a major overhaul to the federal program that funds workforce centers, requiring more collaboration between employment programs, vocational education, and public assistance.

In Mesa County, the conscious effort to coordinate programs does seem to be paying off for some residents.

On a recent weekday, a deli worker named Heidi came to the Workforce Center to sign up for TANF and food stamps. Heidi, who didn’t want her name used for privacy reasons, is giving birth to her second child this month and is planning to take three months of unpaid time off from her job afterward. The public assistance programs will make that possible.

As her 11-month-old daughter cooed in a caseworker’s arms, Heidi explained that she’s used all sorts of job center services over the years: to look for work, to get assistance with childcare so she could keep her job, and for longer-term help with her goal of a medical support career. Along the way, Heidi has come to trust the center’s staff.

“Today I came in, I knew what I needed … I think that if I didn’t know what I needed, they definitely would have been able to help and would have suggested those programs for me,” she said.

Without the center and the services it provides, Heidi says her life would be a lot more difficult.

“Being a single mom and having a new one on the way, I can’t work, I can’t do anything, so I’d have to move home and rely on my family to take care of my kids and to take care of me, instead of me being able to do it myself,” Heidi said.

Being able to do it yourself is the end goal of all workforce centers. For all of Mesa County’s focus on getting people connected to public assistance, the final measure of the center’s success only comes when they stop needing it.