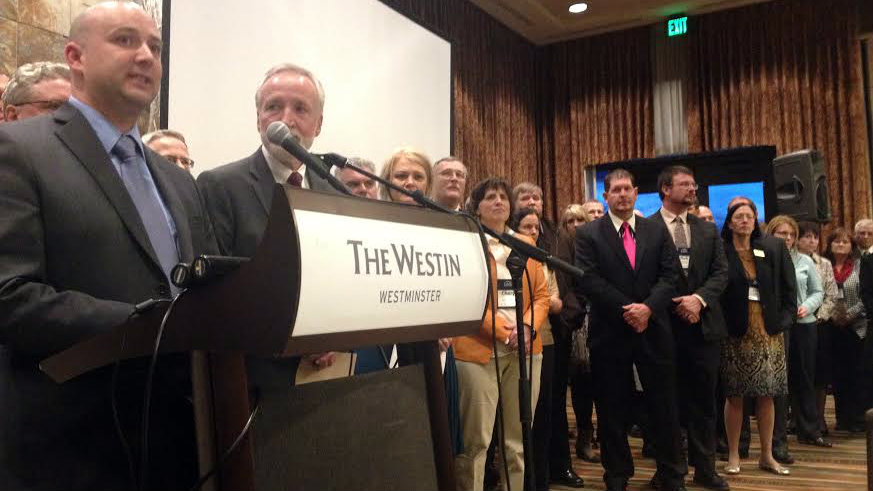 Pam Swanson, superintendent of Adams 50 school district northwest of Denver, says 8 out of 10 of her district’s 10,000 students are poor.

“The fact of the matter is it simply costs more money to educate at-risk students,” she said at a press conference on the opening day of the Colorado Association of School Executives annual meeting. “Most of them enter the school system behind their peers and often bring additional challenges.

She says it’s unrealistic to ask her district’s residents – retirees on fixed incomes and working families – for more tax dollars. She believes it’s a state responsibility.

The superintendent’s request is on top of a $200 million dollar request from Governor John Hickenlooper.

Superintendents say they haven’t recovered from the $1 billion cut from schools during the recession.

Paul McCarty is the superintendent of the Hanover school district, which is between Colorado Springs and Pueblo. He says his district has outdated text books and science equipment, among other challenges.

“Our challenges have ranged from roof leakages to well pump motors seizing on the first day of school to tumbleweeds blowing up and blocking our emergency exits to the point where we had to have our staff clearing those in order to be able to open school for the day,” he says.

McCarty says his district has had $2 million removed from his budget since the Great Recession – leaving the district’s budget now at $3 million.

At the same time, he said his district has had to purchase 75 refurbished computers and headphones to comply with new testing requirements, “money that could have been targeted directly for student achievement.”

Superintendent Kirk Banghart of Moffat County Consolidated School District #2 said decisions about where any new funds go needs to be made by local school boards.

“Our local school boards were there when it [money cut from budget] had to come out and they had to make those tough decisions,” he said to applause to dozens of superintendents. “Allow them to decide where to put it back in.”

Banghart said the “more chronic problem of a structurally flawed system of financing Colorado’s schools still exists.”  He said superintendents are ready to work with lawmakers to identify solutions to funding dilemmas “imposed by a myriad of statutory and constitutional conflicts that currently exist in our state.”

Superintendent McCarty of Hanover district noted that the annual state audit of school districts’ fiscal health in 2011 found 19 school districts with one or more warnings about fiscal problems. In 2012, that number rose to 48, and in 2013, 76 of 178 districts showed warnings.

“Our children and the health of our communities are too important for us to stay quiet and hope that we will eventually see the funding that our students deserve,” he says. “The education of our children is the economic driver that helps to move our economy. We owe our children nothing less.”