Waiting with her mom Sylvia, Analiya isn't very talkative. But she flashes a smile that shows why she's in the hospital: Analiya needs intensive work to be done on her rotted teeth. She's wheeled into a bright hospital room, with half a dozen medical staff prepping for surgery. The anesthesiologist places a breathing mask on her face, and asks Analiya to take big deep breaths. Soon she's asleep, under general anesthesia.

A few minutes later, her dentist, Dr. Roopa Gandhi, pulls out Analiya's badly decayed front teeth with shiny silver pliers and a nurse drops them into a plastic specimen jar.

These four teeth will go to the Tooth Fairy, but that's the only happy part of this. An hour and half later, Analiya ends up with four extractions, four fillings, two baby root canals and two crowns. Her mother Sylvia isn't surprised her daughter needed this dental work.

"She eats a lot of candy and drinks a lot of pop, so I'm not that surprised," said Sylvia Aguilar, who lives in Aurora.

Across the hall, a 2-year-old boy will have eight teeth removed. He has cavities in all 20 teeth. This is the daily reality here. At Children's Hospital Colorado alone, more than 3,000 children visited the operating room for dental surgery last year. The cost: $10,000 to $15,000 per case, said Dr. Patty Braun, a pediatrician at Denver Health. 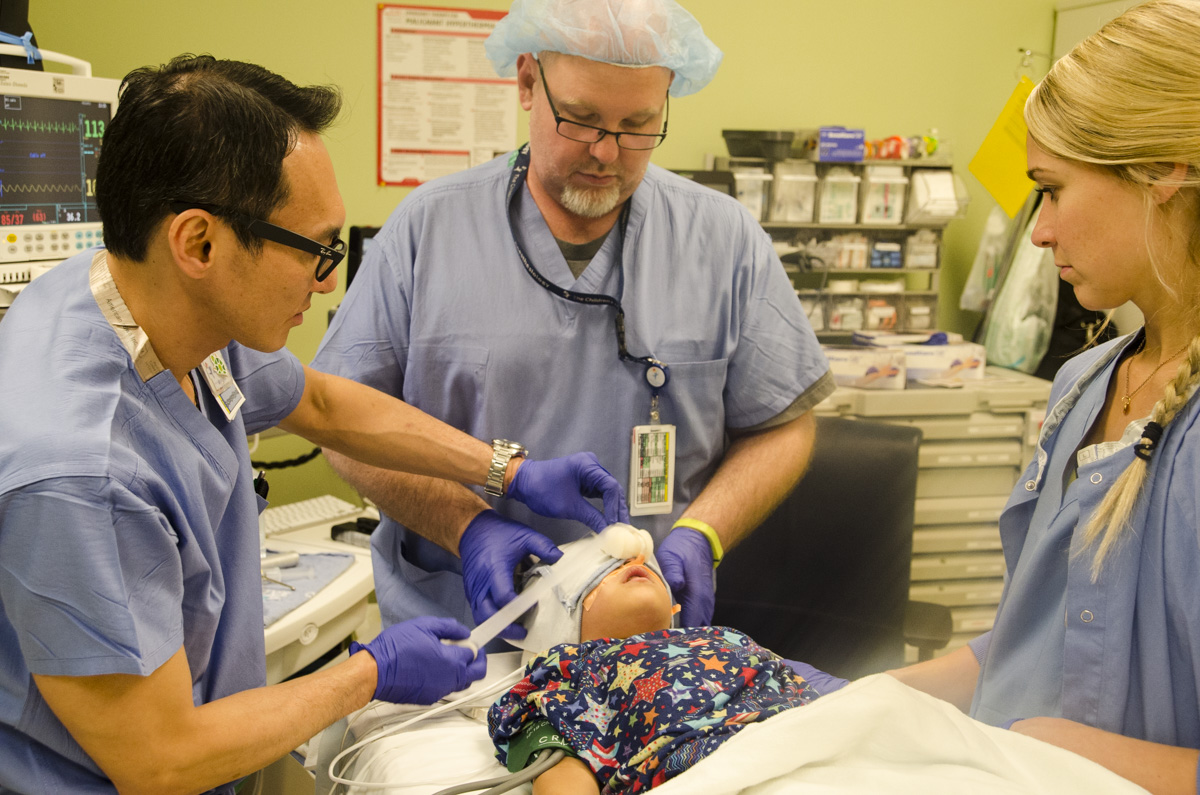 (Photo: CPR/Nathaniel Minor)"If you just do the math on that, that's over $40 million" a year spent in the operating room on restoring the damage done by a preventable disease, Braun said. "That's one hospital, in one town."

"Really, it's the silent epidemic," said Braun. "It's the epidemic we aren't hearing about and need to do something about."

Braun said a lot of factors contribute to the cavity crisis. Many parents think cavities aren't a problem until a child gets adult teeth, so they don't take their kid to a dentist until they're older. Many allow kids to eat too much sugar. 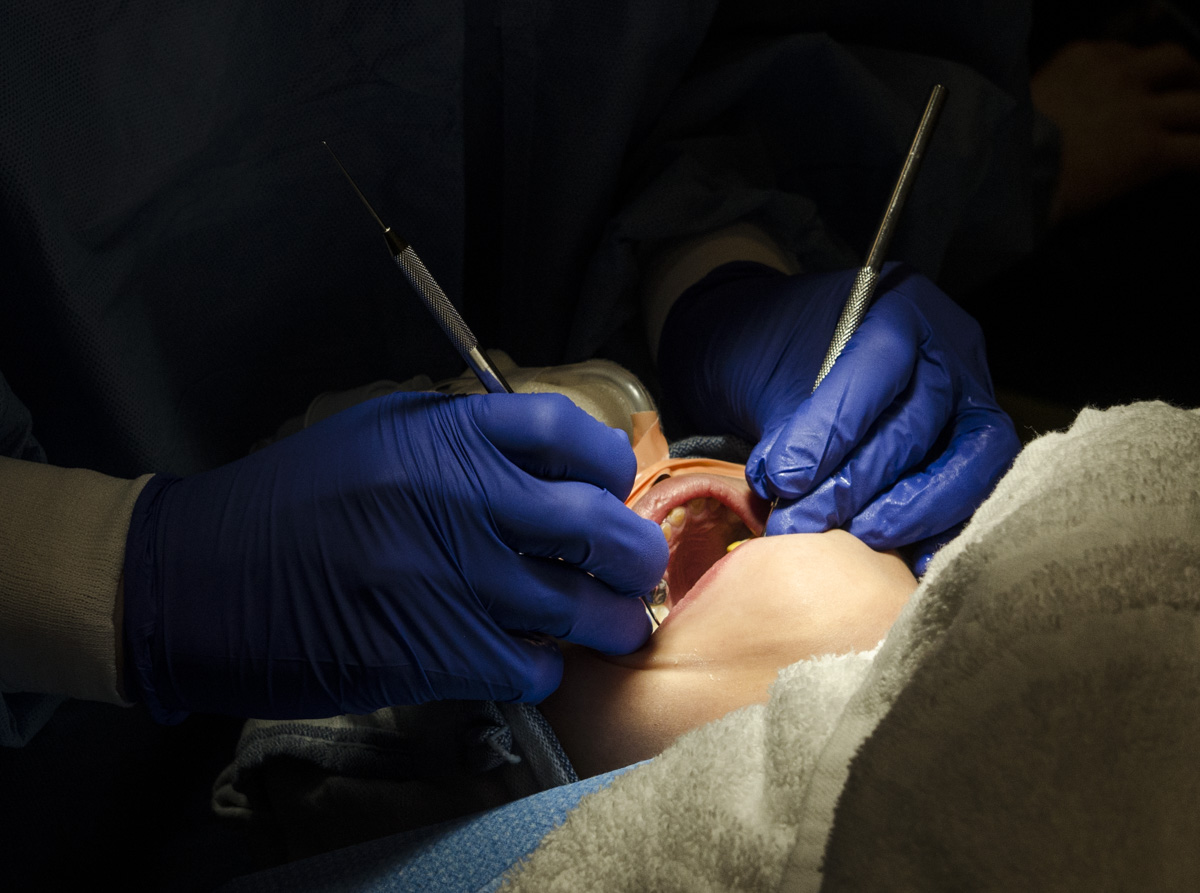 Recent data from the state shows Hispanic children and kids from low-income families are more likely to have teeth in fair or poor condition. 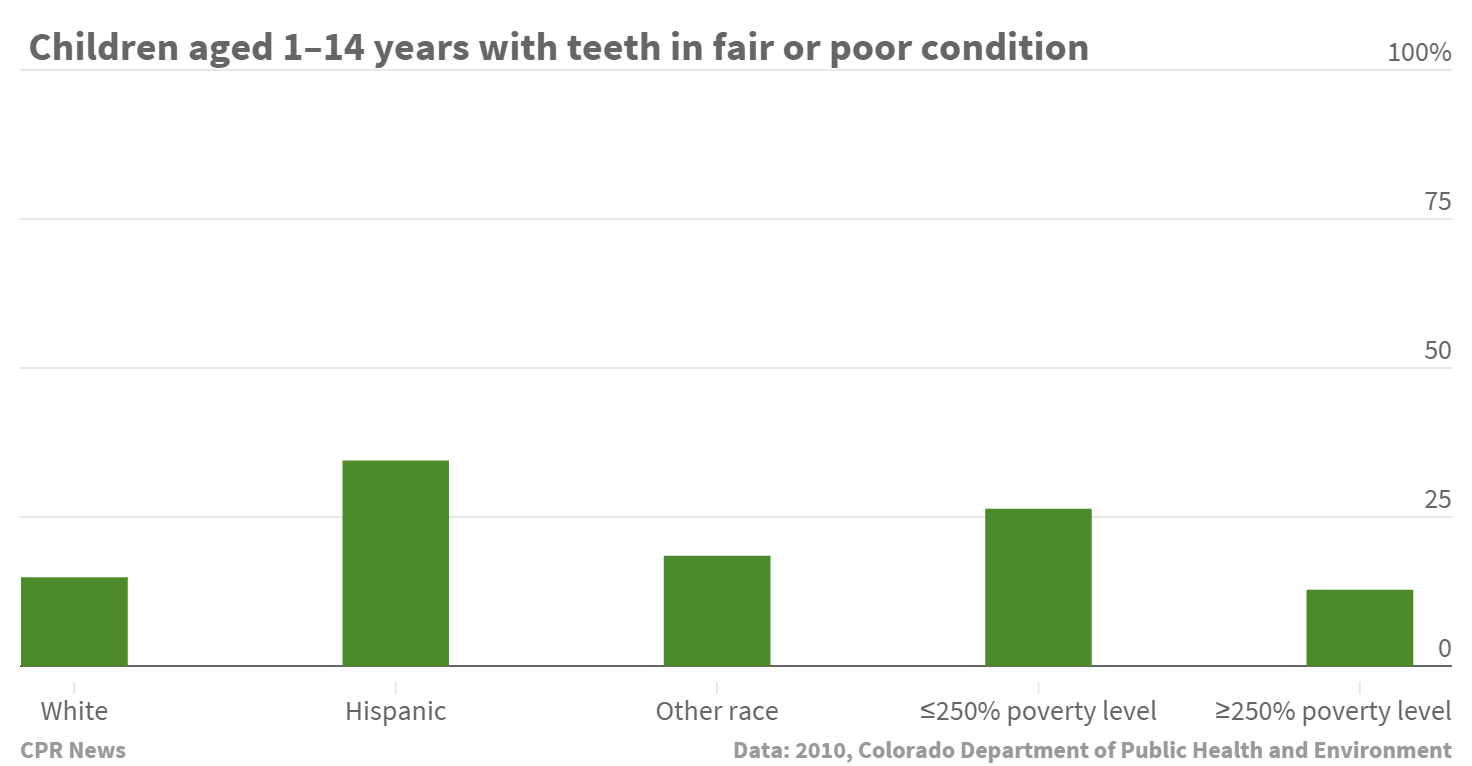 Similarly, low-income kids are less likely to receive preventative dental care. In some communities there aren't enough dentists to handle the need. Too few are willing to treat kids enrolled in Medicaid, like Analiya Aguilar. Braun said many families struggle to get enough food on the table, so often oral health isn't a top priority.

"If you are poor, your likelihood to have bad teeth is exponentially higher than if you're not poor," said Braun. "But, with some changes, we can fix that."

Fixes in the works

A big push is on to do just that. Braun said Medicaid began reimbursing providers for basic preventive service like fluoride varnish application in 2009. This reimbursement is only for children under five at well child visits.

Delta Dental of Colorado Foundation is funding a new project to integrate dental hygienists into medical practices, especially in places where there are no dentists at all. It's also backing a campaign to improve the dental health of low-income children.

Most patients here are low-income. The staff gives dental care and prevention tips to parents and kids.

"I think it's awesome," said Haruna, who lives in the Green Valley Ranch neighborhood of Denver. "I'm glad I've started I've bringing my kids here since they were young, so now their teeth are healthy."

Dr. Roopa Gandhi laments the general lack of dental prevention available to many poor families. She said in rare cases a child could die from an infection that started with a cavity, or complications from the surgery to fix it.

"I felt scared when I saw her there asleep," said Aguilar. "[It's] uncomfortable to see your child go through that at such a young age."

Aguilar said she plans to limit Analiya's candy, pop and junk food from now on. The reason won't be hard to remember. Her daughter's new smile will be without the majority of her teeth.