On most days, downtown San Luis is a quiet place. The town, the oldest in Colorado and seat of Costilla County, is just a short drive from the New Mexico border.

Last week though, it was anything but calm. A crowded county commission meeting that drew impassioned speeches spilled out into the street, and two groups formed. One, made up of long-time residents, chanted "we support the police." Members of another, comprised of mostly newer residents that live off the grid, shouted about constitutional rights and filmed the scene as police pushed them down the block.

"Turn around or you're going to get tased," one officer says.

"I really don't want to jail you guys," another adds.

The scene was the public culmination of a feud over land use regulations and much more that's been simmering beneath the surface of local government in the southern reaches of the San Luis Valley.

Costilla County has seen an influx of residents who are lured by cheap and beautiful land, relatively lax land-use regulations, a desire to be left alone and, according to county officials, legal marijuana. But some long-time residents say the newcomers are stealing water from the Rio Grande River and other area waterways, taxing the county's social services and schools, and not abiding by existing land-use rules.

Those rules might be soon be tightened. The recent commissioners meeting was packed after word circulated among off-grid residents about proposed changes to the land-use code, which governs how lots can be built upon. Off-grid residents say the changes are targeted at them.

Costilla County is unlike its neighbors in the San Luis Valley in an important way: It's mostly private land. It's been split into some 40,000 subdivided lots that sell for as little as a few thousand dollars. Those homes sell and sell, as part of a trend that stretches back decades.

A High Country News article from 1997 told of newcomers buying plots of land in the county, only for the land to be abandoned after a few years of little building and piles of property tax bills. That article mentions a 1979 Washington Post story about a similar phenomenon in other parts of rural Colorado.

Unlike those schemes, which were advertised in magazines, today's commerce is done online. Listings on websites like LandWatch.com and Smile4uinc.com tout "fantastic" property with few rules. 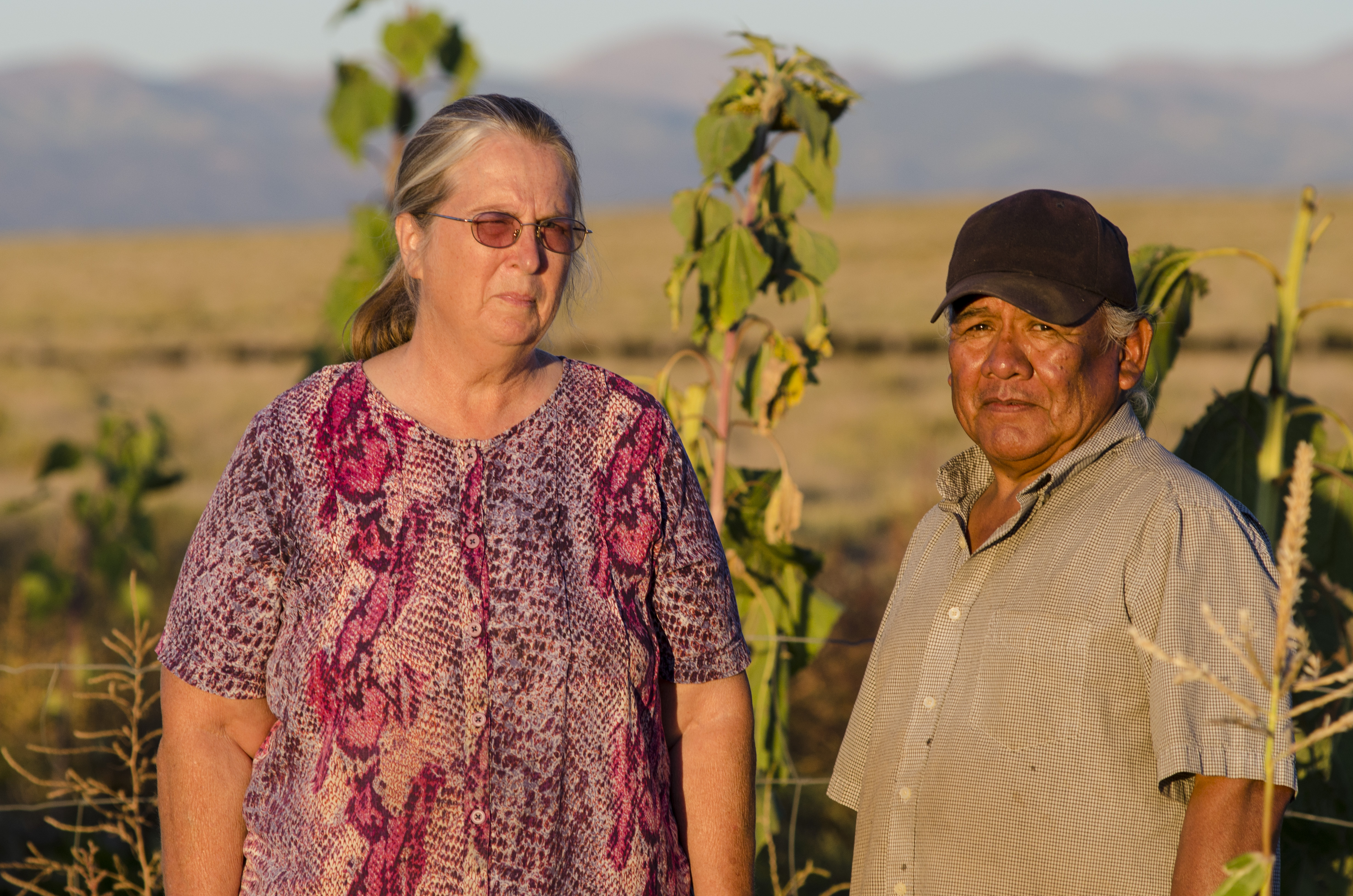 (Nathaniel Minor/CPR News)“When you buy the land they make you think you can do anything with it," said Robin Rutan, who moved to a plot about 20 miles west of San Luis five years ago. She and her husband Mitchell Silas bought their land after being priced out of Glenwood Springs.

“We’ve been regulated out of life," she said. "I came here because I couldn’t live by the codes."

Even so, Rutan said she did her homework and bought necessary permits. She's done her best to stay within code, as have other off-grid residents in the valley who spoke with CPR News.

Just up the road though, Rutan's new neighbors Chloe Everhart and Hyrum Jensen are law-breakers -- despite their best efforts. Everhart said she left her low-wage job in Montrose behind to start an "intentional community." Jensen, who said he served in the military in Afghanistan, can't stand to be around large groups of people. Just minutes from the Rio Grande, they found solitude. 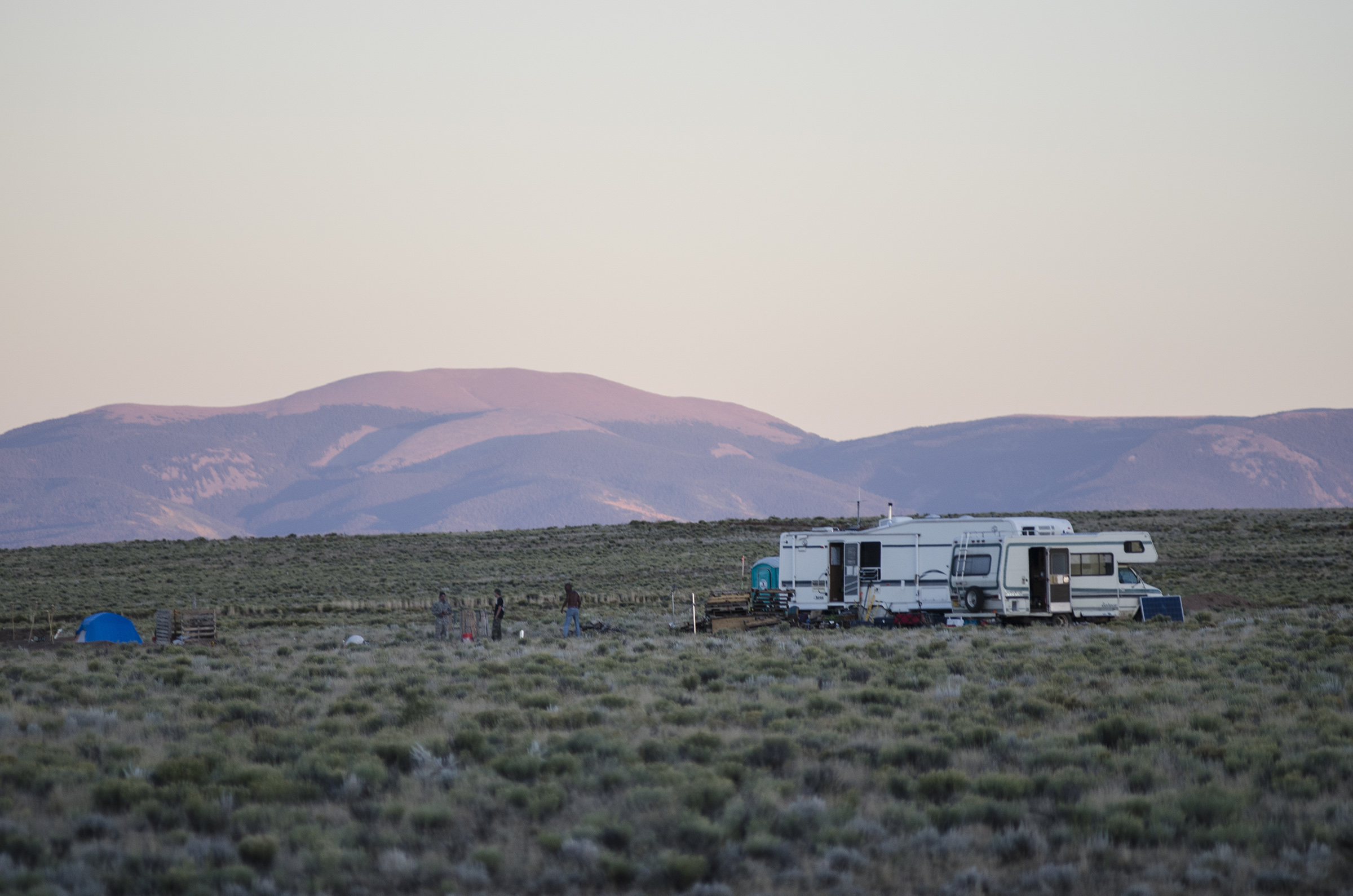 (Nathaniel Minor/CPR News)Everhart said they did research before buying their land. Key to their plan was a 90-day camping permit; camping on residential plots is otherwise only allowed for 14 days per every three months. Many people who go off the grid camp in RVs and tents as they build their homes. Many choose to build with alternative materials like straw bales or earth bags, both of which are allowed under county code.

Their permit was denied though. Just as Everhart and Jensen were arriving, the board of county commissioners instructed the planning and zoning office to stop issuing the camping permits.

"They started enforcing the changes before they were actually made," Everhart said.

That's a charge land use administrator Matt Valdez disputes. He said existing code allows his office the discretion to deny camping permits. Too many new residents were constantly trying to renew permits that are meant to be temporary, he said.

“We’re not trying to drive people off their property," he said. Rather, Valdez said he wants to make sure rules are followed for aesthetic and safety reasons. Winters can be harsh with temperatures that bottom out at 40 below.

Everhart said she knows she's in for a tough life in the high desert. And she embraces it.

“People who come out here have already been through a lot," Everhart said. "For a lot of us, there’s not much of a home to go back to. … What’s next could be under a bridge in Denver."

Other changes to the code would require water, sewer and electricity to be installed prior to building permits being issued. And small lots could only have one dwelling unit.

(Update Oct. 2: County officials have dropped their proposed changes. And they now tell CPR News they already have the discretion to require water, septic and electricity -- in addition to a variety of other permits -- before they grant a final building permit. The changes would have made that more clear, they say.)

A planning committee still needs to issue formal recommendations, which could happen in early October. After that, the county commissioners would vote on it. Reached in San Luis, two commissioners, Lawrence Pacheco and Joe Gallegos, said they have no opinion on the proposal until they are given the committee's recommendation.

As with many conflicts across the West, part of this one can be traced back to water. A single spigot, actually. In San Luis, locals used to take a gallon or two of water from an artesian well on private land. The well was locked up, locals say, after new residents would come into town with giant water tanks and fill them up.

"Every drop, especially in this valley, is appropriated to somebody," he said. Rio Grande water rights are shared among Colorado, New Mexico, Texas and Mexico.

Officials surmise the water is being used for marijuana grows out in the county. The Denver Post in June reported on a boom of would-be marijuana entrepreneurs and users in Costilla County -- a story that Doon says has only amplified with the arrival of new residents.

Off-grid residents told CPR News they disputed the notion that marijuana was their reason to move. Meanwhile, code enforcement officers estimated 50 greenhouses have been built, and a majority are being used for marijuana.

The new residents are also putting pressure on social services and the schools, officials say. Doon said 58 new students enrolled in the town's school this year, a significant increase for a county with a population of 3,500.

"The vast majority is from people out there," Doon said, referring to the off-grid residents. "Kids are coming to school [who have] no access to running water, no access to proper toilets, no access to laundry."

The county estimates at least 800 people live off the grid.

Just as it facilitates land purchases, the Internet has proven to be an important part of the current dispute in Costilla County in other ways.

Before the meeting that turned rowdy in downtown San Luis, Everhart and Jensen succeeded in packing a planning committee meeting Sept. 9 by advertising it on a Facebook group they started -- "SLV Just Us." Many off-grid residents said they hadn't met each other until that meeting, but now much of their organization -- as much as the independent-minded group will allow of themselves -- happens there.

Those discussions are fueled by the videos of Alex Ansary, who has filmed public meetings and interviewed off-grid residents who say they've been harassed by code enforcement officers. Ansary, from Portland, Oregon, says he's trying to expose corrupt law enforcement and public officials.

While the Internet helps off-grid residents organize, it's also a forum for troublemakers. County commissioners' cell phone numbers were posted online, then were attached to fake classified ads for free cars and other items. That led to hundreds of unwanted calls and full voicemail inboxes.

Code enforcement officers say the chatter makes them nervous. One thread notified the Facebook group that the police were in the area. "Lets go [sic]," the top comment said. The officers took that as a threat.

"Of course we are going to be on our toes," Sheriff's Deputy Cruz Soto said. "We all have families we want to go home to."

Such comments, especially on Youtube, could be from people who are miles away from Costilla County. But they've filled the gap in a discussion between the long-time residents and the newcomers that many say never happens outside of the Internet and tense public meetings.

And though Everhart does her best to strike a positive tone in her Facebook group, she said she worries about the lack of communication.

That thought was echoed by Carlos Martinez.

"There's no place to meet them," Martinez said of the off-grid residents. He grew up outside of the San Luis Valley but moved back to help care for a relative with failing health. Even with his family's history, Martinez said he was not fully accepted by the community for years.