Genoa-Hugo Elementary school, an hour east of Denver, only needed one of them. But, "they had zero applications last year,” said Robert Mitchell, Academic Policy Officer for Educator Preparation with the Colorado Department of Higher Education. “That is somewhat telling.”

He says Colorado’s rural school districts are on the brink of crisis when it comes to finding enough teachers to lead classrooms. Even urban districts along the Front Range are struggling to fill positions.

Mitchell says Colorado is just not producing enough teachers. So far this year, enrollments in the state's teacher prep schools are down 23 percent compared with five years ago. 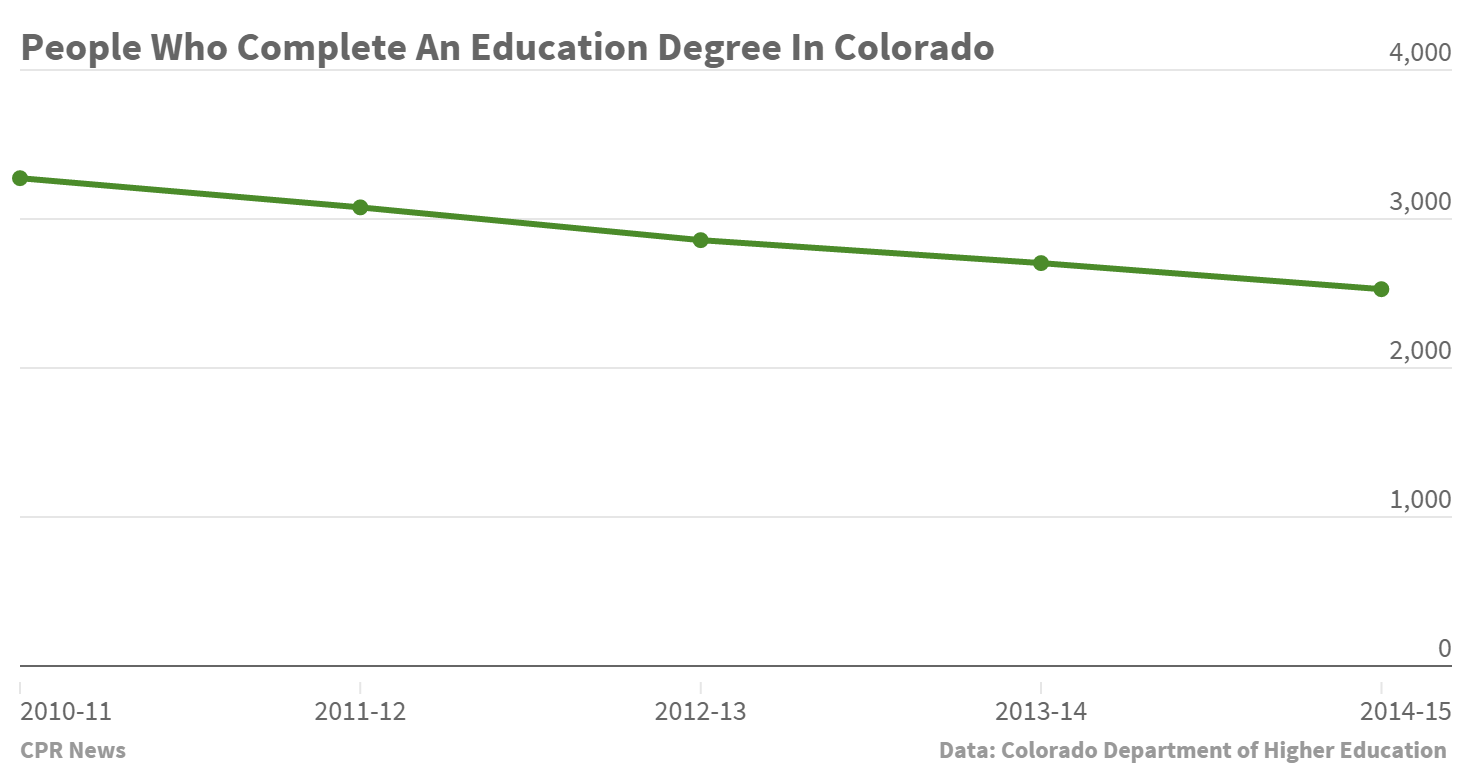 “We fought over a math teacher a couple of years ago with Greeley, and we won,” said Amy Spruce, recruitment and retention administrator with the Adams 12 Five Star Schools district, northwest of Denver. It includes Westminster and Thornton.

Spruce has been in the HR field for many years. She’s seen the ebbs and flows of teacher supply. But now, she says, “we are dealing with a teacher shortage.”

Finding Teachers From Other States

“The sheer number of teachers that we need aren’t available so we’ve started going out of state to recruit where there’s a surplus of teachers like Michigan or Utah where they're just churning out more teachers than they can hire, trying to convince them to come to Colorado,” Spruce said.

Though Colorado’s shortage mirrors what’s happening in many other states, she has noticed that in the states with teacher surpluses like Utah, teaching just seems to be a more elevated profession  and colleges sell the career more. Students here, she says, seem to enter college knowing what they want to do and more often than not, it’s not teaching.

“We don’t necessarily have the right pool of teachers here so we will go out of state to find those math teachers, those speech language therapists, the minority teachers,” he said. “With a smaller pool of candidates, there are fewer high-quality teachers.”

“Our political landscape right now -- it is extremely difficult to be teacher right now in our state in my mind,” said Don Anderson, director of the East Central Board of Cooperative Educational Services, which provides services to local member school districts.

“In the last five to six years, we’ve had several mandates that were truly unfunded, went through a recession, put more on people’s plates and didn’t take anything off. And so that political landscape has caused people to ask, 'Do I really want to be a teacher?'"

Principals and other school officials say that Jefferson County has lost hundreds of teachers because of political turmoil there.

Pueblo, a district struggling academically, has had to bring teachers out of retirement to fill posts.

In several metro Denver middle and high schools at the start of this year, there were still job postings for math and science teachers. That means more uncertainty: a last-minute need for qualified substitutes, classes divided among other teachers, special instructional coaches brought in to help existing teachers handle the changes.

New testing and new teacher evaluations have added to the pressures of the job. The news media doesn’t help either, says Superintendent Denille LePlatt of the Primero district near the New Mexico border.

“We’re getting so much negative press on those two, it makes it hard for people who are in education to be positive, let alone recruit more,” she said.

The CDHE’s Robert Mitchell is concerned about the large number of teachers who’ll be retiring soon. But there's one thing that really keeps him awake at night:

“We've traditionally depended on the sons and daughters of educators that went into teaching, that is starting to dry up a little bit,” he said. “[I've been] talking to more and more teachers who are recommending to their children not to go into teaching. That is going to be a bigger issue down the road.”

Rural Colorado Struggles The Most

Urban Colorado has its struggles – but elsewhere, it’s worse.

“I don't use the word crisis very often but we are on the brink of crisis in the rural school districts,” Mitchell said.

Rural Colorado already had some big hurdles. First, there’s the isolation. When the East Central Board of Cooperative Educational Services' Don Anderson was a principal in Burlington, he’d often travel to career fairs with a prop.

“I took a map so they could see, ‘you are 2.5 hours from Denver and 3.5 from the mountains so you need to know where you are going!’” he laughs.

Anderson planned a career fair in Limon last April. Twenty-five rural districts wanted to be there.

“We had three teaching applicants,” he said.

So it was canceled.

Perennial shortages used to just be in math, science and special education, "but today, it’s the entire gamut, its history, PE, elementary,” he laments.

Eastern plains and southern districts often have to correct misconceptions about Colorado. Superintendents say especially when recruiting from Texas, Kansas, Oklahoma, some candidates think they’ll be in the mountains.

“It’s a poor community, there isn’t a bustling social scene, said Las Animas superintendent Elsie Goines. “There has to be a lot of intrinsic rewards.”

The school making up the Arickaree school district is located in the middle of a farm field in eastern Colorado. The closest town is 10 miles away, says superintendent Shane Walkinshaw.

“We’re 45 minutes form a grocery store so that takes some getting used to,” he said. “A lot of times when we’re successful with keeping someone [teachers] it’s because they were raised in a rural setting so it feels like home to them. If you’re coming from the city and you come out to where we are, it can feel like you are in the middle of nowhere.”

When there isn’t a pool of candidates, rural districts hire who they can get. If a candidate just has a general bachelor’s degree, he or she can take alternative licensure classes and get an emergency authorization that’s good for a year. Goines barely found a math teacher this year.

“I managed to find a young man whose waiting hear back to here if he can join the state patrol training and so in the meantime he’s decided to work part time for us to be a math teacher,” Goines said. “We’ll know in January if he’s actually going to stay the rest of the year.”

She and her fellow superintendent’s biggest hope?

“If we bring a new teacher out, if all works out they meet someone, they get married and they stay!” she said.

How To Entice Teachers

Short of matrimony, already cash-strapped rural districts are now thinking they need to focus on incentives -- forgiving student loans, paying for continuing education, or off -setting housing costs for teachers. Primero district already does this. Housing units across the street from the school are $300 a month – and are full.

State legislation for loan forgiveness for teaching in rural Colorado is another budding idea.

Garfield County’s School District 16 east of Grand Junction will pay for a teacher’s master’s degree if a new teacher commits to five years.  In the eastern plains region, says Don Anderson, to encourage speech therapists and others to get the master’s degree they need to allow them to administer and analyze tests – his organization will pay $4,000 for a two-year commitment.

Rural districts are also brainstorming ways to grow-their-own teachers – partnering with teacher colleges to talk to local 11th and 12th graders. Another idea is targeting people with bachelor’s degrees in the community for an alternative licensure program.

Primero’s LePlatt tries to sell teachers on the congenial atmosphere of the small school.

“We don’t have an administration office, we don’t have separate schools, we’re [an] all-in-one campus,” she said. “So it makes it really easy to talk to everyone every day. We try to focus on the family atmosphere -- both for our students and for our staff.”

Mitchell, at the department of higher education, tries to stay optimistic.

“There are a lot of barriers, a lot of obstacles but we will find a way around them over them, through them, whatever we have to do, we will get great teachers in those classrooms,” he said.

But he, like Adam’s Five Star's Spruce, thinks the shortage will be problem for a while. Spruce says that will persist until perceptions are changed about the teaching profession:

“If everybody realized what they [teachers] had to do, they should be really elevated to that professional dignity of a doctor or someone like that,” she said. “They’re really shaping the future for our state.”