School board races are typically ho-hum for most voters. But the race in Colorado's second-largest district is saturating social media, lighting up talk radio, and sending hundreds of volunteers on door-knocking campaigns.

Voters will be casting their ballots not just for the two open races; all five seats are up for grabs because of a high-profile recall campaign targeting the three conservative members that make up the board majority.

Two years ago, Julie Williams, Ken Witt, and John Newkirk swept into power on a platform of school choice, fiscal responsibility, and transparency.

“We’ve done exactly those things,” said Witt at a debate in Conifer. “The best way to have no conflict is to do nothing."

Witt cited district-wide ACT scores that show 55 percent of students are not college and career ready. That "is not good enough," Witt said.

He tells the attentive crowd the board is addressing this problem by expanding the number of independently run charter schools and equalizing their funding with traditional public schools. And teachers are now given raises according to how well they perform in the classroom, not on experience. Changes like that, he said, are hard for some.

“If those kinds of changes require some conflict to do the right thing for students, it is worth it,” Witt said.

Soon after the board majority was elected, resistance and conflict came to define JeffCo school politics.

Twelve-year superintendent Cindy Stevenson – popular among teachers and parents – resigned. The board hired its own private attorney. And the tone and atmosphere at meetings became more acrimonious.

Early on, a proposal that called for changing the history curriculum to make it “more patriotic" and place more emphasis on the “positive aspects of American history” sent thousands of high school students into the streets. The protests garnered national media attention. 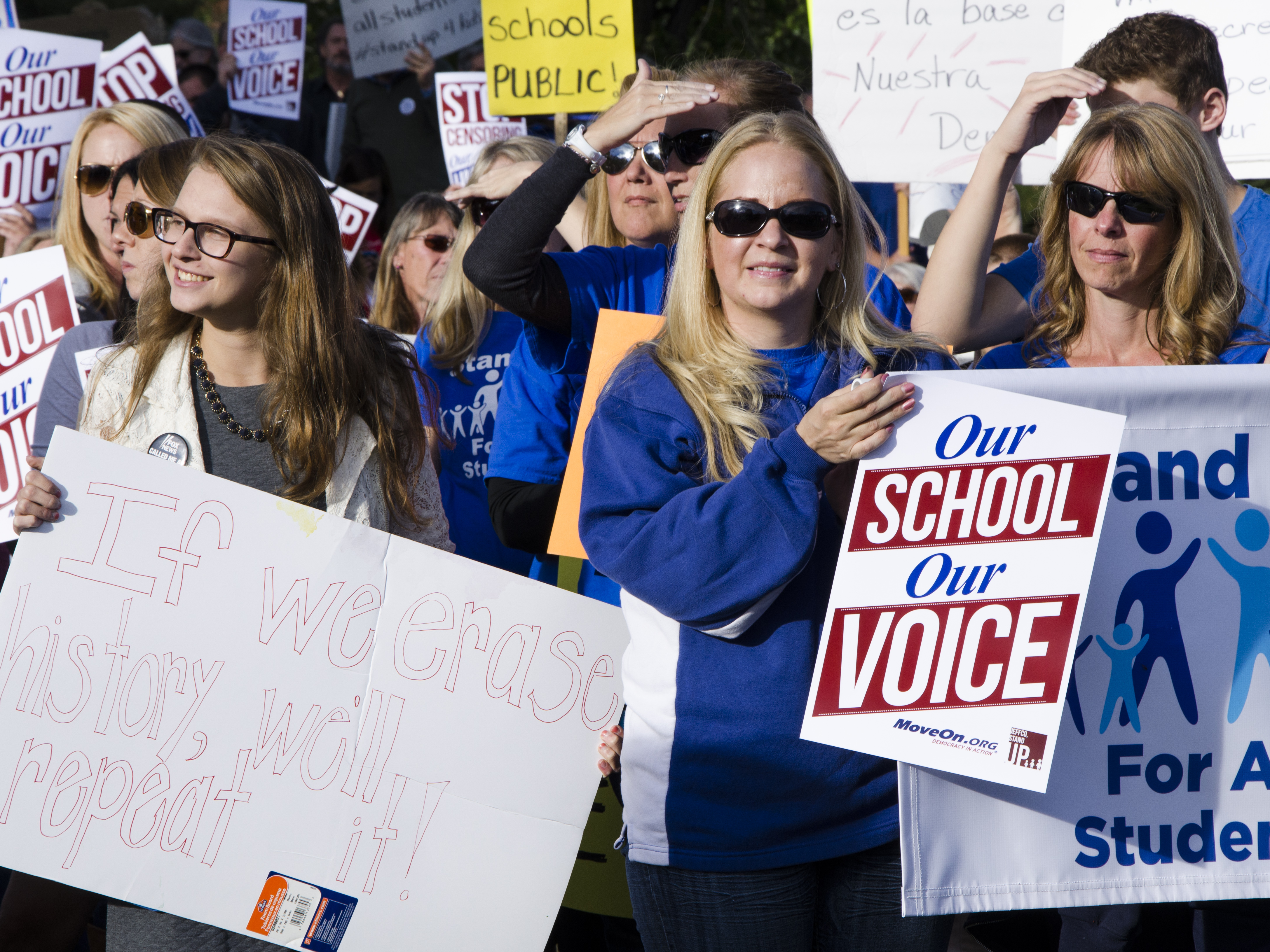 Contentious contract negotiations with teachers, a new pay for performance pay plan, and the board’s budget decisions have added to the storm and the high-profile nature of the race.

In all the debates leading up to November’s election, one question propels JeffCo school board candidates to sum up their platforms – do they or don’t they support the recall?

Brad Rupert does. This is why he wants to oust Williams, one of the board’s majority members.

“I support the recall because we have to stop the loss of extraordinary teachers and leaders in our schools," he said. “We need to eliminate the politics and the hostility and friction that goes on in these meetings. If any of you have seen these board meetings, they are dysfunctional.”

JeffCo board meetings these days are punctuated by bitter barbs, veiled insults, and a deep philosophical divide.

“The number one reason I support the recall is the lack of respect,” said candidate and teacher Ali Lassel, who is running for an open seat in district 3. “We have to get rid of disrespect, it’s poisonous,” said Susan Harmon, who is running for John Newkirk’s district 2 seat.

Candidates vying to unseat the three say what’s happening on the board goes far beyond conflict, it’s political and it’s shutting out parents, teachers, and students.

Candidates Rupert, Lasse, Harmon, Amanda Stevens, and Ron Mitchell are five candidates who are ideologically different (four are reported to be unaffiliated), but are running as a slate to oust Williams, Witt and Newkirk.

“By pooling our resources, we can combat the big money that’s coming in on the other side of this election,” said Mitchell. “We have our district on the brink of disaster. Teacher attrition is off the charts high. This board is ignoring community input. They are engaging in weak fiscal management and they have a hidden agenda. We the people will push back.”

And Benson said: “This recall made it on the ballot with knowingly false and malicious statements.” She is referring to claims by recall organizers that the board majority has violated open meetings laws by hiring a private board attorney behind closed doors and not making all emails public, charges incumbent Witt strongly refutes. Benson is however, a candidate for incumbent Witt’s seat.

Race Pushes Community To Get Involved

Anger and frustration is playing a central role in the current race. But it’s a difficult race to follow in terms of where the candidates stand on the many issues. Thirteen candidates are running for the five spots. And they have a variety of views from whether full-day kindergarten should be free for all kids-- to how to address overcrowding in the district.

But all the new candidates agree on one thing -- the tone of school board has to change. Many in the community agree on that point, and it’s driving some to get involved in the campaign. 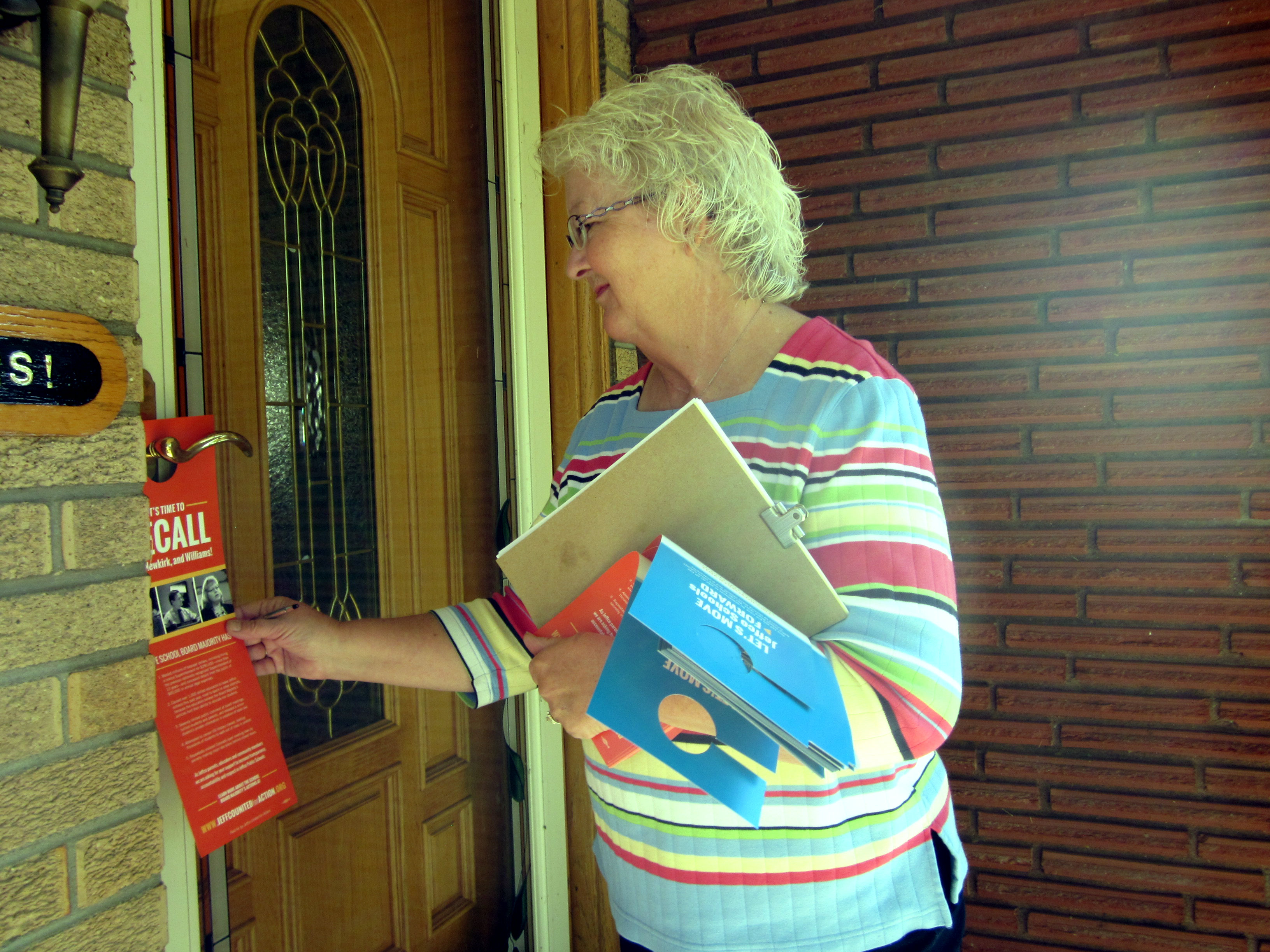 On a recent Saturday morning, grandmother Arlene Glatthar knocked on doors for JeffCo United -- the organization behind the recall campaign. There are many things that concern Glatthar about the current board including its emphasis on expanding a certain type of school.

“What I perceive is moving away from public schools and moving toward more privatization of schools; more charter schools that [are] not necessarily run by parents but are run by for-profit companies,” she said.

The school board is considering a charter application by the Doral Academy of Colorado, which has ties to Florida-based for-profit charter management company Academica that was audited by the federal government.

On the other side, Americans for Prosperity, a conservative advocacy group, has organized volunteers to go door to door. Another group, JeffCo Students First organized a few recall opponents Saturday on a bridge over Wadsworth Boulevard that connects two shopping malls. They plastered neon signs “Vote No on Recall,” on the bridge, visible to thousands of drivers below. 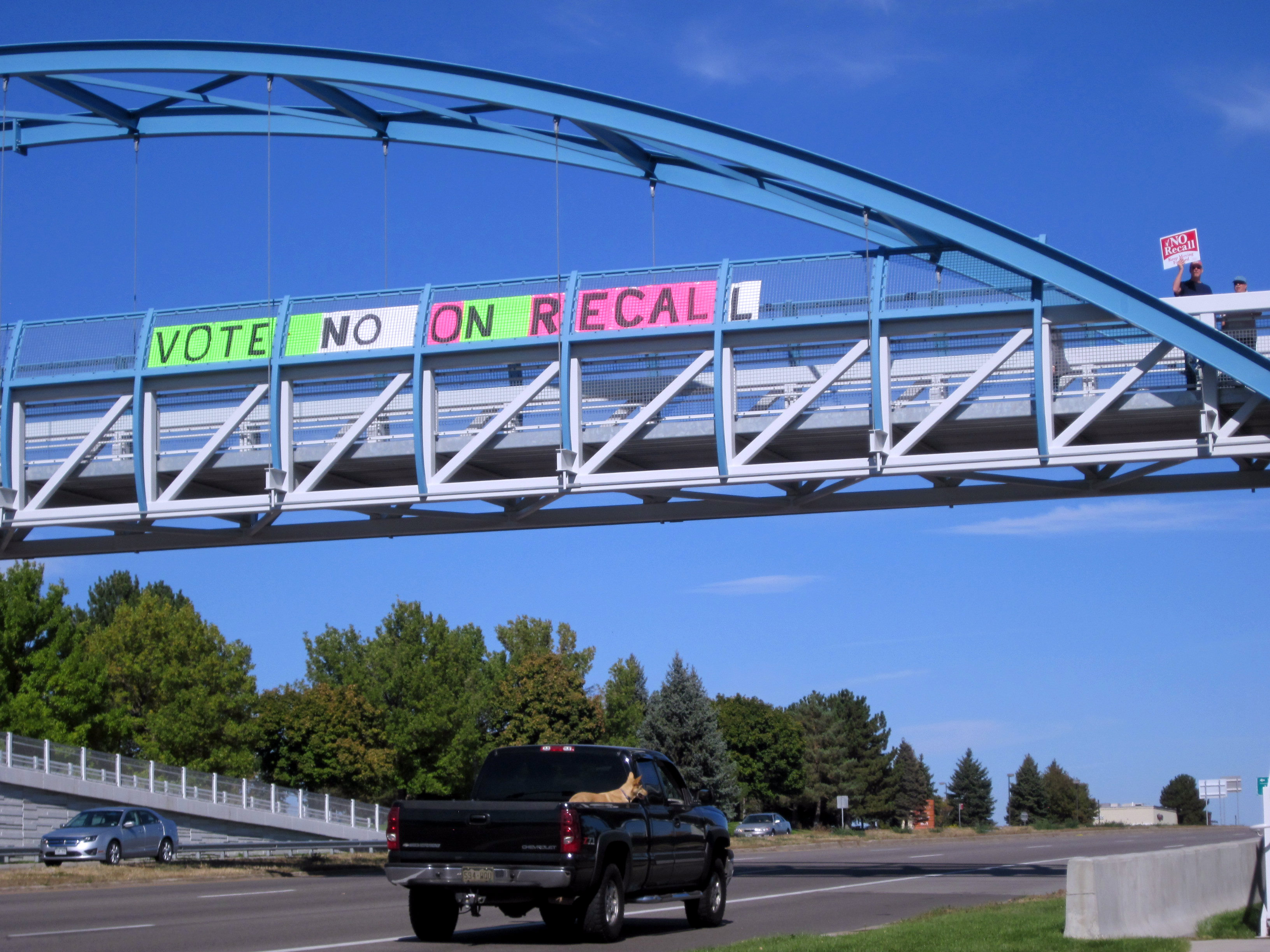 “I believe what they’re doing what they were voted in for,” he said. “There are rewards for the teachers on performance, they have fiscal responsibility and the way they have conducted themselves is above reproach. All the meetings have been in the open and public and I applaud their efforts.”

A new pay plan approved in August riled teachers. It makes teachers raises contingent not on experience but performance in the classroom, including student tests scores.

It’s an issue that spurred 25-year veteran teacher Ali Lasell to run for one of the open seats. She said teachers needed to be part of creating the plan.

“Pay for performance cannot be punitive,” she said. “It cannot pit teachers against each other.”

She said that’s why 15 percent of teachers left JeffCo this year compared to 10 percent last year. But on talk radio 630 KHOW – conservative incumbent Witt downplayed the charge that teachers are leaving in droves.

“Our mobility rate, our turnover rate, is in fact lower than Denver, is lower than some of the surrounding districts that are similar to us. So it is completely specious to say that it’s excessive in JeffCo,” he said.

Some of the challenger candidates do support pay for performance, but say the current plan needs work and teacher buy-in.

“The problem with the current plan is it is hard to differentiate between an effective and highly effective teacher and that’s where some of the competition concerns are centered on,” said candidate Kim Johnson.

Most believe the pay plan should be revisited to make ensure consistency and fairness. The board increased the top pay scale for teachers and raised beginner teachers’ salaries. But because of several years of pay freezes, beginner teachers are making the same as a seven-year veteran teacher who is rated highly effective.

Incumbent board members are proud of the new, shorter 10-month teacher contract, which they call “more nimble” and the new pay model.

“When an employer looks at their employee, they’re going to look at [performance]” said Williams. “I don’t get a raise if I’m not doing my job and doing it well and I think that teachers should be held to that same accountability.”

Other issues are bubbling up on the campaign trail. The conservative majority argues its expanded access to kindergarten; opponents say it hasn’t done enough to help fund full-day kindergarten for those who can’t afford it. The incumbents tout they paid for a new school with $18 million in operating funds, not a bond. Opponents describe school overcrowding and say a long-term building plan needs to be in place.

But amidst all this back and forth on the issues most of the new candidates agree on one thing - the public is being shut out.

“This is a dysfunctional board and its leadership is not listening," said candidate Brad Rupert, who's running for Williams' seat.

"We need to work on consensus, not hostility,” he said at a recent debate at Rooney Ranch Elementary school.

“The problem with the current board is the ram and jam,” said candidate Paula Noonan, referring to decisions she believes where made without community input. Noonan was previously a board member from 2009 to 2013. “What I’m seeing is a top-down autocratic method of pushing an anti-tax, pro-competition agenda on the district. They’re pushing that on a democratically founded enterprise, Jefferson County schools, that is publicly funded and that is based on collaboration. You can see how these things cannot fit [together].”

But incumbent Williams disagrees. For example, she said contract negotiations were made public in Jefferson County before it became state law.

“That’s very important for the public to be able to see what’s happening instead of it being behind closed doors,” she said. “All of our board meetings are streamed that weren’t in the past. I think that’s being very transparent."

It’s up to the voters now -- whether the board majority retains its power or new candidates are the voters’ choice. All voters in Jefferson County vote for all five districts in the county regardless of where they live.

Click here for detailed information on where candidates stand on the issues.