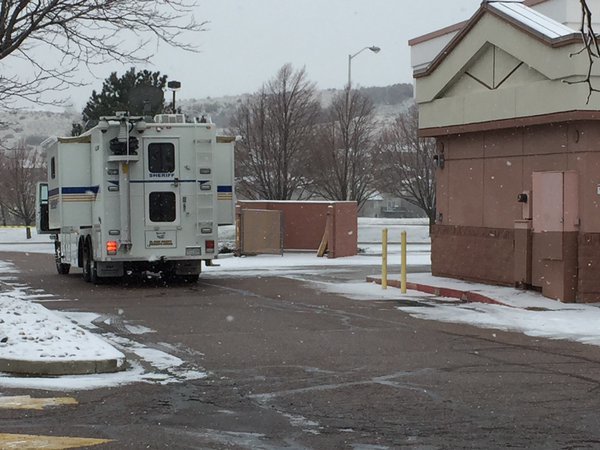 Eleven people were injured in the shooting, including five police officers, according to Colorado Springs police spokesperson Catherine Buckley.

However, the scene of Friday's shooting is expected to remain active for hours because of "items that the suspect took with him to the Planned Parenthood building," said Colorado Springs police spokesperson Catherine Buckley.

"This is not a stabilized scene," Buckley said. Shots had been fired "recently," Buckley added.

The situation is currently contained within the Planned Parenthood building where the shooting started, Buckley said. Police have not been "in voice contact" with the suspect, according to Buckley, nor have they confirmed his identity.

Police have not reported any fatalities at this time. Buckley said it is possible that a fifth officer has been injured, but she could not confirm that.

Gov. John Hickenlooper commended the bravery and courage of local law enforcement officers. They "have prevented a dire situation from being far worse, and we are all grateful," he said.

Read on for previous coverage.

Police say that four officers have been injured during the shooting at a Colorado Springs Planned Parenthood office.

At this time, it is not known how many civilians have been injured, according to Public Information Officer Catherine Buckley. A local hospital, Penrose Hospital, has tweeted that their facility has received 5 patients.

Penrose Hospital has received a total of 5 patients. We will keep you posted as we learn more information. #CentennialBlshooting

The scene is still considered active at this time.

Police say the shooter is still at large and can't confirm where he is currently located but say he can't be described as "contained." A spokesperson says original reports are that the man is armed with a long gun.

The scene "is very active and we are working our way through it," Public Information Officer Catherine Buckley told media in a recent briefing.

Officials still aren't confirming whether anyone has died in the attack. They say they're currently trying to remove wounded people from the scene.

There are multiple reports of an active shooter at the Planned Parenthood office on Centennial Drive in Colorado Springs. At least three police officers have been injured along with an unknown number of civilians. It's not known if there are any fatalities.

Commander Kirk Wilson with the Colorado Springs Police Department says the gunman is "contained" inside the clinic.

"Now we just have to figure out how to stop him and, permanently, put an end to the threat," Wilson told media at a briefing shortly before 1 p.m.

At least one injured officer is still inside the facility.

Employees and customers in a nearby shopping plaza have been told to remain in place as the situation continues.

The Colorado Springs facility is operated by Planned Parenthood of the Rocky Mountains. The clinic's webpage says it offers an array of services, including abortions.