More kids have health insurance.  And the child poverty rate continues to fall.

Those are some of the sunny parts of this year's Colorado Kids Count report, an annual encyclopedic look at the state of child poverty in the state.

But, as the report's authors note, the economic recovery isn't reaching all families equally. Homelessness among students has risen dramatically. And there's still a big gap in the poverty rate between white kids and children of color.

Here's a closer look at some of the report's key takeaways: 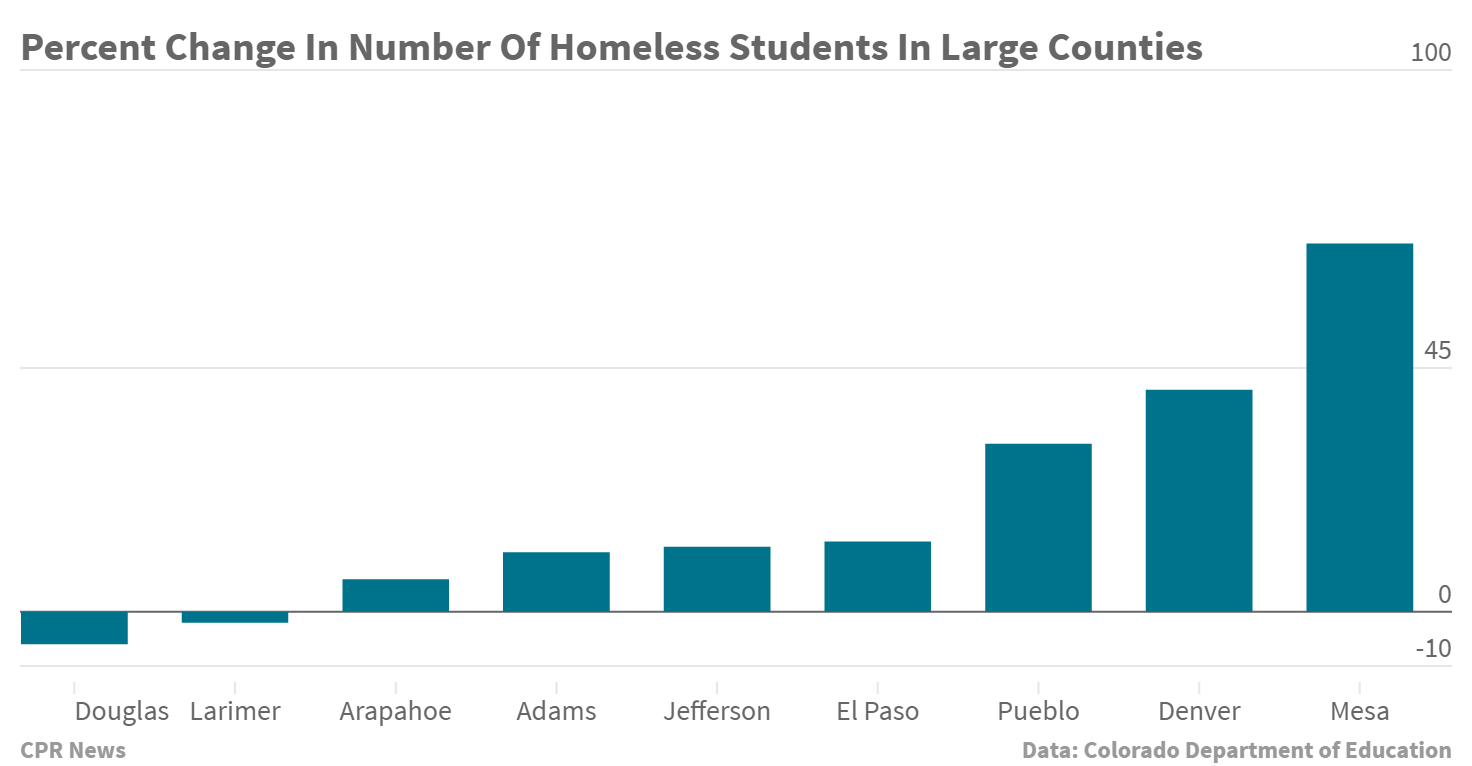 Between the 2013-2014 and 2014-2015 school years, the number of homeless students in Denver County increased by 41 percent, or approximately 924 students—an unprecedented jump. In fact, there were more homeless students identified in Denver Public Schools in 2014-2015 than during the height of the recession.

Statewide, districts reported 24,865 homeless students -- up by about 600 students from the previous school year. School districts say they are doing a better job of tracking homeless children, which could explain part of the increases. The uneven economic recovery and a big spike in housing prices could be culprits as well.

School District 51 in Mesa County reported an increase of more than 250 students.

"Our unaccompanied youth population is exploding," said Cathy Ebel, the prevention services coordinator for School District 51. "That is a huge issue for, I think, across the state and probably across the nation."

Grand Junction, the biggest city between Denver and Salt Lake City, has a lot of social services for rural areas, so it attracts a lot of families. Ebel said many families there deal with substance abuse, domestic abuse, mental health problems or severe economic stress.

"We have kids who are really leaving such chaotic and such difficult environments that they feel safer not with their families than with their families," Ebel said. "They are fleeing some pretty difficult situations. We have a large population of 'throwaway' youth that they just, for one reason for another, their parents decide they're done."

In some cases Ebel says some of the issues revolve around youth dealing with sexual identity. She says about a quarter of the homeless children in Mesa County are truly on their own, both homeless and not living with their families.  Some are living in a teen shelter, others are crashing with friends

2) Black, Hispanic children more likely to be in poverty

There have long been gaps in the poverty rate between different racial groups, and those persisted in 2014. 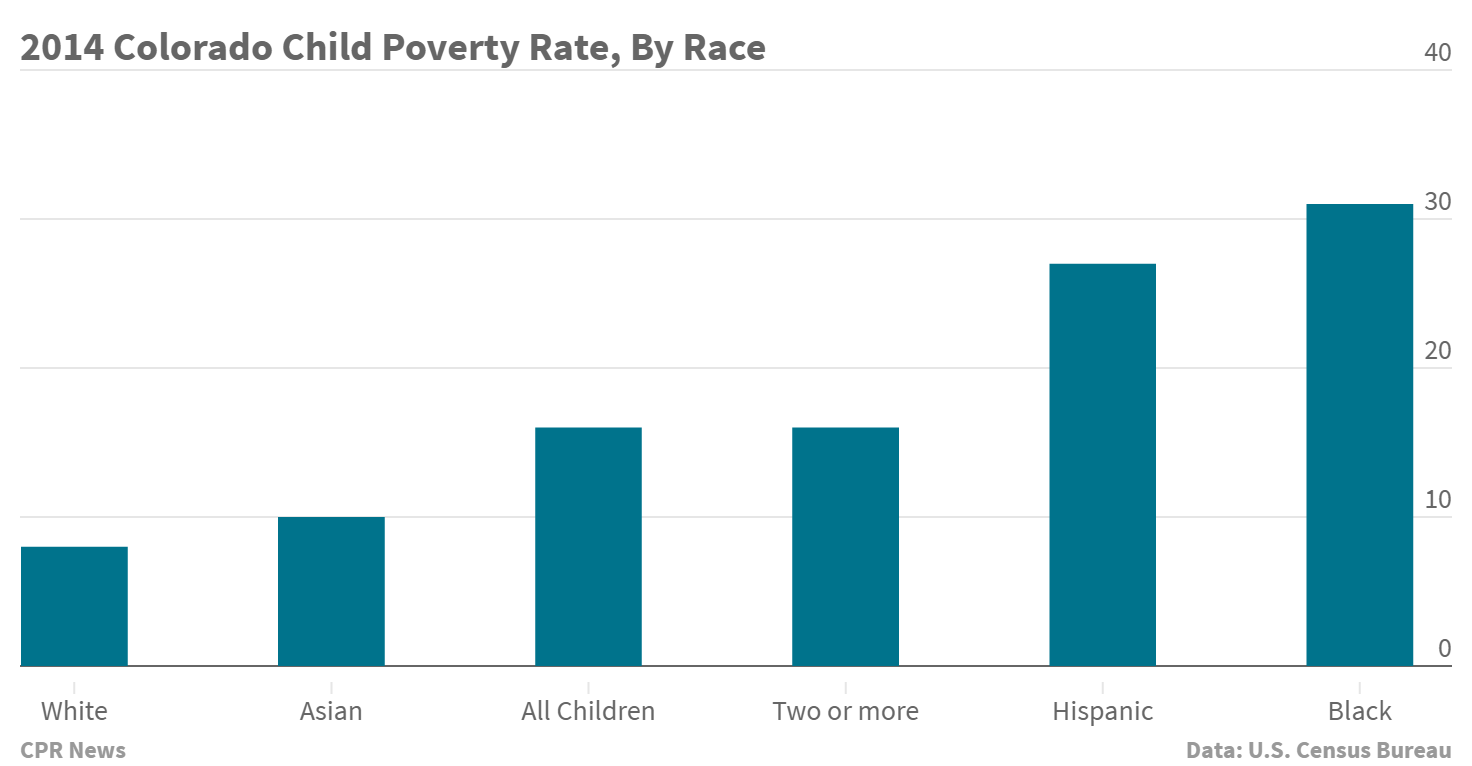 Black and Hispanic children were more then three times as likely to live in poverty, the report notes:

In order for Colorado to thrive now and into the future, our state must actively work toward ensuring all children have the opportunity to reach their full potential, regardless of their background.

3) Poverty rate north of 40 percent in some counties

The San Luis Valley has long has Colorado's highest poverty rates. That continued in 2014. 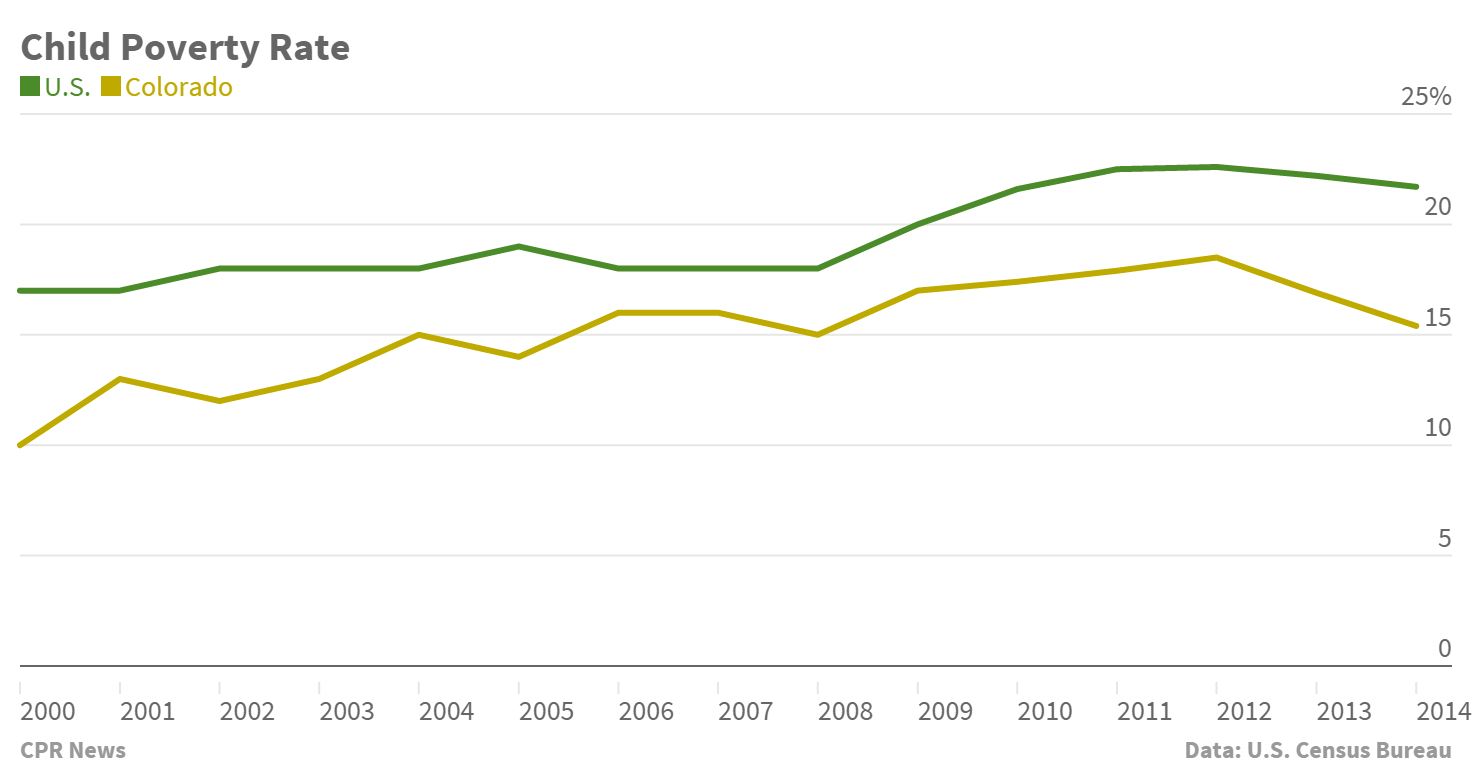 Although Colorado’s child poverty rate dipped below its pre-recession level in 2014, the child poverty landscape in Colorado looks very different today than it did in 2000, when only 10 percent of Colorado kids lived in poverty. Between 2000 and 2007, the percent of children living in poverty in Colorado soared from 10 percent to 16 percent—an increase of more than 100,000 children. During that time period, child poverty grew faster in Colorado than in any other state in the nation.

Colorado's uninsured rate for children was in the double digits just a few years ago. Now it's at 5.6 percent -- lower than the national average. The report credits state and community efforts to get kids enrolled as well as the implementation of the federal Affordable Care Act: