“How about red?” the 79-year-old Denver resident asks. The color has a special place in her memories.

Coker, who has early stage Alzheimer's disease, is working on her first graffiti mural. After a short workshop led by Denver graffiti artist Ratha Sok, she now knows that a tag is an artist’s signature. She also knows that graffiti symbols represent an artist’s character and personality.

“It could be the first letter of your name or a smiley face you’ve drawn your entire life,” Damon McLeese, executive director of the Very Special Arts (VSA) Colorado Access Gallery, tells nine graffiti novices. 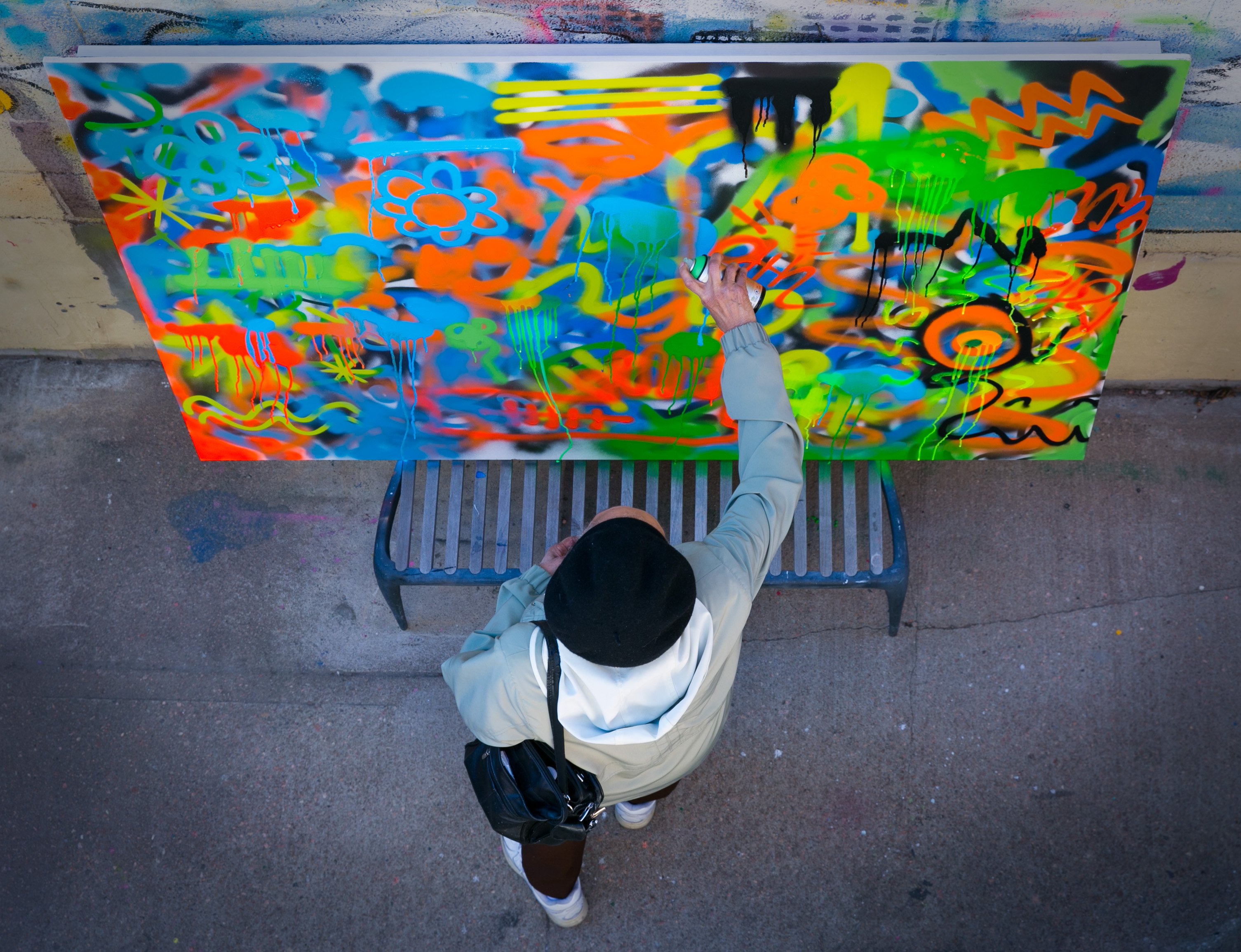 They're gathered for a new program called Granny Does Graffiti. The group is composed of Alzheimer’s and dementia patients along with their caregivers. The unexpected match makes some sense. For one, street art and memory are both fleeting.

“Graffiti is about leaving your mark, making sure somebody knows you were here,” McLeese says.

For Sondra Coker, that means using the color red.

“I painted my name, and I painted another name that my parents called me, which was ‘Red,’” she says.

When she was a young girl, her father once gifted her a teddy bear on Valentine’s Day. Its head was red. And she loved it so much that her parents nicknamed her after it. 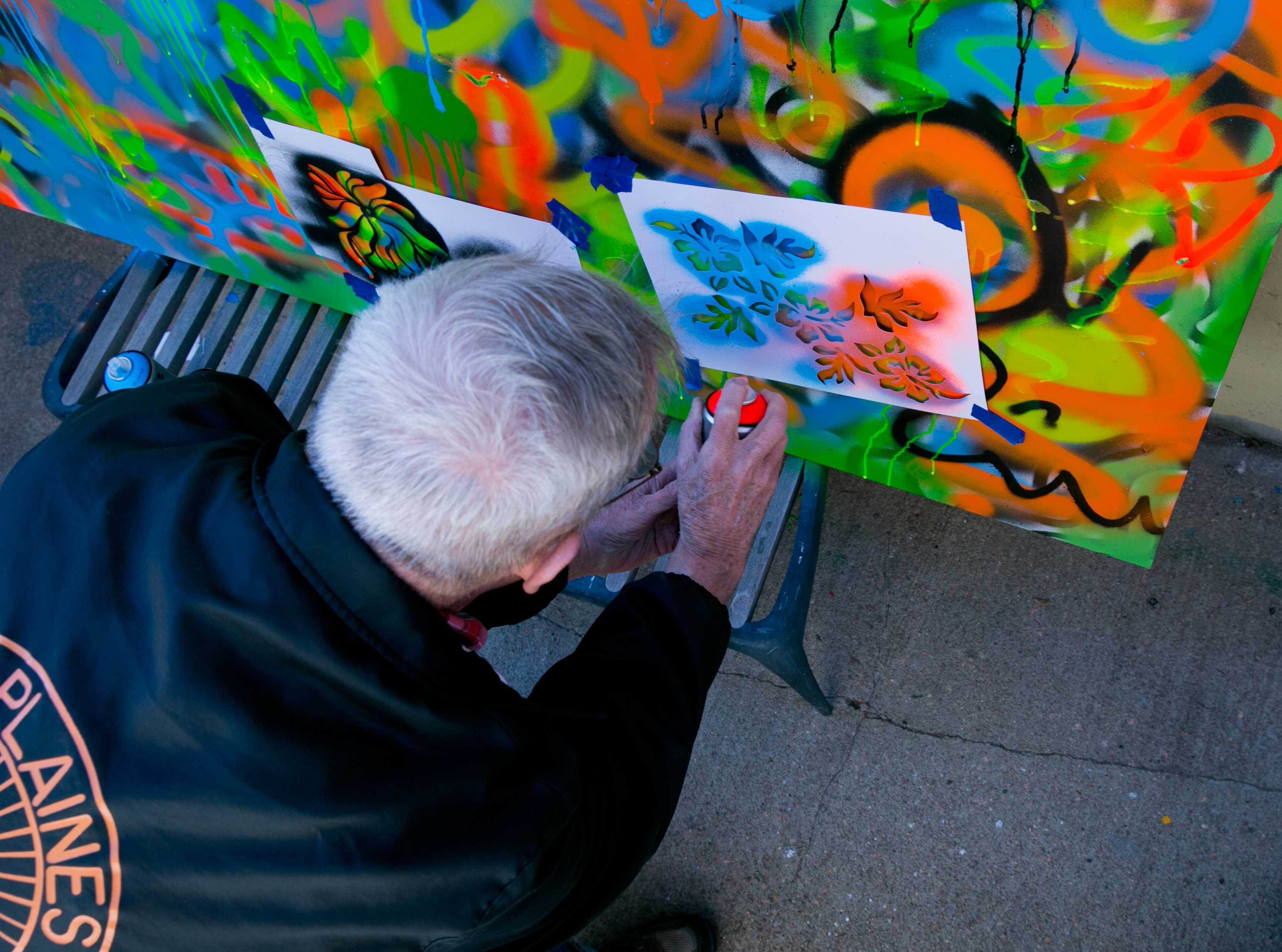 “We didn’t have any red [paint] here, but we used orange, we used blue, and we used green,” she says. “It looks almost like a garden in there with so much color.”

Coker sprays her tag on a canvas covered in images of flowers, glasses, cars and guitars. Although it's her first experience with graffiti, Coker says she has photographed, drawn, painted and knitted throughout her life.

“I think it’s part of the education of life -- you try things, you see different things,” she says. “You learn what is good, what is bad, what is colorful, what is bright, what is dark. Colors and art, you find it everywhere.”

VSA Colorado works to increase access to the arts for people with disabilities. The organization recently partnered with the Colorado Alzheimer’s Association’s SPARK! program, which connects cultural institutions to people who have mild memory loss, early stage Alzheimer’s or other types of dementia.

“We know arts can access different parts of the brain where words maybe won’t,” Kera Magarill, early stage service coordinator at the Colorado Alzheimer’s Association, said. “So participating in programs like this opens up memories and pathways in the brain for people to get creative, explore and engage.”

The mural will be on display at the VSA Colorado Access Gallery in Denver starting April 1. McLeese, whose mother helped inspire him to start Granny Does Graffiti, spoke with CPR News. 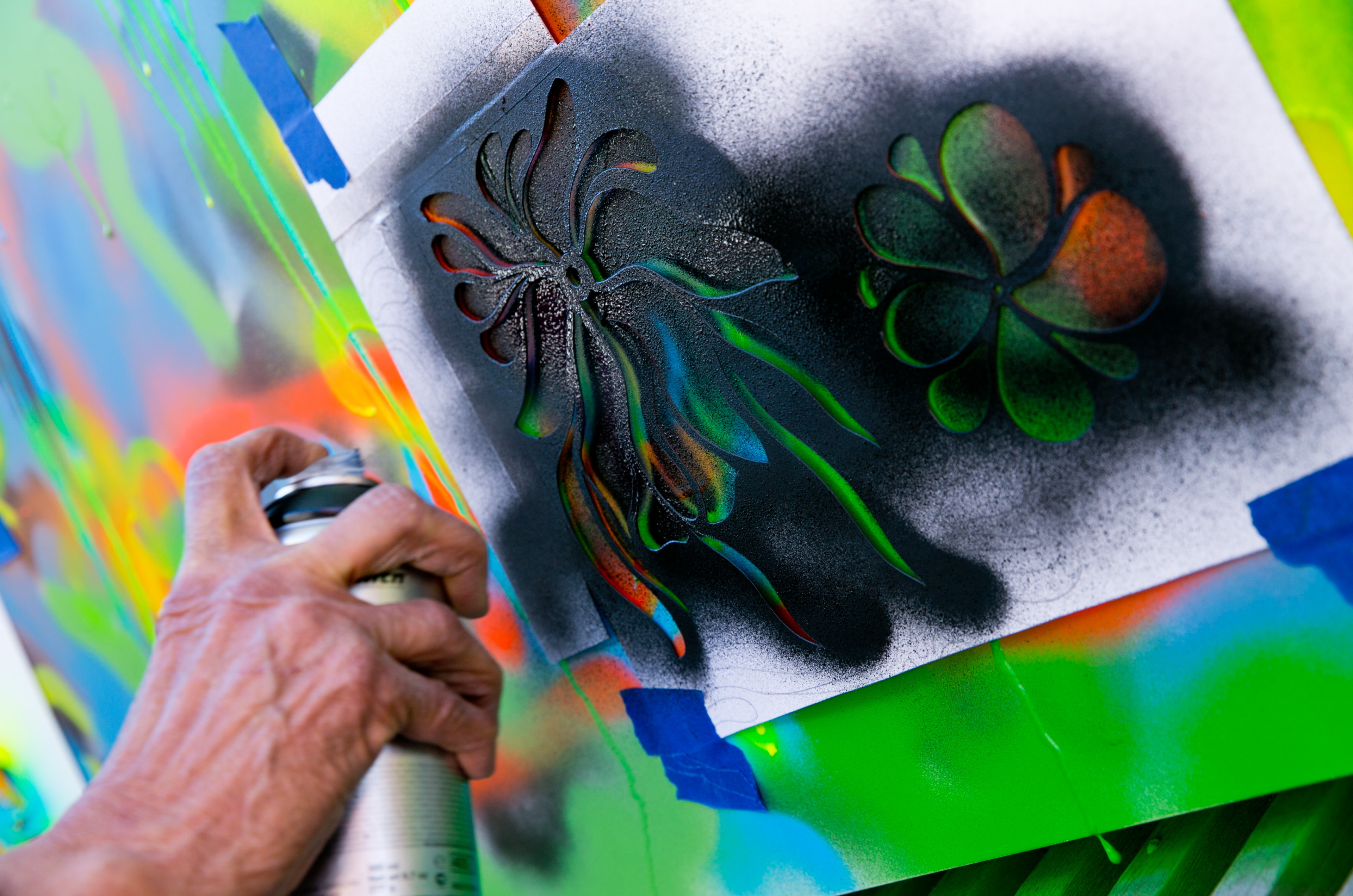 What prompted you to organize Granny Does Graffiti?

My mother just passed away last year. She was in the beginning stages of Alzheimer’s. She had some physical issues. One day I was visiting her at the nursing home, and I mentioned I was going back to the studio to do some work with the kids. She said, “I really wish I could come with you.” By that time, transportation was a real issue for her.

Throughout her life she was an artist, she was always painting and doing oils. At the nursing home, they were using children’s coloring books, and she was an adult. And that was the problem: She didn’t want to color cartoon characters.

My 90-year-old mother was still interested in creating artwork and trying new things. So I had this idea of bridging the gap between graffiti artists who I work with and people with Alzheimer’s -- who a lot of people don’t think are interested in new things.

How does the program work?

We partnered with the Colorado Alzheimer’s Association to bring down a group of people they work with and their caregivers. We introduce the artform of graffiti to them, talking about everything from tagging your name to color choices to using spray cans. We work with lines, shapes, colors and some stencils. And we created a mural that will be shown here in our gallery. It’s 6 feet by 4 feet. It really was a collaborative piece. 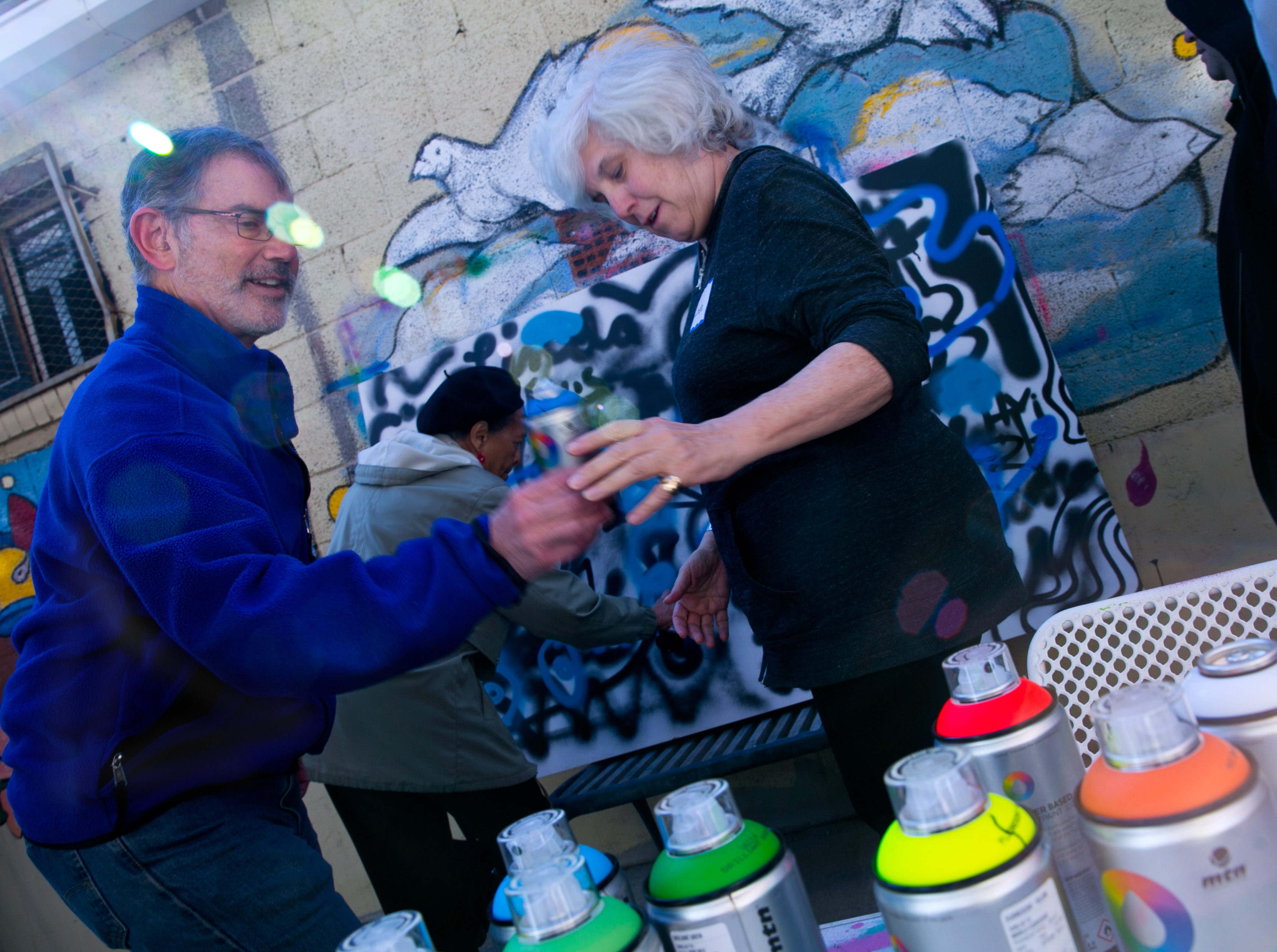 What are your aims with this program?

We start with the idea that graffiti is about leaving your mark. If you’re a person with Alzheimer’s or dementia, that’s probably crossed your mind. We want to make sure we’re remembered. We talk about making tags, shapes and symbols to represent ourselves. 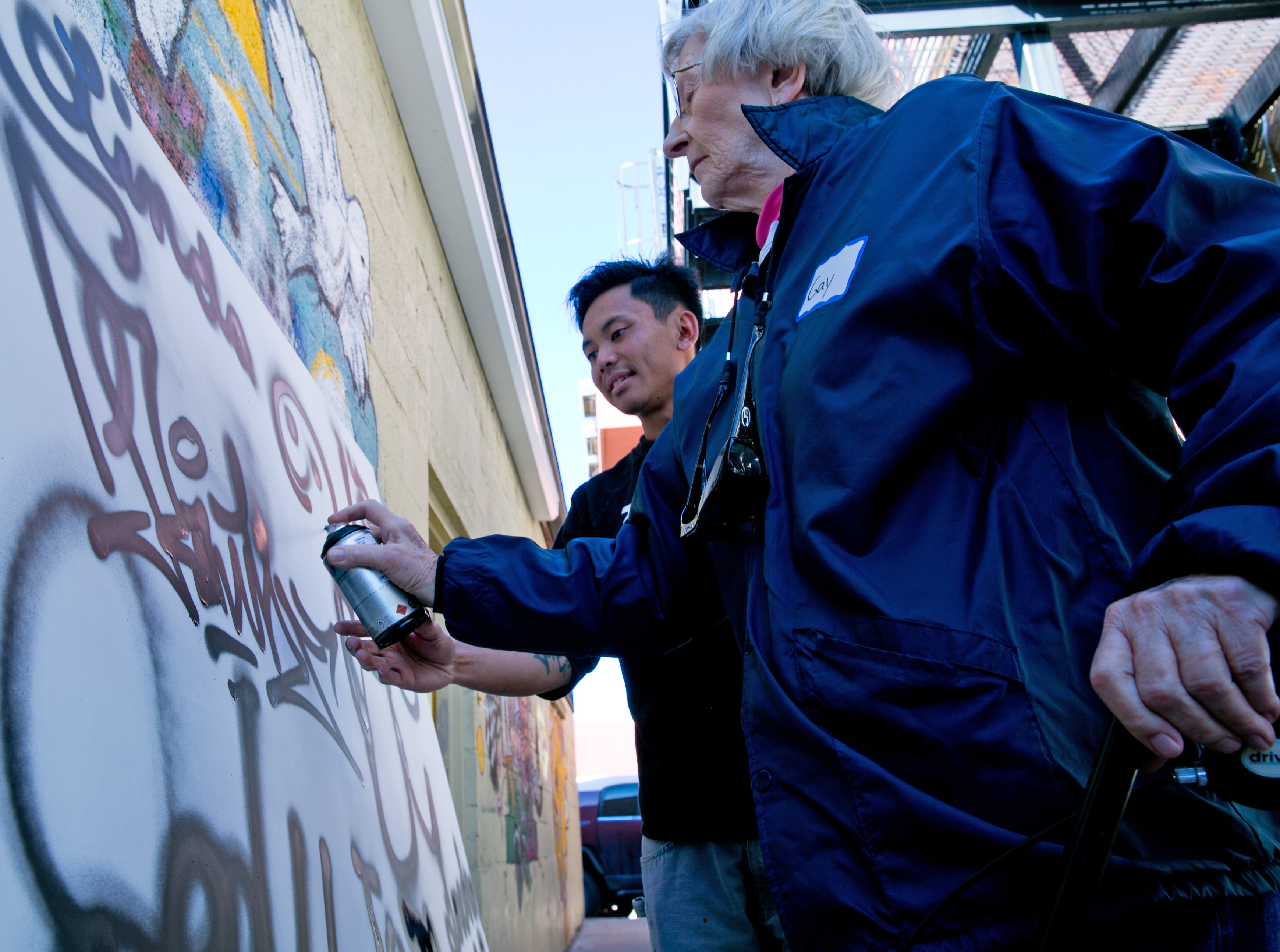 During our first session in August at Highpoint Assisted Living Community in Littleton, we had a gentleman who went up and painted a train caboose. It turned out he had worked on the Burlington Northern Santa Fe Railway, but some of the people that worked with him at the facility didn’t know that. One of his relatives was there that day and said he worked on the railroad for most of his career. The fact that art opened up that memory for him was pretty astounding.

Is there a research component? How do you measure the impact of Granny Does Graffiti?

Not at all. In order to get some sort of data, we’d have to do it more. And I think we will. We could go back and do a more formal evaluation if we do it on a more ongoing basis. This is a brand new program, so we really don’t know. I think it’s too soon to see what the impact is, but we’ve already talked about doing an ongoing thing.

What else can you share about the upcoming exhibition?

The theme for this mural really focused on the idea of spring, flowers and rebirth. Starting April 1, we’ll have a show called “Connect/Disconnect.” We have paintings by Denver artist Karen Fisher. She did a series with her father, who has Alzheimer’s. Those paintings involve flowers and hands, so we wanted to augment that with our mural. And that’s why the flowers and spring colors were so important to us.

The exhibition “Connect/Disconnect” runs at the VSA Colorado Access Gallery in Denver through May 6.