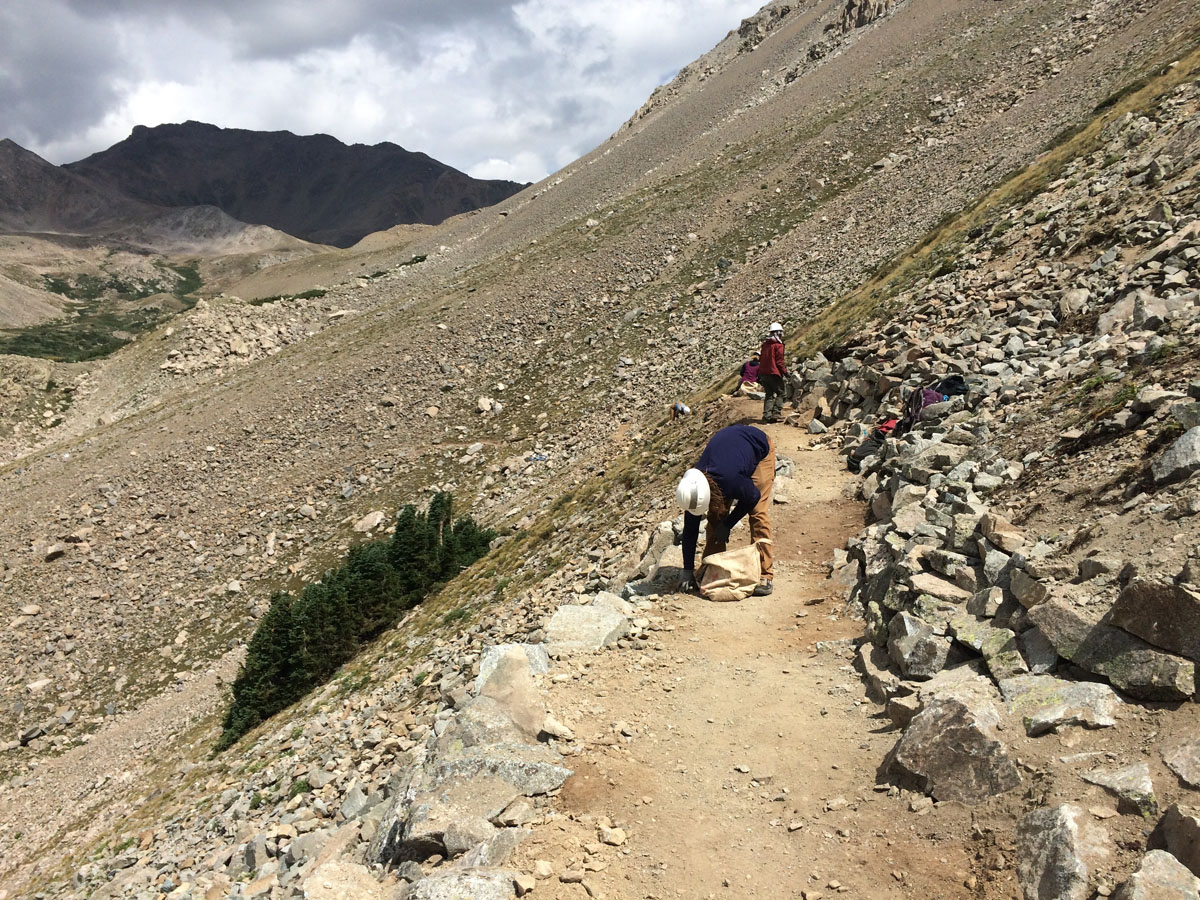 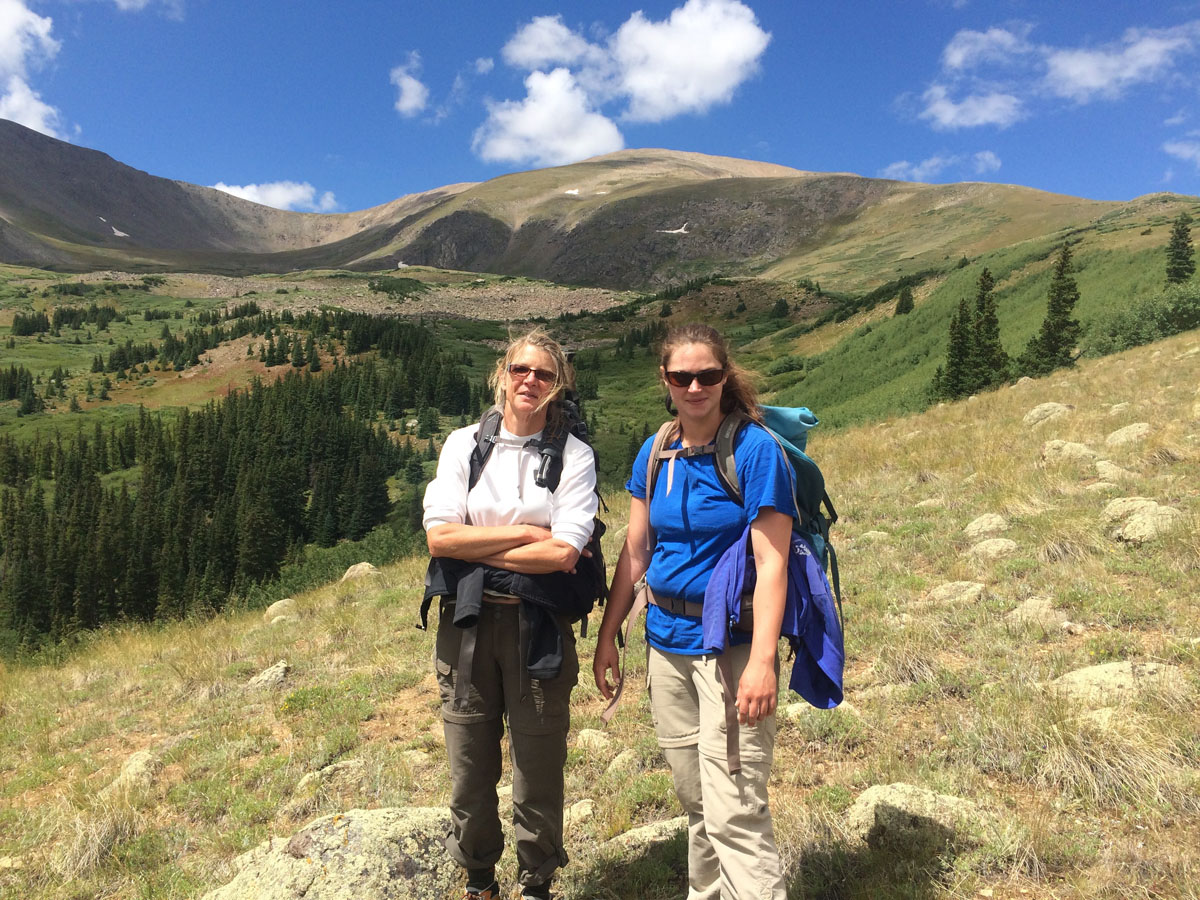 Dana Cronin / 91.5 KRCC Loretta McEllhiney, USFS Peak Manager (left), and her seasonal employee on Mt. Elbert. McEllhiney says she can think the most clearly on a hike.

Colorado is known for its iconic 14,000-foot peaks, more commonly known as fourteeners. Despite their majestic appearance, these high peaks have a fragile ecosystem and it takes a considerable amount of effort to keep them in good condition.  The season is over now, but for about five months of the year, crews work to create and repair trails.

Eli Allan is a crew leader for the Colorado Fourteeners Initiative (CFI), a non-profit founded 22 years ago to help protect and preserve Colorado's high peaks. It's the early afternoon, and Allan stands at an altitude of almost 13,000 feet, working to position a 600-pound rock as a single step in a staircase leading up to the summit of Mount Columbia.

Further along the trail, Meg Reeves, another of CFI's crew leaders, pushes rocks down a steep slope for use in constructing a wall.

"We have to find rocks that we think might work, and then we have to make them fit into where we need them to be," she said.

"Working on fourteeners is much like a bumper sticker I once saw from an outdoor company where it said, you know, 'My best vacation is your worst nightmare,'" he said.

Maintenance crews often wake up around 3 a.m. and hike to their work sites to avoid late afternoon thunderstorms. They work eight-hour days at high altitudes and with heavy equipment.

The goal, Athearn said, is to build trails that will encourage recreation but also help protect the ecosystem.

"If people step on the plants it can kind of crush their cells and with some plants, stepping on them as few as five to ten times can kill a plant," Athearn said.

Another organization working to maintain Colorado's fourteeners is the Rocky Mountain Field Institute (RMFI). The group performs maintenance in the Sangre de Cristo range as well as on Pikes Peak.

"In 100 years that trail will still be there, drainage impacts, environmental impacts will be minimized, the tundra will be protected, and that's what we want," she said. "It's hard work, it's slow work, it's expensive work, and there's just truly RMFI and CFI in the state that are leading the charge on these fourteener projects."

There's one USDA Forest Service employee who also plays a vital role in the upkeep of these high peaks.  Loretta McEllhiney coordinates with CFI and RMFI and her job is to design summit trails and provide the instructions to construction crews for all 14,000-foot peaks in Colorado, about 54 in all. Aside from her seasonal assistant, she's essentially a one-woman show. She said the job is time intensive, but that's fine by her.

"I have great passion for this work and I don’t mind putting in the time," she said.  "Look where I get to be."

McEllhiney called the alpine tundra--the space above timberline--a magical place. But, she said it's difficult to balance her love for the delicate environment and her support for public recreation.

"If we had all the money in the world and we could harden these routes up the fourteener to withstand more and more and more people, it may not break my heart as much to see, because we wouldn't see the resource damage," she said.

However, McEllhiney said that's just not the case.

Work on any single fourteener can cost hundreds of thousands of dollars with money coming from grants and other donations. CFI's Athearn said his agency's budget this year was around $1.1 million to pay about 23 salaries and provide amenities for crews up on the peaks.

Despite the cost, Athearn doesn't really see an end to the need for fourteener maintenance.

"We will always be doing fourteener stuff until people stop climbing fourteeners, which, I'm guessing based on past trends, is not going to end any time soon," he said.

CFI recently put out a report [.pdf] showing last year there were 260,000 individual hikes taken up the state's fourteeners. And after two decades of work, Athearn said CFI is only about two-thirds of the way to ensuring every fourteener has a sustainable route to the top.