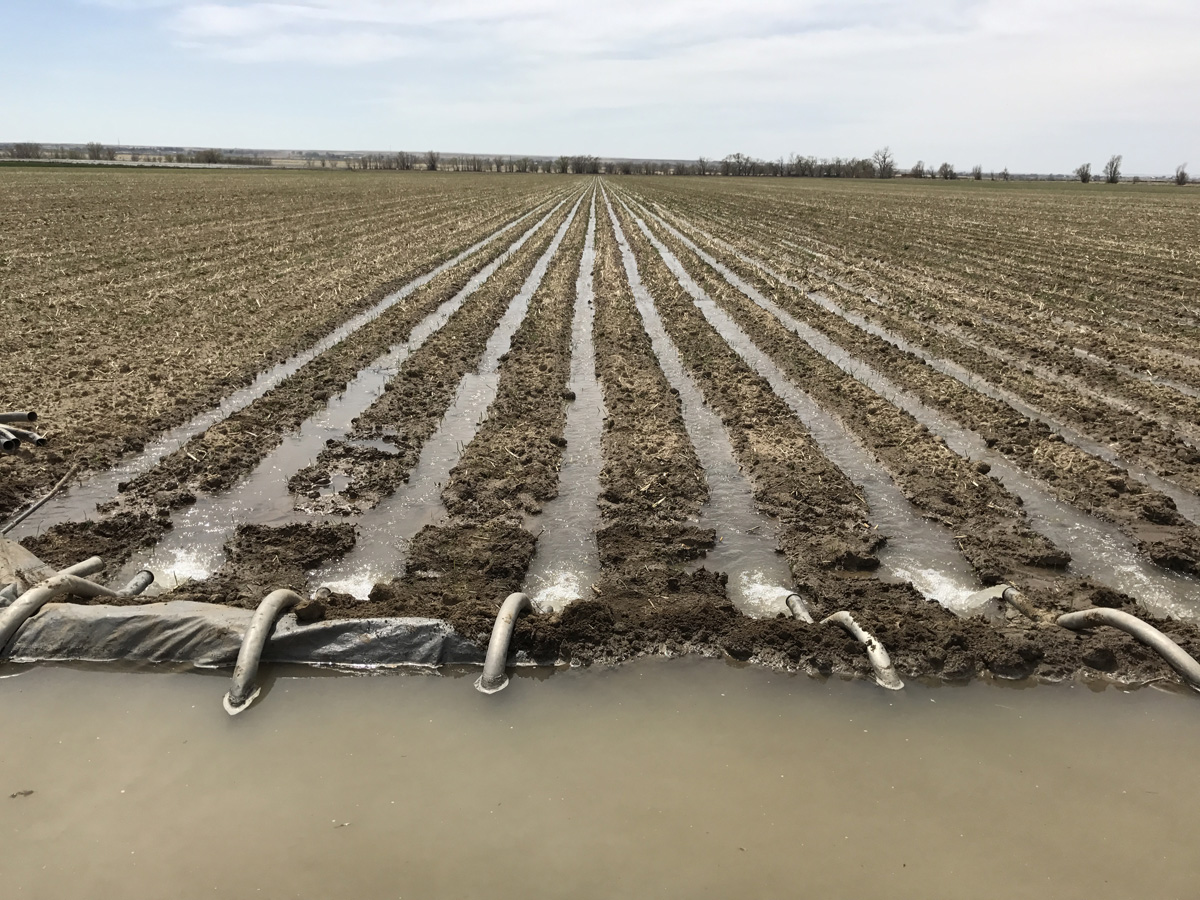 Dana Cronin / 91.5 KRCC Matt Heimerich's field of oats and triticale in Crowley County is being flood-irrigated with water from the Colorado Canal, which draws from the Arkansas 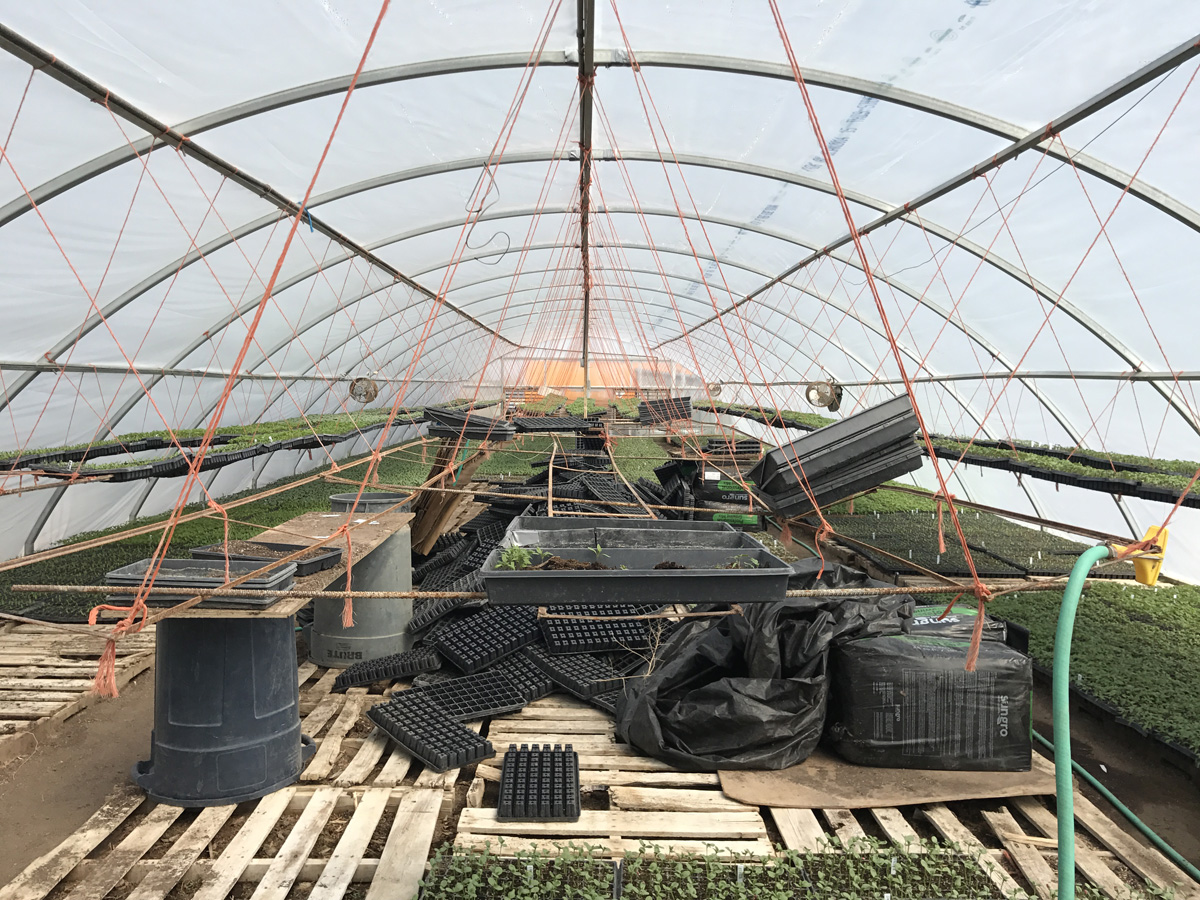 Family farms line the southern reaches of the Arkansas River in Colorado. The agricultural community there depends on the river's yearly flows for crop irrigation. But with predictions of less water in the future, the region could face tradeoffs over the coming decades.

Matt Heimerich is one of a handful of farmers left in Crowley County after many sold off their water rights back in the '70s and '80s. He stands at the edge of his 500-acre farm, flood-irrigating his field of oats and triticale, a hybrid of wheat and rye.

"There's 700 gallons a minute of water right here maybe, or 650. So there's a pretty good head of water," Heimerich says.

The water comes from the nearby Colorado Canal, which branches off the Arkansas River well east of Pueblo.

Heimerich is also the Conservation Director in the Lower Arkansas River Valley for Palmer Land Trust, which has taken a special interest in protecting the region's farmland. Although Heimerich says he usually has enough water to irrigate his fields, he worries about the future of the Arkansas River and his canal.

"The Arkansas has challenges, I think it always has," he says. "It's essentially a huge watershed, but quite frankly, the resources are somewhat limited, and when we're not in drought, we're usually coming in or going out of drought."

"We have wet years and dry years and wet periods and dry periods and that will continue in the future," says Jeff Lukas, a researcher with the Western Water Assessment out of the University of Colorado-Boulder. "But any future dry year, or five year period, or decade, will have much worse impacts because of the warming."

Lukas says not only will droughts get worse with climate change, but higher temperatures will also cause reduced stream flow in Colorado's rivers, including the Arkansas. And agriculture, which relies on that water, is one of the major economic drivers in the Lower Arkansas River Valley.

At a farm outside of Rocky Ford, vegetables and melons are beginning to sprout with the help of drip irrigation, a system where water slowly drips directly into the ground and onto plant roots.

"I think we prepared for a future of less when we went to the drip irrigation," says Gail Knapp, the general manager of the family-run farm, Knapp Farms LLC. "We felt like we could still farm our ground with less water."

Gail's daughter, Alicia, is the farm's Food Safety Manager. The pair says drip irrigation is not only more water efficient, but also better suited for certain crops. But, they say, there's not a lot of incentive to convert. Gail Knapp says it's more difficult and more expensive.

Knapp Farms gets its water from four different canals off the Arkansas River and owns a mixture of senior and junior water rights. Although they've implemented the drip system for certain crops, they continue using the water-intensive flood irrigation method for others. Alicia Knapp says they have other time sensitive priorities to track before worrying about the potential impacts of climate change.

"Labor laws, food safety laws, minimum wage," says Alicia Knapp. "There's just a lot of different things that go into effect that the average consumer doesn't think has such a high impact on us, but they all play into effect."

Researcher and part-time farmer Mike Bartolo manages Colorado State University's Arkansas Valley Research Center. He says he understands why Arkansas Valley farmers may not be too concerned about the distant future.

Bartolo says it's hard to make long term plans, "when, as a farmer, you're really in a sense of survival mode and you really have to address what's immediately in front of you."

"Water is always going to be tight, and it's going to get tighter. I don’t think there's any doubt that that’s going to happen in some way, shape, or form. We could be deluged and have a tropical rainforest here but I doubt it," he says, laughing. "I think were going to be faced with increasing amounts of drought, wide swings in temperatures."

That falls in line with work from researchers like Western Water Assessment's Jeff Lukas. And, it's not hard to imagine what the region might look like with less river flow. Just take a drive through Crowley County.

Without many water rights left there, Heimerich says current residents rely heavily on a single correctional facility for access to full-time jobs.

He calls Crowley County the poster child of an agricultural community that's lost much of its water.

This concludes our three-part series that looks at the effects of climate change on stream flow in the Arkansas River. Revisit part I, "A Future With Less Water: Climate Change Along the Arkansas River," and part II, "As Climate Warms, Rafters and Fishermen Eye an Uncertain Future in the Upper Arkansas River Valley."