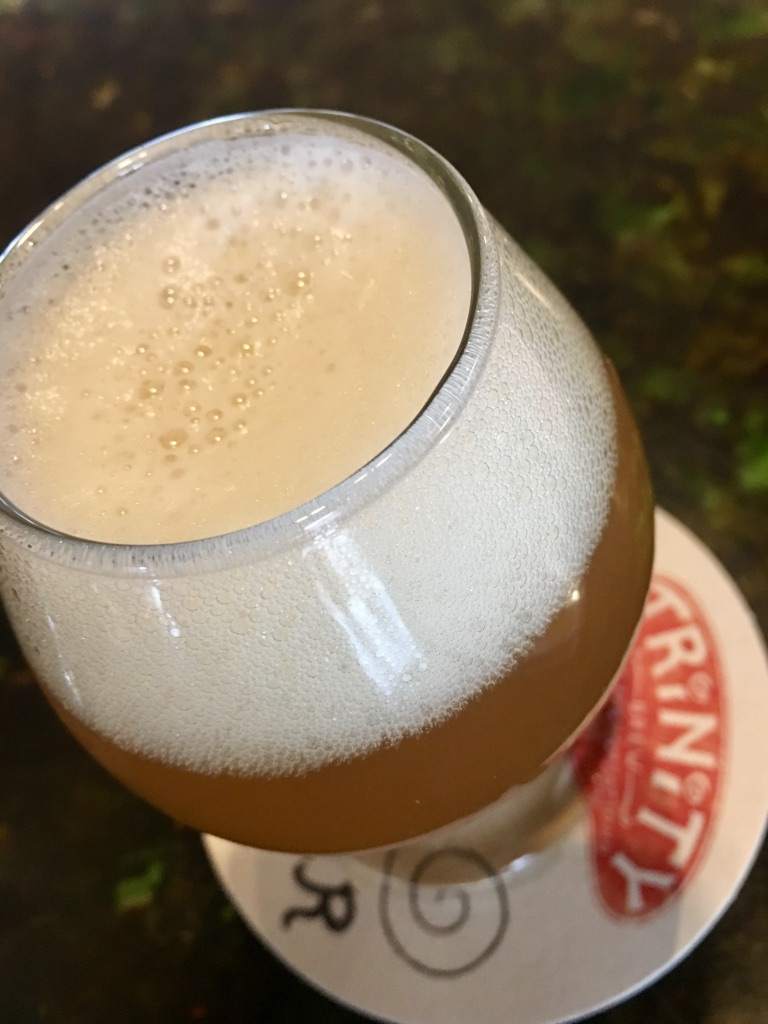 It’s no secret that Colorado Springs and TRiNiTY Brewing Company have danced in the past. But old news aside, whether you love ’em, hate ’em or feel indifferent, TRiNiTY brews some outstanding beer. And if you haven’t had the experience of their buttermilk fried bacon with blueberry maple dipping sauce…well you need it in your life.

Over the past month, TRiNiTY has had some of their most exclusive releases that owner and head brewer, Jason Yester calls, “some of the most interesting beers in the world.”

We sat down with Yester to do a tasting of the special tappings during which he breaks down the hoopla swirling around East coast IPA’s, explains some fancy beer language and talks about why we should get past the aesthetics of beer and embrace the haze.

We start with the Hype Forager, a hop-burst, East coast turbid style IPA at 6.4 percent ABV. Spiced with tangerine zest the beer showcases what Yester refers to as a “juicy, tropical structure.” TRiNiTY has made multiple batches, each aged on a rotating citrus harvest. This particular pull utilizes mandarin oranges, but with multiple run throughs they’ve experimented with Lisbon lemons and next up, Valencia oranges. A self-rise fermentation technique creates an intentional cloudiness and expresses a soft coconut note. “So the whole thing comes off tasting like a hoppy Pina colada,” says Yester.

“The mandarin orange Hype Forager is exactly what I wanted, and that was the very first one we ever ran,” says Yester. “But I still want to explore a little bit and see what we can tweak the recipe to be. Right now we’re learning these recipes and we’re a trial and error brewery. I don’t expect to get it exactly perfect on the first run, even though every once and while that happens.”

Yester says that he initially brewed Hype Forager as a joke due to the momentous push behind the “new” turbid style IPA but found an authenticity underneath it all.

“I think a lot of the techniques that are being done for turbid IPA were initially piloted by Oregon brewers,” says Yester. “New England championed terms like “hop-bursting” and procedures like “double dry hopping” that are really the mechanics that make a beer juicy.” So what exactly is hop bursting?

“Let’s say you have a 90 IBU beer, which is fairly hoppy,” says Yester. “Most people would load 70 IBUs at the very start of boil and do 20 IBUs at the end of boil. Hop bursting is exactly the opposite. You would do 20 at the beginning and 70 at the end. Now it takes a lot more hops to do it, but you get a nice, round flavor and it enhances the fruitiness of the beer. It’s a different approach to making IPA’s and I think within the last year it’s just starting to hit Colorado. I think the best example in town is Manitou Brewing‘s IPA. I think it’s probably the best IPA in the whole state, it’s that good.”

The punch line for Yester stems from the supposed “innovation” but the Pacific Northwest has been ahead of the game brewing these beers for twenty years without distribution to recognize their efforts.

“There’s such a wave behind turbid IPA’s right now,” says Yester. “There’s a little bit of science behind it, but a customer reacts to how it feels. It’s a big part of the sensation. Because of the thickness, because it looks like orange juice, your mind starts getting programmed to think that it’s going to taste juicy.”

After developing the recipe Yester says he fell in love with the style as he recognizes the similarities it shares with his beer of choice.

“It tastes like a blend between an IPA and a saison,” says Yester. “Even though we were trying to make fun of a style I guess old dogs learn new tricks.”

Cans of the Hype Forager will be available soon with the help of a contract with Pikes Peak Brewing. A mindful take two introduces Juice Killed the IPA. A doubled-up variation of “the Hype” but with a saucy boost up to 8.1 percent ABV. The current batch was aged on blood oranges and solicits ruby red grapefruit notes with an elegant texture.

“The guys from Weldwerks up in Greeley kind of brought this style to Colorado,” says Yester. “When you taste his turbid IPA versus a lot of different ones, his is very creamy and structured like this. Once I tasted his that’s what inspired me.”

TRiNiTY has a proprietary yeast courtesy of Boddingtons, the well-known British brewery, that encourages the creamy, island flavors many of his beers omit. Family member, John Boddington was the original financial backer for TRiNiTY and for that reason the pub ale has been on tap since day one.

To purposefully keep the beer cloudy, it isn’t cooled until the night before which allows the yeast to stay suspended. The unconventional color reminds us of shaking up a batch of margarita mix and no one complains about that prospect.

“The cloudiness kind of became to old-schoolers, something you shouldn’t do,” says Yester. “Like your beer should come off fairly clear, and if it doesn’t you’re rushing it. So there was a lot of criticism and there is such a disconnect.”

We think it’s a fair assessment to say that most people liken clarity to good beer but there seems to be a growing awareness among consumers that the two are not intertwined. So let your lids rest and take a sip.

“It’s nice that people are coming around and letting more flavor into the beer rather than just making the brewer wait for really no reason,” says Yester. “I’m starting to admire the movement a little bit because I love drinking those kinds of beers. What I like about it too is that all these small breweries that couldn’t spend $150, 000 on a centrifuge or $50,000 on a filter, they’re the guys who developed this style. So it really is very much American, driven by small houses and brewers who have passion but just don’t have a lot of money. Which I think, is something that I can definitely get behind and admire.”

The contempt around murky beer has been a long-standing issue at TRiNiTY “That’s one of the things we’ve struggled with as a saison brewery,” says Yester. “How do you get the pectin out?”

Would we expect every wine to be star bright? Hell no. Some are opaque and different varietals yield different hues. So why not extend the same grace to our beer.

“A Belgian brewer said that ‘time is an ingredient’,” shares Yester. “And that’s true for some beers, but not for all.”

Behind every great brewpub is a kitchen that cranks out some good food and TRiNiTY acknowledges that piece of the puzzle. Seasonal changes bring forward lighter options like the curried tempeh, caprese salad and vegan chickpea salad sandwich.  Heartier fare includes the Bourbon and maple glazed Brussels sprouts, Colorado lamb burger and the Philly cheese steak Mac. Our favorite summer option is the crispy pork belly and watermelon salad.

All of the beers Yester introduced are available and ready for Colorado Springs beer drinkers to draw their own conclusions. So if you’re worried about whether or not East Coast IPA’s are really Oregon IPA’s, why you can’t see through your beer or if late hop additions are where it’s at.