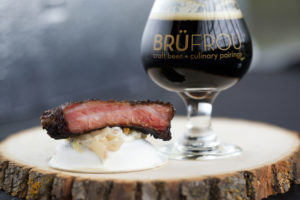 This Sunday, July 16, 12:00 p.m. to 5:00 p.m. the fourth annual BruFrouFest will be held in Denver, on the newly renovated quad in front of Tivoli Station. The largest pairing festival in the country includes a lineup of over 120 chefs, brewers and mixologists with the accompaniment of live music from six eclectic bands.

Co-founders, Myriah Conroy and John Heins, have a background in event production and designed BruFrou to be an avenue for premium culinary and beverage collaboration.

“We love to go check out different breweries and festivals but the one thing that was constantly lacking was the food,” says Conroy. “So we came up with BruFrou. The thing that is unique is that we bring together all these Colorado entrepreneurs and it’s a way for them to experiment. A lot of the restaurants will then start to carry the beer that they partnered with or tried.”

Colorado Springs has representation with the return of Bristol Brewing Company and Four by Brother Luck. A smoked buffalo brisket with Gunnison cherry barbecue sauce and pickled jicama is on deck to compliment the flagship Laughing Lab Scottish Ale.

“When I do beverage pairings I think about how the dish will continue the flavor profiles,” says chef Luck. “It’s a popular, approachable beer with notes of caramel, honey and a little bit of baking spice. It makes me want something savory and sour. We’re in the middle of cherry season right now so I thought how great would it be to bring that in with some barbecue. The jicama gives it a giardiniera feel and makes it a little Southwestern. This is the second year doing BruFrou and working with Bristol so we’re excited to push some Colorado Springs on Denver.”

The Buffalo comes down from Idaho Springs to share their big eye tuna salad with mango, mustard, pineapple and kimchi coupled with Westbound & Down Brewing Company‘s DIPA.

We plan to start the day with a matchup from the host city’s Fiction Beer Company and Glazed & Confused. A cream ale with bourbon barrel aged cold brewed coffee to wash down a mango cheesecake, graham cracker crusted donut hole.

Beer cocktails will also feature mile high based distillery Leopold Bros. and showcase the marriage between crafts. The ‘Biting Coachwhip’ has Odell’s Brombeere Blackberry Gose (one of our personal summer favorites) with Leopold Summer Gin, their American orange liqueur and salted rose.

Tents will be set up to host four pairings, each known as “party pods”.  In the center all the chefs will prep alongside each other. “They’re all interacting so it winds up being a big party,” says Conroy. “It’s not frenetic. It’s not a food or beer desert. It’s spaced out so you can walk up and down the field and bring festival blankets to sit on the lawn.”

“Because we have so many partners there are limited lines,” says Conroy. “You’re never hungry or thirsty because there are only three to four people ahead of you. It’s not a beer fest. It’s all about the pairing and how these are better together than by themselves, with the chefs and brewers on hand to answer questions.”

Tickets are available for purchase with the option to just chow down or to enjoy the full food and beverage experience. General admission costs $40 or $35 for food only. At the door prices are $50/$45. The VIP option includes additional access to more pairings and upgrades for $125 or $95 for just eats. Prices increase to $145/$115 the day of.

“The focus is Colorado and it’s really a celebration of these fast-growing industries here in our state,” says Conroy. “You can taste some of the best beers, try dishes from some of the best chefs, all on one day, under one roof.”