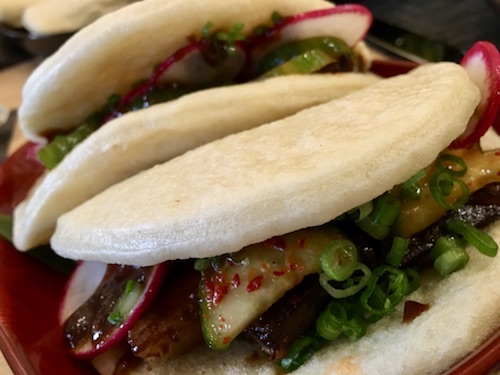 For Natural Epicurean to operate as the venue is “a little contradictory to the concept,” says David Patterson, executive chef at The Broadmoor. “But that’s the point of a pop-up, to get out of your normal skin and be someone else.”

NE stays true to it’s wholesome nature but inches towards a new opportunity to diversify The Broadmoor’s already vast collection of restaurants as it presents something fresh and different for the resort. RMFR had the chance to sample their well-rounded menu and discover the motivation behind the innovative extension.

Which leads chef Patterson to devise his own creative take, on not just the simplistic soup, but the entirety of the menu.“I spent a long time working in Hawaii and was heavily influenced by the Japanese culture and its presence in Hawaiian cuisine,” says Patterson. “I was inspired during those times and being that our location was in the middle of the Pacific, it was easy to vacation in Asia. Dining in Toyko is absolutely unreal, every block is packed full of restaurants. There are thousands of ramen shops and they’re all doing something different.”

“Japanese cooking is steeped in tradition but ramen is kind of a modern addition,” says Patterson. “So with that there’s less obligation to follow the “rules”. I’m fascinated by it and it’s really, really humble food. It’s broth and it’s noodles. To make that really fantastic and savory, at this point in my career, it’s more interesting to me than gastronomic cuisine.”

One of our favorite items, aside from the signature bowls, is the crispy Corner Post Ranch pork belly steamed buns (top image) which reflects the continuous evolution of Japanese dining.

“It follows in the same spirit as ramen and we’ve taken some creative liberties there as well,” says Patterson. “There’s a real modern touch with the ingredients and flavor combinations.”

Chef Patterson draws upon his island life as he voices a passion for working with seafood and features a number of dishes that incorporate his choice protein. Daily deliveries from Honolulu Fish Company, showcase the high quality with dishes like Kajiki toro tartare and Togarashi blue prawns.

“Most of the fish goes the opposite direction to Japan, so for us to get our hands on it and have it here is great,” says Patterson.

Chef Adam Thomas, executive pastry chef at The Broadmoor, is also well-traveled, even spending some time working abroad in Singapore. Sharing stories and reminiscing about their favorite dishes in Asia plays an instrumental role in their development of the sweets section. Although your mind may not typically dart towards dessert when you think of a ramen shop, The Broadmoor has found a way to interpret and refine the last course to make it a necessary part of the experience.

Our most notable call-out is the Kaya toast, a recreation of a typical breakfast pastry often served in Singapore and in Malaysia. “It’s more elaborate than what you would get at a coffee shop there but we wanted to make an elevated version,” says Patterson.

NE Ramen gives the chefs and guests at The Broadmoor the freedom to dabble in the rising trend of pop-ups. It provides a moment for something special and places an impression on the local food scene. Culinarians yearn for a break from tradition, new menu adaptations and a progression forward into unfamiliar territory.

“The pop up concept is that it comes and goes rather quickly and we wanted to seek out a few things that we knew were exceptional and have some fun,” says Patterson.

*NE Ramen will honor extended hours through the holiday weekend to include Sunday, September 3 and Monday, September 4. The pop-up will temporarily close Friday, August 18, for a private event, but will resume normal business hours on Saturday, August 19.